Full disclosure here, the game description states there is over 50 hours of content, and at the time of this review, I have put in around 5 hours of gameplay.  Should my thoughts change as I play more, I will be updating this review.

Preta: Vendetta Rising is very much inspired by classic Action RPG’s like Diablo and the Baldur’s Gate series of games, but also borrows elements from games like Dark Souls and the Dynasty Warriors franchise as well.  The world of Akirion has been infested by Preta’s, some vile monsters that plague the countryside’s killing any who cross their paths.  You take on the role of a mercenary and it’s up to you to not only save the populace buy maybe uncover the secrets behind this infestation and maybe something about yourself as well. 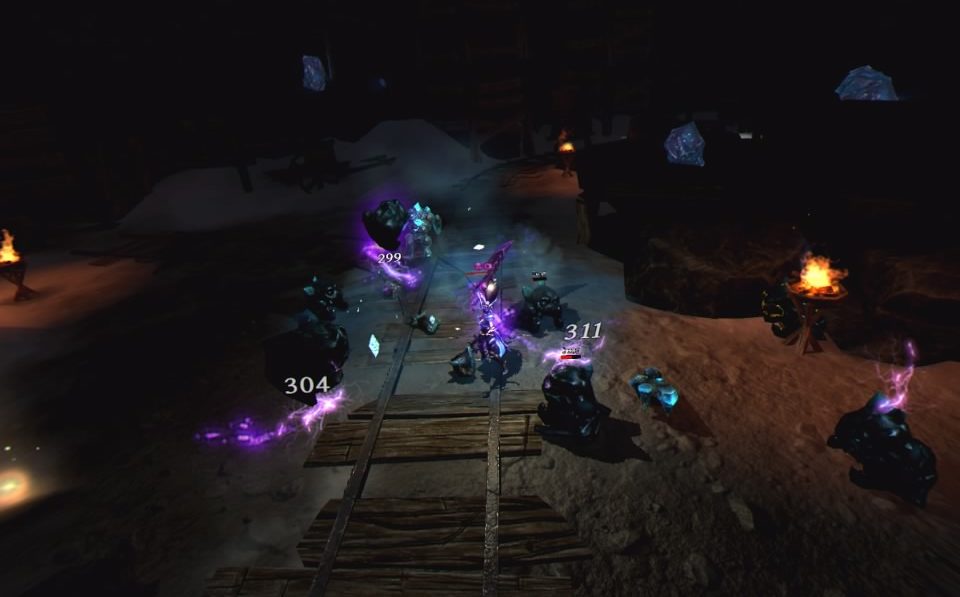 In every battle, the enemy does their best to surround you.

I was impressed by the quality in the visuals as they elicit a wonderful sense of scale akin to games like Moss and Theseus.  The stages carry a lot of detail and some stellar lighting effects that give the darker look of this game an almost haunting vibe.  No matter what stage I was in or even in the home village populated with people, I felt alone and that’s not a fault of the game as it added an emotional loneliness akin to games like Dark Souls.  Levels are large set pieces linked together by portals though the actual playable areas are much smaller and take you on a linear path to each’s conclusion. Character models are fully realized and even upon close scrutiny look really good, though unfortunately the NPC’s mouths don’t move to their speech creating a large disconnect between the audio and visuals   A cool feature is the optional viewpoint changes which bring the 3rd person action over the shoulder or high above your character, which was my preferred way to play.  A view feature which is awesome, though hard to play in, is a 1st person perspective, which removes the player model from the game, minus his or her weapon, and gives you a true sense of scale with the monsters you are facing.  Also included is a ‘finishing move’ option that lets you perform a fancy little ‘God of War’ type finisher when larger enemies get low in health.

Unfortunately, the audio suffers a little more than the visuals and exposes the more budget roots of this title.  Music is alright and keeps the mood sombre when needed and matches the action whenever the next batch of monsters show up.  The voice actors do a good job as well, though not all the dialogue has been recorded so while each NPC greets you with s familiar statement, after that you may be left the to read text below them.  Sub-titles also suffer from some poor translations, though none of that is game breaking, just a constant minor annoyance throughout playtime.  Your characters will occasionally spout out some lines during combat special moves and it should be noted that the warrior lets out a big, unedited ‘F*** OFF!’ during one of his big attacks so if foul language is an issue for you, it’s in here. 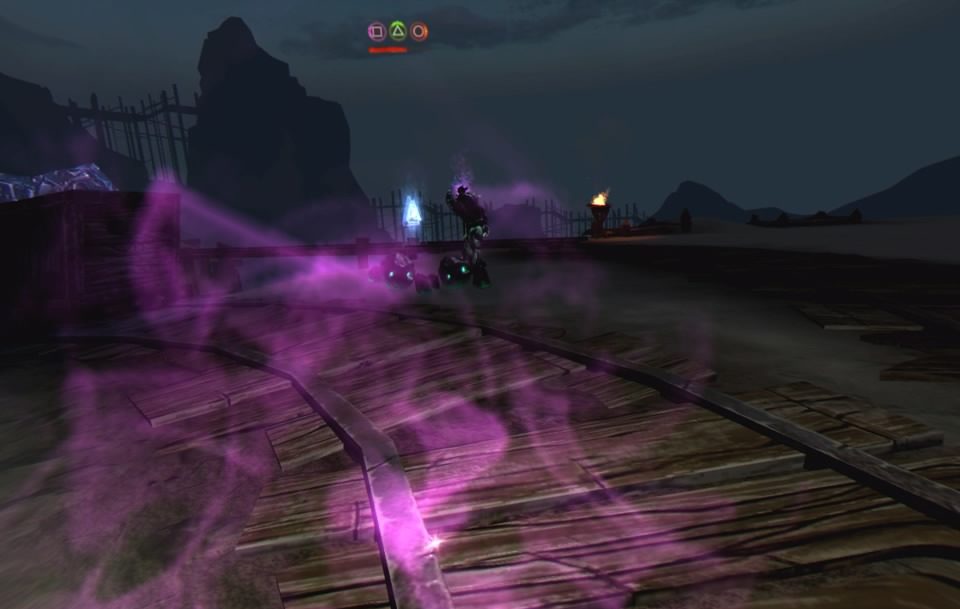 1st person view looks great, but is harder to play in.

Each stage is part of on an ongoing narrative and can be revisited upon completion should you want/need to venture back as they contain a bunch of objectives that will yield bonus loot upon completion.  At the games onset, most of your customization options are unavailable and are unlocked after completing levels.  These options come in the form of vendors who will provide you services if you can give them supplies acquired during a specified campaign, random pick-ups mission or just pay them in cold hard cash.  Gold is collected during the missions, which can be exchanged for crystals, which are needed for much larger purchases (like the companions) and there lies one of the larger staples from this kind of genre…grinding.  While the game boasts 50 hours of single player content, much of it will be spent revisiting stages just to get the necessary loot for your next upgrade, if not just to make the current stage a little easier.  This is typical of ARPG’s of this ilk and was expected, though still annoyed me as I’m just not the biggest fan of grinding and Preta seems to relish in it.  All your skills, weapons, items and companions are upgradeable or customizable, provided you have progressed far enough in the campaign and have collected enough loot to get them and though it may be a grind to get to your next goal, it’s still rewarding when you unlock the next item you have been wanting.  You’ll know when you need to start grinding session when you reach a stage that seems impossible.  Each stage does show a recommended character score which combines all your armour, weapons and extras so if you ever see a min score higher than your own, expect to die until you level something up.  With that said though, as you become more powerful in the game, earlier stages to become easier making loot raids in these sections go quicker the higher level you are.

I like what Preta is bringing to the table, but it has some more faults worth bringing up.  The 1st is the complete lack of hand holding, which some may love, but the opening stage/tutorial levels fails to establish anything but basic combat mechanics.  I was unaware until mission 4 or 5 that I could actually dodge attacks, which made the game a bit easier.  The special abilities are unlimited but take to time to recharge in between uses and your characters health also regenerates over time, though once again, these are things I learned through my own accord and a little more effort from the game as far explanation of mechanics would go a long way.   There are a few glitches on the audio side where NPC’s start talking then stop for no reason while the words continue to pop-up on screen.  An odd glitch that plagued my play was the sound of a sword clanging in the background, no matter what I was doing in the game.  You’ll also see the ‘Loading’ screen a ton as almost any change in the scenery, even visiting vendors, results in that black screen popping up and did annoy, though loading times aren’t crazy long.  I also found the pace at which you move to be to slow, especially noticeable in the town area, and a run option would be a much-appreciated inclusion in a future update. 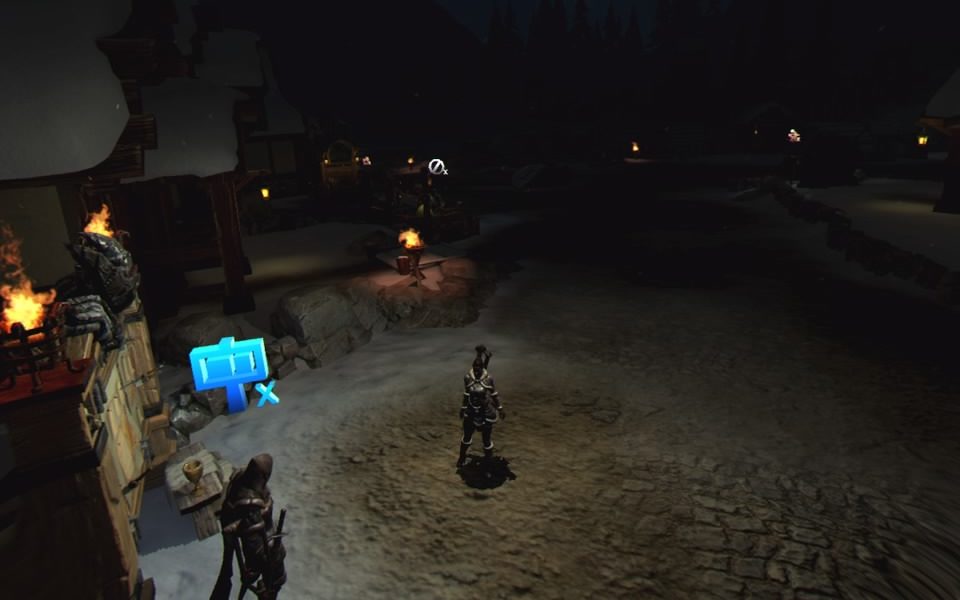 Preta: Vendetta Rising is a solid addition to the ARPG genre and a great addition to our VR library. The combat mechanics may be a little simple, but when included with the level up and upgrade systems make for some thrilling and difficult battles.  The game definitely relies on a lot of grinding to reach those lauded heights and though that is typical in the genre, it seems to be excessively overused here making for some repetitive gameplay.  For those that are just looking to unwind for a few minutes, it only takes that long to tackle a stage and accrue a little bit loot and still make some small bit of progression.  It’s a little rough around the edges, but the developer has been working and updating the PC version of this game for almost a year, so I would expect some additional updates for this version as well to fix some of the more minor issues and add in the promised multiplayer co-op raid content, expected very soon.

What would I pay?  The $20 asking price is fair and even though the content may feel a bit inflated, it’s well worth the asking price.  With the promise of multiplayer raids coming in the near future and updates to fix some of the rougher edges, Preta shows a lot of promise as being a staple for any VR collection.