The Hitman franchise got the VR treatment early last year when Hitman 3 released with full VR support for the PSVR (review here) which also included backwards compatibility for Hitman 1 & 2 as well.  While that release was met with positive reviews, the aging PS4 & and DS4 only control scheme had many crying foul that there was no PCVR release.  Fast-forward a year later and the PC version now has VR support though it might not be what many were expecting/hoping for. 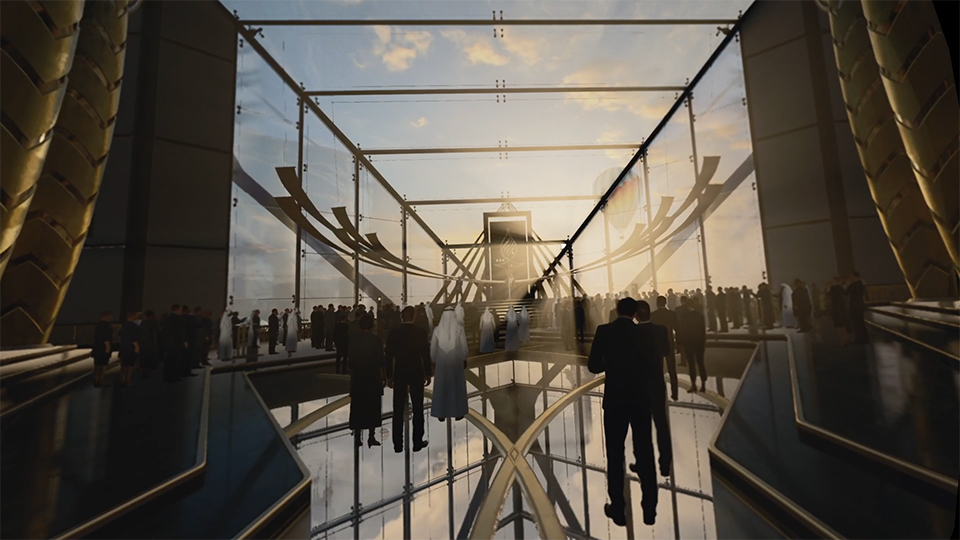 For all intents and purposes, this is a direct port of the PSVR version and while you can use both hands thanks to using 2 tracked motion controllers, that’s more superficial than it sounds.  As this is a flat game 1st, many of the interactions are handled by face buttons and while VR places you in Agent 47’s shoes, most of those interactions are still handled by face buttons making for what can at times be a very awkward hybrid title.  This controls like a standard FPS in VR and unlike the PSVR version, you can now punch with your left or right hand and even grab 2-handed weapons though the latter is superficial as aiming your weapon is only handled by the position of your right hand and for you lefties out there, you are out of luck as there is no comfort option to accommodate you.  Basic VR interactions are also obtuse as items you can grab, can’t be physically grabbed but must instead be looked at with a press of the right trigger to pick it up.  Want to climb that pipe to a higher level?  You’ll need to stand in front of it, look at the right spot to highlight it, press the trigger button than push up on the thumbstick to scale it.  All these interactions make perfect sense when playing this on a TV, but in VR it can be very confusing and while I can forgive these shortcomings in favor of the game as a whole, I feel like many may be disappointed by the lack of VR in this VR game.  Comfort options allow for blinders and turn options to be tailored to the players needs with each stage being playable on 3 difficulties with countless ways to assassinate your foes giving making each stage highly replayable.  You can sneak up on a target and squeeze their necks until they lose consciousness or pull out your fibre wire for some satisfying kills with plenty of ways to sneakily kill your targets without giving yourself away.  As you progress, new unlocks become available, allowing you to start a mission with helpful items like lockpicks or weapons which could also unlock additional tasks found during each mission.  The game may be lacking in true VR immersion, but the scope of the campaign and high replay factor still makes this an impressive title, just one that doesn’t fully embrace the medium. 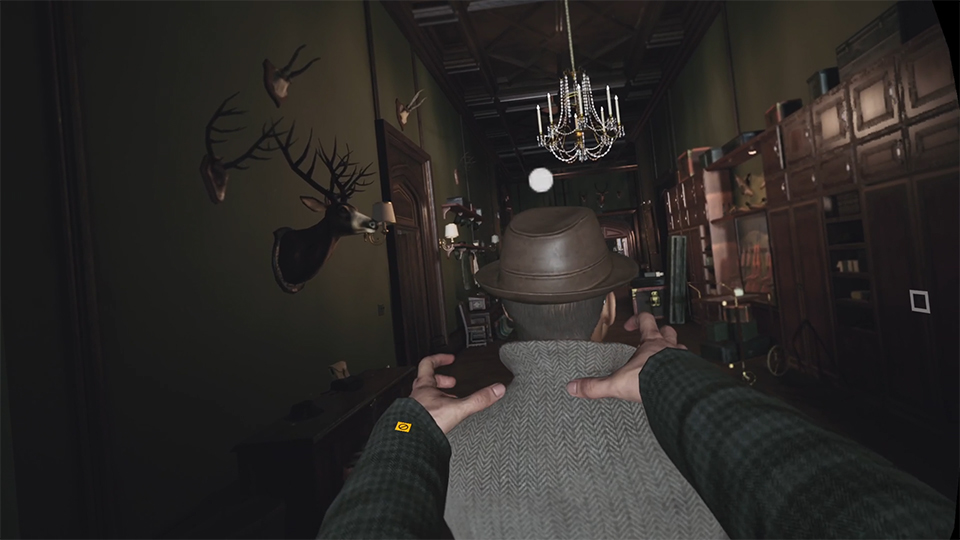 You’ll be choking a lot of people in this game!

For those unfamiliar with the franchise, you control Agent 47 through a variety of impressive and sometimes comedic scenarios.  47 is a master of disguise with each mission tasking you to assassinate someone by any means.  Each stage is its own contained sandbox that allows you infinite freedom when it comes to finishing your task.  Assuming outfits of the people around you (security guards, mechanics, cleaning staff…) can get you past many obstacles but you need to be careful as some NPC’s can still identify you as being a stranger in disguise and committing any crimes or disturbances could alert those around you that you are up to no good.  As you play through each stage, the plot thickens as new obstacles get in your way.  Assuming specific identities could unlock entirely new narrative paths and options, making each playthrough unique.  This sandbox effect is further amplified by unlockable items and options that let you start stages from new areas with additional starting advantages like lockpicks and other weapons further customizing how you tackle each level.  Outright violence is never the wisest course of action as it is very easy for NPC’s to overwhelm 47 in a firefight so stealth is key.  Scattered around each stage are numerous opportunities to dispatch your targets so should one not be a viable option, patience and exploration will typically reveal another. In one instance I could poison my victim, lure her to her chambers for a silent kill, assume the role of an Undertaker to get closer to her and those were just the options I found on my 1st go.  What’s funny is that despite all the options at my disposal, I had triggered events that led to another NPC killing her before I could and it’s that “random” dynamic that makes this game, and this series, so damned addicting. 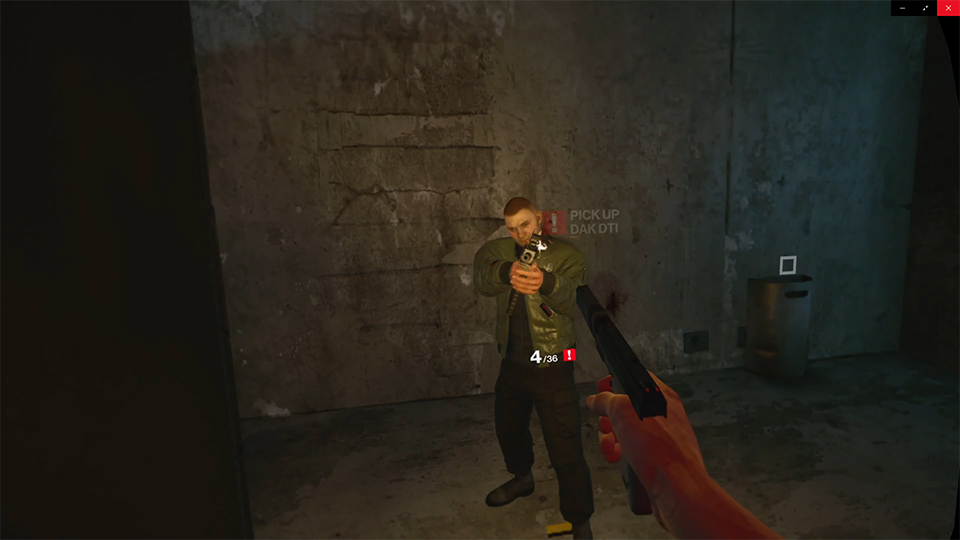 It’s smarter not to use guns, but sometimes you’ll have no choice.

The entire flat game has been visually transferred to VR though on default settings, it doesn’t look much better than the PSRV version which was surprising.  It still looks better and remedies one of largest issues with the console version which was NPC & item pop-in, which has been greatly reduced making for a much more organic experience.   Of course, graphical options are available to improve the experience to get the most out of the game, I ended up installing ‘Oculus Tray Tool’ which allowed me to make a few graphical adjustments that substantially boosted the visual experience.  In no way is it a bad looking game, just a little underwhelming considering the platform and headsets quality compared to console.  In fact, compared to other VR titles, Hitman 3 is stunning in its VR translation as I have never seen such a massive non-VR tittle ported to VR so thoroughly.  Stage draw distance is impressive as are the differences between each scenario.  NPC models come in a huge variety with many of them having actual character and storyline and up close in VR look great.  No 2 stages are alike so whether you are on a docked ship having a massive party, city streets bustling with people or a large mansion, each one offers up all new problems to solve and ways to play.  The attention to detail in every stage is unrivaled giving a fantastic sense of immersion as each scenario looks and feels fully realized.  Sadly, for VR users is that the cut scenes and scoped rifles are not in VR but appear in cinematic mode only which is disappointing, but not a huge deal with the game overall being visually one of the most impressive games I have seen come to VR.

While the visuals may be a bit of a mixed bag depending upon your expectations.  This has some wonderful 3D audio as well as a substantial cinematic soundtrack and a fully voiced campaign.  In fact, I would go so far as to say it’s near flawless in this department save for when there are just so many conversations and ambient noise around you that you can actually miss key plot revelations and mission objectives.  Thankfully, there is a mission log that keeps track of all the key events you have encountered, but it can be a little annoying when you miss those conversations through no fault of your own. 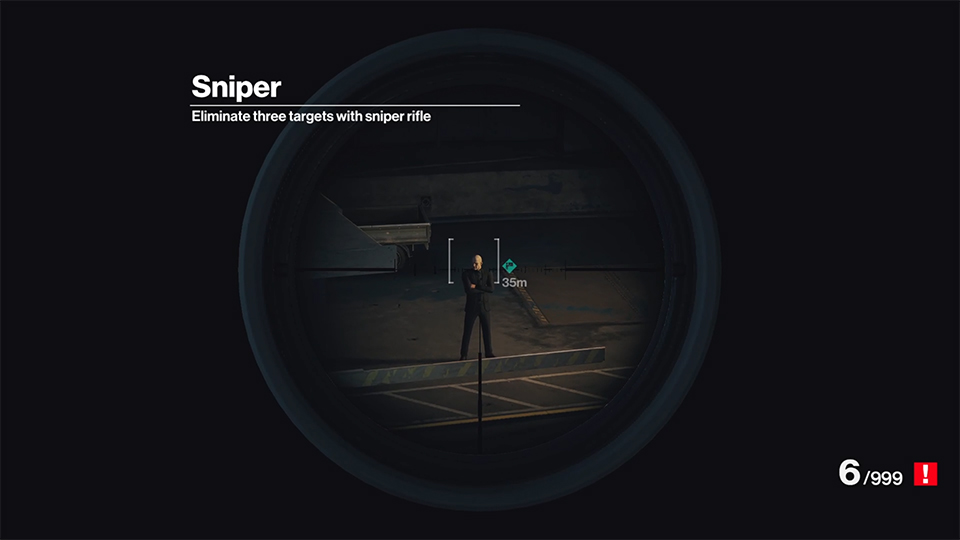 Scoped rifles and cut scenes are cinematic only.

There is a lot of give and take when it comes to the VR version of Hitman 3 but I will make it clear that despite my issues, I am very impressed with the final product as it stands at launch.  A few smaller issues like auto-save not working in VR have been fixed making the PCVR version the better version to play.  With that said, I did encounter some performance issues (with tray tool off) that impacted the game.  Frames would drop on stages packed with people and 47 seemed to have a hard time running or going up stairs causing a fair bit of jank. Scaling outcroppings on the sides of buildings is incredibly awkward as the camera didn’t want to face the direction I was moving causing a large disconnect between myself and the environment though thankfully, these situations don’t happen often during the campaign. For the most part the game ran fine, but when it didn’t, it can make for a very jarring experience in the headset.   The control scheme can be cumbersome at first, but it feels natural soon enough and it becomes easier to skirt the games VR shortcomings.   A wonderful feature of the Hitman series is the import function that lets you load stages from the previous games allowing you to play them all without having to hop from game to game.  This is exceptional as, if you have the 1st 2 entries in this trilogy, then you can play through all their campaign and DLC stages in VR with items you unlocked in those games being accessible as start options in any mission in any of the 3 games.  You’ll have to pay to play but having access to previous games through a VR HUB is unheard of, especially given that these games are some of the highest quality we have seen for VR with one minor note would be that the challenge missions in each game are not VR compatible and can only be played in cinematic mode. 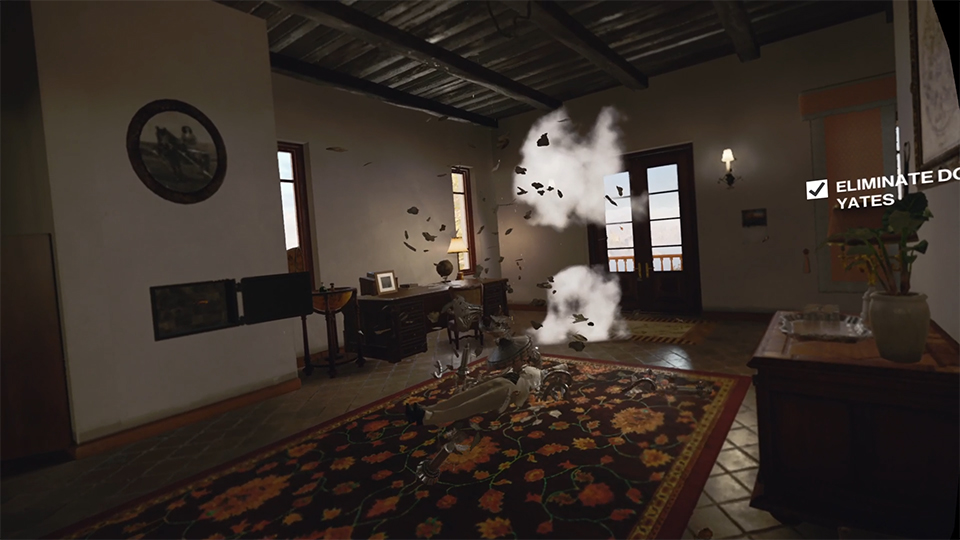 I have no idea how that chandelier fell on him!

Hitman 3 in VR is not perfect, and it takes a few missteps, but I can’t deny how much fun I’m having, diving back in the World of Assassination with proper VR controllers.  Some issues do hamper the gameplay but the shear amount of stuff to do and the insanely high replay value makes every playthrough a unique experience, as long as you are willing to experiment.  I loved this game when it released for the PSVR and this version is a direct port of that one with the benefits of PCVR making it a better experience overall despite it’s issues.  Unfortunately, those issues are still there and for all the benefits the PC delivers, I can’t help but feel like a little more effort into this version could have gone a long way into making this one of the best VR games ever made.

What would I pay? This is a full priced $60 US and worth it despite its flaws.  I’ve enjoyed this 3rd part to the series so much that I can’t wait to dive into the 1st 2 games in VR and see the origins of this trilogy.  The sandbox nature of the game always has something new to offer you and even just messing around just see what might happen is loads of fun…just don’t forget to save your game every so often.