Teenagers learning to drive beware as Ivanovich Games has not made a driving simulator!  We took Off-Road Paradise: Trial 4×4 out for a spin this week and gained a whole new appreciation for the open roads. If you have ever wanted to buy a jeep and drive it off a rock into a pool of water, now you can without any real consequences. Imagine playing angry birds, but you are the bird, in a jeep, trying to hit tikis and a flag to beat the level. It’s an interesting premise which takes you for an exciting ride. 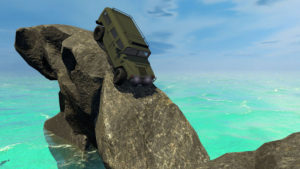 Driving wherever you want is half the fun here!

There’s not much to this Paradise on the surface but there is a surprising amount of depth to this game. You can upgrade your vehicles and unlock collectables by driving over tiki’s. Your vehicle is not indestructible but it will hold up better here versus any real life attempts…at least most of the time. I was a little  skeptical about a rope bridge ripping apart my wheels.  There are over 150 levels available currently, and an arena mode that is still in development with the devs updating this game frequently.

The camera is the key to success in this game. Like in classic 3D platformers you should be moving around the camera to find the best path to success before you attempt to beat each level. You will also fail each stage a lot, and you will fail in glorious fashion. The controls were very touchy and I often found myself flying off course or slowly sliding into the water. I used the Vive controllers the entire time but I felt like a gamepad would have been better for this game. The graphics aren’t the greatest, but I was impressed with how detailed the interiors were. My preferred camera style was the interior view as it was much easier to aim myself but the trade-off is missing the sometimes hilarious screw ups. 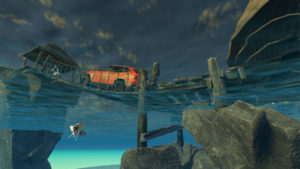 The visuals may not be the most stunning, but the gameplay makes up for that handily

At its core I think this is more of a puzzle game and less of a car game. It’s a 60/40 mix of the two. I’m not much of a car person, but I do like puzzles and there’s plenty of them here. I had no issues with the audio as nothing really stood out to me or offended me. There’s no doubt about it that this game is unique and fun and for those reasons alone I think it’s worth your time and money.

I think if you were looking for something for your Vive that is more game and less of a show or experience than this is worth checking out. If you like vehicle based games than this is definitely your speed, it’s just not something that had long lasting appeal for myself, though I did have a good time. Good for a group of people because of the short gameplay time and the funny fails that are sure to come. It’s also notable for being the first Vive game I have enjoyed while sitting down while playing.

Ivanovich Games provided theVRgrid with a review copy of the game and, regardless of our score, we thank them for that!