After many long months of waiting, Fallout 4 VR is finally here. Ambitiously released alongside Skyrim VR and Doom VFR as part of Bethesda’s goal to port existing games into virtual reality, this game is impressive. Contrary to the endless tech demos, wave shooters, and “experiences” bloating the VR market, Fallout 4 VR is among the first AAA titles to break these cliches and deliver a deep, engaging, full-length game in virtual reality. While this game succeeds at doing just that, it’s brought down by an overly glitchy interface and immersion-breaking design flaws. 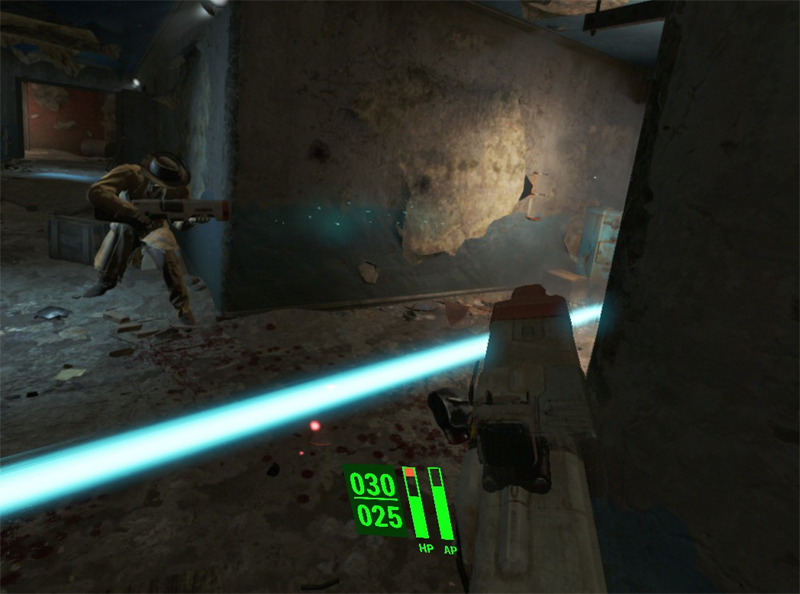 In VR, taking cover during a firefight is more exciting than ever

Fallout 4 itself is an excellent game. Cryogenically frozen in a vault-tec laboratory through the nuclear apocalypse, the protagonist is determined to avenge his murdered wife and find his lost son. Throughout the massive, open wasteland, the player can meet a seemingly-endless cast of eccentric characters, some casting invitations to join their cause. Combat is fun and satisfying, with a huge variety of weapons to choose from. These weapons, as well as clothing, drugs, and more, can be looted or purchased from many sources. Upgrades and modifications can be crafted with almost any item in the game, adding a huge amount of depth to the experience. Fallout 4 also hosts a robust levelling system, with a large number of unlockable skills that provide unique gameplay advantages. While many argue that Fallout 4 is inferior to its predecessor, I believe the game holds its own as a worthwhile, memorable experience. In what ways, however, was it improved for VR?

One of Fallout 4 VR’s most interesting mechanics is how it handles the pip-boy. Unlike its predecessors, which pause the game and opens a series of menus as if on your wrist, this game requires you physically look at your wrist in real-time. Despite its wide variety of complex menus, the pip-boy can be operated entirely with one controller, mainly with the trackpad. This interface can feel slow and confusing at first, but becomes surprisingly intuitive with practice. It can also make gameplay more challenging, as grabbing a stimpack or switching your gun no longer pauses the game. 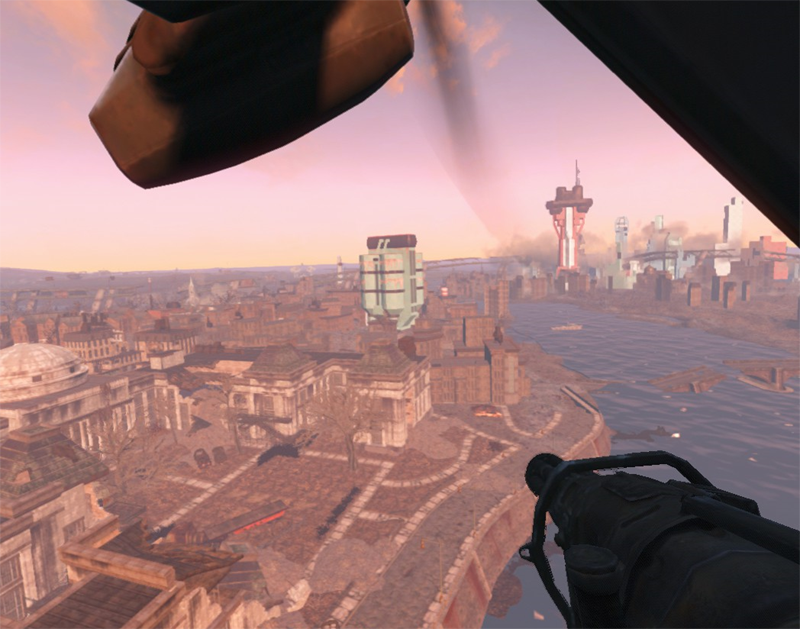 Commonwealth cityscapes are huge, and you can explore every inch of them.

Fallout 4 VR has also completely overhauled the V.A.T.S. system. Previously, the game would pause and zoom into various targeted appendages on an enemy’s body. This mechanic has been completely replaced by a form of slow-motion, with your weapon locking on to various enemies as you shoot them. For the most part, I thoroughly enjoy this change. Combat is now much less broken up, and V.A.T.S. now feels more like a superhuman ability than a brief mini-game. However, this mechanic comes with its own major flaws. Unless your V.A.T.S. accuracy is substantially upgraded, your weapon typically locks on to enemies you aren’t even looking at. Locked on a distant enemy hiding behind cover, bullets often fly in all sorts of random directions, even if there’s an enemy directly in front of you. It can be extremely frustrating when this happens, especially when it results in wasting valuable ammunition. Still, when it works, the V.A.T.S. system is both devastating in combat and exciting to pull off in VR.

One mechanic which was brought to VR flawlessly is Fallout 4’s building system. When near a workbench, holding a button spawns a menu over one controller, which can be navigated using the trackpad. Your repertoire of structures includes furniture, buildings, agriculture, and much more. These can be spawned with precision by pointing your other controller at the desired building location, adjusting it with the trackpad. This fun mechanic feels like it was built for VR, and serves as a clear upgrade from the original game. 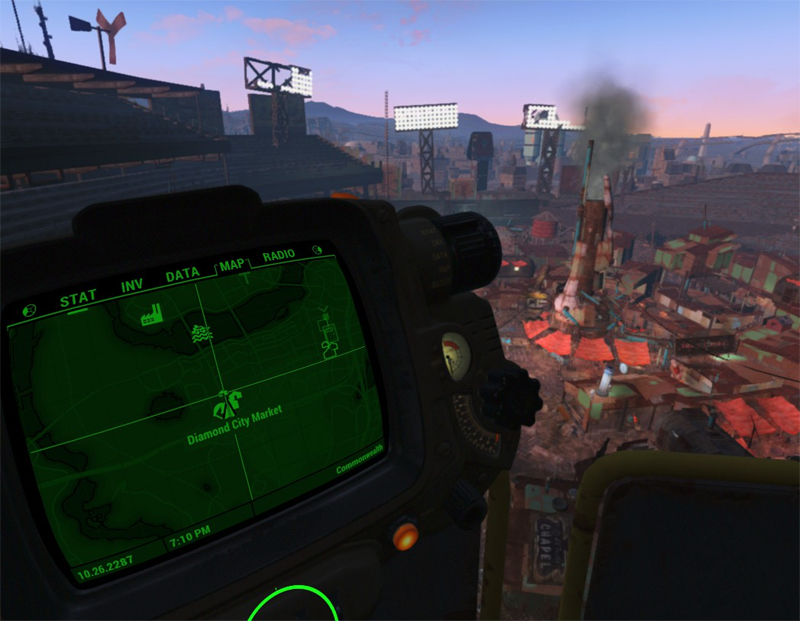 You can look down and conveniently navigate your pip-boy at any time, without pausing the outside world

While this game uses some excellent VR techniques to be a fresh and unique experience over the original, it’s not substantially different enough to stand as a separate title. Most of the differences are subtle, but add to an overall sense of immersion in virtual reality. The player must physically crouch to remain “hidden,” which is a significant gameplay mechanic seeing as an entire play-style in Fallout 4 is based around stealth. Melee combat is as satisfying as it should be, although freely swinging your arms can contradict your weapon’s intended “swing rate.” It also feels cool to stomp about in a life-sized suit of power armor, the ground shaking as you walk.

Interaction with most items feels the same as most non-VR Bethesda games, which feels like a missed opportunity. Clicking on items sends them straight into your inventory, only accessible via pip-boy. You can pick up items and throw them around, but this doesn’t serve any gameplay function. The game also attempts to add an arm-swinging locomotion used exclusively when in water, though this feels arbitrary and makes swimming feel awkward. Additionally, while the combat in Fallout 4 VR is as fun as it should be, it’s not fully optimized for VR. All your weapons are held in one hand, and reload automatically. This isn’t a downgrade from the original game, but isn’t as immersive as it could’ve been.

Fallout 4 VR’s length is its biggest selling point. Wandering the open-world, post-apocalyptic Commonwealth of Massachusetts, the amount of content accessible to the player is astounding. The original Fallout 4 has been brought to VR in its entirety, with nothing cut from its massive content value. In addition to a sizable main quest, the player can join any of four factions, each with their own lengthy storylines. Throughout a huge map, there are also hundreds of side quests to be stumbled upon, many of which individually offer a complete adventure. Most players spend 50-100 hours in Fallout 4 before completing the main quests, then spending hundreds more completing side quests and exploring. This depth of content is unsurprising for a Bethesda game, but groundbreaking for a VR title. With the exception of MMOs such as Elite Dangerous, there are few- if any- VR games that provide such a lengthy experience. At the time of writing this review, I’ve played Fallout 4 VR for 30 hours, which is only a fraction of the time I intend to keep playing. 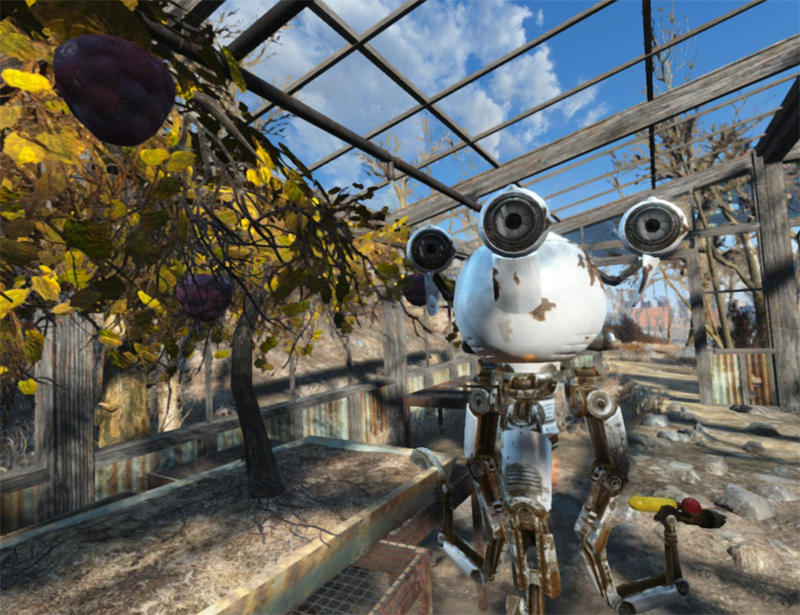 Is this how it must feel to be patronized by a Mister Handy in real-life?

Unfortunately, a game this immense ported into VR doesn’t go without its issues. While the game’s graphics are overall very attractive, the use of VR made Fallout 4 buggier than ever. The game’s performance is inconsistent, regardless of your PC’s hardware. The frame rate is smooth at times, and unplayable at others. The game also has extreme reprojection issues- turning your head too fast can cause the whole world to tear up and stutter. Many glitchy textures also flash like strobe lights, or are covered in reflective surfaces. In VR, these issues sometimes gave me extreme headaches. This is a particularly inconvenient issue for a game like Fallout 4, which requires long and focused play-sessions. The game’s user interface is decent, but cumbersome. Navigating the pip-boy and construction menus is confusing, over-relying on the trackpad. The game lacks rendered hand models in favor of the standard Vive controllers, and while this is a minor issue, it removes a lot of immersion when holstering your weapons. It’s also incredibly easy to clip through walls, which is an issue since valuable loot is often hidden behind locked doors.

What would I pay for it?  Fallout 4 VR is an incredible game that I will undoubtedly be spending dozens- if not hundreds- more hours playing. It’s incredibly glitchy, however, with an interface that can be uncomfortable or even unplayable at times. While this game’s VR mechanics are fun and unique, they may not be significant enough to justify a $60 price-tag separate from the original game. I’d pay full price for Fallout 4 VR due to its impressive content value, but fans who already experienced the original in its entirety might want to wait for a sale.

Bethesda Softworks provided The VR Grid with a review code for this game and, regardless of this review, we thank them for that!