Care to mix rail shooting with zen-like levels and slightly complex targeting mechanics.  Than look no further than Dexed, a throwback to rail shooters of old with a VR twist. If you are looking to unwind after an intense gaming session, but still want to shoot stuff, than this will be right up your alley. 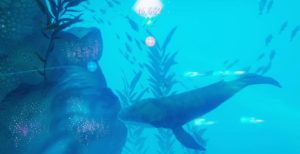 While not blowing, the visuals do the job.

There are 3 modes of control here.  The first, and best, is the move controllers(you’ll need 2), which allow the most freedom of movement and ease of targeting.  Simply hold down the trigger over the target and release.  Each controller is designated a color that matches the enemy color.  Using the DS4 is similar, point at your targets and lock on. The key difference is your targeting reticle must now be switched with the R2 and L2 buttons, it’s slightly more difficult, but for those without move controllers, it works.  The last control scheme maps the target to your headset, and still requires the DS4 to switch back and forth and is too convoluted to use with any kind of pinpoint accuracy.  There is pie chart turning here as well, but excluding navigating the main menu, I never really used it.

Through 4 stages, a boss level and an arcade mode you are tasked with destroying different types of enemies; fire and ice.   Simply hold down your trigger and move it over all the enemies of the opposite color, once you’ve targeted all you can, release the trigger and watch your blasts fly.  The more you target at one time, the higher the score combo.  On normal and hard difficulties, hitting the wrong enemy will either freeze your score for a few seconds, preventing more points or burn some points away.  What this all boils down too is patience, skill and your drive to get that top score.

The visuals themselves are by no means amazing but they do the job, more like a super high rez and polished Gear VR game.  Not say they are awful, but they lack the detail of higher end games.  Keep in mind though, this is a budget title.  The Water and Winter levels to me were a little more drab than the forest or inferno levels, which just seemed to pop a bit more.  The levels are traversed very slowly so you do get plenty of time to take in the surroundings around you.

The audio is also subdued, but intentionally so.  The music is slow and melodic, matching the pace of the levels nicely.  The effects as well are just fine with freeze and fire effects sounding as they should and the ambient sounds of the level adding to immersion.

As stated above, you are on rails, so your navigation through these environments is predetermined, excluding arcade mode.  In arcade mode you are in a large sphere with enemies appearing out of small holes in front of you in never ending waves, while you remain motionless.  Survive as long as you can (you have health that drains when hit) and accrue those points.  There is 1 more enemy type here, a fire bomb, which needs to be frozen than hit with fire to dispatch.  Otherwise he will explode, hurting you and destroying nearby enemies.  You also have the ability to clear the room, though this will cost you all those available points.

And that’s about it.  The name of the game here is repetition and dexterity(OH! I just got it!).  With only 6 different levels to choose from and no branching paths, you will have seen all this has to offer in around 30 minutes or so.  The main stages take only handful of minutes(I’d guess 5 to 7..I wasn’t counting) and the endless arcade mode lasts as long as you as can survive.  The draw of this game is achieving high scores, which are presented after every stage. 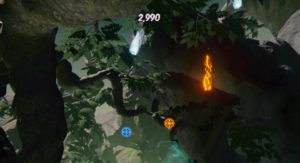 The forest level was my favorite. The visuals just popped!

If you are a point junky than you will come back to this again and again.  The control scheme works great and every time you get hit, you know it’s your fault.  Mastering levels and chaining together as many targets as you can will get you that high score, or close enough to have you try just one more time to challenge yourself.  All that said, if you don’t care about leader boards than you will lose interest in this pretty quick.  I give you about an hour or so.  There is a zen mode here as well, which takes you on a tour of the levels without enemies, but once again, that won’t be for everybody.

What’s here definitely works, but with only a handful of levels and the only thing changing them up is the difficulty, that may not hold your interest for too long.  Still, in you are in the market for a budget shooter, this will fill that void…at least for a bit

What would I pay? $10. That price doesn’t feel like a rip off.  I had some fun, replayed a few levels a few times and tried to get a top score, but the repetitious nature of this game probably won’t have me coming back anytime soon…I’m not a score junkie.

Ninja Theory provided theVRgrid with a review copy of the game and, regardless of our score, we thank them for that!