I mentioned only a few reviews ago that there seems to be a lack of turret shooters being released for PSVR and I’m going to assume that Sony read that review and decided to prove me wrong.  VR Invaders is your standard PSVR stationary shooter that carries with it a single player campaign and a few other modes to extend playtime.  The content here is a little light, but the execution is almost flawless. 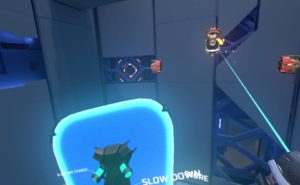 Dual wielding has always been my preference in VR shooters, even if that 2nd had only carries a flashlight, or in this case a shield.  If you played Unearthing Mars, the 2nd to last level plays identically to what is offered here, only this is way better.  You play as Thomas Hall and after being transferred(or diving) to a digital arena to track down a missing programmer.  Events occur, forcing you to battle wave after wave of enemy controlled drones to get to your target.  One hand always has a weapon, but the other “shield” hand is also used to temporarily dual wield weapons or to use a ridiculously awesome slow motion power.  Power ups, health boosts and weapons are offered up, seemingly at random, as you dispatch your robotic foes.

The campaign consists of 8 levels, each broken up by a brief, voice only, narrative.  The story is told in these sections as well as in game banter between yourself and a fellow female companion, Ness.  The story is intriguing enough, but fairly limited in its execution.  In fact, it feels like the story was tacked on after the developer nailed game mechanics, and they NAILED the game mechanics.

VR Invaders exploits all the positives that PSVR has to offer while skirting around its limitations.  The action in the game takes place only 180 degrees in front of you and because of this, the action is more focused, and more importantly, gets around the Move controller tracking issues.  I never once experienced any loss of tracking, and considering the action takes place high, low and far to the sides, that’s saying something.  Along with that is the underutilized motion tracking, allowing you to dodge enemy attacks by moving left or right and ducking.

The visuals here are also top notch.   You stand on a small platform, indicative of your movement area, and the levels before range from large silo-like levels while other are a little more open.  The action always takes place near to you, but the depth and scale of some of these levels is impressive.   Enemies are heavily detailed and come in a wide variety of forms.  Each campaign levels consists of a boss battle, some easy, some hard.  A cool little addition is how destructible the levels are, this destruction is mostly superfluous; mostly destroying walls and other inconsequential elements.  However, some levels’ destructible items actually remove enemy cover, giving you more time to assail the enemy AI.

The audio is nothing to write home about.  The voice acting is alright, but feels forced as if the actors read their lines randomly, without being told the story or how to relate emotions.  It’s not awful, but it is off.  The soundtrack as well is forgettable, which is better than being annoying, but doesn’t stand out in any significant way.  Sound effects on the other hand are fantastic, every explosion and gunshot carries with it weight to back up the anarchy happening around you.

The other modes present are ‘Survival’ which pits you against successively difficult waves until you die, a standard fare considering the content.  The other mode ‘Fire Range’ pits you against an unrelenting assault of mines.  The difficulty ramps up fast and the challenge is to last as long as you can, and that won’t be very long, the achievement in this mode is to last 3 minutes, just to give you an idea what you are up against. 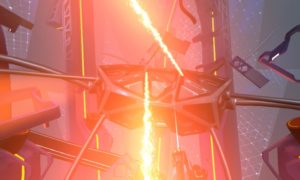 Dodging these lasers is an extra level of immersion I wasn’t expecting!

This is a shallow package content wise, but that is balanced by the near flawless mechanics.  Power-ups abound and switch up your secondary weapon arm accordingly, but your largest advantage is the slow-motion mechanic mentioned earlier.  Simply holding down the trigger in your off hand suspends time for a few seconds allowing you to catch your breath and clean up the battlefield a bit.  It’s absolutely great to use and will save your butt more than a few times.  Any incoming projectiles can be shot out of the air, or your shield can take a hit or 2 before need a few seconds to recharge.  The Slo-mo ability is the same giving you only a few seconds before it wears off and requires a recharge, which means you can’t use it for a bit.  Every time you slow time impresses and makes you feel all powerful, at least for a few seconds.

This may just be the most competent shooter I have played on VR.  My biggest issue is the content available.  The campaign, on normal difficulty, can be beaten in just over an hour and on the hardest difficulty is probably unbeatable so if you are looking for a challenge, you’ll find it here.  The other 2 modes offer a slight mix up of gameplay, but  its ends up feeling repetitious.  The campaign does end on a “to be continued” sort of note, but it’s unclear at this time when or if more content is coming.  This is still great stuff with the near flawless shooting mechanics, great visuals and a kick-ass slo-mo mechanic all lending itself to be a must-play game and a bar setter for PSVR shooters.

What would I pay? $17.99 is probably perfect pricing for what’s here.  You’ll get a few hours of joy out this and the gameplay will call you back more often than you think, just for a round in mode, it’s damned fun!

My.com provided theVRgrid with a review copy of this game and, regardless of our score, we thank them for that!