If you are in the mood for some classic arcade shooter action than look no further than Super Stardust Ultra VR.  The Super Stardust franchise has seen its released on every console Sony has releases since the PS3 up to last years version for the PS4, which is the exact same game as this one only with the view changed to accommodate VR and 1 new mode taking advantage of the headset.

Your standard view of the action and what most of this game looks like!

I never played any version of SS before so this review may read familiar for those that have.  The main mode in this game has you controlling a ship orbiting a planet while defending against waves of enemies and obstacles colliding and attacking the planet.  Left thumbstick to move, right to shoot in the direction you want, along with bombs and power ups and you get the perfect recipe for a run of the mill Robotron-esqe experience.  Multiple, successively more difficult, waves are available in each planet for each mode.

There are plenty of modes here, all with slight variations on the core mechanic; time limitations, only use bombs or turn your ship into an indestructible battering ram and so on.  The goal is the same in each mode; kill everything, don’t die.  There are four planets to unlock as well as difficulty modifiers but basically it’s all just more of the same.  Not saying that’s a bad thing, but unless you are really into twin-stick shooters, you will mostly likely lose interest sooner than later.

The sole unique addition to this is “Invasion Zone” which puts you in the cockpit of your ship on a planets’ surface while defending against waves of enemies.  It plays very similar to Battlezone, but on a smaller scale.  Waves are short taking only a few minutes to dispatch and enemies come at you in predictable patterns and configurations.  It is a fun and welcome addition to the main game, but ultimately it comes off as a bit shallow and feels tacked on.

I found this game to be underwhelming when it came to presentation.  Colors are monotonous, textures are blurry and on objects in general just lack detail.  This may be VR’s fault as you are looking at a small planet…on a HDTV great, but shrunk down on an HMD and everything looks grainy.  Oh, this version of the game can be played in or out of VR (excluding Invasion Zone) so I think that’s a plus? 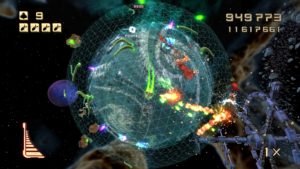 The audio on the other hand is fine with gun blasts, explosions and all the other effects sounding great.  The soundtrack as well is of the high paced electronic sort and fits well the gameplay. Also some audio queues come from the controller, and I’m a fan of that.

Overall I just felt underwhelmed by the experience.  It’s a very repetitive game which is typical of the genre, and it’s unfortunate to not see some out-of-the-box thinking.  The VR mission is nice, but other titles offer a similar experience done better.  What is here works, no question about that, but boredom will set in long before you finish all the missions here.

What would I pay?  $10US.  The game is loaded with different modes and content, it just wears itself out and you wont care about any of them after a few play throughs.