Galaxy Race is a simplistic sci-fi racing game that attempts to integrate an ambitious new method of VR locomotion. While it’s pretty, its movement system is broken- and completely violates the experience as a result. This game promises an exciting, varied, and comfortable racing thrill, but leaves me with little more than an aching back.

Galaxy Race gives you a choice of three maps to race in. These environments are gorgeous, with massive sci-fi set pieces that almost feel cliché, but still look original. The game’s excellent graphics push this further, with bright, vibrant colors and decent lighting. Textures are a bit smudged, but the game still looks more attractive than most VR titles. With backdrops as pretty as those in Galaxy Race, I frequently found myself stopping in place- neglecting the race itself- to gaze in awe at them. Unfortunately, this wasn’t the only reason I often avoided playing the actual race. 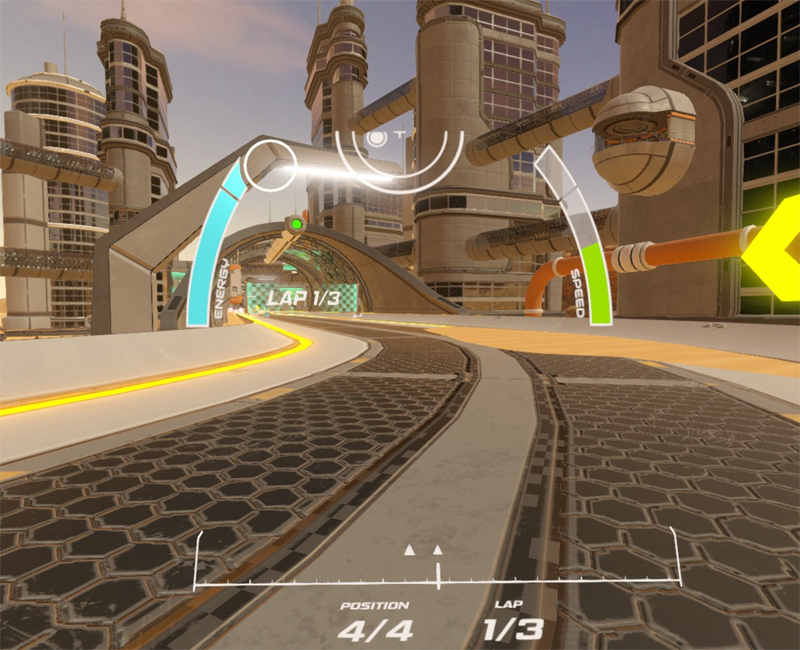 I’m thoroughly impressed by this game’s map design. If only it were put to a better purpose than this.

Galaxy Race’s environment and graphics are considerably its best aspects. The overall gameplay is a rather generic, templated racing game. Comparable to Mario Kart, it involves racing through one of three maps, against 3 other characters, while collecting power-ups to give them a disadvantage and grabbing “energy” to maintain your speed.

There are only four powerups, preventing any variety. Most of them aren’t even exciting. You’ve got a standard turbo-boost, a shield, mines, and throwing discs. The boost is the most effective but, given its status of one of only four options, it’s a bit disappointing. The shield does what it’s supposed to but fills your entire boundaries with what resembles a giant blue comfort-chaperone. Since you can’t pick up new power-ups until you use your last, having to frequently see this can be irritating. Mines are effective, but obnoxious. As one of only four abilities, they’re frequently littered around the race-track to such a degree that, at certain times, hitting them can be inevitable. Throwing discs, functioning as the game’s only real weapon, barely work. Their physics feels fixed, with trajectories contradicting the way I swung my arm. They also lag behind if you throw them while cruising at high speeds, making them ineffective unless they lock on to an opponent, seemingly at random.

Having to frequently collect “energy” is also a frustrating and unentertaining aspect of gameplay. Your energy meter runs dry fairly quick, and if it does, your racing platform slows to a crawl. If this occurs while you’re far from any energy spawns, you’ll be spending an agonizing amount of time moving hopelessly while your opponent’s complete full laps ahead of you. 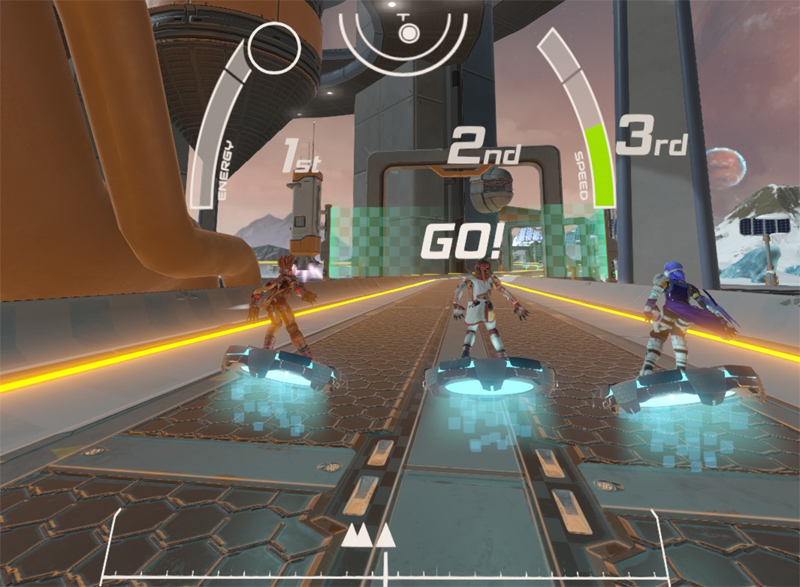 Seeing the back of each opponent’s head is about as much of the story as you’ll come to learn.

The Galaxy Race Steam store page makes a significant point out of its cast of four heroes, describing the origins of each. As a talking point, this bears absolutely no merit for the actual game. Not only is gameplay identical between all four characters, but their only distinguishing differences lie in their appearance. There’s clearly no story whatsoever, and you can’t even choose the hero you’d like to play as. You just arbitrarily spawn as one at random.

Despite all these flaws, I would still have had some slight enjoyment out of Galaxy Race, had it not been for one critical flaw: its locomotion system, which is touted as its most transformative and exciting gameplay aspect. This game requires you lean (far) in any direction to move. The further your lean, the faster you move. This leads to a game-breaking issue, as all your counterparts typically move close to the maximum possible speed. To compete, you must lean your body to a ridiculous degree- and maintain this for an entire match. In order to see where you’re going (and gaze at the game’s great visuals), you must additionally peek upwards. As you might expect, this was incredibly painful. Sustaining a position that could provide sufficient movement, for the entire race, made my neck and back ache in a way that not a single VR game has ever before. It also made me dizzy, even though I rarely get motion sickness in games with trackpad locomotion. This movement system is potentially the worst aspect of Galaxy Race, making the experience borderline-unplayable for me after less than 10 minutes of gameplay. 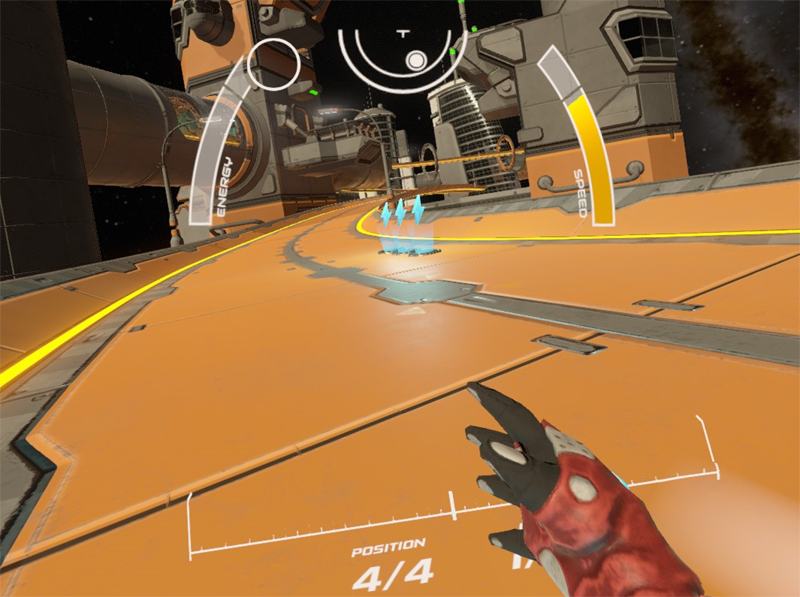 If I accidentally slide past these energy pickups, I’m guaranteed to lose the entire match

Although Galaxy Race is not listed as “early access,” it’s missing a significant amount of content. There are a variety of game modes listed in the main menu, but “arcade” is the only one that isn’t greyed-out. Even though its maps are absolutely gorgeous, having only three is ridiculous- especially considering this game’s price, and that this is your only available playstyle. Even multiplayer, a feature that seems like it would be obligatory for a racing game such as this, is currently unavailable and listed as “coming soon.” You can only race against bots, with AI that’s acceptable but not necessarily varied. Playing 4 matches, having experienced all Galaxy Race has to offer, gave me 45 minutes of content. A $15 game should never be limited to a single game mode, on only three maps, exclusively with bots. A developer newsletter suggested that they’d added a free demo, but none is currently listed on Steam. Given the heinous lack of content available, I’m suspicious that the game itself is nothing more than a monetized demo.

What would I pay for it?  Galaxy Race lacks content, comfort, or novelty. It only features one thing unique from other racing games, which is its locomotion system- one that makes it nearly unplayable. Most of this game’s advertisements don’t accurately describe the experience at all, which is painfully limited. Its graphics and environment are very attractive, but this doesn’t make up for all its other flaws. If this movement system were changed, or made optional, I’d pay no more than $5 for Galaxy Race. Even then, this game won’t give you anything other than a sore back.