Pixel Ripped 1989 is a game within a game and is crazy concept that utilizes VR in some very impressive ways.  The core story involves you taking control of a girl named Dot in order to defeat an evil goblin dude who calls himself the Cyblin Lord.  The game within a game concept has been used before, but never quite like this with the entirety of the game requiring you to play an old 8 bit handheld while the “real” world happens around you.  It’s really hard to describe but the mechanics used throughout the game not only keep it fresh but delivers a constant stream of homages to the games of yesteryear. 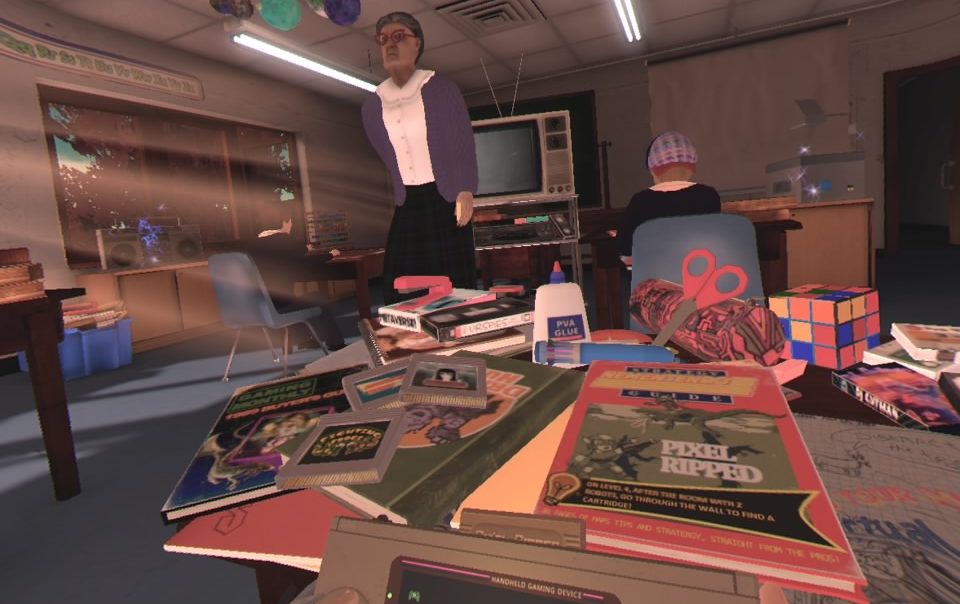 If you see her coming your way…you better line up a distraction ASAP!

It’s DS4 only and for good reason as you hold a “Gearkid” portable gaming device, very similar to the gameboys and gamegears from almost 30 years ago.  Depending upon the stage youmay have to perform some “real-world” interactions, while playing the game, to progress.  The opening and third stage requires you to distract your teacher using a spitball straw to interact with items around you.  The second stage initially plays the same as the first, minus the distraction tasks and I was a little befuddled by the lack other elements besides the side scrolling platformer I was playing on my Gearkid.  Once I beat that stage though, things get a bit meta as the vile Cyblin Lord attacks the real world, turning your Gamekid into a sort of window into the 8-bit world and whatever you point your Gearkid at turns 8 bit on screen and you need to shoot attacking pigeons out of the sky, like a wave shooter.  This carries on throughout the game as a few more mini games are introduced that merge the 8-bit and the real world in unique ways.

The look in Pixel Ripped is sure to appeal to gamers who grew up in the 80’s.  The side scroller you play on your Gearkid handheld clearly takes inspiration from the Nintendo and Sega handhelds from the 90’s.  The display is black on green and everything takes place on a 2D plane.  The real world suffers a bit more with some stiff animations, clipping and a lack of detail but still does the job needed, but look at anything to long and you’ll see the flaws.  Still, with the focus being on the 2D platforming, it won’t be more then a few seconds before you completely forget about the mediocre ‘real world’ visuals and get right back into the game within a game.  Certain effects transpose the 2D game on the 3D world and get colorized making for something I can definitely say I have never seen in a video game before and that unique combo allowed me to forgive much of the flaws and just enjoy the nostalgia ride that Pixel Ripped took me on. 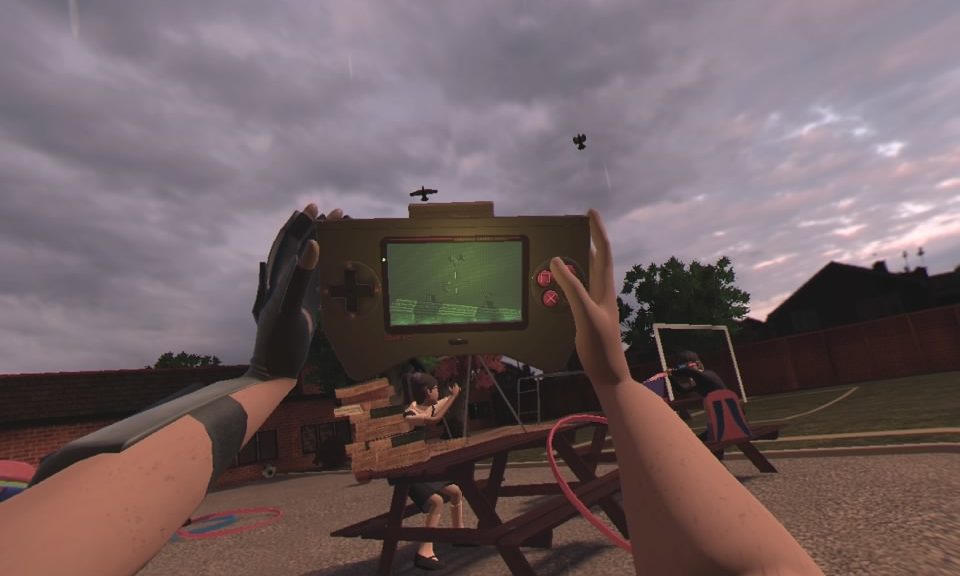 I don’t even know what level of meta is going on anymore?1

Never has 8-bit and real-world audio been blended so seamlessly.  Sitting in class while students play all around you and teacher threatens discipline for not paying attention, all while you are focused on playing a video game is all kinds of awesome.  Classic midi tracks pepper the game and old-school video game sounds have been seemingly ripped from the games Pixel Ripped pays homage too.  The theme song, also 80’s sci-fi inspired, is catchy tune I’ve been humming since I first played the game and really can’t find any fault in the audio.

The gameplay is truly where this shines, merging 2D platforming within a 3D world.  Like Statik, your hands are locked in place holding a DS4, which matches the hands holding the virtual handheld.  Having to constantly find distractions to keep the teacher is fun, though depending upon how good or bad you do you may be repeating these distractions a little too much, turning these meta gameplay moments into a bit of chore.  Still, the way the game constantly changes the way you play the platformer is a delight, whether it be above your desk, on your desk, in an arcade cabinet or on a screen that changes the real world around you.  The other major mechanic is the spitball straw which you stare at to load and then stare at your target to fire.  While this is initially used as a distraction mechanic only, in the last stage you are going to need it to beat the boss. 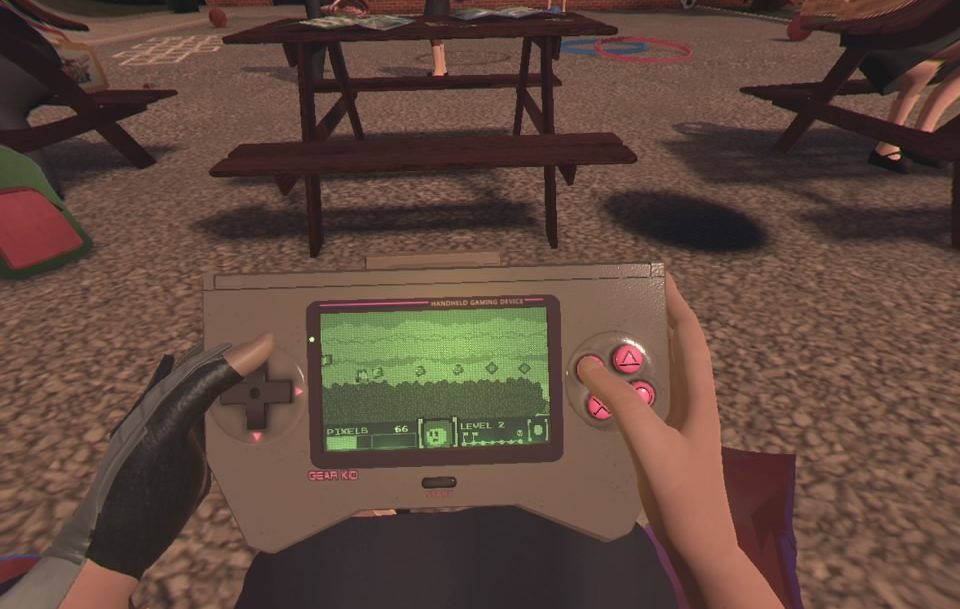 A bulk of the game is you playing this game!

Depending upon just how good you are at the game, 2 to 3 hours is probably the most it will take to crush the 4 stages available with the last stage taking a substantial amount of time.  Honestly, the last stage is a grind with a few checkpoints as you beat down the boss, but hitting those checkpoints is task in itself with the difficulty being ramped up to maximum levels.   Besides that though, there really isn’t to much to complain about.  The games length may seem a little light to some, but this is a budget title.  Hidden in each stage are cartridges to find which add to the replay factor for those who love 100%ing games.  Pixel Ripped is full of homages and references to games of yore and every time I spotted one, the child inside me gave a heartfelt smile.  Mario, Sonic, Ghouls and Goblins, Zelda, Contra, Megaman…the list goes on and on and the amount of references to classic 80’s platformers straight up won me over. 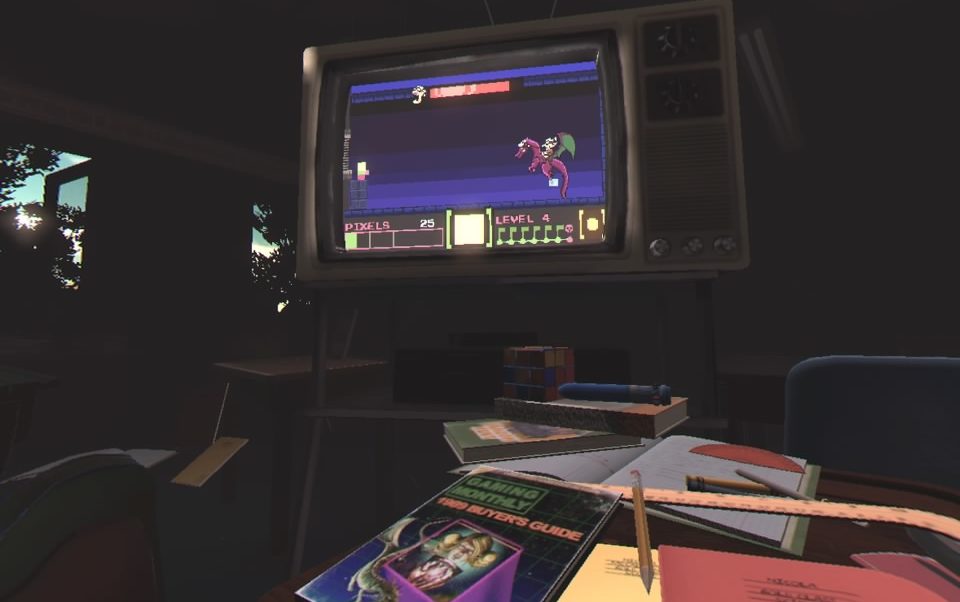 Playing a game in a game on a TV has never been so immersive!!!

Pixel Ripped 1989 is a meta homage to 80’s platforming that succeeds in every way it needs to.  Even the main menu has been utilized for VR, yet still carries that retro feel. I loved my time in Pixel Ripped and every way the game changed things up to keep itself fresh.  The end of the game hints at much more to come and I honestly can’t wait.  Excluding the last stage, the other levels felt very nicely balanced and were an absolute joy to play.  Pixel Ripped shows that even 8-bit side scrolling platformers can work in VR and in all honesty, if these devs can make this works so well, there is no reason why any other genre couldn’t work in VR.

What would I pay? $25 does seem a tad high, though the launch price of $20 seems a lot more appropriate.  I did love my time in the game and it’s a solid throwback to games from my childhood and I really can’t wait to see what this studio comes up with next.

ARVore Immersive Experinces provided The VR Grid with a review code for this code and, regarldess of this review, we thank them for that!