It’s winter time and who doesn’t love a good snowball fight?!  It’s been ages since my last one and thanks to VR, I now get to relive my childhood days with a few added VR nuances and 1 glaring omission. 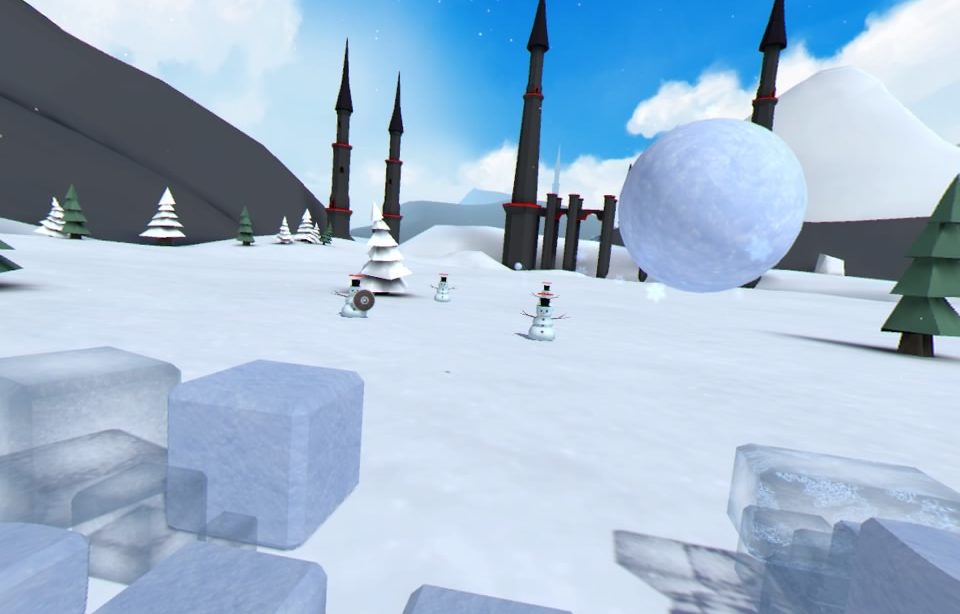 Defend yourself against the incoming horde!!!

It’s Move controllers only and when the game works, it’s fantastic, but it doesn’t always work.  When I first started playing, throwing snowballs at the enemy bases and snowman behind them felt good, but the more I played, the less accurate the tracking seemed to be.  It never gets awful or game-breaking, but the as the difficulty ramps up, struggling with tracking issues does not make for the most fun experience.  Luckily, besides just lobbing your balls, you also get a couple weapons (like a slingshot) that make aiming and shooting a little easier.  Besides launching snowballs, you must also must build your base by grabbing ice blocks around you and building up your walls which feels a little like a Tetris game, especially when you are given blocks in the some of the classic Tetris formations.  This worked well, minus the fact that the blocks had almost no weight, resulting in them tipping over and pushing themselves out of the way very easily.

Those controls cover the main game and ‘Survivor’ portions of the game.  The other mode available is ‘Fortress’ mode which turns this into a mini god-like type game.  Now you view the battlefield from an overhead vantage point where you can build your bases and place snowmen in them to defend against the incoming horde of snowmen.  It’s difficult to place the blocks with 100% accuracy, but you can still make competent bases that defend well against the enemy.  You also have the ability to jump into one of your snowmen and start dispatching foes on your own, letting you save your troops from a dire situation. 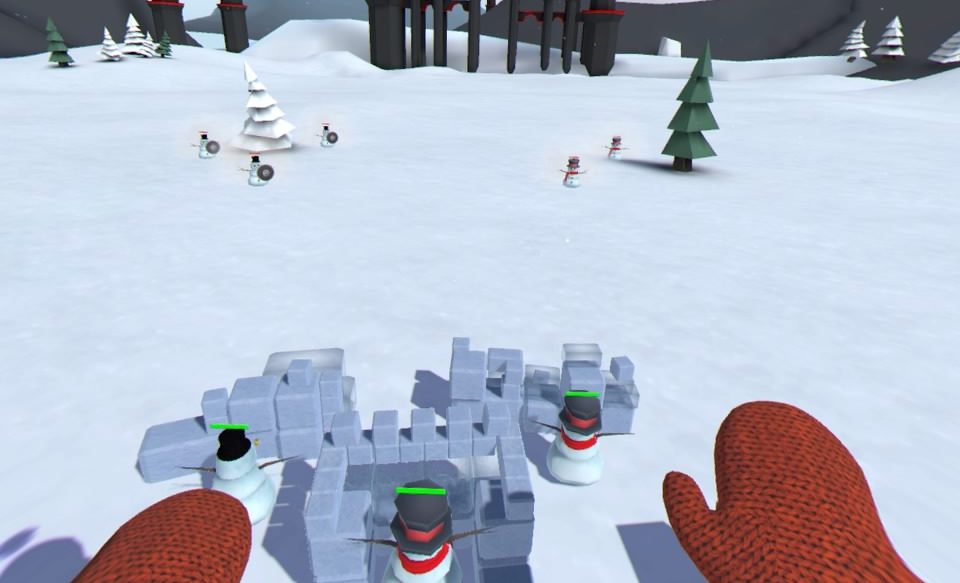 Wipe the out…all of them!

Friendly is the best way to describe the visuals on display here.  Your Move controllers are represented by some very large mittens, a cartoony fox helps you through any tutorials.  The stages are all winter themed with a few trees scattered around, but for the most part it’s just a snowy clearing with yours and the enemy bases in view.  Typical of VR, the simplistic toony art style makes for a very clean and crisp looking game that looks great.  Ice blocks are shiny and crack as they get damaged, frost covers your vision as you get hit and the ‘fortress’ mode allows for an overhead view of the same battlefields. It’s all just so darned pleasant!

On the audio side, nothing here is amazing, but everything fits.  A wintery tune (maybe 2, hard to tell the difference) accompanies the game and fits the overall theme. That little fox talks to you in annoying voice, but doesn’t talk too much so there’s no issues there.  You can hear the impacts of the snowballs and that’s really it. The sound fits the game adequately! 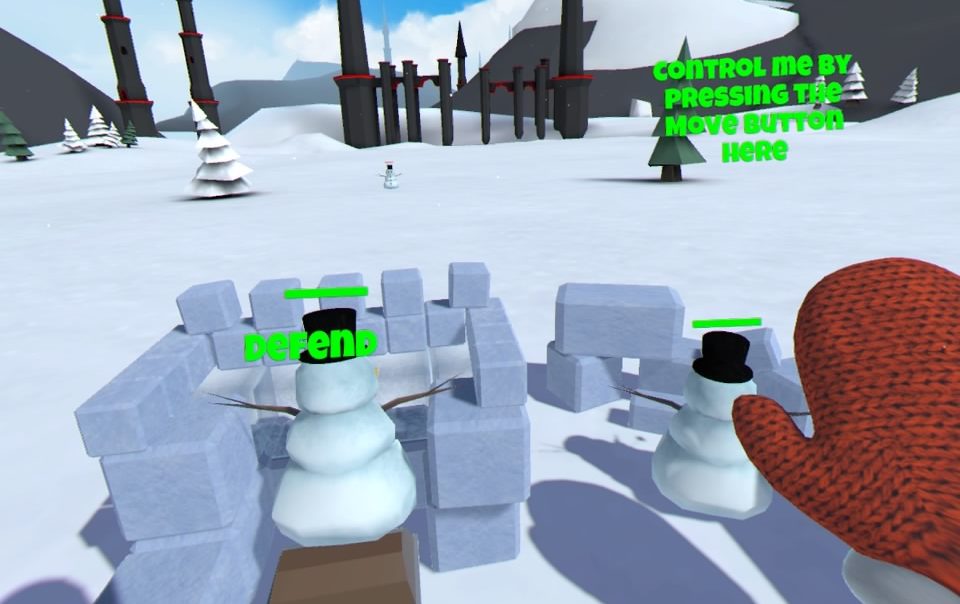 So if you had to guess, which base do you think I made?

The challenge, and frustration, ramps up fast in any of the modes and when coupled with the occasional tracking issue, can lead to some very tough battles.  Building your own base becomes a guessing game somewhat, as the blocks you’re a given come in random shapes and sizes which makes designing your base in the allotted time a bit of a panic.  When enemies come at you from multiple angles, it’s hard to keep an eye on all of them, and they tend to toss balls at you with pinpoint accuracy.  Of course, you can dodge or block these projectiles, but when being assaulted from all sides, it just gets nigh impossible and I failed later missions over and over and over before getting a lucky break.  Upon failure (3 hits) you can restart the previous level fresh, or with the base you made in your last attempt, saving you a little time if you were happy with your setup and just need to tweak it a bit.

What Snow Fortress is missing from its PC counterpart is a multiplayer mode, thus leaving us with the 20-stage campaign, survivor(horde) mode and the Fortress Mode, all against AI opponents.  I’m sure there is a valid reason for its exclusion, but it is noticeably absent and even before I found out that it was removed I thought as I was playing that this would be fun against another player.  While you can adjust your height in the game should you feel too high or low from the ground, this could have benefitted from a proper position calibration as lobbing snowballs often means extending your arms outside of tracking range, forcing camera adjustments, or changing the way naturally want to throw in VR. 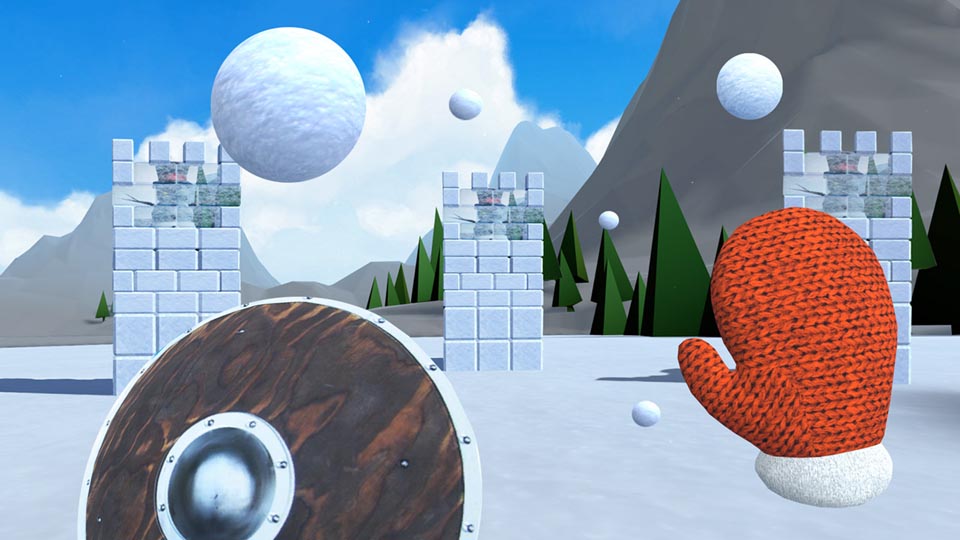 Use your shield to block the incoming BALLS OF DOOOOM!

The is a fun, casual game that gets crazy difficult, which is fine, but when position tracking works against you, and it will, it can’t help but get a little frustrating at times.  That said, when it works, it’s great and a mini workout as you are constantly moving your arms in some way or another to throw, shoot and build.  The lack of multiplayer kills any extended play for myself, as the single player content wore on me before I completed all the missions leaving little drive to return for more.

What would I pay? The lack of multiplayer killed the longevity of Snow Fortress, at least for myself and while the rest of the content is fun, it just gets old.  $10 seems a little more appropriate for this wintery VR offering.