I have no idea what the ideal American dream is and I definitely don’t think what’s being offered here would have even crossed my mind as an ideal fantasy world I’d like to live in.  Without delving too deep into gun issues and having limited knowledge of all the happenings and legalities in America as of late, as a Canadian, it seems like a decent portion of America REALLY likes there guns. The American Dream is made by an group based out of Australia and I feel like they are exposed to the same type of media that I am with regards to guns in America and have made a game that parodies, pokes fun at, and crticizes our views on  firearms today. 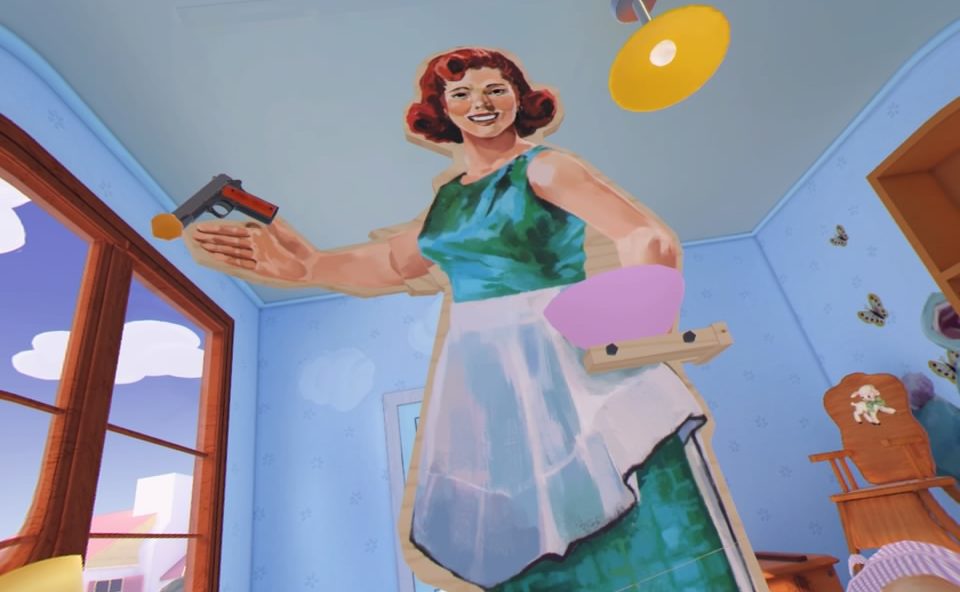 As a child, this iis how I remember my 1st meal!

Suprise, suprise, it’s Move controllers only as you fire at a very wide variety of targets with your dual pistols or a rifle.  A push of the trigger is all you need though I found aiming down the sites to be a tad tricky.  As you progress through the campaign, more scenario specific weapons are given to you, like a sniper rifle,  machine gun or a few other modern day firearms.  Each scenario requires you to (mostly) shoot designated targets to complete a task.  These range from sniping the cardboard cut-out of girl you like, shooting the mud off off cars at a car wash, or just shooting the dinner bell to summon a waiter.  Non-shooting elements include stuff like a dance, gathering cotton candy or feeding a baby with the muzzle of your gun.  It’s all very silly but tracks really well and shooting does feel quite good.  Bullets leave a trace-line so those who just fire from the hip can adjust accordingly if their previous shots missed the mark.

The American Dream takes you through life, from being a new born all the way to adulthood, and picks important moments for you to play through.  As a baby, which is also the tutorial stage, you must shoot a door to get your mothers attention whereupon you must eat food off of the end of the gun.  Playing catch with dear ol’ dad?  When he tosses a ball your way, you need to shoot it in mid-air to send it back to him.  This plays like a carnival ride where you are strapped inside a bumper car and are driven, on rails, to each new stage.  Once you have expended your ammo, or release the clip, buttons on either side of the cart light up and pressing said buttons launches a new clip in the air and time slows down so you slide the new clip into your gun in one, smooth, John Woo style motion.  I loved the slow-mo mechanic as it made me feel like a badass every time I did it.

The best way to clean a car has always been with an automatic rifle!

The American Dream has seen fit to go back to a simpler time, the 1950’s, and while the world around you is ‘real’ enough, the cardboard cut-outs that populate it hammer home that you in a very surreal ride.  Whether it be on the job, at the fair, or the school dance, the stand-ups with mounted speakers play out each scenario is a very dry, comedic fashion.  On your journey the Mascot for the American Rifle Assosication, a dog named Buddy Washington, is at each stage and explains  each scenario in glorious 50’s style PSA fashion akin to the same type of videos seen in the Fallout series of games, and commentates throughout each scene.  It’s very dry humor but works wonderfully within the sarcastic nature of the game and I found myself laughing out loud on more than a few occasions. 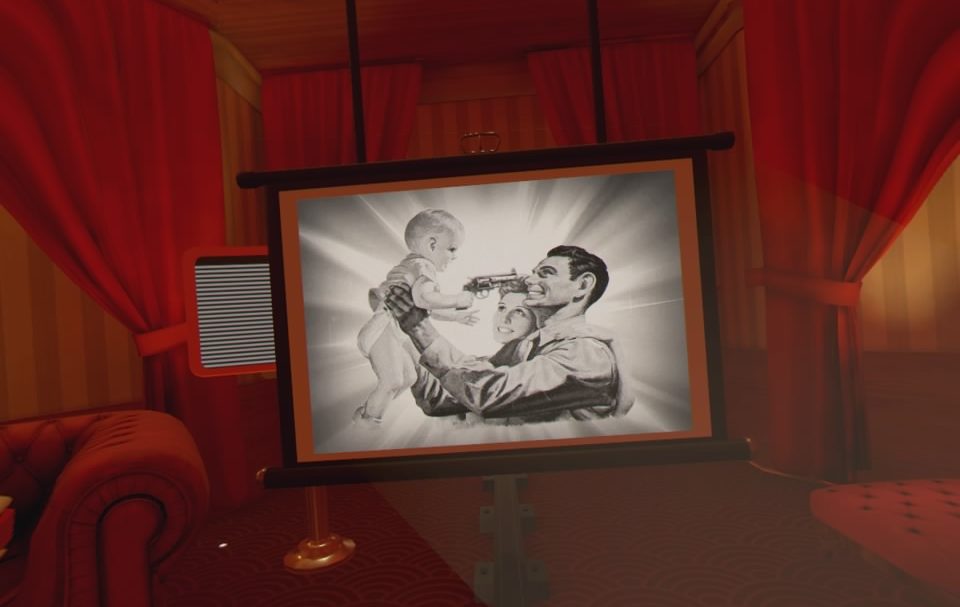 The main theme of the game, imo, is in this picture

This is not a typical shooter by any measure of the genre.  Very rarely are you told to just shoot whatever you want and instead must ‘play along’ with what the scenario asks of you.  At a romantic dinner for instance, you shoot the menu to choose your dish, are given 3 pistols for your meal instead of spoons, each smaller than the last and those are used to shoot the next course in the meal, you summon the waiter by shooting a dinner bell and the scene ends with you taking out a golden gun and shooting the engagement ring on your gal.  Most of the stages play along a similar line requiring you to perform menial tasks that would be incredibly dull save for the fact that they are accomplished by gun play. The American Dream is a very scripted game and I can honestly say I have never played anything quite like it.

Each level also scores you at the end in the form of money($), but as far as I can tell, this is mostly for comedic value as some of the score modifiers included are impossible not to achieve, though it does track your accuracy on certain stages.  Additionally, each stage has a star icon or 2 hidden somewhere which I think just gives you an achievement, but it’s something to look out for.  The campaign should take close to 4 hours or so and not all the scenarios work as well as others,with some being  quite dull.  Some tasks get a little mundane and boredom does set in on a few levels, but for the most part, I was entertained. 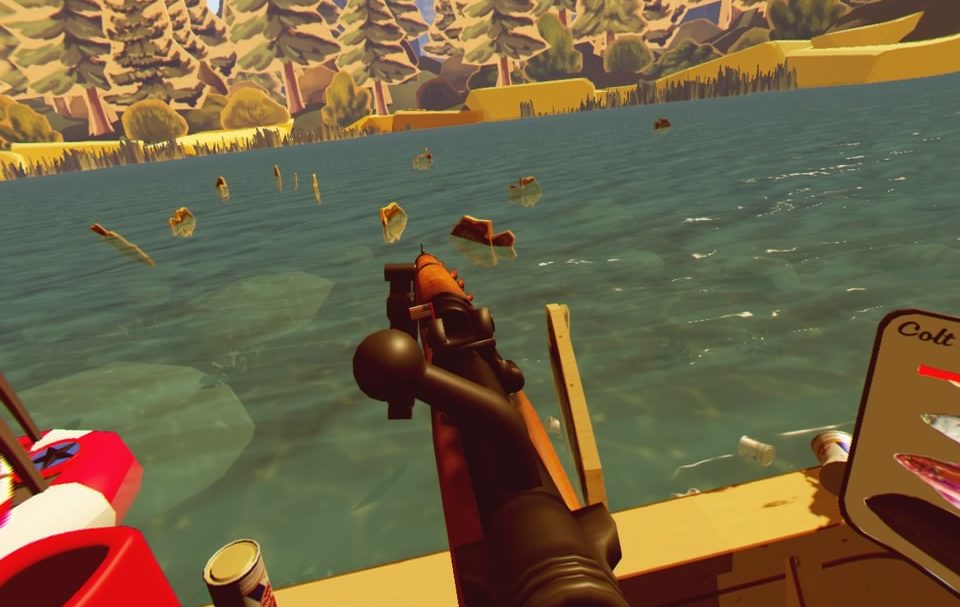 The American Dream, at it’s core, is a message about modern gun culture in America.  The opening stages are very light-hearted and take a much more comedic approach to gun whackiness.  As the you ‘grow-up’ in the game though, darker tones begin to emerge that actually had me a little uneasy.  This is a game with a message about just how absurd the love for firearms has become in the USA.  It’s poigniant, topical and I think most importantly, will make you think about and maybe question your views on guns.  The end of the game was crazy over the top and dragged on way to long, which was obviously no accident as the full brunt of the games theme is hammered home in an unrelenting fashion, though even with that last drawn out sequence, I appreciated what the game was trying to get across to the player.   Creating a shooter with a message like this is definitely odd and rarely done for obvious reasons, but in my humble opinion, works great and does what it sets out to do, make you think while keeping you entertained.

What would I pay? I think the $20 is more than fair fr this.  It has a fair bit of content for that price and is the one of the more unique games I have ever played in my life.  The overall messsage is pretty serious, but the sarcastic way it is presented makes this more fun than preachy.