One of VR’s great success stories, I Expect You to Die has now gotten a follow-up, doubling down on the puzzles, action and super spy goodness that made the 1st so popular.  You’re back in the role of a special agent, thought dead after the events of the 1st game and are still tasked with thwarting Zoraxis who is till trying for world domination.  One minor note for this review is that I will be avoiding nearly ALL spoilers for the game including specific level interactions, plot and anything else the could spoil the fun. 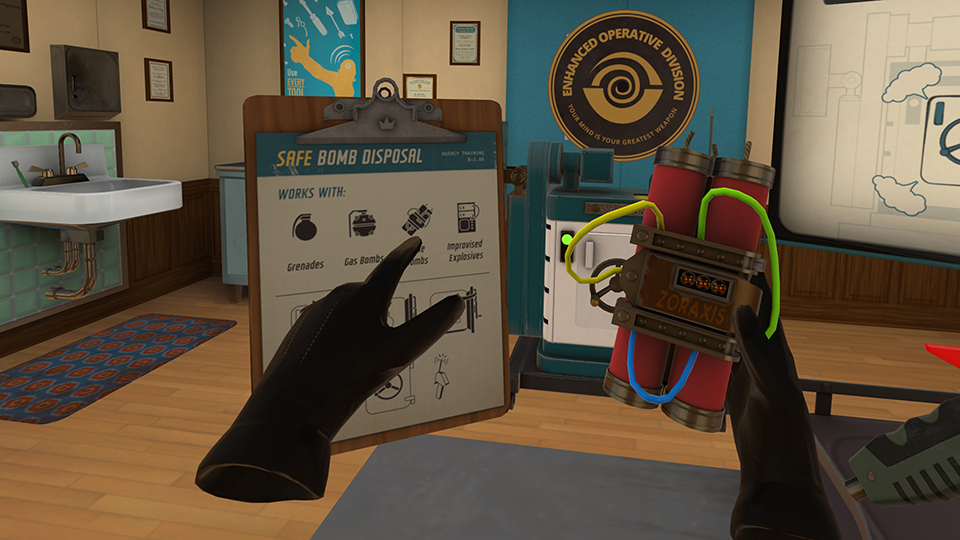 Those who have played the 1st game will be instantly familiar with the game mechanics as this feels almost exactly like the 1st title in almost every way.  It’s a seated, room scale affair that requires you to be observant of your surroundings and what you can interact with.  Should something be out of reach, you can use your telekinetic abilities to grab it and pull or push it away from you, letting you further mess around with stuff beyond the comfort of your chair.  A tutorial reintroduces the basic elements of the game with each of the 6-stages basically acting like an escape room, with you having to perform a variety of tasks to not only save the day but yourself.  It’s that trial-and-error mechanic that made the 1st game so rewarding as even in death, there is reward as you’ll oftentimes die in comedic fashion and learn not do make the same mistakes twice.  Each mission has hidden trophies to find, and a speed run time attached to it for those that enjoy that sort of thing, extending replay factor if you just can’t get enough espionage goodness.  In between missions you’ll find yourself in a van where the details of your next operation are revealed, and you can always revisit any previous missions. 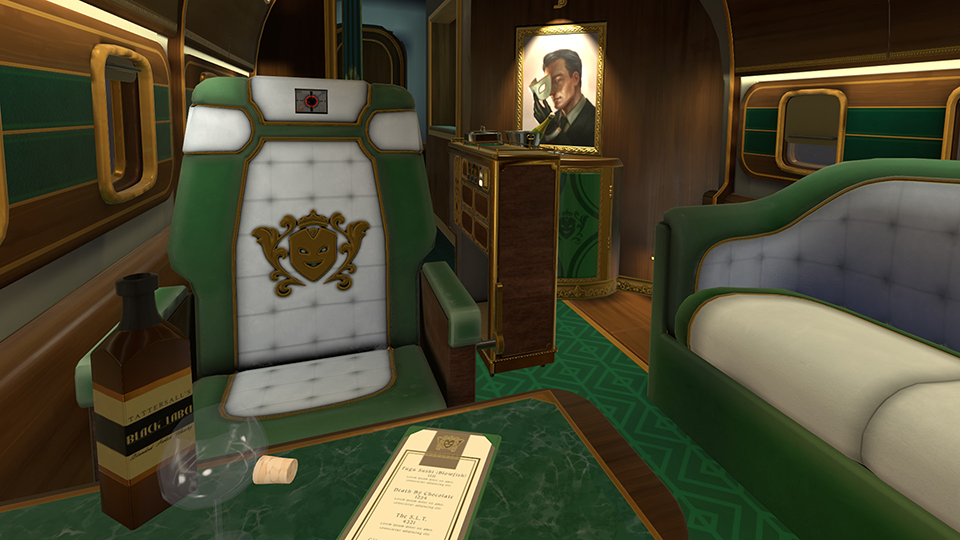 Further embracing it’s James Bond roots, you are treated to a very slick intro that essentially puts you in the song and as a fan of Bond films, it’s a damn cool song that uses VR in some very fun ways. Where the game may lack in environmental scope, it makes up for in polish as the details that litter each stage are commendable and enjoyable.  From the opening tutorial office, behind the curtains at a theatre performance as a stagehand, on a private plane and a few more locations that I won’t spoil here, everything in here looks great and, in my opinion, even a little larger than the 1st game with set pieces that feel a little more fleshed out.  In no way am I trashing the 1st game, which is great, but I found the stages in here to be just a little more…complete.  It’s always fun to see what the results of your actions are and what the game will throw at you as you never really know what’s going to try and kill you next.

Your handler is back from the 1st game, guiding you with aristocratic English accent with a few other actors sprinkled in as well with one notable addition to the game in the form of Jon Juniper played by veteran voice actor and Trek alumni Wil Wheaton who does an excellent job at bringing a different kind of vitality to the game thanks to his duplicitous charm.  Beyond the voice acting and kick ass intro, is a game that relies heavily on the sounds around you with brief tunes only kicking in when you solve a puzzle or perish so whether it’s the sound of an incoming poison dart, deadly laser, or the air getting sucked out of an airplane cabin, the sound design is on point and is for all intents and purposes, flawless 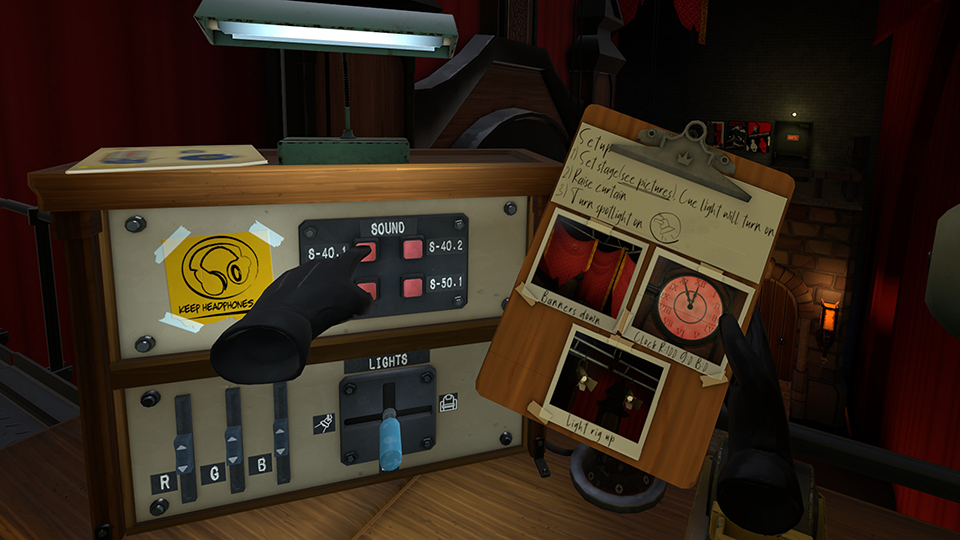 As a stage hand, you have a few jobs to take care of.

Just like the 1st game, each mission won’t take more than a few minutes to complete provided you know exactly what to do but unless you watch a walkthrough before you play, which I don’t recommend, each mission will take much longer to get through…I’d say at least 30 minutes each, if not more.  That trial-and-error mechanic is the main draw, especially when some obstacles have a couple of solutions, allowing for a little bit of creative freedom in solving those dilemmas.  The game is room scale, but before you Quest owners start trying to run around the environment your actual play space is limited and venturing too far in any direction, even standing will result in your vision going black forcing you to return to confines of the play space.  This makes perfect sense but in 2 instances in the game, there were buttons that were just out of sight, and I was forced to half stand to see them fully or raise my hand very high to use my telekinesis which made those moments awkward, but never once was I stuck or did that hold me back, so it’s really a minor issue at best.  In truth, this next entry in the franchise feels like it could have just been 6 more DLC missions save for the overarching plot that links the story, which should appeal to fans of the 1st game as it picks off where the last game left off and felt instantly familiar the moment I put on the headset. 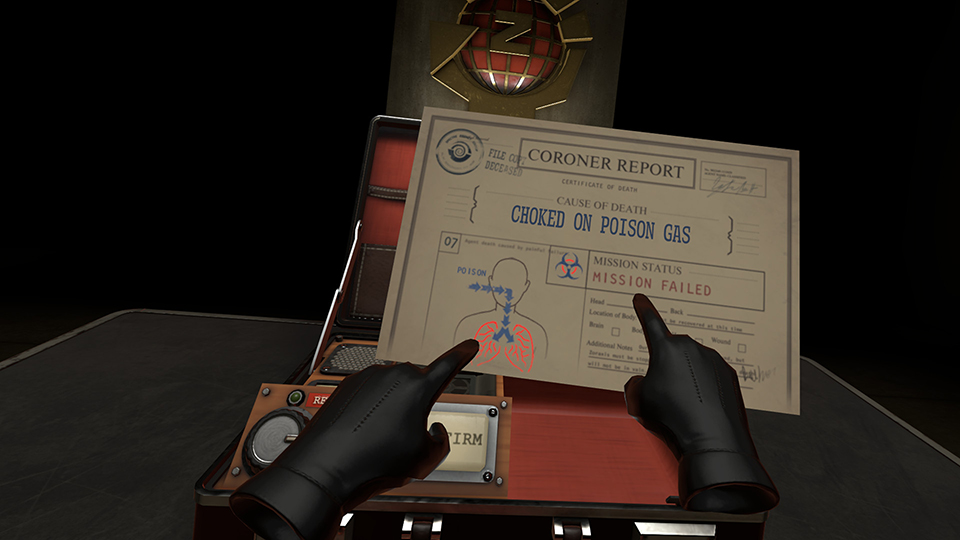 IEYTD 2 doesn’t really tread any new ground when compared to the 1st game but builds upon the mythos of the spy world and is a still a welcome addition to what is now a franchise.  The puzzles are clever, unique, and fun and even in death, I couldn’t help but smirk at my own shortcomings before I hit that replay mission button to give it another go.  It’s addictive, rewarding and made me feel so smart and so dumb as I slowly deciphered the solution to the next puzzle, dying a whole lot along the way.

What would I pay? $25 is a perfect price for this.  I expect most people won’t get through the game in less than 3-hours and even offers some replay value for those completionists out there or those just want to see how fast they can get through the game.

Schell Games provided The VR Grid with a press code for this title and, regardless of this review, we thank them for that!