Half-Life is back and exclusively for VR in this prequel to the events in Half Life: 2.  Unlike previous titles in this franchise, you don’t play as Gordon Freeman but as Alyx Vance, a young woman met in the second installment of the series who is part of the resistance against The Combine; an alien race that has subjugated humanity.  As a member of the resistance, it’s up to you and your cohorts to fight back against your oppressors all while trying to survive in the strange futuristic world. 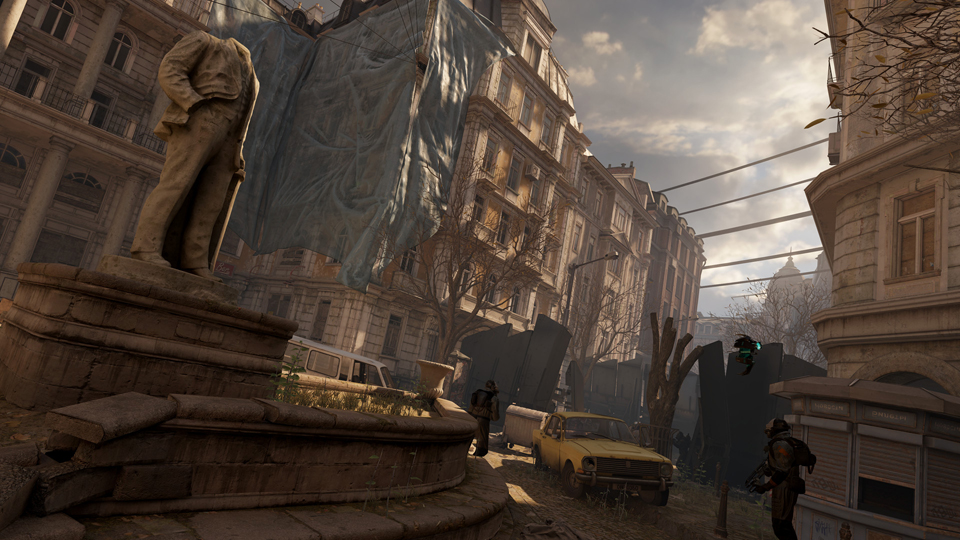 Welcome back to City 17!

Like any typical VR shooter, thumb sticks are used to navigate the environment with the other buttons and motions used performing a wide variety of tasks.  Click or smooth turning is now available thanks to a post launch patch with game being designed for smooth walking, though a teleport option is available.  Very early on you get a pair of gravity gloves that allow you to pull smaller items toward you with a flick of the wrist.  It’s a clever way to navigate around tracking issues when it comes to grabbing items off the ground as it’s also a throwback to the now classic ‘Gravity Gun’ from the previous games, though doesn’t hold anywhere near the power of that awesome weapon.  Weapons are in your dominant hand (right for myself) and the press of the thumb stick lets you choose from your arsenal from an in-game holographic menu which works well enough, but took me a little while to get used too as it can be a tad clunky at times.  Pushing down on the right thumb stick allows you “jump” onto surfaces that are a little lower or higher or can just be used to get through smaller entrances as it really behaves more like a small teleport system, slightly disguised as something else.  Each wrist can store 1 item like a health syringe for partial health, a grenade, alien bug filled canister which can be used at health stations scattered all around or some of the random stuff you may need to unlock doors.  A hacking tool is also at your disposal allowing you to unlock technology through a series of random mini-games that involve matching shapes, lining up laser lines and a few other variations which are a fun distraction, but a bit silly when you think about exactly what you are doing in that moment. Beyond all that this plays very much like Half-Life 2, only brought to life thanks to VR and while the environments aren’t 100% interactive (more on that later) there is plenty of stuff to touch, grab and throw and with that adds levels of immersion to this series that couldn’t work on a flat screen. 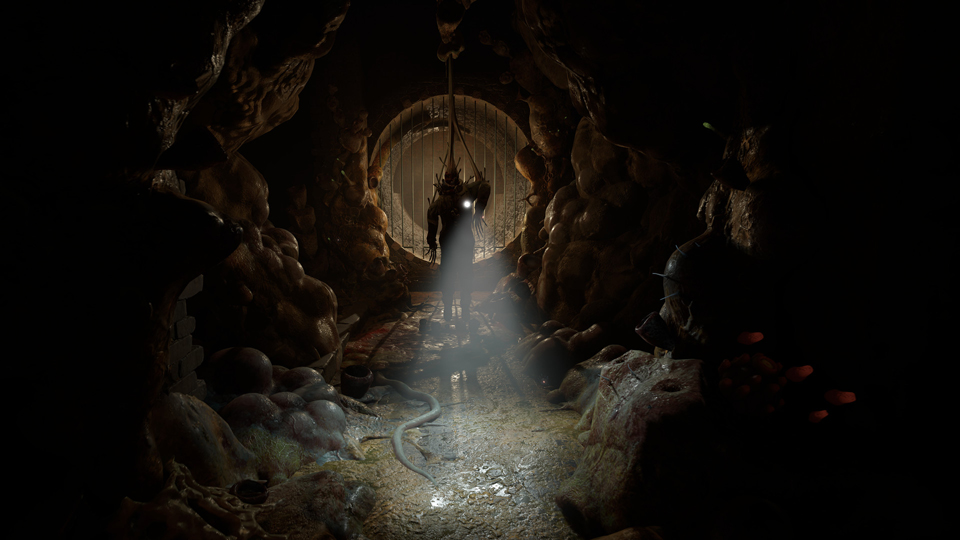 You ever get to relax in this game…ever!

Above anything else, Half-Life Alyx is nothing less then stunning when it comes to bringing City 17 to our headsets.  When you have a high vantage point it seems like you can see for miles and while most of the game takes place in more confined settings, these smaller settings are just as impressive, if not more.  The opening moments have you on city streets, watching as the Combine herd people through them while Striders walk overhead, and I couldn’t help but be awestruck at just how amazing it was to actually be in the City.  Creeping through ruined tunnels, doing my best to avoid the absolutely disgusting barnacles and their hanging tethers or narrowly avoiding a jumping head crab as it launches itself at my face are just a few examples of the next level intensity that makes these moments so immersive.  Certain sections of the game offers up grotesque surroundings as other alien lifeforms (collectively known as the Xen) try to establish their own foothold on Earth.  Lighting and shadow effects don’t get better then what’s on display here with every surface reacting to any light source with near perfection.  Early on you find a flashlight which automatically turns on during darker sections and however unnerving you thought Ravenholm was in HL:2, VR intensifies that feeling 10-fold as around every corner could hide the next head crab or zombie.  Your resistance companions, and really all character models, look on point and also animate wonderfully carrying some excellent mo-cap and facial animations that accentuate just how far gaming tech has come.  I could go on and on about just how good this game looks and that added nostalgia factor only makes it that much sweeter as it feels like a familiar yet entirely new experience. 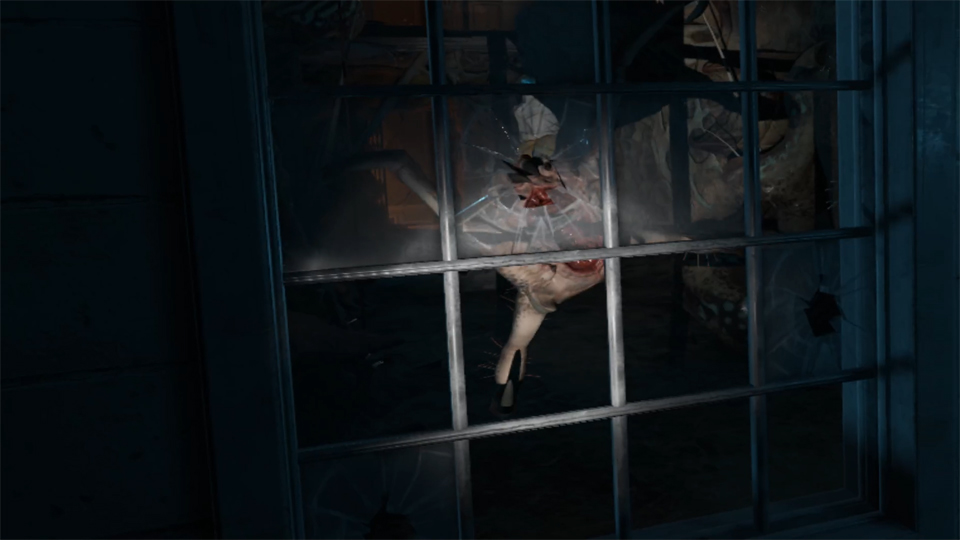 I think he wants a kiss.

Surprise, surprise the audio presentation is equally on point with everything sounding exactly as you remember it from the previous Half-Life chapters.  A few cast members return from the last games though most of the cast is new but in no way does that take away from the experience as they all do amazing jobs.  A new character introduced is Russel, whom you meet early on and is in constant contact with you on your journey, adding non-stop humor as he breaks down every situation using cold awkward logic that makes his ambivalence endearing and maybe just a little disturbing. You’ll need to rely upon the 3D audio, which is also outstanding and thankfully so, as the only indication of a nearby enemy may be the subtle clicking of a head crab or the nearby grunts from Combine soldiers.  The music is typically cinematic and while you don’t always notice as it plays subtly in the background at times, it matched whatever is happening in the game making it fit seamlessly. 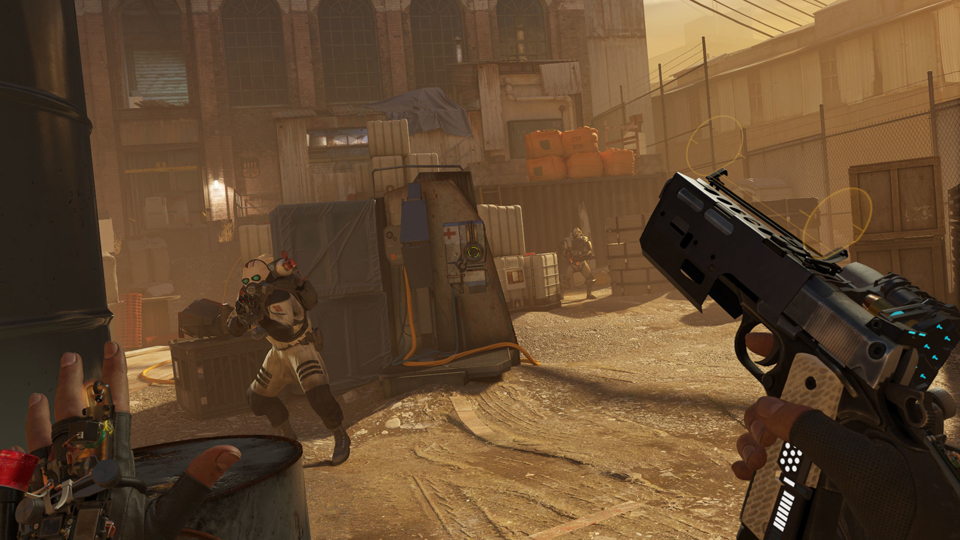 Alrighty, so as much as I’m loving this game, there are issues to bring up that do impact the game and what we expect from VR shooters.  There is also no run button so Alyx, regardless of the situation, can only move at a steady pace and while it’s not too slow, the fact I can’t run from cover to cover to try and avoid enemies seems like a very odd omission.   Only being able to store ammo over your shoulder in a backpack is also a little silly and inventory issues will soon pop up when you factor in that each of wrist compartments can only contain 1 item each, which means you’ll have to choose between health, grenades or an item needed to bypass the next obstacle which is a tad ridiculous considering the smaller items are no bigger then a credit card AND YOU HAVE A BACKPACK!  Other very minor qualms to bring up, though in truth I did not take offence to them, is what you can interact with and what you can’t.  You can grab boxes, barrels, cans and a host more of the debris scattered around but a nearby portable ladder that looks grabbable is not.  There is no reason to grab that ladder so it’s irrelevant but those expecting a 100% realistic interactive world may need to check those expectations.  Next up would be the lack of a melee option which really confuses me, especially considering the franchises roots and use of a crowbar.  I had a large metal pipe in my hand, got in my swinging position and cracked that stupid zombie right in the head…only to watch my pipe pass right through him.  Panicking, I threw the pipe at him to which it stumbled and reacted as if I tossed a pipe his way making it very odd that close combat just isn’t an option in this game.  Lastly would be just how prolific ammo and resin (the currency needed to upgrade weapons) is, as they are literally just lying around everywhere and while some are a challenge to find requiring you to explore every nook and cranny, others are just lying in plain site for no good reason which was more odd then anything else.  None of these issues come close to ruining the game but they feel restrictive enough to be worth mentioning, but if you stick within the “rules” of the game and play like this is just a shooter, you’ll be able to ignore most of these hiccups. 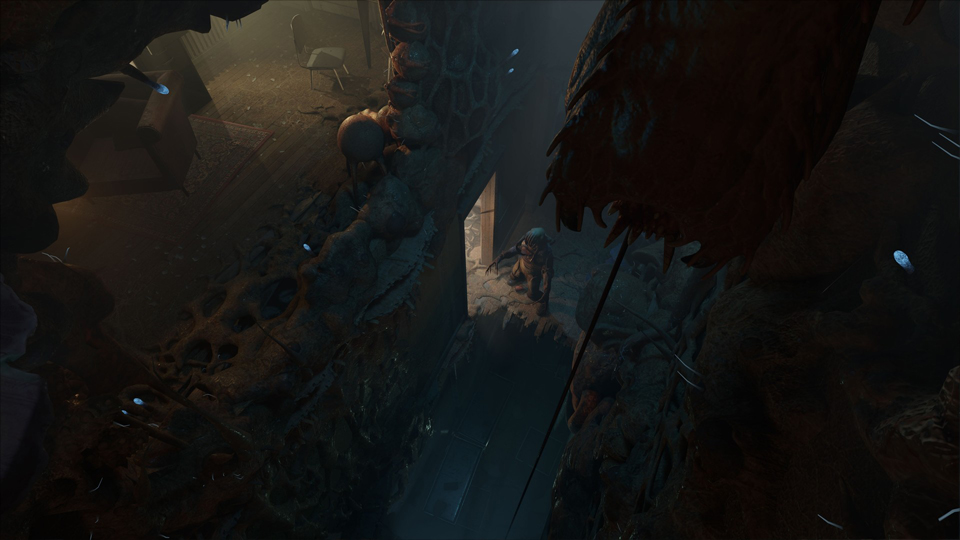 Everything is much more gross in VR!

With that bad out of the way, I’m am absolutely loving just about everything in this game.  The combat is intense, the weapon upgrade system is rewarding as searching for all that resin pays off in a big way with each upgrade dramatically increasing each weapons effectiveness.   Creeping through those tight areas is next levels of scary thanks to VR and getting in full on fights with the Combine with bullets flying all round you, Manhacks (drones with rotating knives) rushing at you from all directions while you scramble for cover is all undeniably awesome.  Revisiting Half-Life in VR is a dream come true and while it’s not perfect, the level of quality and care that has gone into this is rare making it an instant VR classic.  The campaign should run you anywhere from 12 to 15 hours (I was on the 15-hour side) as you roam through the city with the game only getting more epic and awesome the further you get.  For those looking forward to the NEXT chapter in Half-Life, this might not quite be what you were wanting after the end of Episode 2 but it is an amazingly immersive experience that expands upon the story with almost everything from the previous chapters being improved upon or amplified thanks to virtual reality.

What would I pay? This is $60 US and worth every penny.  More AAA developers need to pay attention to this kind of quality when it comes to VR and up their efforts.  It raises the bar with what we should expect from larger VR titles and well it takes a few missteps, it still is some of the most fun I have ever had gaming, in or out of VR, and is a must play for anyone not adverse to first person shooters, regardless of your familiarity with the franchise.