FINALLY…..WE FINALLY have our 1st full VR Star Wars Game that maximizes the medium without regard for comfort or gameplay limitations that cater more to the experience side of Virtual Reality.  Ever since I got my 1st taste of what it feels like to be at the helm of an X-Wing, alllllll the way back in 2016’s Battlefront VR DLC which is a short 20 minute experience, I couldn’t wait to get my hands on a full game in the space dog fighting genre.  Alas, it didn’t seem to be as Electronic Arts seemed content to ignore VR and thus, crush my dreams.  Well, Squadrons changes everything as we get a new adventure in this iconic universe that takes place shortly after the events in Return of the Jedi and has you in the role of pilots in both The Empire & The New Republic in a plot with consequences that could affect the balance of power in the galaxy…oh, and their is some multiplayer content in here as well!  This review will exclusively cover the VR gameplay and presentation but the entirety of this game is available to play out of VR. 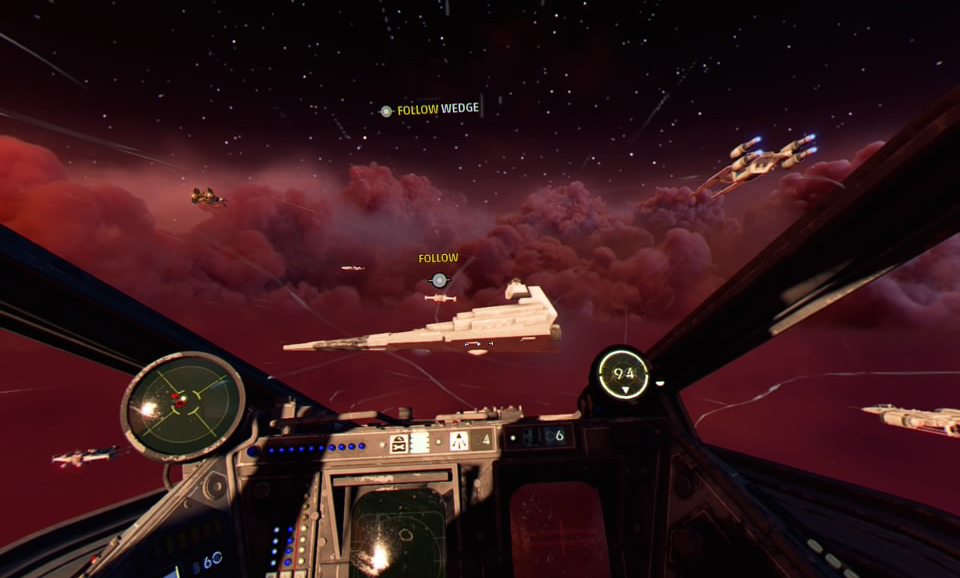 Some og the scale of these ships is incredible!

As far as the PSVR goes, your 2 options for controls are the DS4 or a supported HOTAS peripheral with either behaving more or less as you would expect in a flight sim.  There are some issues with button mapping and while I did mess around with a few of the control options, I ended up sticking with the default settings and just powering through until it felt natural, which took about 2 hours of game time.  Either way, there is no controller tracking in here though the HOTAS does offer a little extra immersion thanks to the in-game throttle and joystick matching your real-world actions.  The campaign puts you in the role of a rebel and imperial pilot in a plot centering around a commander who betrayed The Empire.  The 14 stage campaign will take roughly 10 hours to get through depending on your skills and difficulty played with bonus objectives tied to each stage should you be looking for a little extra challenge.  During the campaign you’ll be introduced to the various ships each faction uses as well the various abilities like managing shields, power, ordinance, squad commands and a host more options with the game having a ton of depth when you finally see all the options available to you.  In between each mission you can talk to some of your comrades who will talk about your last mission, the next one or just reveal a story from their past.  Mission briefings take place around a holo-table, exactly as they would in the films making for an experience that feels very true to the original trilogy.   Throughout the campaign you’ll find yourself in a variety of situations from full on assaults, escort missions, base defence and a few other fun switch-ups that help keep the campaign from getting too stale. 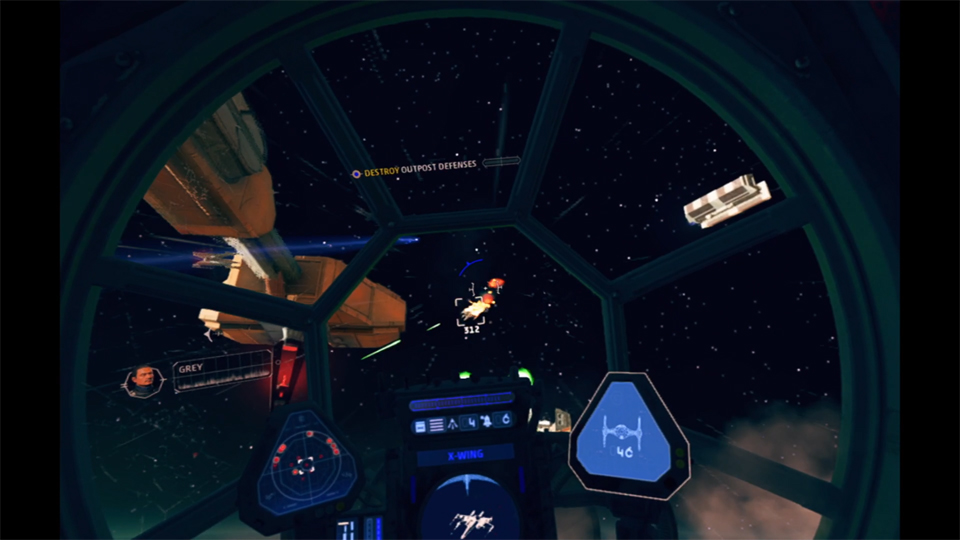 Line ’em up and take ’em down!

Beyond the campaign is a 5 v 5 multiplayer mode called Dogfight  that pits Republic vs Imperials in some classic team deathmatch action with the 1st team to reach 30 kills winning the match.  There are 6 maps currently available with each being very distinct from the others with some being more open while others provide a ton of cover and thus obstacles to use or avoid.    The second mode is fleet battle, which plays very similar to Dogfight, but instead you must take out the enemy ships in specific order and destroy their flagship to get the win.  I’ll stress here that while it’s easy to just jump in and start playing, the challenge in multiplayer is substantially larger than the campaign, especially against those who have mastered the use of counter measures, drifting, power cycling and just becoming familiar with each factions 4 different ship types, which can be customized to your preference by modifying components which will boost 1 aspect of your ship at the cost of another.  I do wish there was more than just the 2 modes available here, especially with the rather small map selection, but even still, I was having a blast playing with friends, levelling up and on a few occasions, feeling like an ace pilot as I placed 1st placed amongst my allies and the competition.

So, the big question is how does this look and I’m happy to say that Squadrons looks damned fine in VR on PS4 Pro but still showcases just how outdated the PSVR headset is becoming.  The inside of your cockpit is nothing short of flawless when it comes to every minute detail making you instantly feel like you belong behind the throttle.  Shadow effects as I flew near engines or other light sources instantly immersed me as they really are impressive and go a long way to placing you in this universe.  Outside of your ship though, things take a bit of a dive as the further things are away from you, the fuzzier they get.  Don’t get me wrong, when I was skirting the surface of an enemy Star Destroyer or narrowly avoiding a collision with another ship, I felt like I was there and everything looked amazing and nothing is more thrilling than a head to head battle with a tie-fighter before blowing it to bits and flying through it’s explosive remains before moving on to the next target.  That said, there are moments in here when the background may look like little more than a JPEG or when an encroaching ship is a mishmash of grey until you get much closer.  By no means do those moments ruin immersion, but they are a tell tale sign that Sony needs an upgraded headset sooner than later.  Character models look fantastic and animate nicely and reminded me very much of the models in Blood and Truth which is a compliment.  You also have a fully animated body and while it’s not tracked in any significant way, it still adds to your presence in the game.  Cut scenes, unfortunately, aren’t’ in VR but are presented in a theatrical fashion with you looking at an enlarged screen as if you were in an all black theatre, but once again, this really isn’t too much of a deal and they look great too. 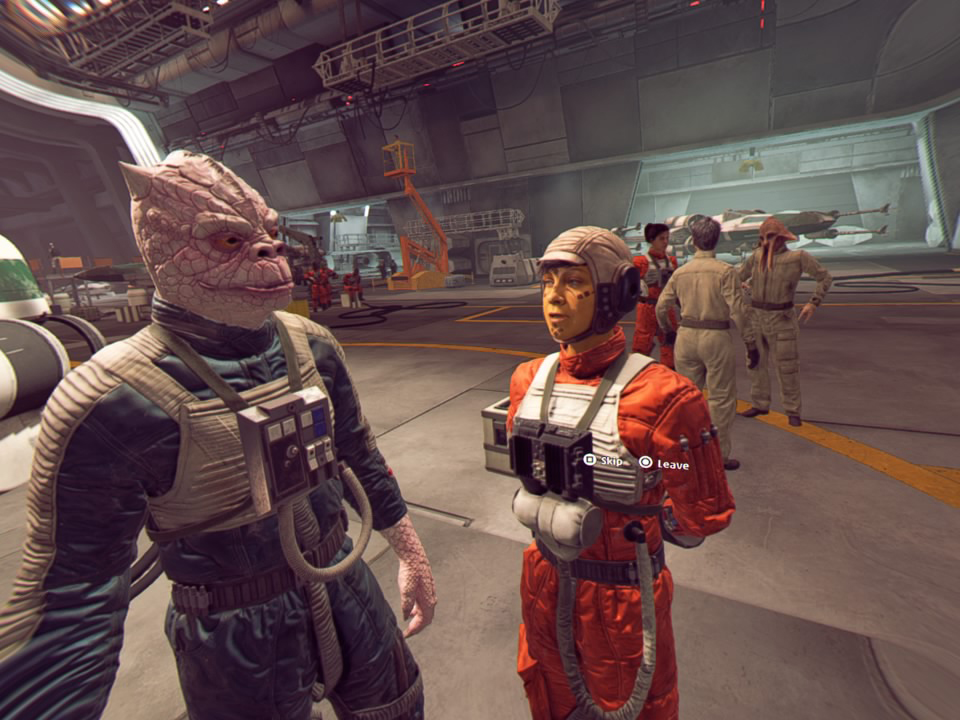 Say hello to a few of your New Republic squad mates.

If Star Wars games always get 1 thing right, it’s the audio and Squadrons is no slouch in that department with the classic score at play that fits perfectly with the action.  Voice acting is top quality with every character acting authentic and believable which is highlighted when you decide to talk to your comrades in between missions.  3D audio is also on point and while I always recommend playing VR games with headphones, I highly recommend it here as there is really nothing quite like a tie fighter blazing past your ship in all it’s audio glory.

Squadrons largest hurdle has to be the learning curve as there really is a lot to take in and then remember, especially when it comes to the multiplayer side of things.  The campaign slowly reveals all the nuances to flight and combat but even with those slowly learnt lessons, it took me quite a while to get familiar with all of my options.  There is also some annoying screen flickering while inside that headset that occurs throughout the game and more often during the hangar sections, though I only saw it a handful of times during the flight sections.  I would have also appreciated 1 or 2 more multiplayer offerings as what’s here is fun, but I found still, got old sooner than later thanks to the 6 maps shared across both modes and the lack of communication from fellow players.  That said, unlike many other VR multiplayer games, thanks to cross compatibility between console and PC users as well as being available in or out of VR, the user base seems very high right now and I never had any problems finding a match. 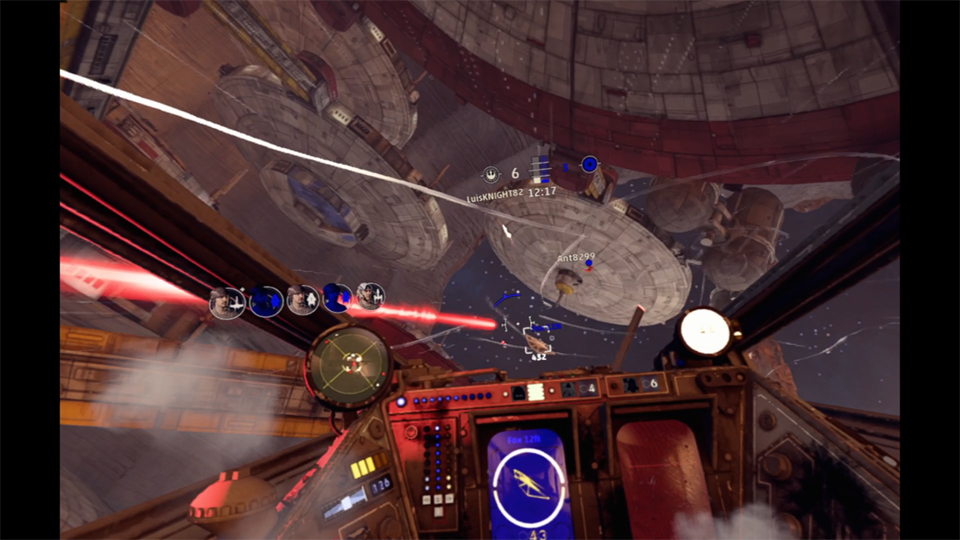 Multiplayer battles are a blast!

Squadrons is nothing short of a dream come true for VR fans and it is, for all intents and purposes, a feat when it comes to Virtual Reality.  The developer MOTIVE seems to have a  solid understanding of VR and caters to those 1st donning a headset as well as veterans who can handle full immersion.  For those of us who have been waiting for a proper space dog fighting sim, this should do you quite nicely and having it take place just after the original films allows any of us familiar with those movies to immediately feel caught up to the story and action.  The campaign is satisfying, the multiplayer combat is fun and the fact that it carries the polish of a AAA title has me very impressed with just about everything offered up here.

What would I pay?  This is $40 US and that’s an easy price to justify the content at launch.  It’s not perfect but it pretty much met every expectation I had and more often than not exceeded them, making this a title I highly recommend.