Shooty Fruity is a wave shooter unlike any other and that, in this case, is a very good thing.  Wave shooters have become synonymous with VR and with so many being released, most people just malign the genre.  Well, every once in a while, a game comes a long that just gives a genre a fresh coat of paint (or fruit guts in this case) and Shooty Fruity is just that, mixing together some job simulation elements with some top-notch dual wielding action. 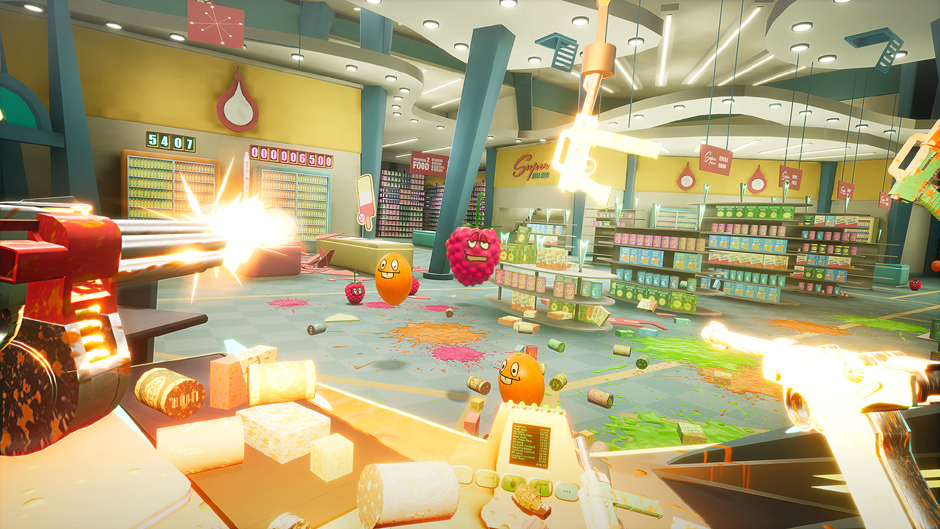 If fruits guts were blood this would be an insanely gorey game!

You’re going to need 2 Move controllers for this one and after a few rounds you’ll probably be wishing for a 3rd.  You are a clerk in a super market, at least initially anyways, and you job is to scan groceries as they come toward you on a conveyor belt, once you scan an item you need to place in the correct chute to score.  Scoring gives you points and increases your weapon load out.  While you scan items, deadly fruit hops, rolls and flies toward your station and you need to turn them into juice before they destroy all your stuff.  The more items you properly scan, the more weapons appear on the racks at your head, and as there is no reload, you need to make sure there is a steady supply of guns coming your way.  Later missions also mix up the gameplay by having you sort items instead of scanning them, which is even more challenging.

To say the action gets intense is an understatement as fruit assails you from all sides but behind you, keeping you on your toes and never giving you a break.  Thankfully each stage offers up cash to be spent on a vending machine loaded with weapons.  From here you can head to the locker room and select your layout from your unlocked arsenal.  There is a shooting range where you can test your weapons out against cardboard opponents, but I found the best way to test a weapon is against the real enemy.  Also available are some power-ups, unlocked with better performance in-game, which boost the power of you weapons and a few other awesome abilities. 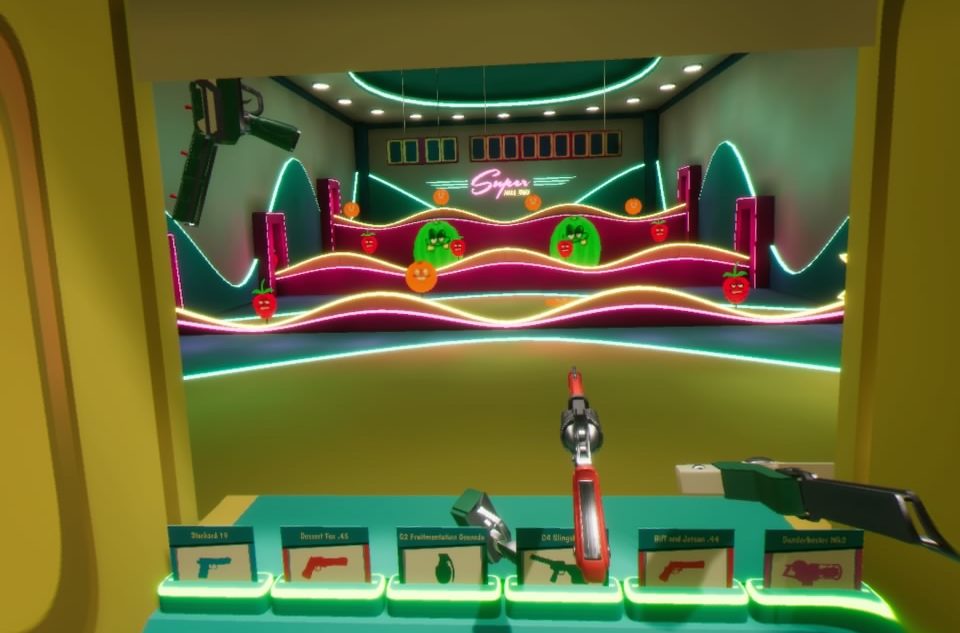 The shooting gallery is OK, but pales in comparison to the main game

Shooty Fruity looks good utilizing some nice cartoonish art styles and throwing them in your face.  The different kinds of fruit all look hilarious and showcase happy, sad and angry face as they inch ever closer.  There is an undeniable level of polish here that makes this a joy to play through.  Fruit comes in all sizes from small lemons to giant watermelons and each are also more susceptible to certain kinds of weapons so experimentation is key.  The guns look great and each shot fired, no matter which gun you are using (minus like 1 or 2), feels powerful and authentic.  The first time I fired dual machine guns, I laughed in both glee and awe as my screen lit up and I annihilated my foes.  The stages are littered with items that can be shot and destroyed giving a real sense that you are in fact, in a real store full of mostly perishable items.

The tongue-in-cheek nature of the game has a very deadpan lady bemoaning your failings and applauding your successes.  She will tell you about new unlocks and is your guide through the games subtler intricacies.  The music is straight out of an elevator, but fits perfectly with your surroundings. 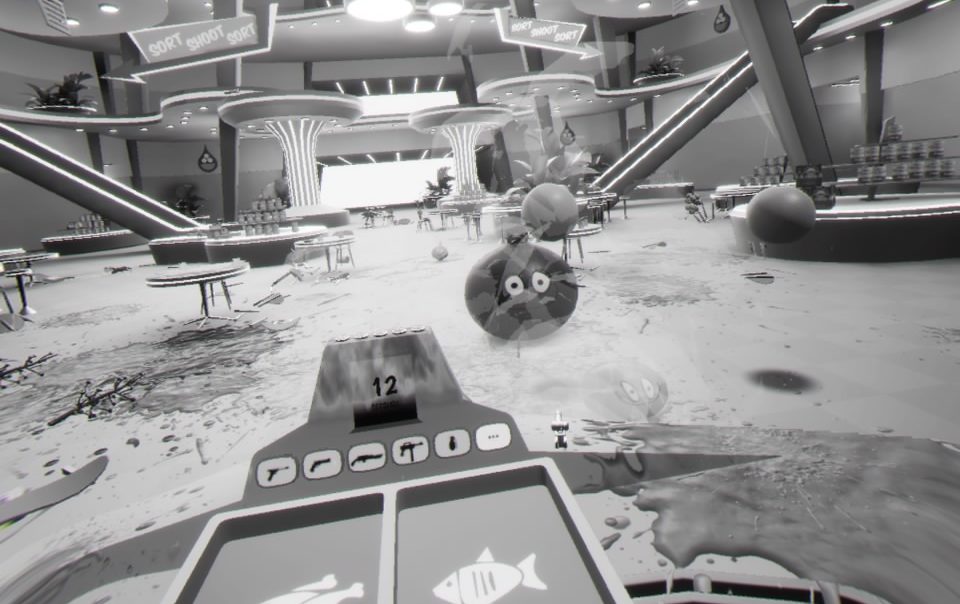 Upon defeat you are treated to a black and white screen and the fruit smiles and laughs at you…I hate when that happens.

The presentation conceals just how hard this game actually is and only after 4 or 5 stages was I really beginning to feel the pressure being applied.  Shooting is easy enough, but when combined with the need to constantly grab new weapons, toss away the old ones, scan/place items and keep an eye all around you, it gets absolutely nuts.  Practice is your only friend here, and maybe a break or 2. I’m not joking when I say this is one of the most challenging shooters I have ever played and while the 20 stages may seem a little light on content, I can assure you that there is more than enough game here to keep you busy for hours and hours (roughly 5 for those who are counting).

Each stage offers 3 goals to hit, in the form of stars.  These goals can be simple, like scan 15 items, or to survive a level with a certain amount of health.  It’s important to pay a little attention to these as the stars you earn are used to unlock more missions.  I was forced to replay more than few levels more than a few times, just to get enough stars to unlock the next stage.  I’m not the biggest fan of this progression mechanic, but given the skills you will need in the later levels, the extra practice isn’t necessarily a bad thing. 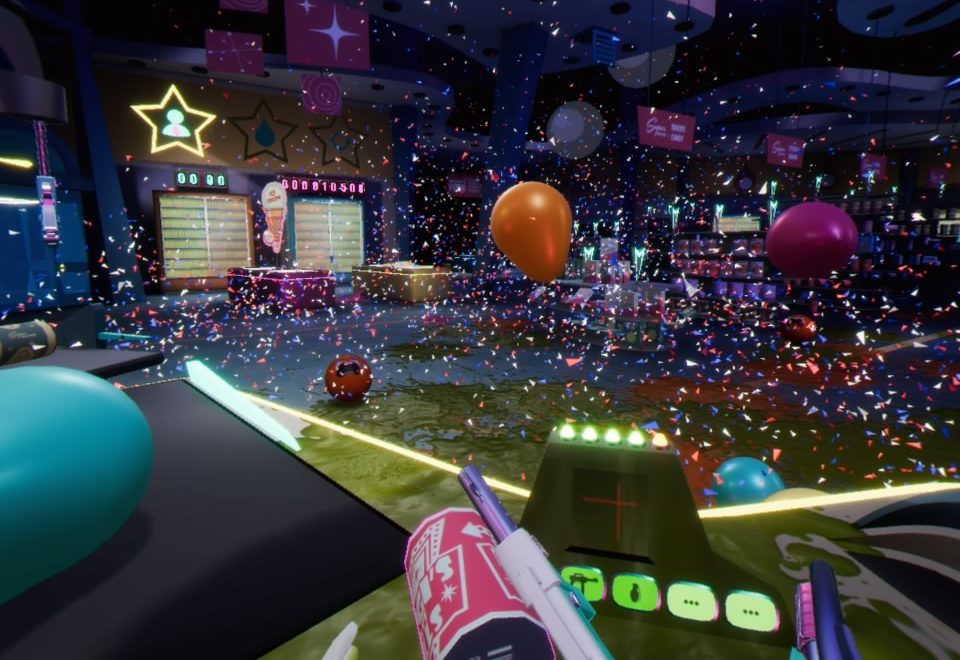 Victory is always a celebration, and you can even play with the balloons!

I thoroughly enjoyed my time in Shooty Fruity.  It’s an over the top wave shooter with a tonne of polish and charm and those looking to challenge their multitasking skills are sure to pull a lot from this.  That said, this is no easy game and will put your VR skills to the test so be warned, you may get a little frustrated at how many times you will fail.  Shooty Fruity is also way ahead of its lighter, comedic wave shooting competition and is one of those games that may just make it to the top of your ‘I gotta show my friends this’ list.

What would I pay?  This is easily worth the asking price of $20 and I highly recommend Shooty Fruity to anyone looking for a fun and challenging wave shooter.  It’s a blast!

nDreams provided The VR Grid with a review code for this game and, regarldess of this review, we thank them for that!