We’ve gotten our fair share of bullet hell VR titles like Space pirate Trainer, Blasters of the Universe and sooooo many more with almost all of those titles requiring you to move your body to dodge incoming attacks.  In YUKI you take control of said character, a space ranger, and must navigate her through this on-the-rails (esque) shooter as she tries to restore balance to the galaxy after Yokaliens have robbed the universe of its most precious resource, Creative Drive. 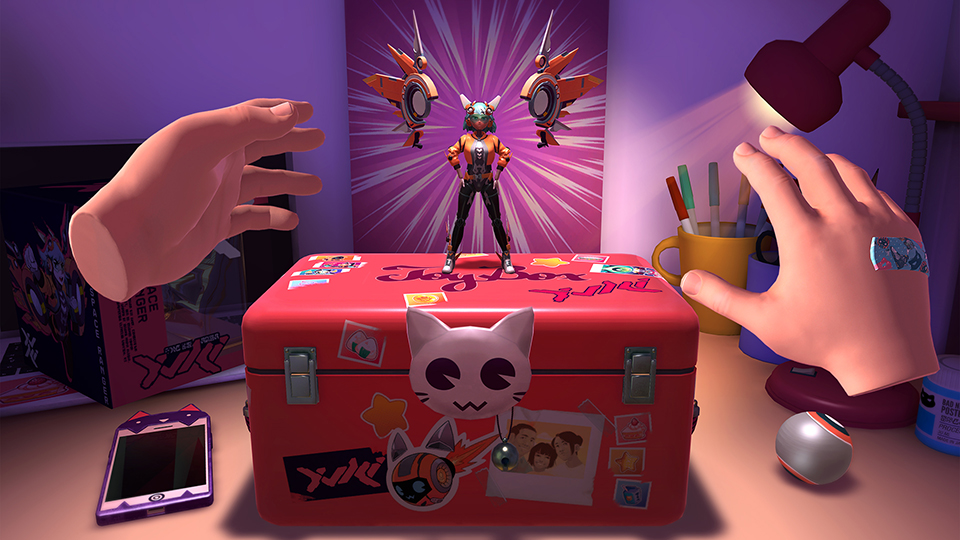 Truth be told, YUKI plays like a 1st person VR shooter with you physically grabbing Yuki, who than acts like your gun and must shoot and dodge the enemies in your path.  Yuki, however, is the star of this show as enemies will target her and her alone with obstacles popping up in each stage that must be avoided lest Yuki take some damage.  For those that played ARVORE’s previous title, Pixel Ripped 1995, this plays like, and was inspired by, the ‘Star Fox’ stage in that game, only with the chaos turned up to 11!  Initially Yuki has only 1 set of Blade Wings available, which change up Yuki’s shot type with more being unlocked by getting further in the game (I think!?) so while the default is a straightforward medium powered shot, you can unlock enemy seeking shots which are weaker but never miss, power shots with a much slower fire rate with 2 more surprises that I have yet to unlock as of this review.  As this is a rogue-like, each run will be unique so while you will navigate the same themed stages in order, encounters and power-ups will differ each time you play.  Yuki is armed with a temporary shield which will automatically recharge once used while your left hand controls her ally, Pod, a small robot who doesn’t take any damage but can still be used to pick up Creative Drive drops, snag floating orbs that give Yuki bonus abilities for that run and launch a freeze attack that will suspend all the enemies on the screen from moving or attacking.  Those bonus abilities can range from increases in health, armed drones, Creative Drive and many more choices that you can tailor to your play style.  The Creative Drive you accrue in each stage can be used in between attempts to purchase permanent upgrades and unlock temporary ones that could show up on your next run.  One complete run won’t take more than 30 minutes to get through but developing your skills and levelling up Yuki enough to get there will take anyone playing this substantially longer than that…I’m currently at the 3-hour marks and have almost made it to the end a few times. 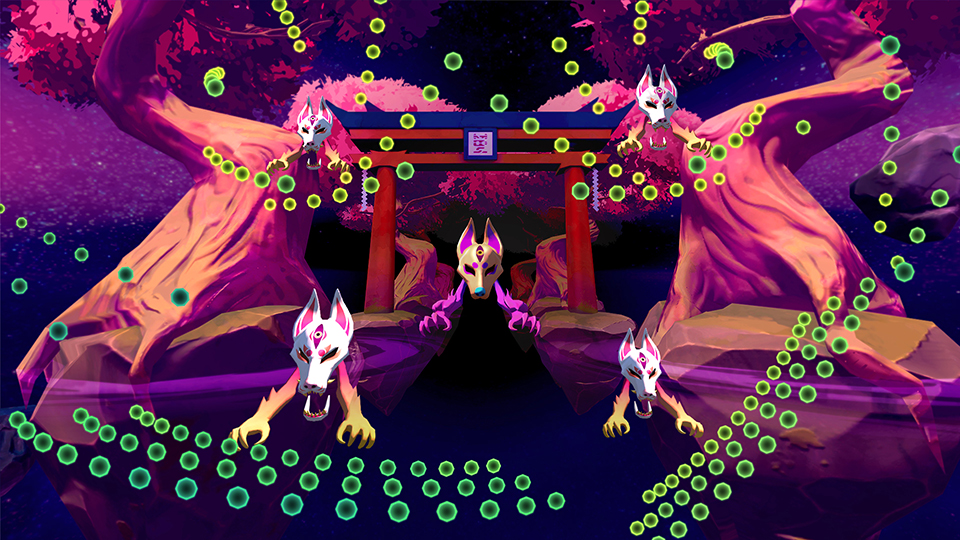 This is just a taste of the chaos that awaits!

YUKI is arguably one the prettiest, sharpest games I ever seen on the Quest.  The opening stage, a bedroom, carries with it a level of charm and detail we rarely see in VR and while you can explain this away as being just a tiny little room, it left an outstanding first impression that carries forward to the actual game.  There are 6 stages to get through and while that may not seem like a lot, it’s plenty as each run is never quite the same.  Each stage has its own theme from a floating city, river, asteroid field and a few others and each is strikingly different from the others including the environmental items that appear and get in your way.   YUKI is a highly detailed child’s action figure brought to life and hearkens back to DOT, AVORE’s other heroine with the enemies you face looking like Kabuki masks, some like people or dragons or cats and come in a few varieties on top of that. As this is a bullet hell shooter, at any point there could be dozens of projectiles flying your way, sometimes to a point where it’s almost all you can see which can be daunting at times as these moments required 100% focus to ensure YUKI doesn’t get hit. The art-style in here is MANGA inspired with a neon/pastel/cell-shaded mix that lends itself great to VR with the geometry items looking surprisingly realistic at times while the NPC’s look much more cartoonish but match wonderfully with the surrounding visuals making for an overall beautiful looking game. 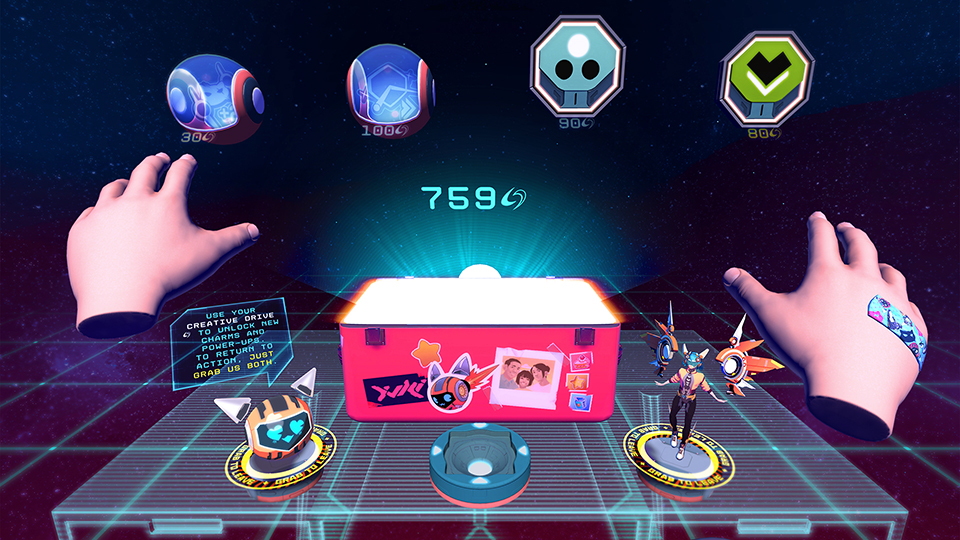 Choose your upgrades and abilities and try, try again

Audio design is also on point with an excellent electronic soundtrack tailored to each stage with some coming in an almost chip tune like form while others offer up much more dramatic and hectic music.  Sound effects are also all on point so every sound you here let’s you know what is happening be it your own & enemy fire, explosions, the sound of the environment and when your shields or freeze ability recharge so you can use them again.  My only complaint would be the lack of personality given to YUKI, who will let out the occasional exclamation or brief sentence during the campaign but does little else and I wish she was fleshed out a bit more, but besides that, there really isn’t anything to complain about as far as presentation goes! 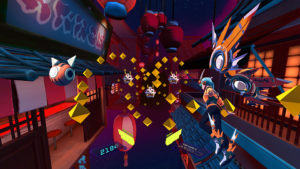 If I were to make a game pitch to describe YUKI, I’d say it’s ‘Until You Fall’ meets ‘Blasters of the Universe’ as it really embraces the Bullet Hell and Rogue-like elements from both those games and combined, make something that feels familiar, yet very fresh.  You could argue that this is an on-the-rails wave shooter but with it being cleverly disguised as a 3rd person shooter, it doesn’t feel like traditional shooters, especially when you are having to navigate YUKI around objects while avoiding gunfire, picking up loot and dishing out the damage.  The rogue-like progression adds the welcome dynamic of having each run never feel quite the same thanks to those pick-ups and power-ups which depending on the run had me armed with several drones assisting me or a dramatically increased fire rate, boosted health, shields and when brought back to the workshop, you can unlock more options and upgrades that could be available on your next run making things just a little easier, but it never gets easy. My only other complaint would be the lack of a narrative as there are some light story elements at play, I played this sitting without much difficulty, but the game is recommended to play standing, which makes sense as some of the more intense moments in the game could benefit from the room-scale that sitting doesn’t provide so when you start to go for those ‘final’ runs, you may want to stand. 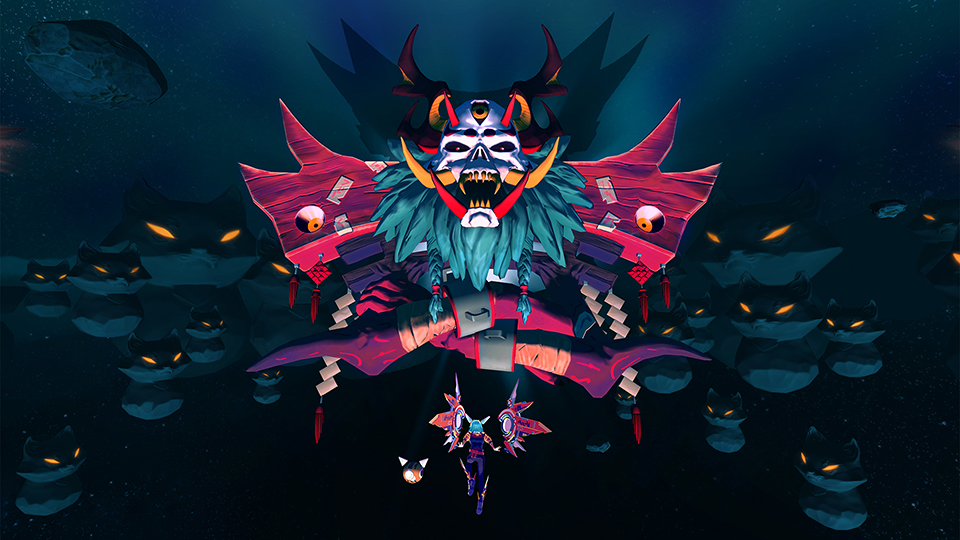 This guy is a dick…I hate this guy!

YUKI is an addicting title that kept calling me back again and again for just one more go and that’s never a bad thing.  Every run provides you with potentially greater advantages and while some runs are more generous than others when it comes to those power-ups, there is a constant feel of progression as the Creative Drive gathered during any run can go towards better unlocks.  If you are looking for a different style of shooter, don’t look past YUKI as it’s a rogue-like unlike any other in VR.

What would I pay? This is $20 US and that’s awesome as I have already spent hours in here and have no intention of stopping until I beat the game.  It’s addicting, challenging, rewarding, looks great and is a showcase title for VR that’s easy to pick up and play, but difficult to master.

ARVORE Interactive Experiences provided The VR Grid with a press code for this title and, regardless of this review, we thank them for that!