Copter and Sky is a VR drone-flying game that knows exactly what it’s trying to be, but fails at every step. This game is the “Big Rigs” of the VR world- an embarrassment to the industry, and a pungent example of the how bad games can be. Whether you’re a drone enthusiast or an average gamer, your jaw will hit the floor when you see the astonishing lack of quality in this title.

In an ugly woodlands environment, you can choose from many challenges to attempt while soaring through the air. While the game is mainly focused on being a drone-centered flight simulator, these modes attempt to attract the average gamer, but fail. Despite boasting 12 challenges, there are really only three, and they’re all awful. None shake up the experience very much, as they only modify small details of the hideous, never-changing map. None of them are even fun, and lasted me around 45 minutes. 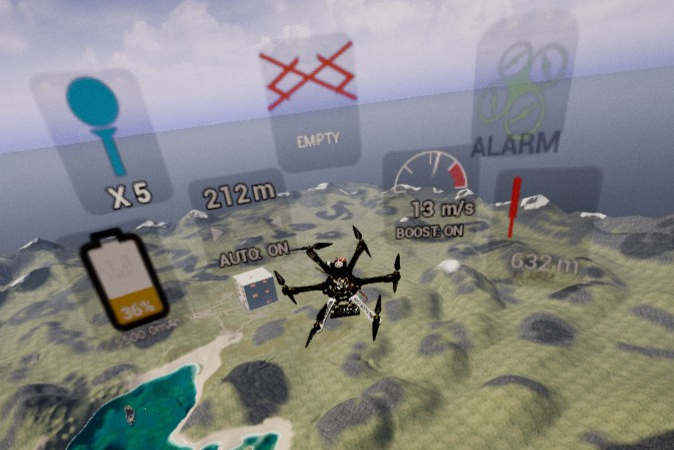 Yes, this is the game’s entire map. No, it doesn’t look much better up close.

Some challenges involve racing through glowing hoops, a generic and unexciting cliche that’s been dreadful ever since its inclusion in Superman 64. Others give you a paintball gun that you shoot targets with, gaining points based on how far you shot from. While I initially enjoyed testing my accuracy, this quickly became repetitive.

Lastly, and most commonly used in the game, you’re sometimes given a tether that can be used to pick things up and bring them to a destination. These include bringing buckets of water to put out fires, delivering packages, and more. Not only is this mind-numbingly boring, but the tether is glitched to the point of barely working.

In my experience, some challenges don’t even work. One insists you “score goals,” but provides you with none. Another requires you “catch fish,” but the game’s lake is totally absent of them. Two challenges involve controlling the drone remotely, from a stationary position, as if it were a real drone. This makes maneuvering almost impossible.

Copter and Sky’s graphics are utterly abysmal, and its VR user interface is even worse. It uses the mouse and keyboard, obscured by your headset, and the controls are overly complicated. It took me 15 minutes just to figure them out. Glitches also plague the UI: If you crash your drone and the menu clips through the ground, for example, the respawn button becomes inaccessible and you’ll have to restart the game.

The heads up display is obnoxious, distracting you with an unnecessary amount of visual information in the center of your vision. Equally obnoxious is the soundtrack, which would be more appropriate at a spring break EDM festival. Copter and Sky receives remarkably frequent “optimization” updates, but none have made it any more bearable over time. 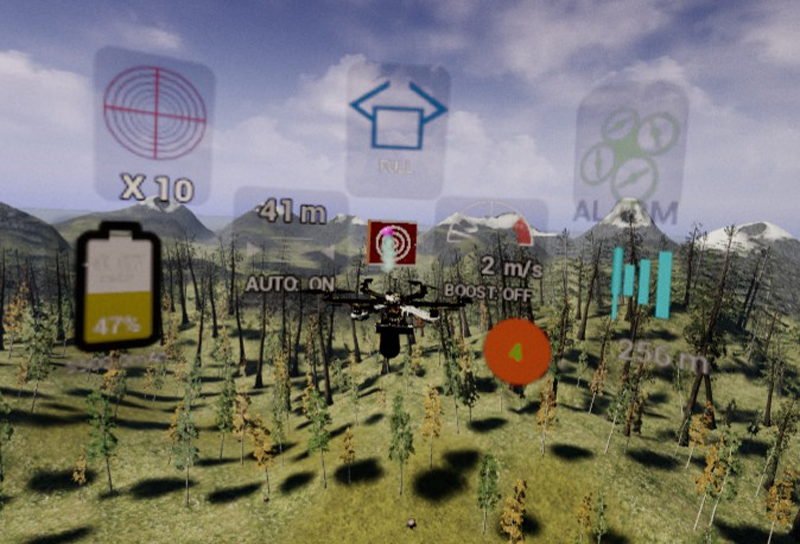 No, this jumbled mess isn’t a menu. This is the heads-up display, circling you at all times.

VR, in general, seems like a poor choice for this game. You can look around using both the mouse and your head, and your rotation is based on both. This requires you stare straight ahead for a tolerable experience. Still, I never had one. I rarely ever get motion sickness, but I almost vomited playing Copter and Sky. The way your visual angle contrasts with the controls made my stomach churn, and I never got used to it. The first-person camera option only worsened this tenfold.

What would I pay for it? This may be one of the worst games I’ve played in my life, with or without VR. I’m almost convinced that Copter and Sky is meant as a practical joke, testing the lower limits of Steam’s quality control. Sadly, it’s not a joke, as evidenced by a $5 asking price. Anything over $1 for this is unacceptable. Don’t even consider buying it.