I have come to the conclusion that of any generation in the history of all that has existed, this current one is the most mentally equipped to battle the impending zombie apocalypse.  You would think that we gamers would be a little sick of dispatching the dead, and some of us definitely are, but by all appearances the genre doesn’t look to be going away anytime soon.  Death Horizon has you infiltrating a laboratory infected by the T12 virus and woops! everyone is now a walking corpse wanting only to consume the flesh of the living. 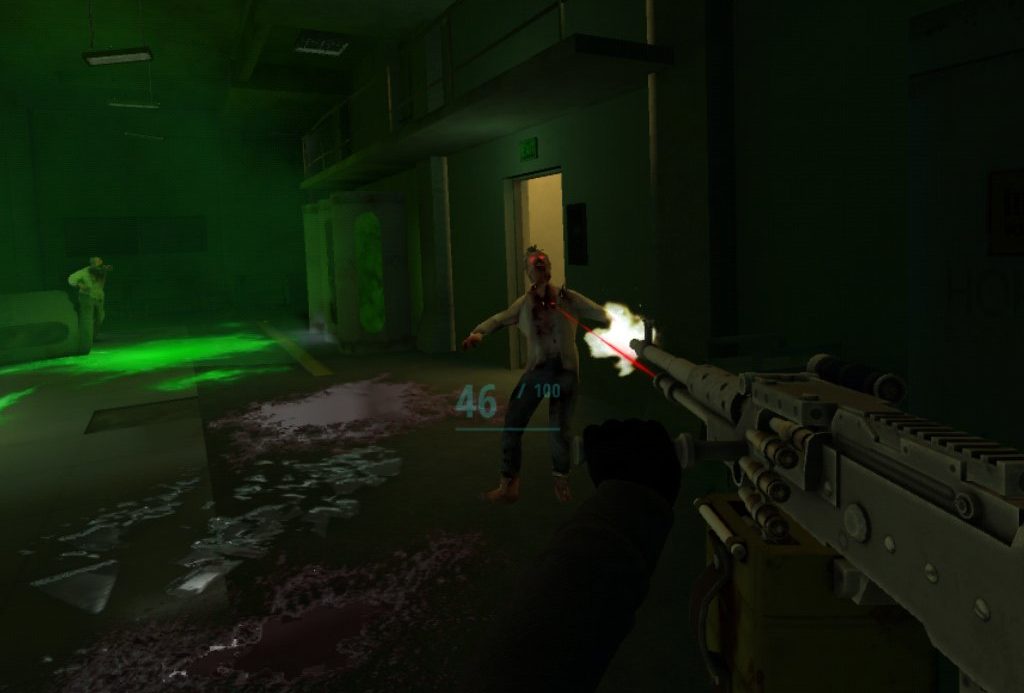 It’s time to get your shoot on!

Armed with an assault rifle, you venture forth into the unknown to figure out how to stop this menace before it spreads beyond the walls of the lab.  Controls are simple enough; using just the headset, simply tap on the touch pad to fire and look in the direction you want to shoot and swiping down to reload. The touch controller offers a little more freedom of movement with the trigger used to fire and swiping down on the touch pad to reload.  I preferred the headset controls over the controller for a few reasons.  The first being that I was just able to shoot faster with my finger in that position, the second being that when reloading, occasionally the controller would not read the swipe motion, often causing my death.  Movement is on the rails and navigated by way-points so once you move to the next area, you clear out that wave, than proceed to the next.  It’s fluid and works really well though I did have issues with head shots seemingly being ineffective or taking way to many shots.  Instead I just opted for tapping my gun as fast as I could and shooting at their zombie bodies.

The game looks really good for a Gear VR game, but don’t be fooled by the trailer or the “screenshots” on the Oculus page, it doesn’t look nearly that good and those pics and vid should seriously be removed or edited to reflect the actual games’ visuals.  That said,  the zombies carry a fair bit of detail and come in a variety of models so while you will see the same type on many occasions, the difference between them all makes for some immersive action.  Stages carry with them a nice level of detail as well.  I found some the zombie animations to be a bit too jerky, making for some odd looking motions, but for the most part everything here looked really good. 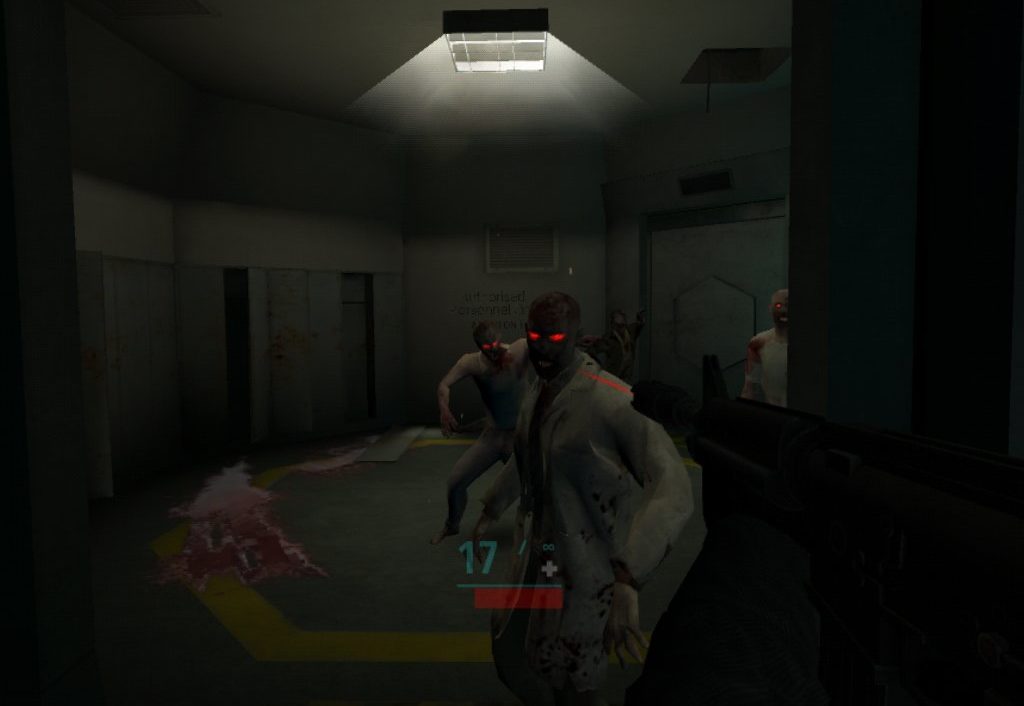 Around every single corner is potential death…be ready!

Gun blasts, explosions and, of course, zombie noises all sound as they should.  Headphones are recommended as the only clue to zombie sneaking up from behind may just be the gutteral groan of that baddie.  You are in contact with the outside and it’s these brief conversations that you are given your orders to proceed.  Shattering glass or loud barking demand immediate attention lest you be overrun by some quick moving enemies.

It’s a linear game with only 1 path to choose, minus one tiny branching section toward the end that leads to the same spot, so kill and advance are major gameplay elements.  Throughout each level are hidden weapons, a shot gun or machine gun, and can be a huge aid when enemies number get a bit high.  I actually found the shotgun to be more of annoyance as the reload time was way to high and the damage dealt seemed to low and I ended up just not picking it up, preferring my stock rifle. The machine gun on the other hand offers 100 rounds of awesome and obliterates all that lies before you with ease and saved my ass on more than one occasion. The only downside with these is that they do have limited ammo and once you expend them, they’re gone until you find another. 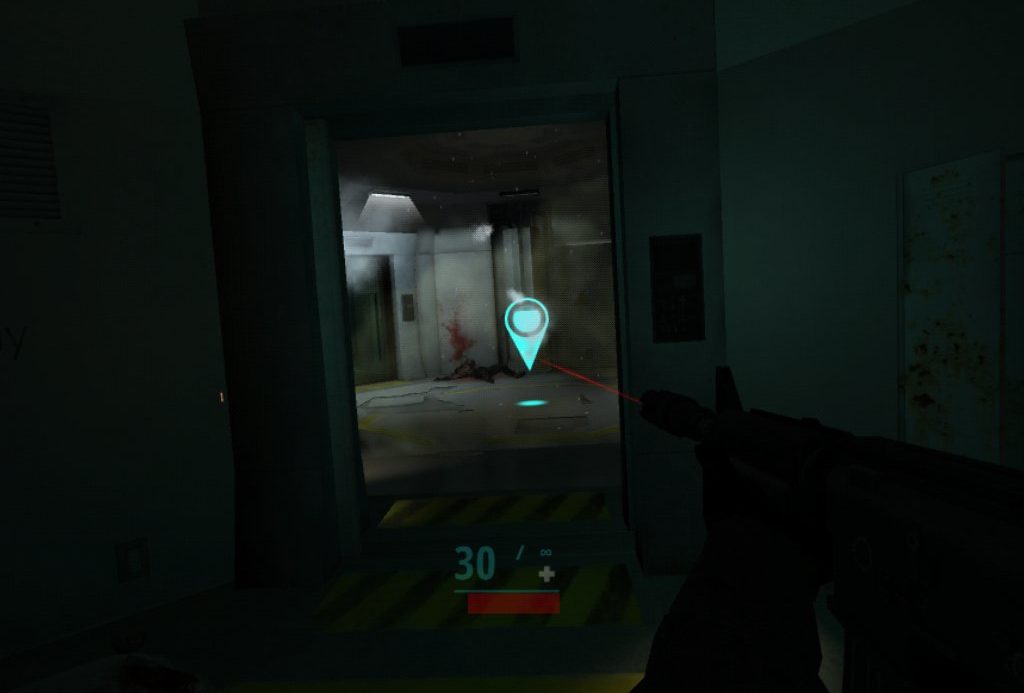 look at the way point…move to the waypoint

The action takes place all around you thanks to the wireless freedom offered by the Gear, and given the amount of enemies that could come at you, I’d recommend standing for this one.  The campaign is broken up by check points and 3 stages and dying simply has you restarting at the last checkpoint.  Health replenishes over time so you can take a hit or 2 without worry but not much more than it.  The campaign itself can be beaten in roughly an hour, which may seem a little light, but given the repetitive nature of the game, I was actually satisfied with the length. 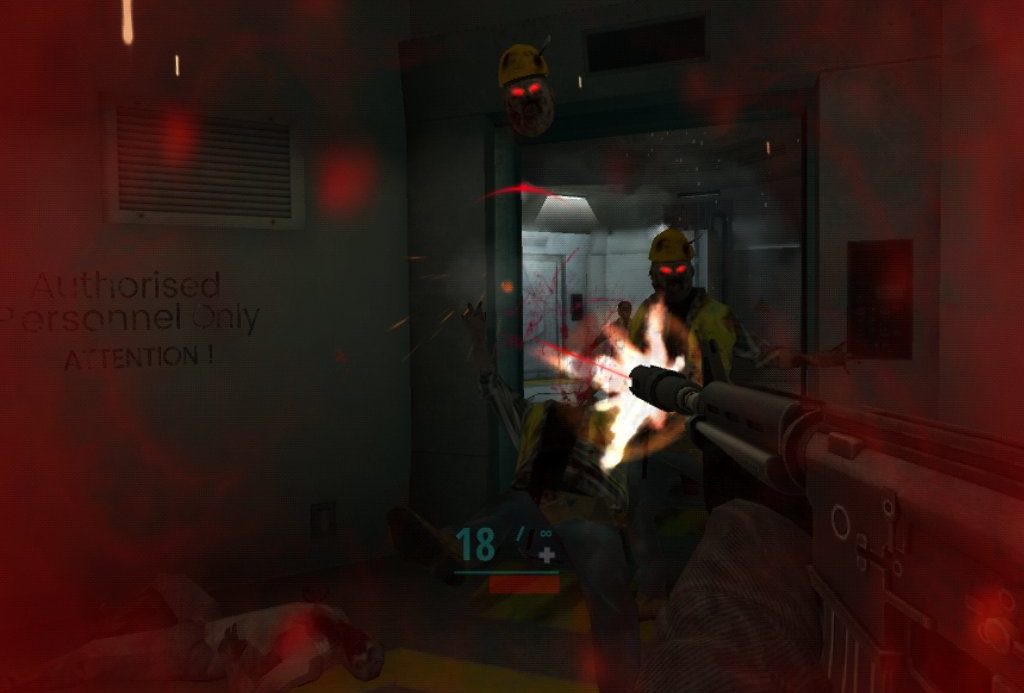 I think that counts as a headshot!

Overall, I thought this was a pretty solid experience.  It’s not perfect by any stretch, but with good looking visuals and reliable mechanics, I had fun throughout my entire my play-through.  It’s not this most complex FPS, but it doesn’t have to be.  If your looking to kill some zombies in VR, than I’d recommend picking this one up.

What would I pay?  $4.99 might seem a little high to some, but given the higher level of detail and fun gameplay, I’d happily pay that price!

Dream Dev Studio LLP provided theVRgrid.com with a review code for this game and, regardless of this review, we thank them for that.