This is Iron Man VR, a full blown AAA-quality Iron Man game that actually puts you in the suit and lets you experience the rush of actually flying through wide open levels blasting anything in your way. This game was a bucket list moment for me when it first launched on PSVR a few years ago, so I was very curious if the Quest 2 could deliver the same epic experience.

Storywise, developer Camouflaj has delivered a standalone Iron Man narrative that seems to take place somewhere between the first and second film. Tony has made his relationship with Pepper a commitment and in doing so has agreed to cease the production of weapons by Stark Industries and focus entirely on the Iron Man Suit program. Unfortunately, his past catches up with him, and threatens everything he now holds dear. It’s the perfect backdrop to give you an excuse to be Iron Man, and the story has enough twists and turns to remain semi-interesting throughout. 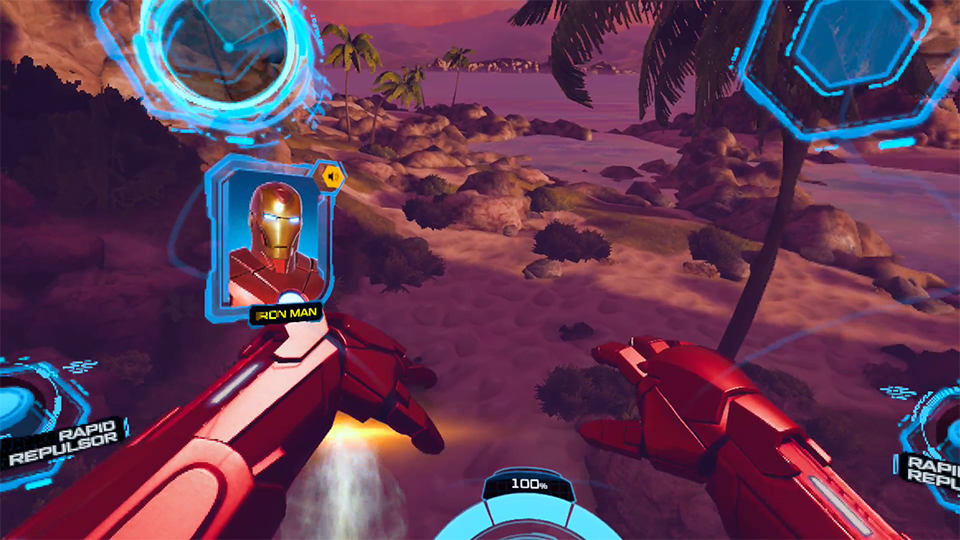 Flying with your hand jets is a blast!

As an 80’s kid, I, like many, was obsessed with comic books, video games, and sci-fi fantasy movies. My answer to the age-old question of what superpower would you have if you could only have one, was unequivocally to fly. So, you can imagine my initial reaction when hitting the boosters for the first time. Camouflaj spent nearly three years working on the flight systems in this game and it shows. With a combination of head movement and hand positioning, the sense of control in the air is equal parts intuitive and mesmerizing. If you have ever watched an Iron Man movie, then you know how to fly in this.

While click and smooth turning along with seated play are both offered as options, this is a game that really should be played standing in order to get the full impact and sense of freedom. The latter of which makes Iron Man VR’s arrival on the Standalone Quest 2 such a welcomed arrival, as despite how fun Iron Man VR was on the PSVR, the tethered cable and lack of 360 degree tracking of the PSVR headset kept players on a leash. Gameplay wise, everything from the PSVR version remains on the Quest 2 version, but players now have complete freedom to move like they really are in the suit: spinning around to shoot enemies completely uninhibited. I loved playing this game on the PSVR, but this is the way Iron Man VR was meant to be played.

There are turning options for those looking to move less or who would prefer seated play, as well as comfort options for those who need it. Iron Man VR goes out of its way to make sure it’s a comfortable experience for a wide range of players. I was very grateful that it also allowed VR veterans and flyboys alike to take off the training wheels and let it rip. Thankfully, Iron Man doesn’t shy away from speed and instead actually doubles down on it – not only offering the ability to boost faster, but also allowing players to upgrade it even further. Unfortunately, while the sense of speed is there, the sense of height is often not. This is likely due to the less aggressive stereoscopic 3D sense of depth to keep the performance in check. This issue is further dampened by an inherent issue to flying games in general as they often simply lack much in the way of objects around you to help give the player a sense of depth, scale and often speed. Case in point, Ace Combat 7 avoided much of this by giving us interactive Cloud cover that we could get above and below, offering that sense of real world scale. Iron Man VR does little of this in the vertical sense and instead goes for a more arcade approach to world scale (and much of its gameplay). 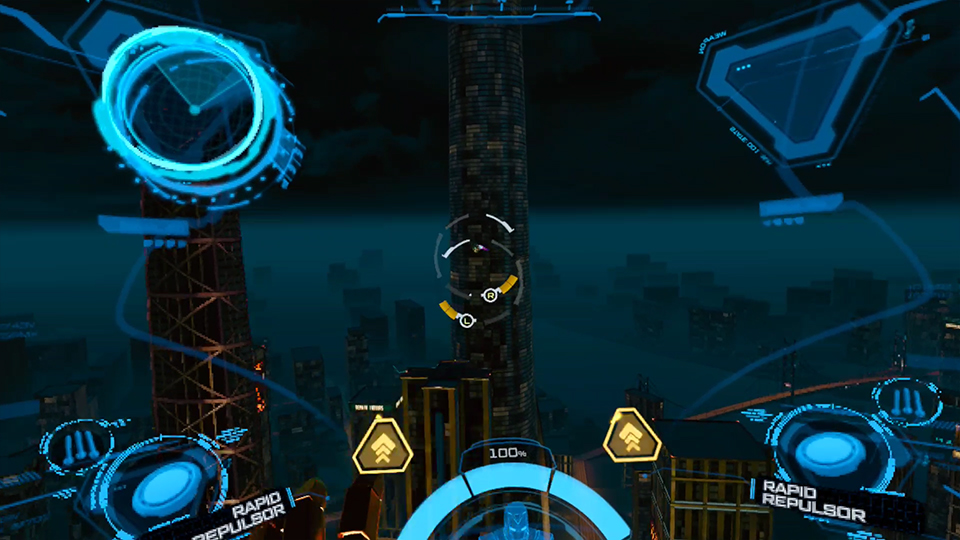 You’ll visit a few locales…most of them twice or more.

Regarding gameplay, Iron Man VR is neither an on-rail shallow cash grab, nor is it a full blown VR title with a deep upgrading gameplay system. What we do get is maybe the best arcade game ever made, offering its thrills in 30 minute action doses. As for the action itself, it is simple shooter fun that is greatly elevated by its flight system and the inherent thrill of being inside an Iron Man suit.

As Iron Man, your controls and general loadout consist of flight boosters controlled by the trigger buttons. Basic blasters are handled independently by facing your palms in the target and pushing the face buttons on either controller. Turning controls outside of real world movement are handled by the analog sticks, and finally, a rapid speed boost is handled by simply double tapping either trigger and activating that hand’s respective booster. The armament of your suit starts off simple, however the game quickly ramps up its load out options, offering a decent selection of weapons, shield and boost upgrades. Keeping with the arcade approach, all of these are unlocked at the beginning and simply require crafting points that you earn by playing either missions or challenges. 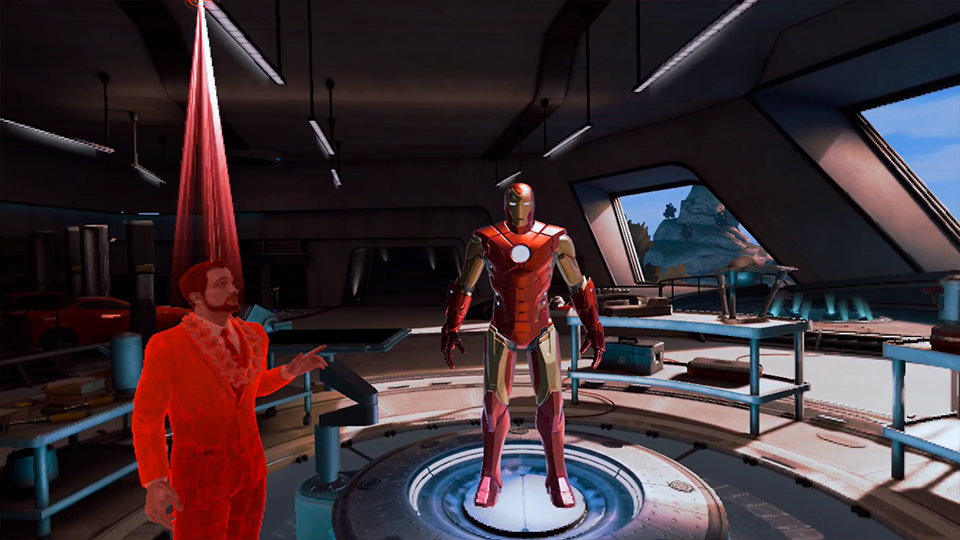 Here you can customize Iron Man’s appearance and loadout.

While the immediate gratification approach to the upgrade system negates much of the game’s progression, it does have the likely desired effect of offering players the thrill of playing the way they want to almost immediately. Additional weapon add-ons are primarily added to each of your forearms and activated by dropping your wrist and clicking the fire button. Now, I will say most of these weapons often felt a bit “same-y” and rarely did much higher levels of damage, but they do allow the player to customize to their play style. While the game lacks much in the way of progression, there can be a real depth found in its flight and fight mechanics for those who want to invest. Iron Man VR is wholeheartedly an arcade injection of fun, but mastering the controls actually takes practice; after eight hours in-game, I still suck, but I found myself getting smoother, quicker, and more multifaceted in my approach to combat over time, often chaining together ranged, melee and advance flight techniques all at once.

Graphics-wise, Iron Man VR is a wonder on the Quest 2, and I often found myself wondering just how Camouflaj actually pulled this off on a standalone headset. Now for those wanting a deep dive on the differences between the PSVR and Quest 2 version, check out our side-by-side comparison video that Ryan put together. Generally speaking, however, the Quest 2 version of Iron Man VR looks fantastic and feels just as fast and large as it did on the PSVR with only a bit of a drop in texture detail and lighting effects. Again, I’m really not sure how Camouflaj managed to pull this off, as the Quest 2 version even manages to keep much of the draw distance of the PSVR version, while still taking advantage of the Quest 2’s higher resolution display. Like just about any flight game that has ever been made, it looks better up in the air. 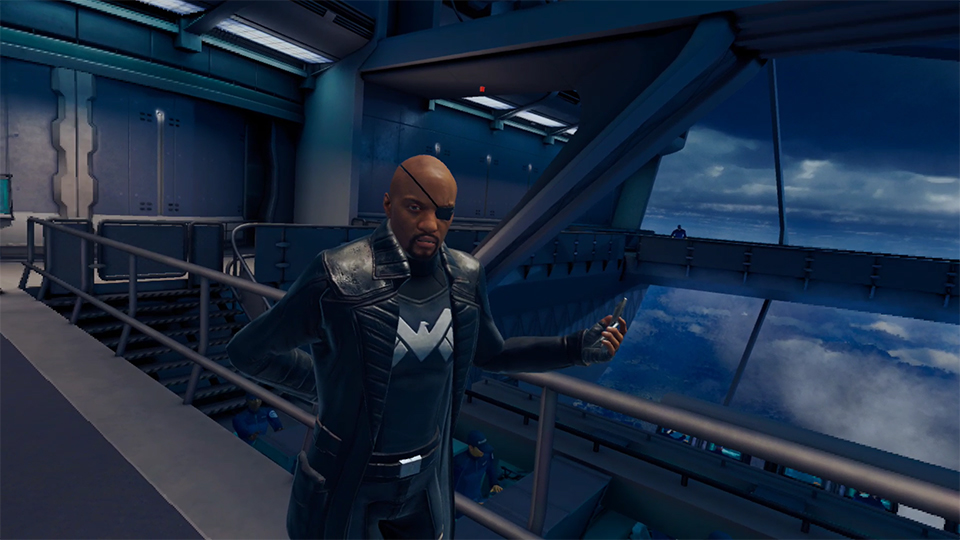 You may see a familiar face or 2 pop up throughout the campaign.

Iron Man VR is visually at its best when up in the open air flying around. Its moderately spacious set pieces up in the sky, Iron Man VR at first comes off every bit the part of a big budget VR. However, with further time flying around in the game’s handful of stages, and it’s hard not to notice the compromises Camouflaj had to make to bring this flight fantasy to VR. Bigger and visually more impressive stages like the opening plane sequence and the shield heli-carrier stages look good at first but quickly show themselves to be almost matte painting backdrops in which you will never reach or land in. These spacious set pieces work just fine given the style of the arcade combat at hand, but it is slightly immersion breaking and tends to highlight the game’s already flat feeling. It is in other stages, like the night-soaked Shanghai set piece, where Iron Man actively shows off its limitations by making the mistake of letting us hit the street. Like a good magician, you never let your audience see behind the curtain. Unfortunately, Iron Man VR at times certainly does just that with some extremely low level textures showing up. With really only five set pieces recycled through the game’s 12 stages, level-fatigue does set in. If frequently revisiting the game, this same level of fatigue is echoed by the lack of enemy variation. Criticisms aside though, when taken as a whole package, Iron Man is still visually impressive and remains a visual marvel on the Quest 2.

Iron Man VR is a Marvel-licensed game, which pretty much guaranteed that the sound design was going to be first rate. Sound effects sound like they were ripped right from the movies and immediately give the game a sense of authenticity, helping to ground it in the Marvel universe. Also, like the movies, the action here is loud and furious with explosions and laser blasts filling the sound mix. The cinematic flare is greatly doubled down on with the inclusion of the appropriately epic orchestral score that is bombastic at times and equal parts subdued where appropriate. You won’t find any memorable music themes here, but the soundtrack wonderfully elevates the game to theatrical film levels. Voice acting was not provided by the film cast but was still well delivered overall, if occasionally a little over the top. Sometimes Iron Man VR comes off more like a Saturday morning cartoon than the theatrical movies. The writing quality reinforces a script that has the flavor of the characters we know, but with a noticeably different style and tone. The result is a Tony Stark that almost sounds like Robert Downey Jr at times….but just doesn’t quite stick the landing. Regardless, the sound design here is top notch. 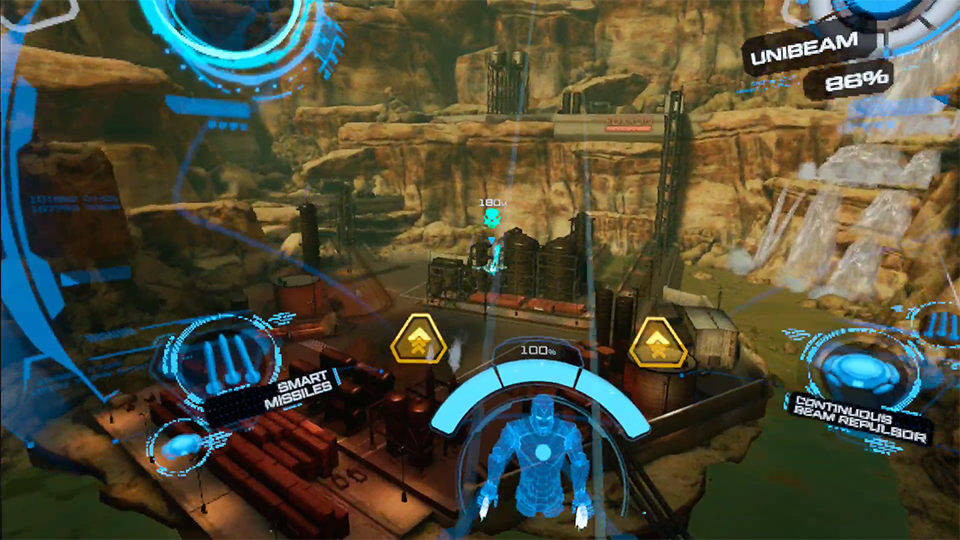 Chasing villains through a canyon is always a blast!

And that brings me to my final thoughts and review score. Iron Man VR is not the deep experience some had hoped for, nor is it a cheap licensed cash grab. Iron Man’s 12 stages can feel a bit samey, made even more monotonous by frequent repeats of the same five or six set pieces. However, it is a game that works much better when taken in short doses where the flight and combat can be an absolute blast.

This really comes down to what you want out of this game. If like me, you wanna feel the rush and freedom of looking up in the sky and moments later being there, there’s simply nothing better for this than Iron Man VR. However, for some this rush might fade quickly and outside of the arcade combat, there just isn’t much here to chew on. As such, I would recommend you decide how much the rush being Iron Man is worth to you.

Comouflaj provided The VR GRid with a press code for this title and, regardless of this review, we thank them for that!