ARK Park is an odd blend of light-education and wave shooter all centered around our Jurassic ancestors, the dinosaurs.   Clearly inspired by the Jurassic Park franchise, ARK Park takes us to a future where Dinosaurs live in a sort-of sanctuary where we can view how they interact is some very contained stages.  There are a few more elements to the game that I will cover below, but ARK Park more than anything else suffers from an identity crisis and lack of innovations…oh and the price is nuts for this. 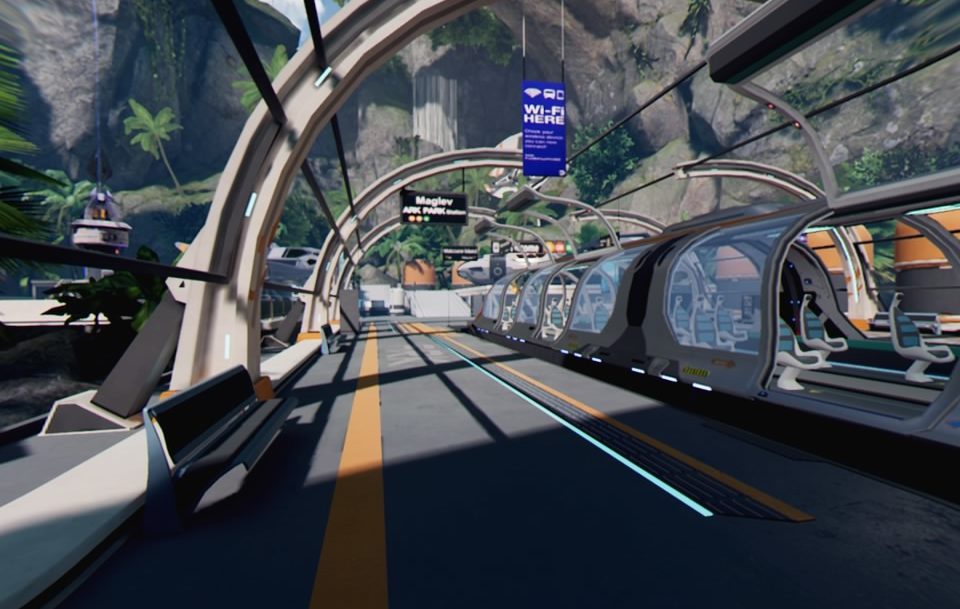 The opening setting and train had ride had me optimistic for what I was about to experience!

With Moves or DS4 being used you can navigate around small areas on the island by teleportation and click-turning only. Not game breaking, but  what’s worse is that with either control method you can select which way you want to face when you move to the next spot which often times had me facing in seemingly random directions as the arrow that designated which way I was looking was so sensitive to the controller that any movement from the controller would change the way I faced.   You get a back pack which is nothing more than some slots that pop up and you can place items in and a few tools to help in your exploration of ARK Park.  Unlike EVERY OTHER teleportation based PSVR game using Move controllers, Snail Games has seen fit to use your headset to look at the ground and buttons on the move controllers to activate and move.  It’s a movement system that, even after hours of play, is cumbersome and annoying.

The tutorial is a must as it teaches you all the basics from navigation, incubating dinosaur eggs that you may find, crafting, resource gathering and gun play.  After leaving the train station, which is complete waste of game resources as there is no need to ever come back after the opening moments, you take a cool little train ride to dino-island.  On this ride you’ll see a few dinosaurs in the water and get a nice look at your future surroundings.  Once you get to the lobby, you can explore and see different holographic versions of the most popular dinosaurs and interact with them in some fun dino-loving ways.  I fed a hadrosaur, had a T-Rex yell in my face and marvelled at the size of some of these beasts.  Once again though, once you have seen all there is to see in this area, the only reason to come back would be to see it all again. 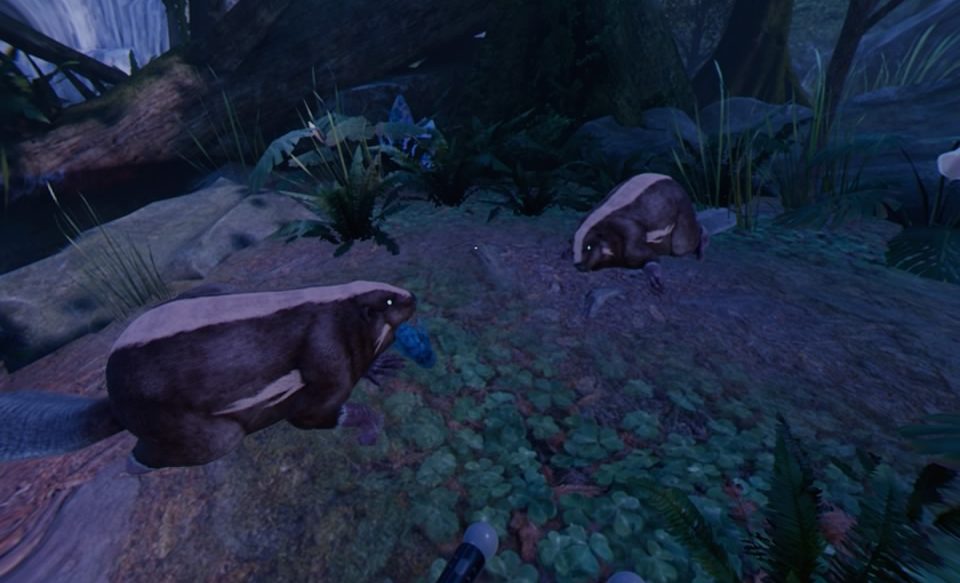 The 1st time you experience any of these scenes is fun…the 10th time torture.

Moving on, you’ll come across an area where you can raise infant dinosaurs, which basically just has them grow from babies to adults in a few minutes or a few hours and ride them along a pre-set path.   That path never changes so no matter what dinosaur you unlock, you instantly strap a saddle on them and enjoy a slightly different view of the same scene again and again and again.  You can craft weapons which requires you to visit 1 of 5 areas and chop down trees for wood, or harvest plants so get the proper material needed for the 3D printer that will give you weapons.  Weapons are obviously used during the dino-murder portion of the game and come with unlimited ammo, though you’ll have to reload when your out.

Those 5 areas are the bulk of the game and suffer from a few issues.  Each of the 5 stages requires a certain number of animals to be scanned and you add their DNA matrix to your index…or something.   These stages play out more like lightly interactive cinematics where a Beaver may go and catch a fish, or a T-Rex will chase some smaller dinosaurs and run off.  That dynamic means that if you miss a creature, and you will, you’ll have to leave and return to see the same actions unfold, so what may impress the 1st time, quickly becomes a chore after only a few more playthroughs.  Add in the constant need to harvest items as even the weapons you make degrade over time forcing you to constantly head to back some tiny portion of the island and chop down a tree…for the 6th time. 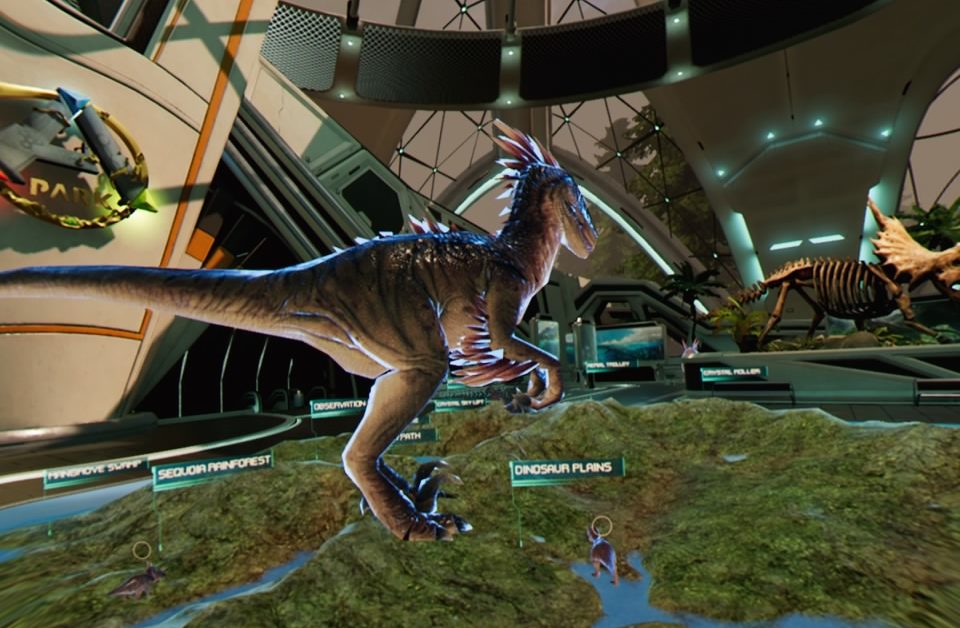 So, with all this work getting weapons and being based on a somewhat popular shooter, you would think the gunplay would be a solid addition.  Alas, this is not the case in ARK park and what we get here is a very basic wave shooter that has you disposing wave after wave of dinosaurs as you defend a busted mind control device that they intend to destroy.  Ammo is infinite, and guns can be loaded with a light shake.  On the off chance the dinosaurs kill you, you must wait for a 10 second timer to count down until you can shoot again, which may as well be a death sentence as that gives the dinosaurs more than enough time to destroy their target.  You can teleport move in these areas, but the issues with the direction you may face after moving make this a very risky option when the dino’s appear

On the multiplayer side it looks like you can play through all the games content; exploration and battles, with up to 4 other people but I honestly can’t tell you how that plays or if that’s even true as I can’t find anyone playing online.  That said, outside of the battles I have no desire to play through the exploration stages any more, with or without a friend.

While there are some cool moments, this is mostly due to the scale of the dinosaurs and the action unfolding.  The opening areas are very blurry looking and that carries on throughout the game, seemingly at random.  The dinosaurs and foliage are typically clear, but than objects very far away look noticeably out of focus.  Dinosaurs slide all over the place as the move about which is really odd when you consider that many of the events are scripted.  You can view and interact with dinosaurs in that museum hub, but they all carry a holographic sheen which ruins the feeling of interacting with ‘real’ beasts.  ARK Park doesn’t look bad by any stretch, but every time I saw a stiff animation or a creature that clearly wasn’t given as much TLC as the other, I cringed a little. 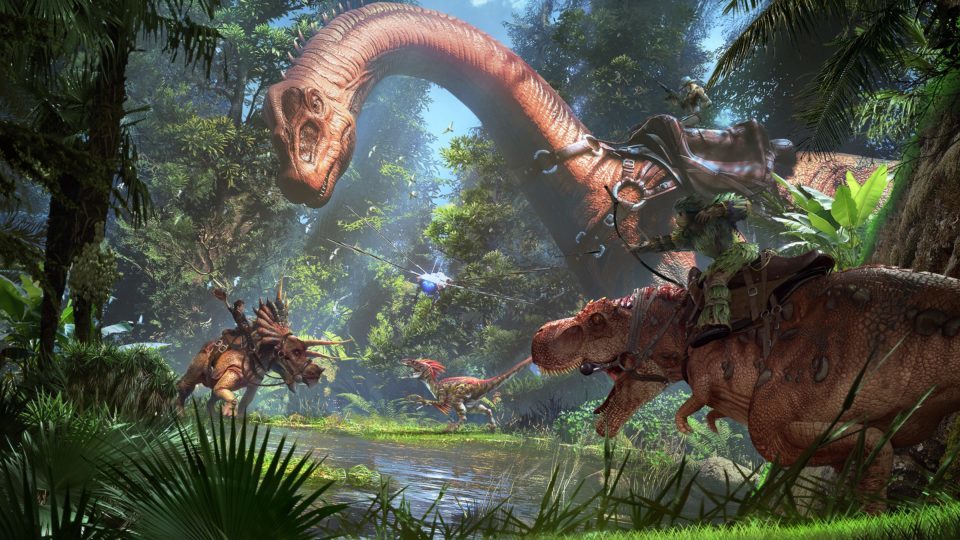 Every loading screen is a blatant lie about the content actually available. Nothing in this screen represents the actual gameplay.

The music clearly takes inspiration from the Jurassic Park soundtrack and borders on being a blatant rip-off of the main theme and kind of feels like a cheap way at immersing you in a world you think you’ve been in before.  Sound effects are actually really good with all the creatures having their unique sounds and the ambient noise makes each setting feel alive.  Your tutorial host, a robot dragonfly, is a little annoying, but you only have to put up with her for 30 minutes or so

Besides the gameplay, movement and visual issues, there are still some more choices made in ARK Park that feel off.  All those opening moments of how amazing these creatures are is almost immediately undone by your first action with a real dinosaur, which is to put a saddle on it and ride it, your next interaction is to shoot at a bunch of dinosaurs that are no longer under control of the machines that make them docile.  It’s just a choice that feels odd and the shooting aspects in this game feel completely tacked on, especially considering their lack of refinement.  You need to look at everything to activate it making the in-game representations of the moves next to useless unless you need to shoot or harvest something.  The crafting of items is a process that is just to complicated for no better reason than to extend gameplay which really ends up being the theme for the whole game. 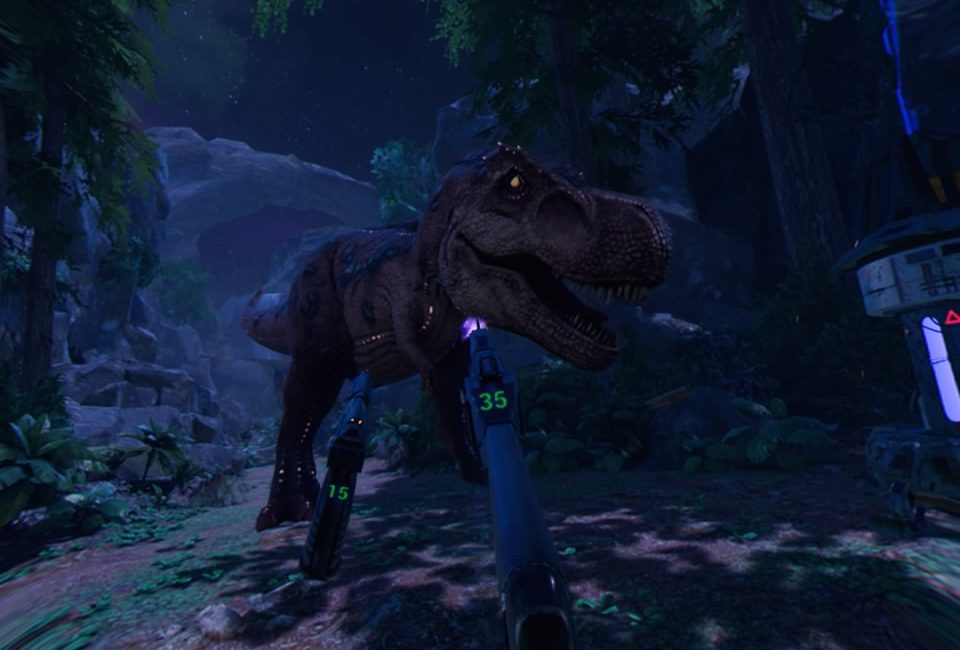 ARK Park is clearly aimed at a younger audience and maybe for those looking to fulfill 1 or 2 childhood fantasies.  While there are few initial ‘wow’ moments at the games onset, after those first 30 minutes though, the flaws become very apparent and the gameplay becomes a chore.  The gunplay is so basic as to offer nothing but the shallowest of shooter experiences and while the multiplayer might add a tiny bit more fun to this, good luck finding anyone to play this with.

What would I pay?  The $50 US asking price for this is a joke.  ARK Park takes the educational component from Time Machine and strips that bare, emulates the shallow gun play in Jurassic Survival from the Herocade collection and adds on a completely unnecessary crafting mechanic just to extend gameplay.   $15 US is the most I would pay this…sadly, I paid a lot more to review it.