I have a sneaking suspicion that no matter what I say here almost all of you readers already know whether you would even consider purchasing a VR chess game, and for those that decide against this purchase, you have chosen poorly.  I am not a giant fan of chess, the last time I played would have been on my blackberry some years ago against AI opponents.  This game has renewed my like for chess and established itself as one of the best video game adaptations of one of the oldest games still played worldwide today. 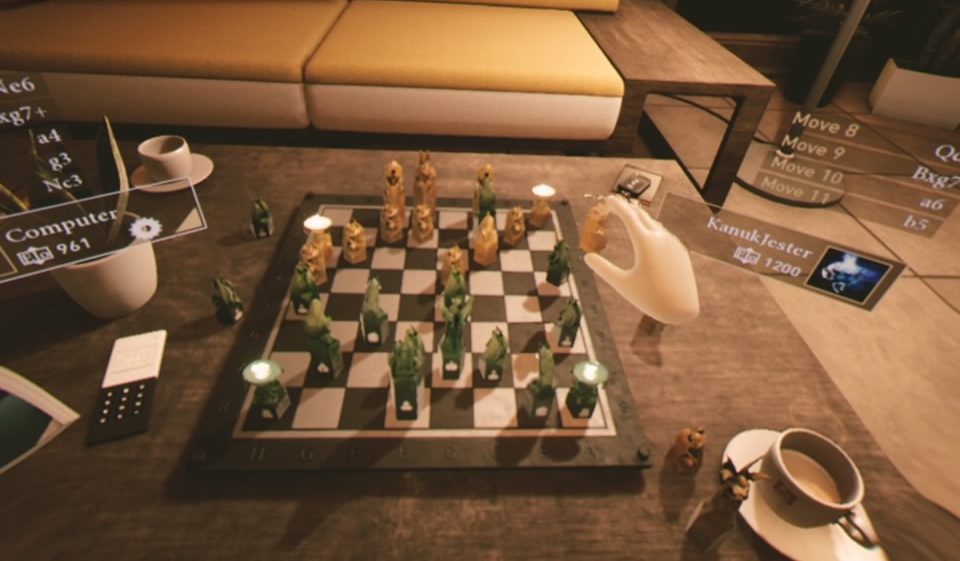 Sit down in front a coffee table for a nice game of chess.

This game can be played in both VR and not, but VR is by far the way to play this   Controls are simple enough.  Move controllers give you a left and right hands with which to grab and move the pieces as you see fit.  Board highlights aid in your placement of the pieces though I found the tracking to be pretty spot on.  You can play with DS4 controllers as well which just involves moving a cursor around the board, selecting a piece and highlighting where you want to move that piece.  Move controllers are the way to go.  Everything works flawlessly, except for one issue which I’m sure will be patched quickly; the difficulty option before a game starts requires a DS4 to select, forcing you to have the controller nearby at the start of every game.

The content here is what makes this so great.  You can select from a few different levels (more on that later) and play a quick round against an AI opponent.  A large amount of Grandmaster approved difficulty levels are here to cater to newbies and masters alike.  The online opportunity for a quick match is here with options to adjust just about everything the rules of chess allow you from move timers and game length to more superficial options like piece design and material.  From there you play until someone wins…pretty simple.  You can also start/join or just watch a tournament just to see who’s the best online or just or challenge multiple AI opponents in a row.  Each game is stored in 1 of 6 slots for you to go back and play/view at your leisure, including multiplayer matches.  And all of this is added to your overall leaderboard score so you can see just how you stack up against your fellow players. 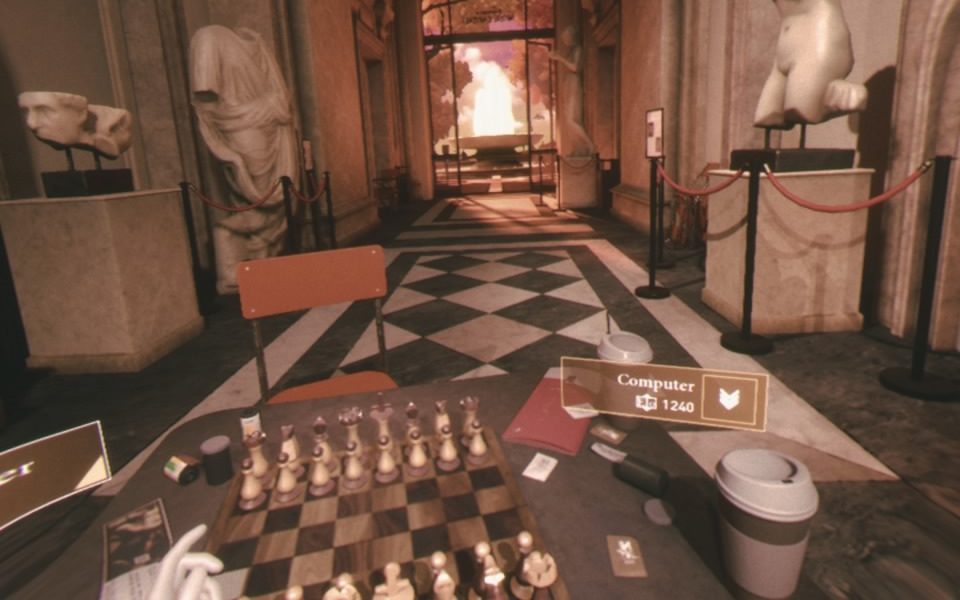 The ambience in this level is great!

The tutorials are broken up into individual piece lessons for new players and continue into some complex strategies for veterans of the game.  Anyone looking to improve their game should not ignore this section, it’s a trove of knowledge.  The other mode available offers up some single player challenges consisting of simple tasks like getting checkpoint in a few moves on an established game or joining in on a famous game from the past and try to emulate the last few moves from that game. There are over 80 of these challenges available so there is a fair bit of content to wade through should you decide to tackle it.  Even within each game is the option to rewind to previous move and continue from that point, allowing you to learn and adjust your game on the spot or undo a critical error and push on.  It’s also worth mentioning that this supports cross platform play so finding matchups should be easier than being exclusively locked to the PSN network.

The main draw to the visuals is the setting and environment around you.  Choose from 4 fully realized levels; an artsy house with skyline view, and quaint living room, an artistic hallway, and Gammorah where you face off against the spectre of Death.  You read that correct.  While the 1st 3 levels have you facing off against bodiless opponents, the last has you opposite the Grim Reaper and that suddenly adds an intensity to the game.  He clatters his bony figures on the table while waiting for his turn and groans and gets a little edgy when you get closer to victory…I love it!  I feel like there is a missed opportunity to not have avatars to choose from and play against in single or multiplayer, but what’s here is still phenomenal.  The levels all carry a tonne of detail, with some more subtle moments like ringing cell phones and flowing fountains adding the ambience/realism.  The amount of care behind the visuals shows and the devs here went way beyond what was needed for a competent chess game. 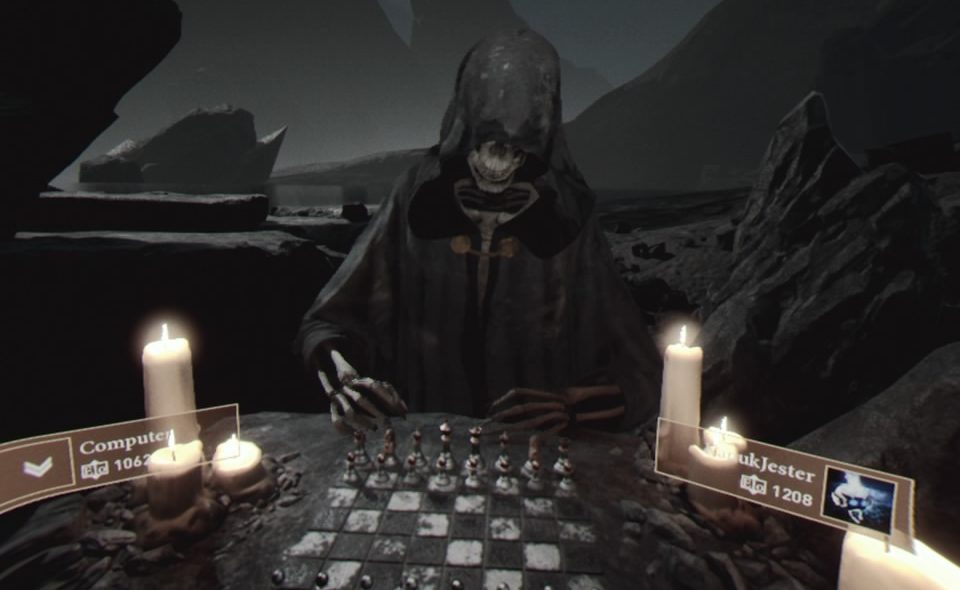 I could play chess in this mode all day, it’s so intense!!!

Ava Maria and a host of other melodic songs accompany your play and fit the mood perfectly.  It’s chess so there isn’t a tonne of effects, but the environment feel alive with background noises accompanying every game you play. It’s all great!

Besides the difficulty setting issue, I also experienced on more than once occasion the inability to quit the game or do anything else as the replay menu popped up and wouldn’t go away, forcing a restart of the game.  I was kicked from single play games back to the main menu for no reason a few times as well, but hopefully these minor issues will be remedied at or soon after launch.  It’s also worth mentioning that the local multiplayer only supports 1 controller(you share!) with the TV and VR user sharing the same view of the board which just feels like a big misstep to me.  Move support is removed in this mode as well so if you want to play locally it’s almost best to remove the headset as swapping 1 controller with 1 player wearing a headset is a pain.  An update is needed to at least support 2 controllers and at best add a view for each players side of the board when viewing on both TV and in VR.

As I said at the beginning, you probably know whether you would you buy this and I hope for those on the fence that this review pushes you toward the purchase.  It’s a phenomenal package built for newbies and masters alike and caters to both classic players of the game and those looking to add a bit of ‘edge’ to their chess experience.  Plus, it’s just fun to tickle your brain in new ways and chess will definitely make you think!

What would I pay? Honestly, I wouldn’t feel ripped off if this was $20.  There is way more here than I would have expected from a $12 game.  If you want to learn to play chess, this is great.  If you want to hone your skills, this will do that too.  The visual flare and overall polish just make this a joy to play.

Ripstone provided theVRgrid with a copy of this game and, regardless of our review, we thank them for that!