In space, no one can hear you scream…especially as you collide into an asteroid after screwing up a poorly timed jump.  Detached is a simulation game that couldn’t be done outside of VR and still retain its absolute awesomeness.  For those looking for a main stream comparison to what detached brings to the table, this plays like a VR representation of the movie Gravity, only in this one, George Clooney is no help.  Quick plot, you are coming back from a mission when you are attacked and it’s up to you to float to a bunch of buildings built into asteroids to restore some systems so you can get the hell out of there before more bad guys show up. 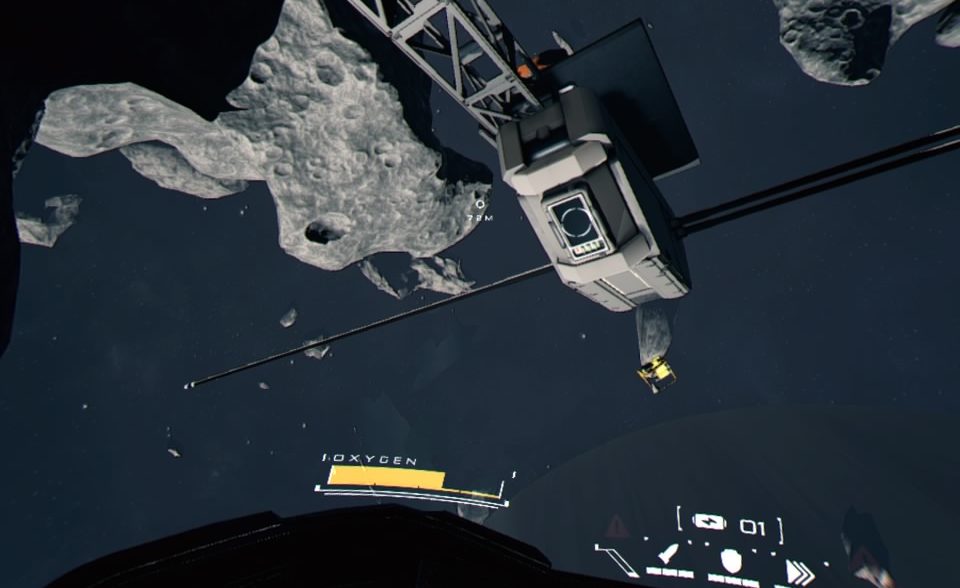 Look at me…I’m a space man!

Drifting through space has never been done quite as well is it is here…provided you are in simulation mode.  It’s DS4 only, which is a bit unfortunate as I would love to be able to grab stuff as I float by, but it still is a blast.  With 3 comfort options to choose from; Arcade, Astronaut or Simulation, the options are there for those of any constitution with Arcade being the “easiest” of the bunch.  No matter which method you play, the base controls are the same with you controlling jets on your space suit to propel yourself to wherever you want to go.  The Single player game requires you to activate computer panels and collect fuel and oxygen, though this doesn’t involve anything more then pressing ‘X’ with the bulk of the gameplay just requiring you to drift through space.  Certain missions may require you to do something in a specific time and a missile unlock early in the game allows you to disrupt electronics allowing you to bypass some barriers and navigate some intense objectives.  The campaign takes place mainly in 2 large areas as you float from station to station to activate resources necessary for your escape.

Detached looks pretty damned good in my opinion, even with the more realistic visuals.  Typical of more realistic looking graphics, distant visuals take the biggest hit, but even then, look really good.  Large objects on a space background are rendered wonderfully and whether it be the asteroid field or the second stages ship debris, it all looks solid.  Lighting effect are also on point, especially when you’re drifting in space, and the light from a star hits your face, it’s blindingly beautiful. 1 small mission taking place inside a hanger with some floating debris had some really weird shadow effect popping in, but it seemed only occur in that stage.  Coming in close on almost anything reveals some very nice textures and all in all I was very impressed by what I saw.  The introductory story is told through some comic book-esque cinematics, but compared to the rest of the game, and are almost instantly forgettable. 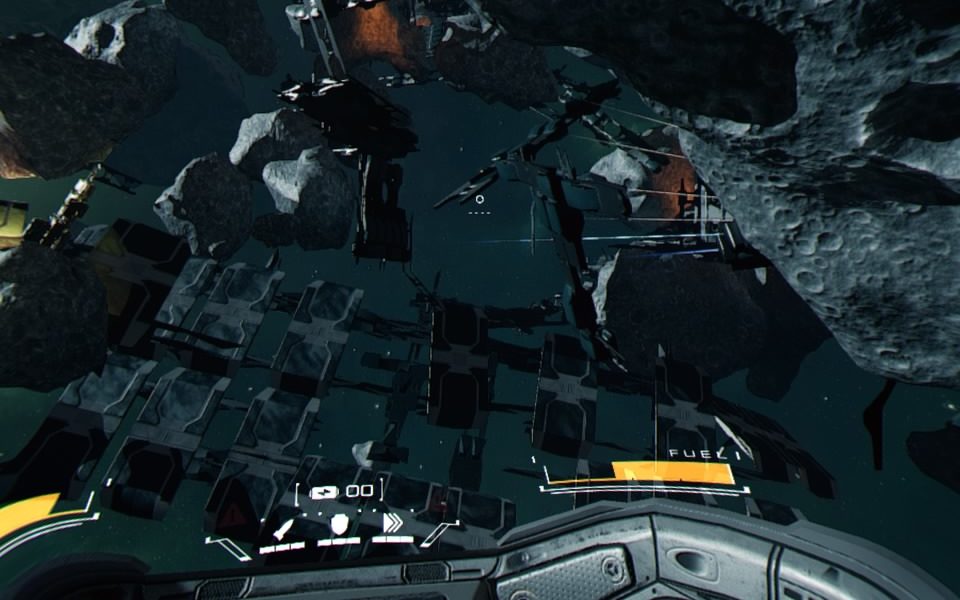 At times this game can look absolutely stunning

Solitary is the best way I can describe the audio and other then some very brief conversations with your Captain, it’s just you.  The sound of your breath or the hollow thud as you run into something all just hammer home that you are alone.  No music plays, and you are left with nothing but your wits as you try and figure out a way to get out of the situation you have found yourself in.  The voice acting, though limited, is more then competent and everyone involved deliverers their lines flawlessly.  It gets intense when your oxygen gets low and your breathing getting heavier as you frantically search for an air canister, hopefully floating nearby.

The game really is all about floating in space and if your constitution can handle it, put on simulation.  The controls are crazy sensitive and complex, but when you start to figure it out, the simulation of 0 G forces on you is a spectacle, but there is steep learning curve to mastering these controls.  In the campaign you will have to keep you Oxygen and Fuel levels up and thankfully canisters of both can found floating around all over and only on a couple of occasions was this ever an issue.  Certain consoles may require some ‘nands’ which are basically just batteries you can find, usually nearby, and add a little bit of item chasing.  Later on an enemy is introduced that you must avoid or incapacitate, lest it destroy you, and depending upon your skill and the control method used, the campaign should take between 2 to 4 hours…I was on the 4 hour side. 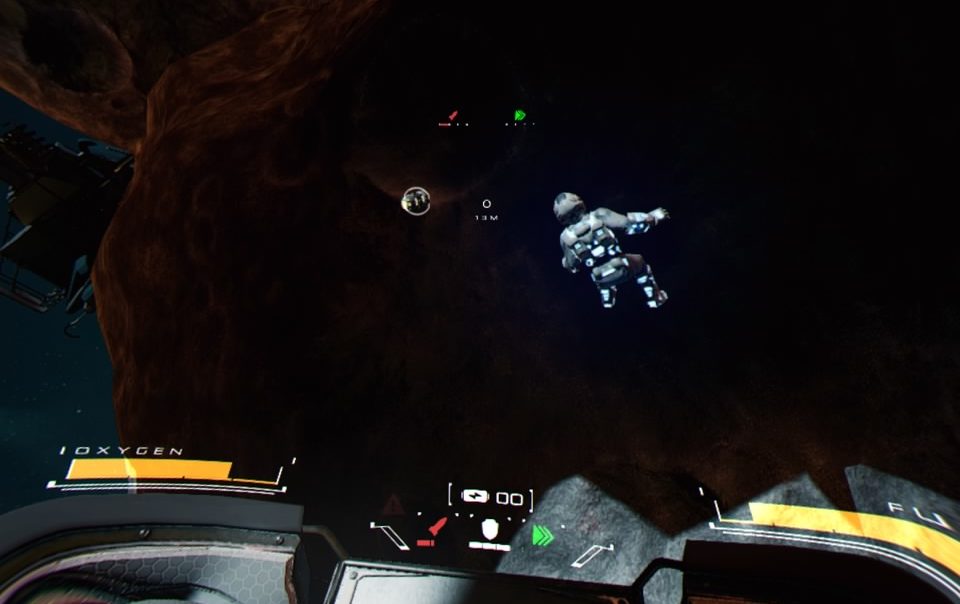 The multiplayer is a blast

Aside from the campaign is a 1 v 1 / 2 v 2 multiplayer which takes place in 1 of 2 modes.   The first is Package Extraction which has you battling for an item floating in space and whoever gets it has to bring it back to a terminal…basically capture the flag.  It’s hilariously fun to watch your opponent boosting toward the package only to miss and go careening off into space, giving you the time you need to take it yourself.   Race is exactly that and expands upon the tutorial by requiring you to fly through hoops the fastest.  Both modes have 2 maps, and both are equally fun.

Slowing down and even reversing position is tied to the thumb sticks, with all stop being performed by pressing in both of them at the same time.  I found this didn’t always work well and hit a few objects that I would have otherwise avoided in similar situations.  Secondly is the checkpoint system, which works great in the first chapter, but the randomness of the space debris in the second had these bookmarks spread to far apart and upon death, I was sent back a long way as the checkpoints are based on clearing objectives, not distance travelled or time spent playing.  Detached needs a quick save option besides the default checkpoint system just to streamline the latter half of the game a bit better.  Lastly would be the controls, which I dug, but fair warning to all, even at their easiest, they are complex and when combined with the high levels of motion can make for a harrowing time.  I personally loved just how simulation this game got, but because of that factor, it may just not be for everybody.  Lastly, the multiplayer divided users my control scheme so those playing on simulation may have a harder time finding games then those playing arcade mode. 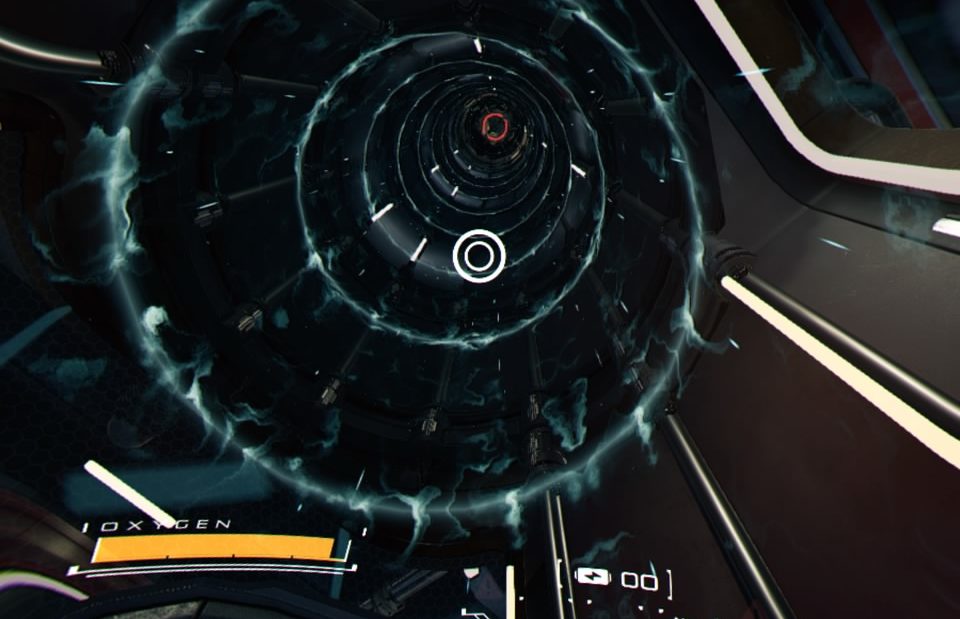 Detached is a little boy’s dream come to life.  Not only d o you play as an astronaut, but you feel like one as well.  Every missteps, over acceleration and bump is intense as you try and course correct and pray you don’t hit anything.  When you lose control it’s absolutely insane and while the game relies almost solely upon the real-life limits of the navigation mechanic, I had a lot of fun drifting through space, stressing about used fuel and every breath taken.

What would I pay? $25 is perfect for this.  It may be available out of VR, but these types of games are meant for our headsets.  It’s not the most action packed game, but the way this simulates floating in space makes this a wholly unique experience in VR that works great!