Ultrawings has been out for a while on the other headsets and now we PSVR users get our chance at the flight stick thanks to the wonders of modern technology…and maybe some porting efforts from the dev.  Many have been clamoring for a flight sim since the PSVR’s release and now we have our first taste in this cartoonish simulator. 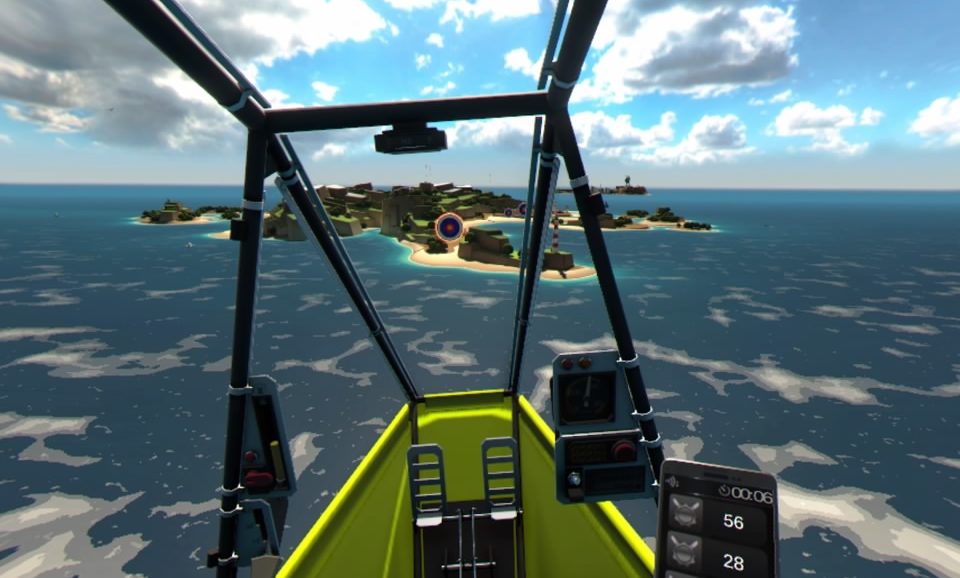 Whether you choose DS4 or Move, both methods can be a bit finicky.  That’s not to say they are bad, but they can be troublesome.  With the Moves you are given 2 hands, each mapped to a controller, and are required to press and grab objects inside your plane.  Buttons and switches aren’t really a big issue, but the flight stick in between where your feet would be (you don’t have a body) requires you to grab it by holding the trigger than move it around as if you were holding it real life. I found myself often steering to much or moving my controller further than the ‘physical’ limitations of the in-game stick, causing the plane to not respond the way I wanted it to.  Mental adjustments had me accounting for this and the more I played, the more I got used to that mechanic, but it never truly felt comfortable.  DS4 on the other hand assigns most of the interaction to button presses and the thumb sticks, and while this method is easier to play with, it is nowhere near as immersive or fun.  If you have the option, stick with the moves. 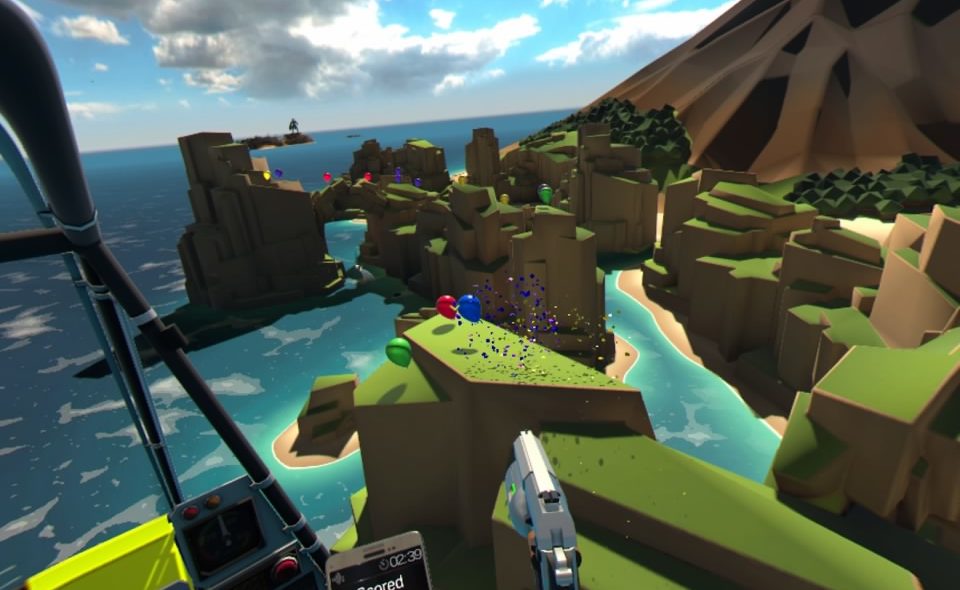 If you offer balloon shooting from small aircraft with a real gun…please call me!

So, obviously the core mechanic here is flight, but it’s not just flying as you must also take-off and land your planes, which requires adjusting the throttle, switches and dials.  Missions require you to fly through rings, touch down on specific points, take pictures or shoot down balloons.  The first 2 game types fit well with the sim side of this game, but the latter 2 felt a little out of place.  Taking a picture requires you to aim a tablet at the area in question and capture that image.  Using the Move controllers allows you to pick the tablet up and offers a little more freedom when lining up shots.  My biggest complaint with this mode is that there are no identifiers as to where these picture areas are, besides the picture on the tablet, and I found myself flying aimlessly on more than one occasion as I searched for my Kodak moment (do people still get that reference!?).  Shooting balloons on the other hand just feels wrong.  For starters, the trigger button is used to pick things up, meaning the center button on the Move controllers is used to fire, creating an odd disconnect between you and your virtual hands.  I also found that the position of the gun in the game seemed low, requiring me to tilt my hands higher than what felt right to line up shots properly.

The visuals are where I was mostly disappointed.  Don’t get me wrong, they don’t look terrible by any measure, but they are kind of plain and boring.  The planes look okay and carry some nice details, especially in the cockpit with all the switches and dials, but the surrounding environments lack a lot of detail, making the play area feel a little lifeless.  You do see boats in the water and other planes in the air which helps, and the menu screens offer some fun little details and interactions, but when you are flying, things just look bland.  Counter to that is the very impressive draw distance and relatively large area you can fly in and explore.  If you can see it, you can fly there and that’s pretty impressive. 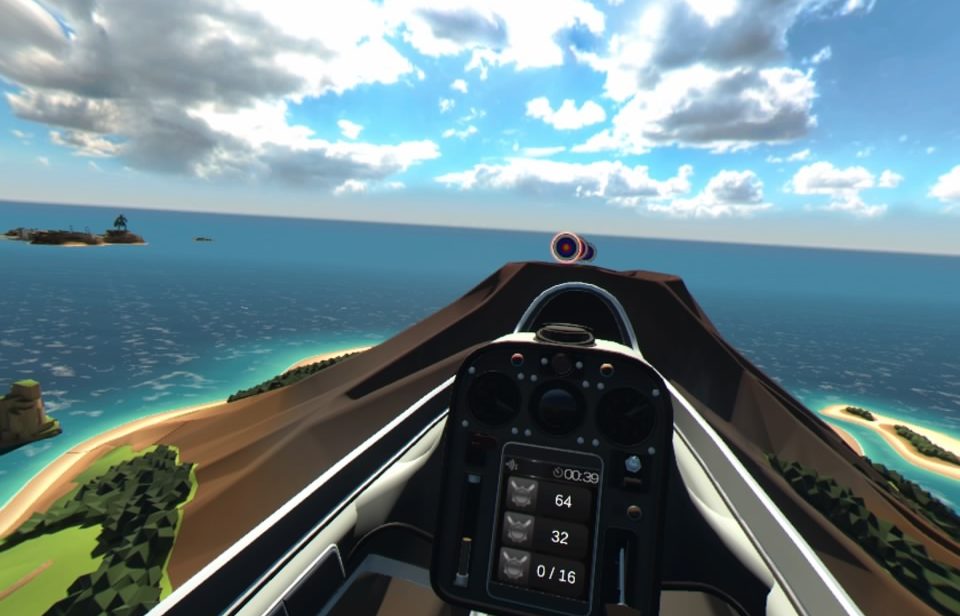 You can’t tell from the pic, but flying at top speeds is pretty fun!

Audio wise, your vehicles sound spot-on with the little wrrrrrrr of the smaller planes sounding exactly as they should and the larger ones carrying a little more ‘oomph!’  Some friendly music accompanies you on the missions you are given, and the tutorial content is all voiced by 2 competent actors that do their job nicely.  No complaints in this department.

The ultimate flaws here lie within the very nature of the game…simulations can be kind of boring.  Every mission completed earns you money, which can be used to unlock new areas of the game and new planes as well. Your first aircraft is incredibly slow and though you can unlock more, the number of missions you must complete to do that is on the high side.  Especially when, for the most part, the missions play the same.  Take off or take control of a plane mid-flight followed by balloon shooting, flying through hoops or taking pictures and then landing.  While each goal scatters objectives around an island, these missions’ kind of end up feeling the same.  When I was required to fly long distances, I thought it would be a great time to check out the scenery, but as the scenery doesn’t look that good, I was kind of left to my own thoughts and my motivation to continue, knowing it would just be more of the same, dwindled. 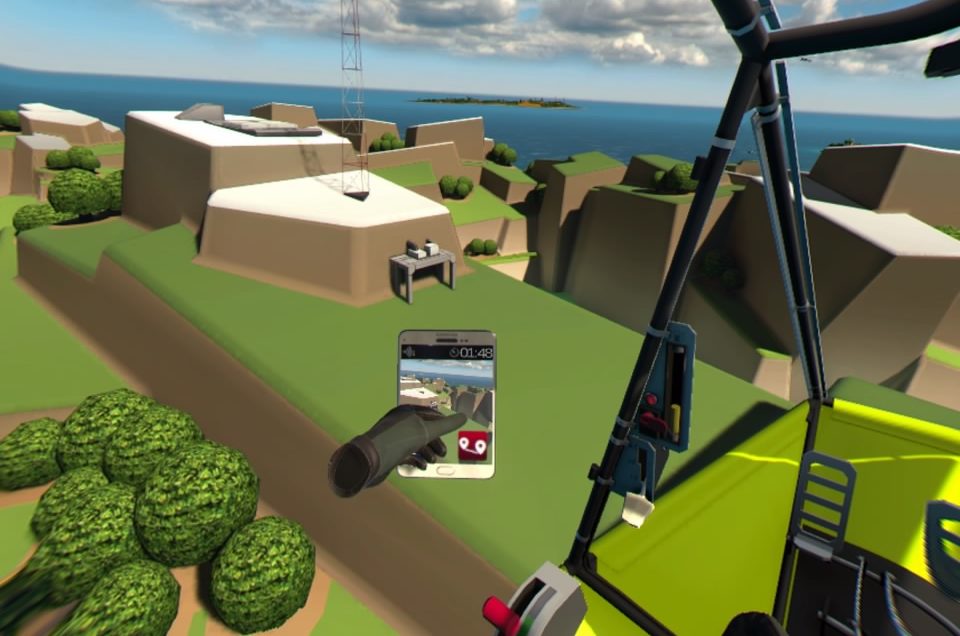 Driving while taking a picture is way harder than it looks!

All my moaning aside, this is still a very solid flight sim and those looking to experience flight in VR will be pleasantly surprised by this.  When you do cruise at top speeds, it is exhilarating and flying through canyons or just getting to massive heights for a crazy dive is an unparalleled experience.  Ultrawings has its shortcomings and does get fairly repetitive, but also contains a tonne of missions and plenty of reasons to come back for a quick visit and like I said, there is nothing else like it currently available.

What would I pay? The $20 asking price isn’t nuts, and though I got bored with it after a few hours, I feel some will find hours more of entertainment especially when you consider just how many missions are available as well as the unlockable planes.