*Note, after conversing with the devs, they have already addressed a few issues I mentioned in the game and that patch should be out soon after launch and I will have an updated review at that time*

If you love multitasking and making burgers than you are going to love VR The Diner Duo.  For those familiar with other games in the genre (Job Simulator, Dead Hungry) this feels right at home with those sim type games.  In fact, this plays so similar to Dead Hungry that I can firmly say that if you didn’t care for that title, I doubt you’ll like this anymore.  Still, for those that love frenetic job sims, this has some of its own unique flare that is sure to entertain fans of the genre. 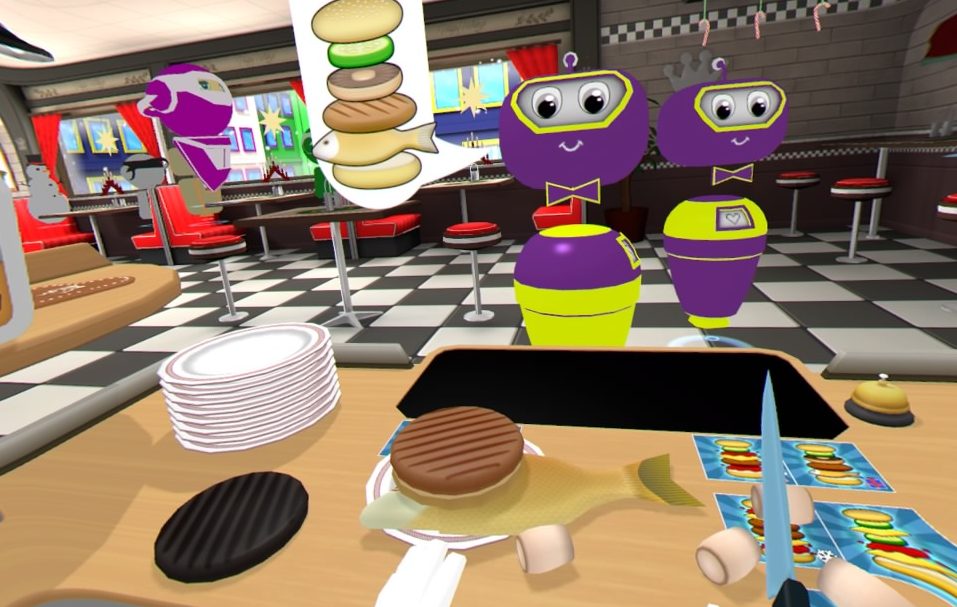 You better on your toes as the orders start coming in

For the single player content, it’s Move controllers only here and the opening ‘calibration’ screen allows you to adjust the height of your virtual counter tops for your own comfort.  After that you basically just pick up items with the trigger and move them where they need to go.  Setting plates and buns on the counter before you, adding a host of toppings and placing burgers, mushrooms and fish on the grill gets crazy difficult as the campaign progresses.  The burger requests get nuts and the longer you take, the less points you receive and you risk that order being cancelled as well with the robot patrons storming off in annoyance.  The other single player mode involves the same mechanics, but with deserts and you aren’t required to make anything, just place an assortment of requested deserts in a tray.  It’s an easier mode that bypasses many of the frustrations I had with the burger making gameplay.

Throughout my play I encountered numerous tracking issues that hampered my experience and I wished the game had a slightly better calibration set up as it took me a few tries to adjust the camera to a proper angle and still I ran into more than few minor issues that annoyed me.  I encountered a glitch that placed an invisible, immovable object directly in front of me forcing me to avoid placing anything in that area as it would be at an odd angle or difficult to adjust after the fact.  I also had issues with using the knife to cut cucumbers, mushrooms and fish that constantly cost me precious seconds as I fumbled to slice and dice my food.  My last major issue occurred on more than one occasion and placed an item on my burger in the wrong order. Typically you place one item on top of the last in the pattern ordered to complete the burger, but on a few occasions, the last item I placed on top somehow maneuvered it’s way to the middle of my burger, thus making my order incomplete and forcing me to take the burger apart(no easy task) or start over from scratch, which usually led to failure. 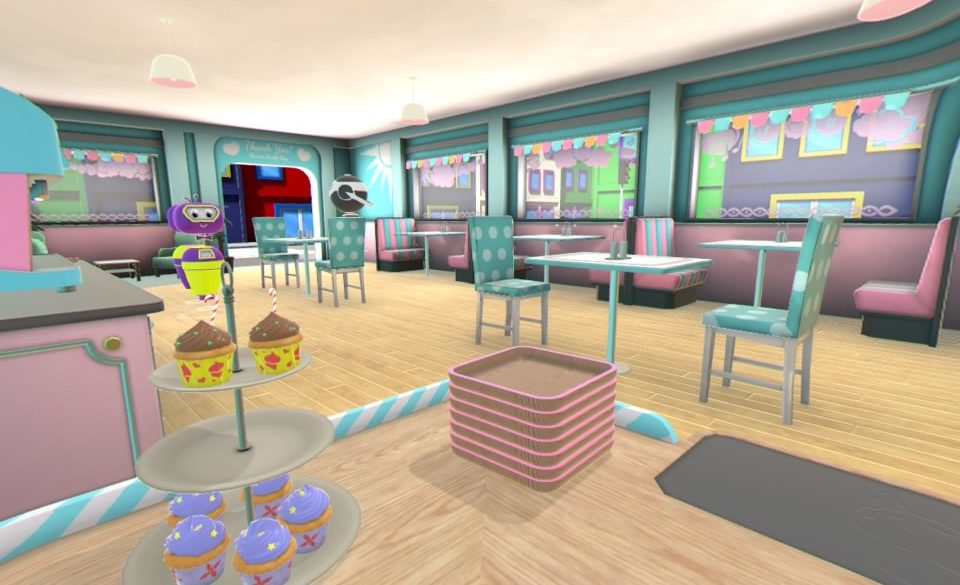 The desert portion of this game is substantially easier

Diner Duo has a very simplistic look with the action taking place in a singular cafe type building that only changes up the wall paper in between ‘Winter’ and ‘Cupcake’ modes.  Your patrons are cartoonish floating robots that don’t carry to much in the way of animation, but as the action picks up, I appreciated the simple nature of the visuals and forgave it for any shortcomings in this department.  On the audio side, it’s mostly sound prompts signaling that cooked food is ready or that patrons are (un)happy with their orders.   The music consists of some mix tapes that you can swap up for some different kinds of elevator music.  Bottom line is that the presentation may not be stunning, but it is polished and lends itself well to the gameplay.

If you are looking to play with friends, you can, thanks to some local, social screen co-op.  While the headset wearer plays as normal, your friend can play as the server using the DS4 controller, making for some fun times as he or she must take orders, fill drinks and keep customers happy while the headset wearer prepares those meals.  Things can get pretty hectic for both players as screwing a drink or order can hurt both players…communication is key!  It’s a fun little addition that adds a lot of bonus replayability to the game and is a great way to share VR in a social setting.

All that said, I’m not good at the burger making aspects of the game and I was frustrated by the what was being asked of me.  That’s not to say it’s bad, and those looking to put their multitasking skills to the test are sure to pull a lot more out of this than myself. Each stage ranks you on how fast you served the meals and applies a score that you can strive to beat should you feel the need to do so.  There is a harder option to choose, requiring you to use more burger ingredients, but this option just worked me over and I failed miserably over and over and over. 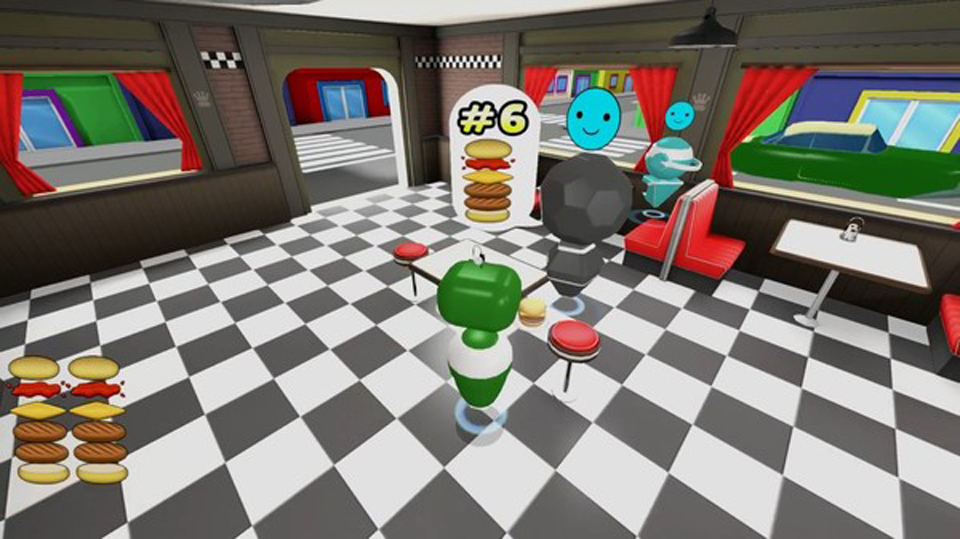 Micro managing and teamwork are key when playing with a friend

For those looking for a food prep simulating challenge than this is just that and the addition of some couch co-op action is a nice bonus.  With a 30 mission campaign, 2 difficulty options, 2 modes and some unlockable outfits, I can’t deny the fun that will be had by many people as they struggle to serve patrons in a timely fashion.  With that said, if this comedic simulator genre has never appealed to you, this won’t do much to remedy that.

What would I pay? $15 is a fine asking point given the content, provided you have an interest in the genre.  For people like myself, half that price makes more sense as I just lost interest long before I had completed even half of the games content.

Whirly Bird Games provided The VR Grid with a review code for this game and, regardless of this interview, we thank them for that!