Infinity Fall is a sci-fi themed, single player VR shooter that takes place entirely in zero gravity, an excellent and unique gameplay mechanic that fits perfectly into VR. Unfortunately, it falls flat in most other aspects. This game uses an excellent six-dimensional gimmick, but this doesn’t redeem its many flaws.

In Infinity Fall, the player must fight through a space station to escape “Dave,” the starship’s rogue AI central computer. In addition to wiping out the ship’s crew, Dave disabled its gravity. As a result, the player must traverse the terrain by gliding through the air. The game uses a “grip” system, similar to that in “Climbey,” to allow this type of locomotion. You can grab any wall with your hands, allowing you to move however you want. You’re able to grab a wall with alternating hands to climb it like a rock wall, or a ladder. Alternatively, you can launch yourself off surfaces at high speeds, pushing off walls like the side of a swimming pool. These actions are all physics-based, with faster movement speeds the harder you fling yourself. This locomotion system feels perfect for VR and generally works well in Infinity Fall, granting freedom of movement. 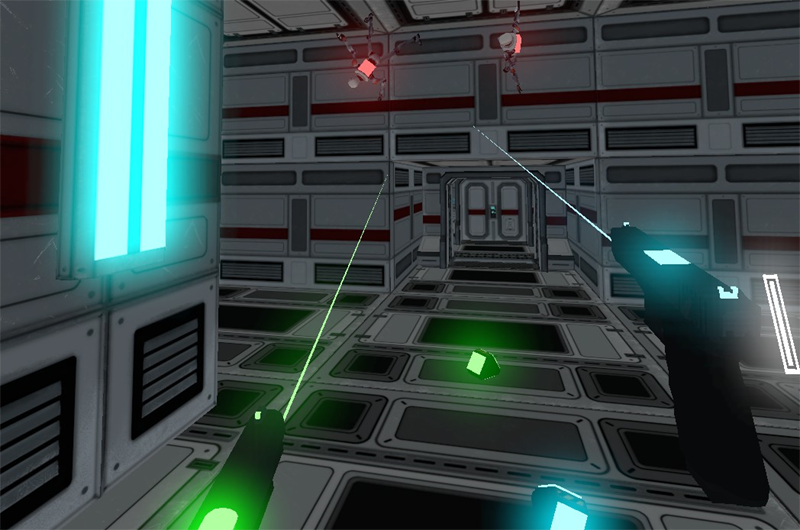 In zero gravity, dead enemies don’t float around much more aimlessly than you do

While the locomotion system in Infinity Fall is fun and unique, it results in secondhand issues that severely hinder the experience. When swinging yourself along a surface, letting go of the trackpad even a fraction of a second too late causes you to lose all momentum, awkwardly freezing in mid-air. Because of this, navigating large environments in zero gravity can be irritating at best, and infuriating at worst. When losing velocity in mid-air, you’ll need to find a new surface to launch yourself off of. In wide-open rooms, there won’t always be surfaces nearby. This results in several agonizing minutes of free-floating, at the pace of a drunken snail, until you reach a new surface.

Being stuck in mid-air is even more frustrating with enemies nearby. This game is very difficult, killing you at a moment’s notice if you aren’t quick on your feet. The challenge in Infinity Fall is actually fun and fair but contradicts the game’s movement system. This game requires fast-paced movement to survive, so being unfairly slowed down results in an unavoidable death. In unlucky situations, you might find yourself frozen in mid-air, with no surfaces within reach. When this happens, crashing the game and restarting from scratch is usually the only solution.

When you finally find a surface to grab, make sure you don’t accidentally hit something in your room. The locomotion system in Infinity Fall requires you physically reach for the closest grabbable surface, making this game even more liable for bedroom-destruction than “Gorn.”  For the same reason, this game is unexpectedly physically active and exhausting. While I usually appreciate VR games that yield a workout, physical activity in Infinity Fall is based entirely on your movement. Some well-performed leaps can fling you all the way to the other side of the room, while some maneuvers will send you slowly drifting in the wrong direction. Just keeping yourself under control requires strenuous exercise, even though the game’s movement system doesn’t actually demand it. When I break a sweat as a result of in-game movement patterns that I didn’t even want to do, such exercise just becomes an annoyance. 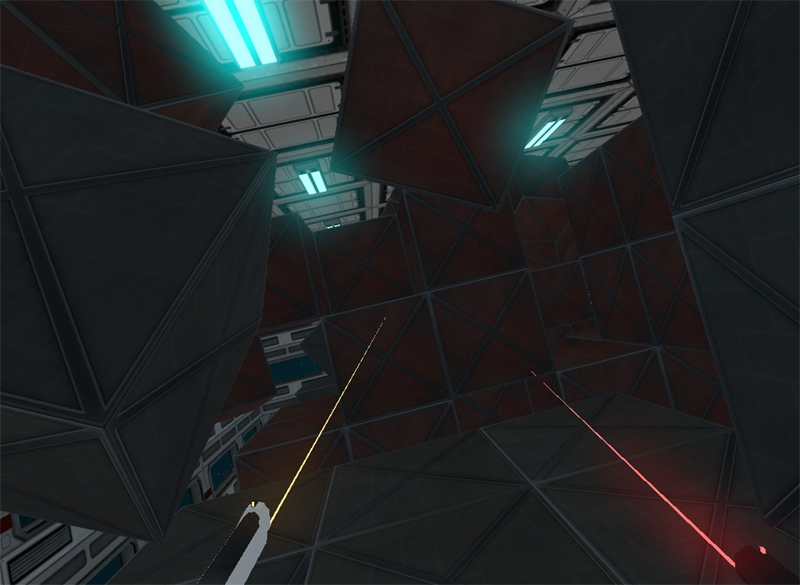 The game’s biggest challenge involves searching boxes for a keycard, which is as exciting as it sounds

Many of these locomotion-related issues are a result of Infinity Fall’s weakest aspect: its environment and graphical design. Every room takes one of two forms: expansive mazes of oversized ventilation shafts, and wide-open arenas with floating boxes. Mazes are easy to maneuver, with grabbable surfaces always within reach. However, their design is repetitive and boring. It’s easy to get lost during maze sequences, and while this is to be expected, such map structure worsens the earlier exercise-related issue. When I’m rapidly waving my arms to float in circles around a maze, it quickly stops feeling worth the effort. Large rooms are much more straightforward, but they’re much more prone to leaving you slowly floating in mid-air, with nothing to grab. As I touched on earlier, these moments can be frustrating enough to warrant a rage quit.

Throughout Infinity Fall, the environments themselves never seem to change much other than their basic shape. Everything is composed of identical, monotonous colors and textures. I got bored of the game ten minutes in, just because its environments are so drab and repetitive. Infinity Fall seems to be a beginner-level Unity engine project, and it shows. Textures look grainy and smudgy, while lighting remains constant throughout the game. The visuals look like that of an early-2000’s browser game, and the repetitive 90’s techno music follows the same theme.

One of Infinity Fall’s biggest design flaws is its visual assets. All it took was a quick Google search of “Unity asset robot” to reveal that nearly everything in Infinity Fall– from enemies, to weaponry- is taken directly from the asset store, copy-and-pasted, with little changed other than their colors. 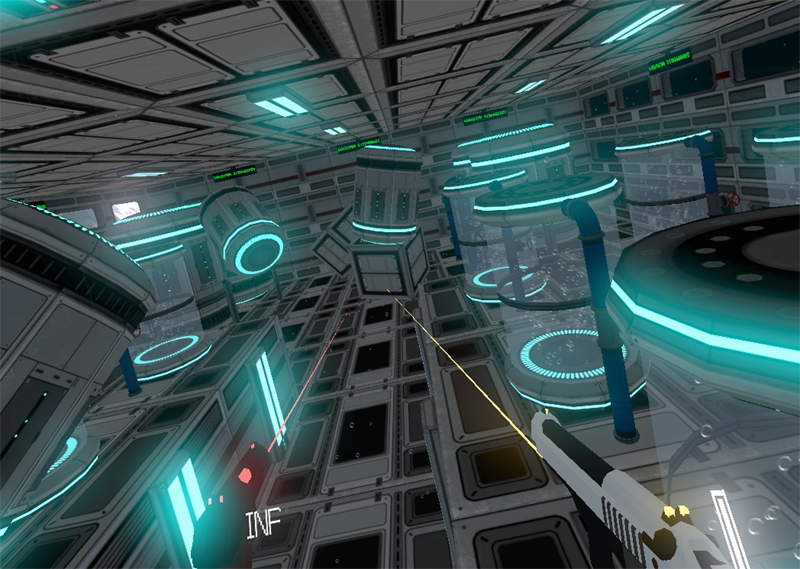 This is arguably the game’s most well-designed room, which doesn’t bode well for its other rooms

Throughout the game, you’re given four weapons, though these mostly feel like increasingly advanced copies of one another. While Infinity Fall is unabashedly a sci-fi game, the gun models used are modern or even World War 2-era handguns that shoot lasers. With the exception of one rapid-fire glock pistol, each gun differentiates only in its color and damage output.

Enemy design isn’t much more creative. Most opponents are drones, which are difficult to hit but die in one shot. There are humanoid robots that are easy to target but have higher damage and health than drones. Throughout most of the game, these are the only enemies. There are also mini-bosses, which feel generic and serve as little more than a chore. In contrast, the game’s final boss was well-designed and a fun challenge.

Infinity Fall is broken up into six test chambers, each with slightly different objectives. Some pit you against enemies or bosses, some require you find a keycard, and some serve as time trials. Infinity Fall is one of very few VR first-person shooters that are structured in a coherent, linear, campaign format. For what it’s worth, this game is certainly not a generic wave shooter. Still, most levels feel cliché and boring.

Any tests not involving combat feel like filler for the game’s content value. Finding keys feels like a forced scavenger hunt, while time trials are easy and repetitive.  The game took just over an hour for me to beat, with a lot of that time spent frustratedly drifting around due to the aforementioned locomotion issues. By the time I completed Infinity Fall, I felt like I’d only just finished a free demo or beta for the game. Considering its price, I was shocked by the game’s abrupt ending and meager length.

It feels like the developer couldn’t decide whether or not to add a story to Infinity Fall. The game’s antagonist, Dave, communicates with you via scrolling text on monitors throughout the map. Dave’s emoji-filled speech feels unplanned and overly casual. Reading these screens, the player is clearly meant to feel intimidated by Dave’s evil ways. Rather, I just felt like the developer was having a one-sided text conversation with me. These screens account for nearly all of the game’s story elements, giving you little insight into the narrative. The one exception is a single wall of text that appears after you complete the game, detailing the events that follow. Ironically, this final page depicts a clever, interesting story, which was largely devoid from the game itself. The story seems to be a spin-off of Stanley Kubrick’s “2001: A Space Odyssey,” but Infinity Fall does no justice to the classic film. The narrative isn’t bad per se but was evidently added as an unprofessional afterthought. To my surprise, at least the post-ending credits sequence is cool. 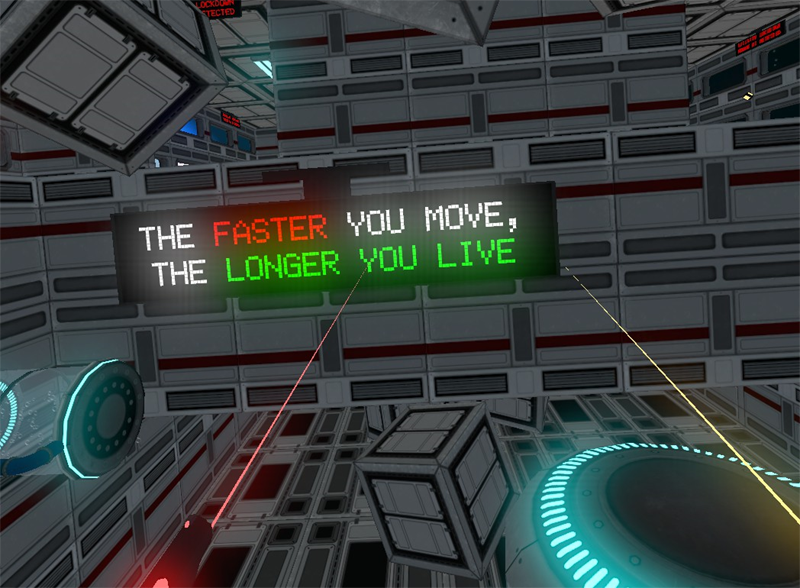 Is this a suggestion, or a warning? Is this a tutorial hint, or is Dave taunting me? Who knows?

The game’s user interface isn’t very good either. While dying in-game spawns you at the latest checkpoint, you can’t save the game and quit. The main menu’s “continue game” button doesn’t work, so you must beat the whole game in one go, or risk losing your progress. Infinity Fall also hosts a totally unnecessary backpack system, which is meant for holding key-cards and guns. Being forced to manually swipe cards to unlock doors already feels arbitrary, as most games with keys integrate them as passive items that you never need to access. There’s also no reason that you shouldn’t be able to switch guns using a controller button, rather than having to open and manage your inventory. The inventory system is fairly simple, but completely obsolete. With absolutely no benefit to gameplay, it adds confusion while removing immersion.

What would I pay for it?  I would not pay anything for Infinity Fall. If its weapons, enemies, interface, and environment were all improved, it might be worth $5-10 because of its fun and unique zero-gravity movement system. As it stands, however, this game feels like a lost cause. Everything about it is frustrating and dull. For roughly an hour of substandard gameplay, Infinity Fall’s asking price of $15 is not worth paying, regardless of your interest in the game.

Korte Games provided The VR Grid with a review code for this title and, regardless of this review, we thank them for that!