This review has been updated to reflect the V1.1 Checkpoint Update released October 19, 2022

As a relative nerd for most of my life, I have dabbled in all sorts of media with one standout being the future set anime shows from the late 80’s & early 90’s which includes stuff like Ghost in the Shell & Akira, the latter of which I have to believe is the biggest inspiration for Runner.  In Runner, you are just that, a mod-courier named Mina who is hired to deliver a package across the colony using the Thoroughfare, a massive high-speed expressway full of dangers.  If you have seen Akira, the bike scenes in that are near epic and Runner looks to bring that to our headset and I’m not going to lie, when I first saw the trailer for this, I was fairly stoked. 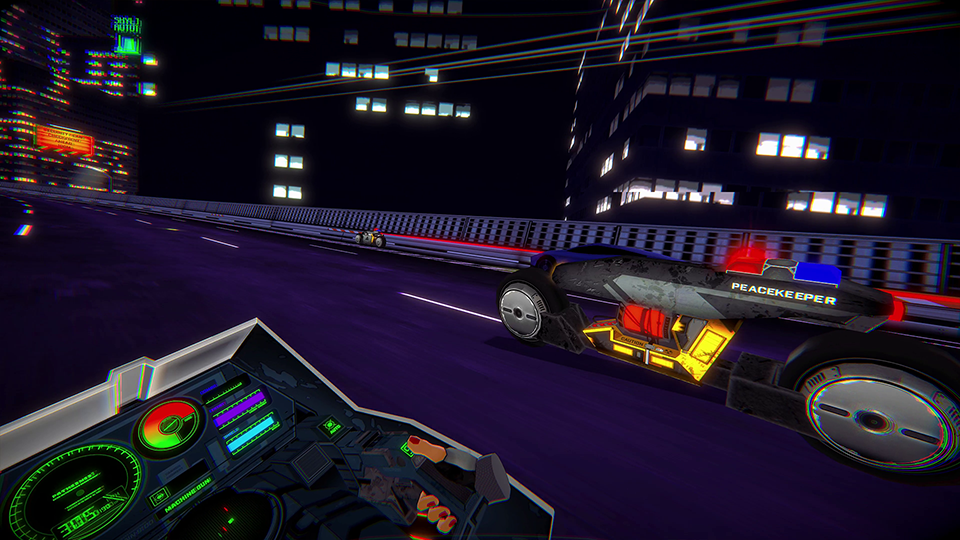 The chases are fast paced and intense!

The goal of each of the seven stages is simple…get to the end without dying.  There’s a substantially larger story at play here with the setting taking place off-earth on a mining colony situated on a planet that doesn’t spin, so one side is blazingly hot while the other is deathly cold and the population lives in the safe zone between those 2 sides. It’s a Cyberpunk setting packed full of homages and a fairly intriguing, in-depth world, though to experience the bulk of the story, you actually need to download the free companion app for your mobile device.  What’s in the game is much more stripped back leaving the player to fill in much of the gaps save for an opening cutscene and communication with your handler & intel provided in between missions.  It’s unfortunate how much is missing from the actual game as it’s very clear that the developers took the time to create this awesome world and it would have been nice to see a little more of the story included, though what’s here still gets the job done and sets the stage for your harrowing adventure. 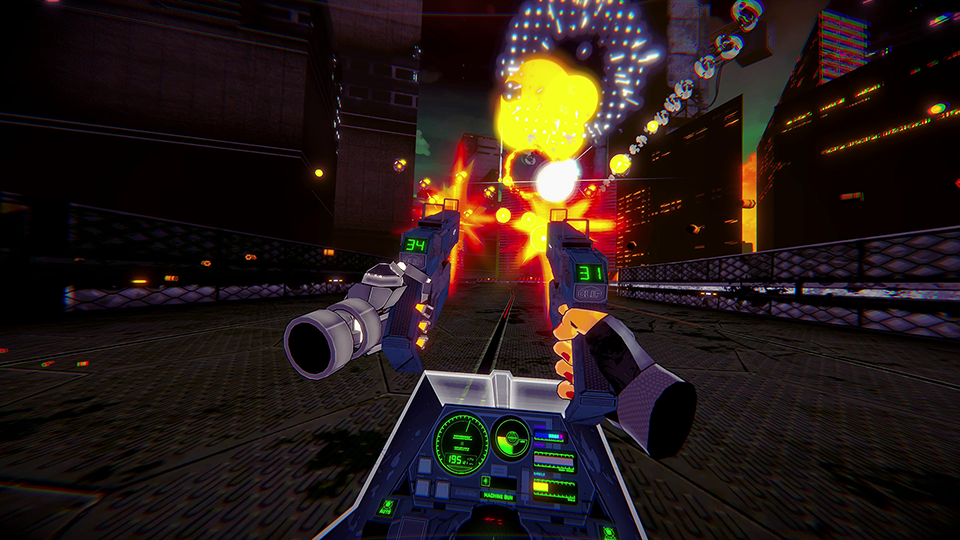 Explosions are a joy to behold.

There are 2 modes of play available, playing the campaign on the singular difficulty or playing through the campaign unable to die, which allows those that might not have the skills to get through the 7 stages the chance to still experience the different environments, enemies, boss battles & story, though your scores won’t count towards the online leaderboards, achievements won’t unlock nor will new bikes.  Comfort options are limited to adjusting your height relative to the bike, how much the bike leans when veering left or right & adjustable blinders. The fast-paced nature of the game could trigger those who experience motion sickness, though with the comfort settings included I think most should be able to handle the high-speed action. Controlling your bike is easy enough as whichever hand is holding the bike, or both if you’re not holding a gun, will allow you steer it left or right using the thumbsticks.  Your bike has its own weapons as do you thanks to 2 pistols slotted in front of you.  You always move at constant pace down along the freeway though this only serves to ensure the game is always moving at a fast pace as, besides steering, you can increase or slow down your speed to accommodate the enemies you’ll be facing by pressing up or down on the thumbstick.  Pickups will show up on each procedurally generated stage that refill your shields, give you grenades or missiles, modify the secondary fire of your pistols or change the weapon mounted to your bike with each option offering its own strengths and weaknesses.  Your last combat option is your sword which can deflect or destroy incoming projectiles, with your guns being able to do the latter as well.  You also collect combo energy by cruising near traffic and have the ability to grab both pistols, triggering slow motion mode that lets you unleash all hell on whatever you decide to shoot…for a few seconds or when ammo runs out. Lastly would be those other bikes, 1 hidden in each stage, that offer not just a new look but different armour, speed, manoeuvrability or and custom abilities special to each ride.  All these mechanics work wonderfully together, minus the sword which I found to be more cumbersome than it’s worth, to make for an engaging and action-packed Road Rash type racer save for one key element, it’s really freaking hard! 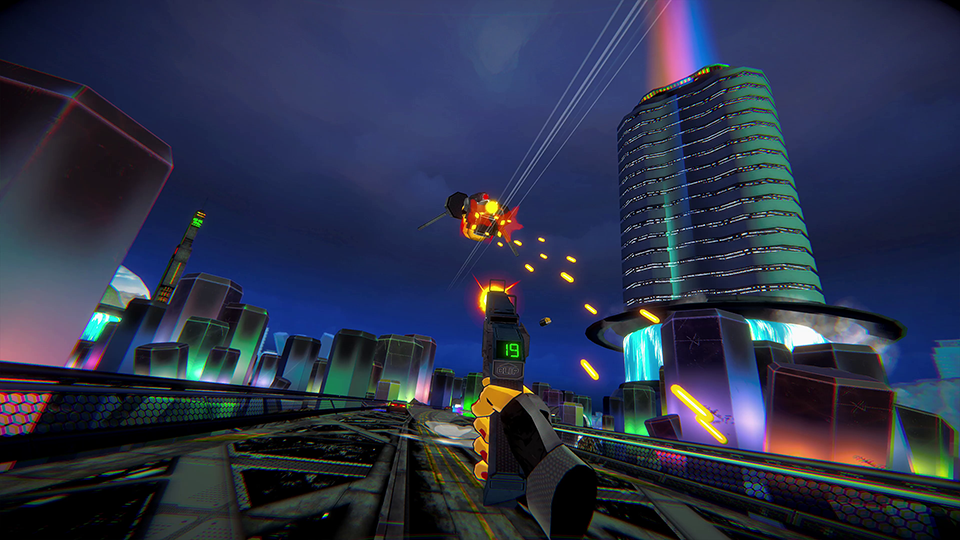 Always be ready from attacks from above.

The opening stage eased me into the various combat and bike mechanics, and it wasn’t before too long I was destroying everything in my sight with relative ease, cruising along the thoroughfare dodging traffic, collecting pick-ups and power-ups and having a good old time, then I reached the first boss, the armored razorback.  What ensued was a quick death as it unloaded its armament at me before I had properly learned its attack patterns.  Upon death, you have 2 options, restart the entire stage from the beginning or select a checkpoint that spawn you close to where you died, but a cost to your points & leaderboard ranking.  It’s a solid system that rewards hardcores for being just that but let’s those with lesser skills still experience every stage, boss & enemy all while still letting you accrue scores & unlock bikes at the cost of leaderboard glory. 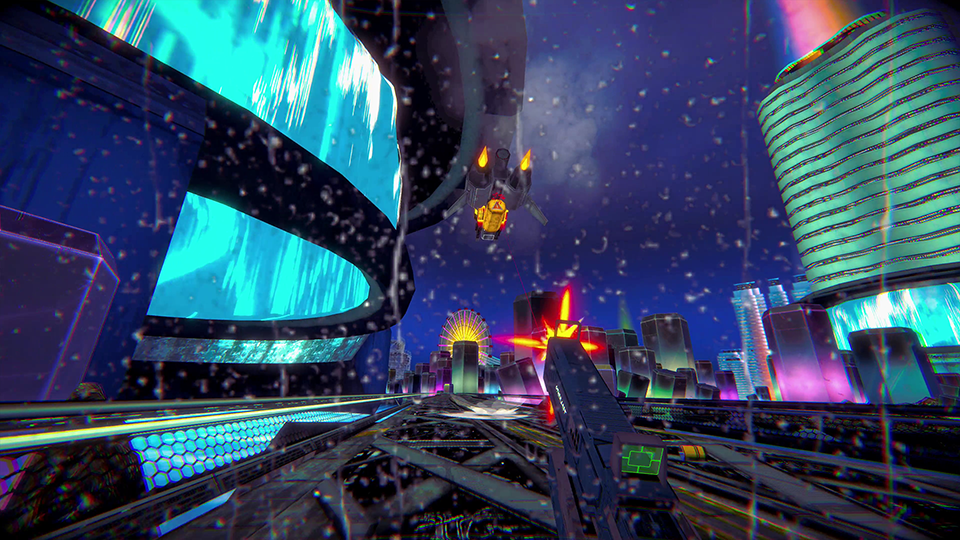 The water stage was visually, my favourite one.

It’s that variety in the cityscapes, enemies, and the speeds you travel at that does make this so exhilarating and thanks to that retro art style, it all felt familiar as if I’d been to this world before. That’s not to say there aren’t some distinctive settings to check out with my personal standout being the water themed level that has floating buildings pouring water down to the planets surface.  Cruising along the streets at top speeds (and they do feel incredibly fast), skirting traffic to get those energy boost, shooting at police scanners so they don’t hinder your progress is nothing short of exhilarating and I truly did feel like I was a part of a classic anime film.  The enemies you face also come in a decent variety with other automated bikes trying to chase you down to much bigger vehicles like armoured cars & tanks as well as flying drones ranging from some the size of basketball to full on assault cruisers along with a few more random foes. Everything in here looks sharp and crisp though in the middle of combat, it can sometimes be hard to take in your surrounding so in those moments between the action, it’s fun to take in the sights with a highlight moment being when you kill a larger foe or boss while in slow-mo mode, which allowed me to really enjoy those anime explosions.

Sound design is on point with a wonderful retro soundtrack at play and top-quality voice acting thanks to the stellar cast used.  3D audio is on point and utilized as vehicles and bosses may attack or come at you from one side or the other with your only warning being the sounds of their gunfire or engines letting you know to move out of the way or shoot those targets you didn’t see.  During the dead drop missions, you can access intel which may provide clues for the next mission and change up every time you play though unfortunately, the voice work that was done for the mobile app for these characters is missing, leaving us with a simple image and text 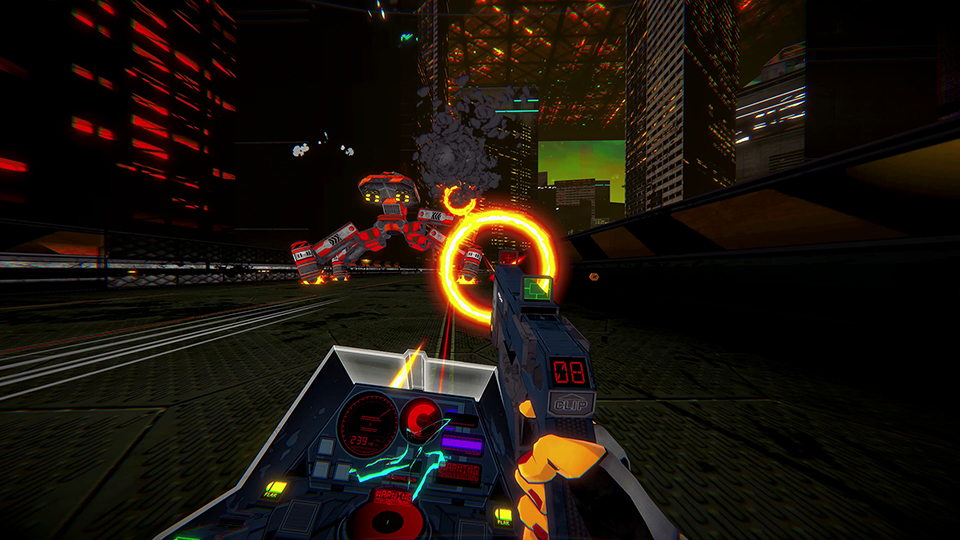 In many ways this feels like an arcade shooter from the 90’s but offers enough options to ensure that anyone can hop on a bike and have a good time.  Each of the 7 stages will take somewhere in the 15-to-25-minute range to conquer based upon your skills, giving this decent content value considering the budget asking price and some replay value if you do care about leaderboard scores or want to find those hidden bikes.  With plenty of nostalgic charm, a sleek world and breakneck speeds, it’s an intense, thrilling and challenging ride!

Truant Pixel LLC provided The VR GRid with a press code for this title and, regardless of this review, we thank them for that!