Originally released on the HTC Vive is this time travelling investigation game which has you journeying back to the Jurassic Era in search of a solution to a cure for a virus devastating the populace in the future.  Dual Shock controller is the only control option available and this game was reviewed on a standard PS4. 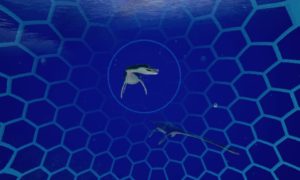 Don’t get to close…oh wait, these guys you can!!!

The opening level introduces the underwater world you will be exploring.  Navigation is handled thanks to your flight pod and controls allow for basic movement.  Up/Down, Left/Right and Throttle/Reverse are the only methods of movement available and while that may seem restrictive, it works well given the games objectives.  The other available controls are different types of analyzers and tools to help you uncover the mysteries of the past.  Exploring oceanic depths and analyzing creatures to determine the origin and nature of the virus ravaging the future Earth is your sole goal.  The one element that separates this game from other investigation games is the slow motion ability, allowing you to get close and scan any animals, though it does run out so make sure you away from the jaws of any unfriendly animals.  Action is not the name of the game here, but that doesn’t mean there isn’t something worth playing here.

With 4 different stages to choose from along with a sort of hub level you visit in between missions, there does seem to be a slight lack of content.  Accompanying you on your journey is Roberto (Rob for short), an AI who assists in pointing you in the right direction on each mission along with explaining the results of any specific scan you may have performed.  During the hub levels you are greeted with a video from a scientist explaining the current global situation.  It feels a bit odd to have an FMV supplanted over the digital world around you, especially given the ‘B’ level acting present.  The videos do the job but seems more a like a last minute add-on than a fully fleshed out idea.  The levels differentiate themselves enough though they do start to blend together as the game progresses with only the different animals providing any real difference.

Visually this game is both great and deplorable.  The ocean depths look great at first glance and while the animals aren’t photorealistic, get close enough and they still look pretty darn fine.  Besides the fauna though is a distinct lack of flora.  Levels are devoid of any other life besides the animals you have to investigate, excluding the teleporting fish which don’t swim naturally but rather jerk forward as if transporting a foot ahead of themselves…it looks awful.  Your different scanners also offer views inside these prehistoric monsters, but some scans are not universal.   The animals all look really good and the fog used for the ocean makes the ocean look real.  The surface as well looks pretty nice and while not as detailed as Ocean Descent, the full freedom of movement makes up for that. 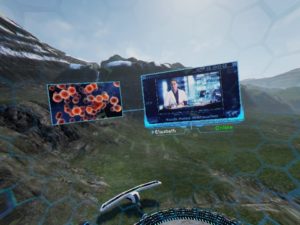 Make sure you enlarge this and have a look. It looks even worse in VR

Distance is this games major visual flaw.  While objects close to you are nicely detailed.  Anything far away become a pixelated mess.  This is less noticeable in the water missions than the hub.  I have never seen a game ignore aliasing as much as this one does.  Everything not your ship is a blob of pixels and sharp edges until you drive right up to it.  The video feeds as well don’t look much better.  It could be the shortcomings of porting from Vive to PSVR and maybe playing on a PS Pro remedies this somewhat(untested), but until you see it, it’s hard to believe just how bad some aspects of this game can look.

The audio is okay.  While Rob, your companion, delivers monotone lines about creatures and the plot of the game after every mission he also kept telling me to take a break.  This may be Minority Inc’s cute way of advising VR breaks, but even the first time Rob made the suggestion annoyed me.  I mentioned the ‘B’ movie acting already right? It pushes the plot along, but it’s nothing exciting in any way.  The surrounding audio sounded muted to me (with headphones) and while different animals make a variety of noises it all just felt muted and a little quiet.  Nothing game breaking here just minor annoyances.

Completing the game gives you a percentage of success and unlocks the ability to go back and revisit levels to improve your score.  Doing this simply unlocks some audio and videos.  There was one aspect of the game that eluded me, and without spoiling anything I can only assume it’s mysteries are unlocked at 100% completion (I finished around 70%).  The key to success here is to scan everything you can, every successful new scan increases your completion percentage.

This a relaxed experience with a few action bits sprinkled in.  The core mechanics are exploration and analyzing and if that sounds boring to you, then this will be too.  For those interested in some Discovery Channel puzzle solving though, there is an enjoyable game here.  Distant visuals aside it does look good and watching the prehistoric beasts in action is really cool, just don’t get to close to the ones with sharp teeth.   I managed to complete this game about 3 and half hours and I suspect getting the full 100% will probably add another hour or two.

What would I pay? $20US seems a little more apt given what is here. It may be nitpicky but I do feel like this game is slightly over priced.  Time Machine VR definitely has its shortcomings, but also brings (underwater)dinosaurs to life and could be a pretty cool show piece for new VR users.