I like a bit of Trivia! A few years ago, I participated every Sunday in our local pub team, The Eggheads! We usually did quite badly until I discovered that on regular intervals I needed a ‘toilet break’, and locking myself away in a cubicle I could Google the answers and no one was the wiser. Our team went from near last place to either second or first! I never felt guilty as I hardly won anything other than bragging rights. 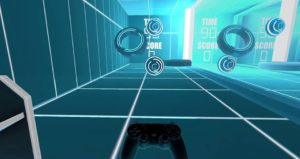 My other trivia antics involve the obligatory family game of Trivial Pursuit on Christmas Day and shouting out the answers while watching my favorite TV quiz shows. So, when I was handed the task of reviewing a trivia VR game for the PSVR, I thought of how fun and interesting it could be, and then I thought perhaps I can cheat at it. I was let down on both those lines of thought!

Let’s get the local mini games out the way first as they will probably take up just 5 minutes of your time. Jigsaw involves you placing an assortment of shapes in their respective holes in a wall in a certain time limit. It plays ok for the first 1 or 2 goes but afterwards I had no desire to ever play it again. The other is a game where you pick up metallic balls and throwing them through targets and rings for points. Slightly more fun and replayable, but not by a lot. The Dual Shock method of control is horrendous with either game. The camera tracking is all over the place, it all becomes very frustrating plus throwing balls with a Dual Shock controller in your hand is likely to a) smash the screen of your TV or b) bounce off the head of your baby brother! The motion controller is a far better option and makes both games more playable and less likely to raise any blood pressure! I feel these mini games would have had far more play had they been integrated into the main game.

The local play has two variations, one which has you racing around a sort of playing board, with your particular playing piece moving along with each successful answer to a multiple-choice question. The other has you behind a plinth in a TV studio and your answers make up your score against the other contestants. These can either be computer controlled bots or fellow humans. One advantage of the social TV aspect of the PSVR is that onlookers can participate with whatever the headset wearer is playing and here others can join in with the ‘fun.

Online matchmaking in this title is dicey at best.  Online matches require 6 people, including yourself, to start a game.  This leads to a lot of waiting, if you find a match at all.  Assuming you find a match, they play out exactly as you would expect with you buzzing in against others as fast as you can to answer correctly and get the highest score.  At the time of this review there was no voice chat support though the devs promise that feature very soon.  It’s fun, but suffers from the same shortcomings as the single player mode.

There are leaderboards so there is a bit of incentive to beat each other’s scores, but any good trivia game must have a good, varied selection of questions to start with and Quiz Night Tonight fails miserably.  Even after a few plays the questions started repeating themselves and there seems to be far too many questions involving superheroes and football, and not a great deal else. 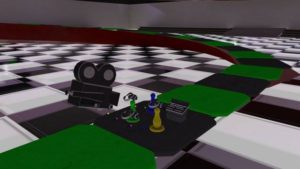 Race against the other playing pieces!

I found the Dual Shock control method better with the quiz side of the game as it’s easier to select the correct buttons correlating with the answers as opposed to the motion controller as I often pressed the wrong button with it being smaller.

So, if trivia is your thing I would suggest you avoid this and instead get that Trivial Pursuit game out of the wardrobe or head to your local drinking establishments quiz night, a lot more sociable fun than what is offered here unfortunately.

What would I pay? $14.99 is a large sum of money for what is essentially a game that has little fun and dwindling replay value along with an online component that just doesn’t work well.

Mardonpol Inc supplied theVRgrid with a review copy for this title and, regardless of our score, we thank them for that!