More than any other genre, suspense/horror games (and films)falls victim to over saturation and this is especially true in VR.  While the best experiences get notable attention (RE7, Obscura) many more middling efforts get lost in the shuffle. While awful ones can be forgotten, it’s the ones in the middle, the ones that offer some decent scares, but fall short in other ways that, unfortunately, get left behind.  What Don’t Knock Twice brings to the table pushes it past many of its competitors, but a few key issues hold it back from greatness. 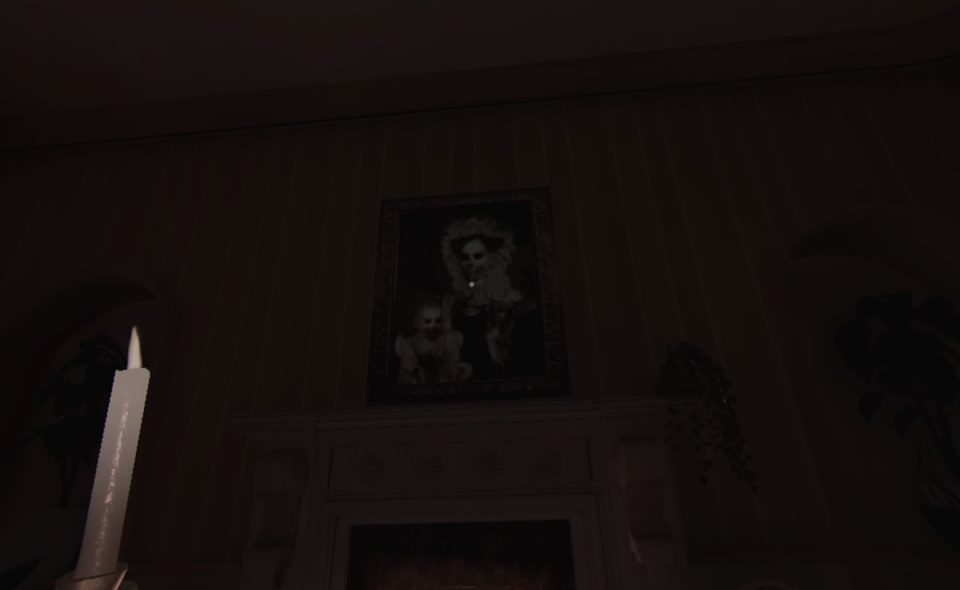 Ah creepy pictures…where would the horror genre be without you?

I’m gonna get the controls out of the way 1st.  They suck.  Whether using DS4 or Move controllers, it’s teleportation only and 90 degree turning.  I understand that this is option used to minimize sim (it’s not motion!) sickness, but by not including the option to free roam and turn, it offends veterans of VR as it both limits immersion and feels like a babying tactic.  I initially played with the DS4 and just found the controls limiting with the trigger buttons being used to manipulate objects and doors.  The controls are in no way broken, but if you have the option to use Move, use ‘em.  The extra control of both hands just feels better, though motions are still somewhat restricted.  An option to remap the buttons is missed as I often found myself hitting the wrong button to turn, or just use my hands.  I did appreciate that the ‘Triangle’ button extended your hands past your normal reach, allowing for an easier way to interact with objects just out of reach, though this mechanic is still a little to finicky and sensitive.  Lastly, because it’s teleportation only, it can be difficult to reposition yourself exactly where you want to, which was annoying, but is remedied somewhat by the hand extension mechanic.

The visuals here are also all over the map.  While some set pieces and scare moments look fantastic and creepy as F***, other environmental setting look low budget and immersion breaking (look at the clouds).  The house looks good, if not a bit sterile, but some of the objects scattered around look almost out of place.  Nothing game breaking, but for every good scare moment, there is an equal and opposite, “ugh, that doesn’t look that good” moment.  Still, though it sounds like I’m slagging on the game, overall the visuals looked ok and my issues are almost rendered moot by one key factor…the scares. 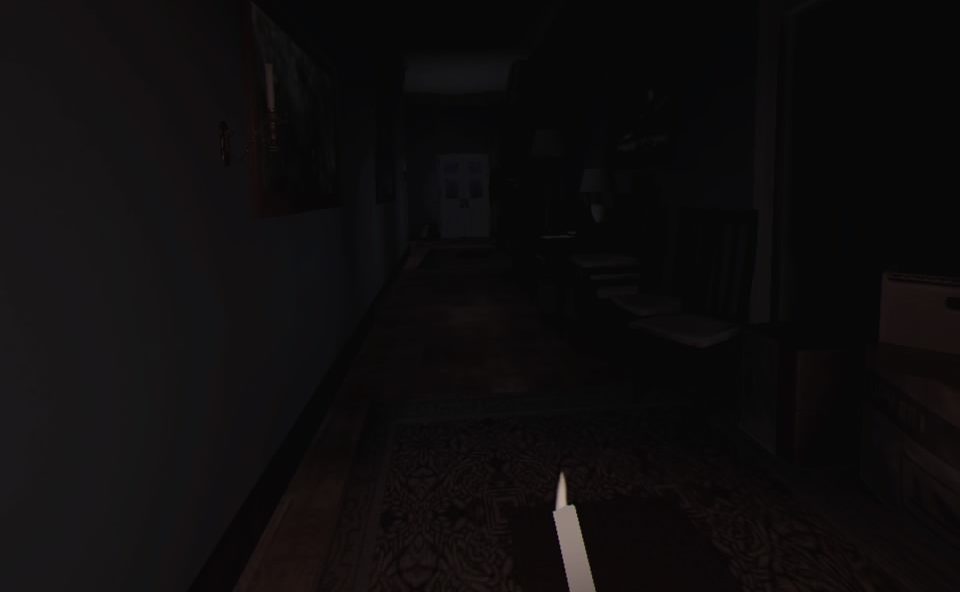 The house very dark, often only being lit by your candlelight, which lends itself well to the spooky atmosphere.

I think this may be the freakiest VR horror game I have ever played.  The atmosphere here is just eerie.  It’s worth noting that this is based on a movie of the same name (which I haven’t seen) though with none of the real-life actors present here, it feels like its own beast.  Jump scares have been a go to in horror VR since that genre came to be and unlike many of others in the genre, the team behind this one know what makes a good scare.  The creepy moments in this game are genuinely scary and, as the game progresses, I found myself looking over my shoulder on more than one occasion to make sure there was nothing behind me. A silhouette in a window, or a slowly opening door or the rattling on a nearby window; these are all tropes we have seen before, but in this they just seem to be executed a little more flawlessly.   All of this is aided by the audio, which sets the stage nicely.  If feels like you are “alone” in a very creepy house with creaking doors, rattling windows and slew of other audio effects that greatly add to the immersion.

Scares aside, there are some issues I did have with the game.  It’s a linear tale with doors only becoming unlocked as you progress through the game, up to a certain point anyways when the whole house becomes available to you.  This is expected, but hampers a personal connection with the game by being so streamlined.  If I saw a scary silhouette on the other side of a door, I just wouldn’t go in that door, but here, that’s your only option to progress the story.  This is balanced out by other in game scenes where you see your daughter in distress, forcing you to run back and see what happened to her and try to save her.  These situations felt much more organic and had the story flowing nicely.  It’s a creepy tale and the backstory is told through notes and articles scattered throughout the house, fleshing out the characters and the whatever is plaguing you and your daughter. 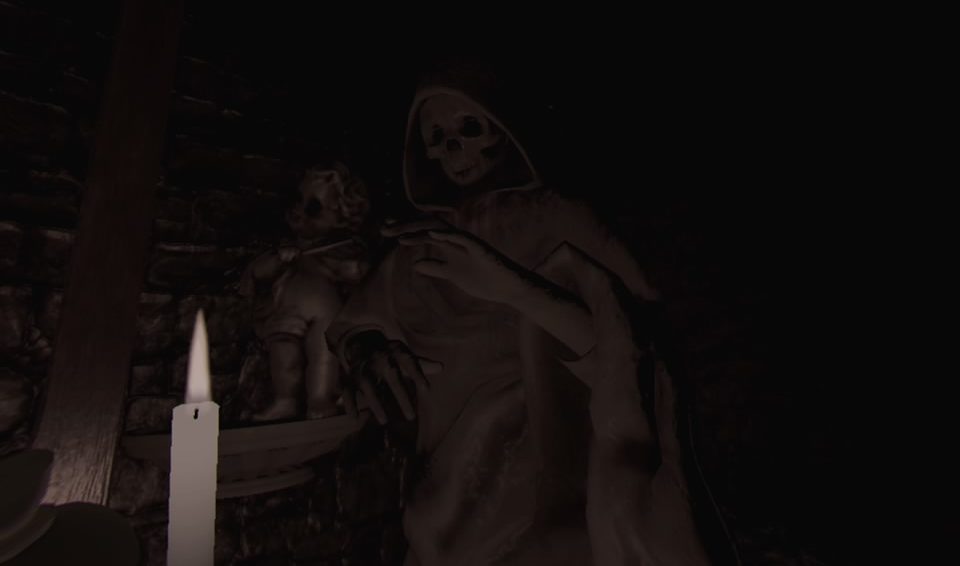 JEEBUS!?! If I had this kind of crap in my backyard, I’d never go there again!

Besides the controls and some of the visuals, I had a few other issues.  The first being that no matter what position I started the game or recalibrated when in the game, I was always to low to the ground.  Even when standing up, I still felt like I a 4 ft tall person.  There is an option to adjust this, which helped, but did not remedy this problem entirely.  The “puzzles” here are very easy offering little to no challenge.  Don’t know a code to get into a safe? Just travel to the next room, where the game tells you to go, and the solution just shows up thanks to a shiny ‘touch me’ mechanic that affects any story based items.  It’s not awful and does progress the story relatively fluidly, but I would have like a little more challenge.  Also, you pick up a cell phone in the first few moments of the game and the text messages you get on there confused the story, for me anyways, as I thought I was talking to my significant other and not my daughter for much of the story…once again though, that could be just me.

The campaign (playable in VR or not) took me around 3 hours to beat, though I suspect that may be on the higher side for many players.  Based on the trophies, it looks like there are 2 endings to the game, though I haven’t actually confirmed this.  Alongside the story are a host of items to interact with and while most really don’t offer anything other than a distraction, trophy hunters will be searching the house for everything they can touch.  I did like the story and was very satisfied with how it was told throughout my playthrough and, while it is very linear and sometimes confusing, I was still pleased with the conclusion. 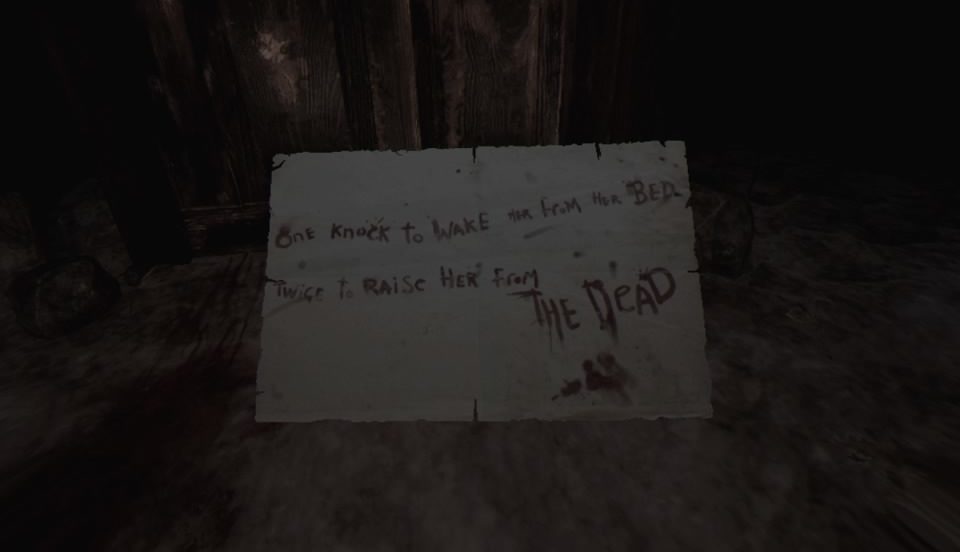 You’ll find notes throughout the game that fill in the backstory…or tell of your impending doom.

If you are in the market for scares, shortcomings aside, this is still probably your best bet to pee your pants just a little.  The creep factor is ramped up very high and I was on the edge of my seat through many moments of the game.  It is by no means perfect, but what’s presented here is some of the best scares I have had in VR.

What would I pay? $20 is an easy ask.  I wish the controls weren’t so clunky, but besides that most of my issues are rendered moot by the suspense and scarefest provided!  If you like being scared than you owe it to yourself to pick this up.

Wales Interactive provided theVRgrid.com with a review copy of this game and, regardless of this review, we thank them for that!