We have had a few wizard simulation type experiences in VR with Skyrim, Mages Tale and of course, The Wizards all being shining examples of bringing a little magic to our headsets.  Unlike those titles, Waltz of the Wizard is a much smaller experience more akin to job sim games with you messing around in your wizardly tower with just about anything you can find nearby. 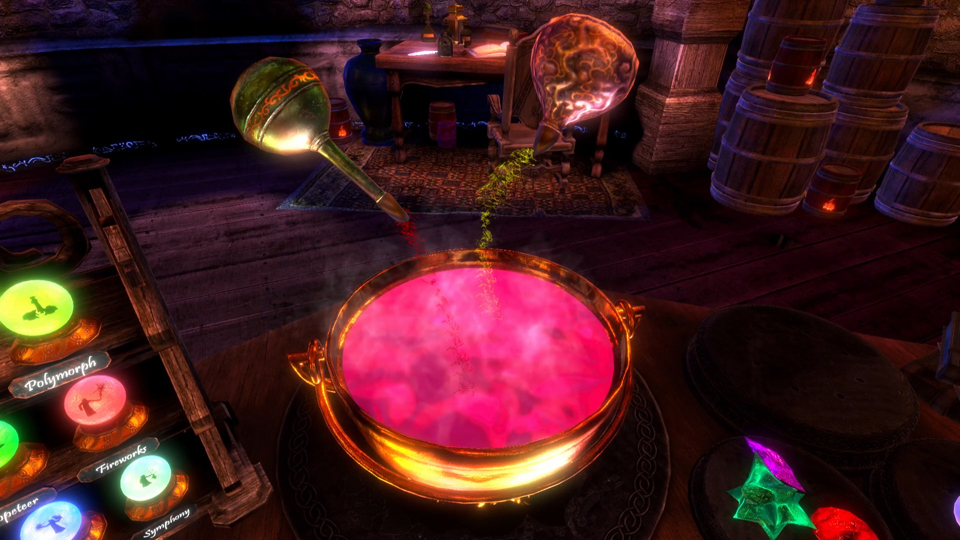 Like any simulation title, you are going to need a couple of tracked motion controllers as you’ll be grabbing and manipulating a bunch of stuff with your hands.  Starting off in your tower, a talking skull starts telling you what to do with cauldron and ingredients in front of you.  Basically grab and dump one of each type of ingredient into the pot to create a spell.  These range from a simple fireball spell, polymorph, a gravity spell and a bunch more.  Once you unlock a spell, you can mess around with the environment, blasting apart your wizardly tower and flinging just about everything about.  Besides the spell casting are some other items scattered around that beg to be messed with.  A xylophone nearby can transport you to a few different realms (more on that later) and thanks to a few locomotion options, including full loco, you can walk around the tower and start grabbing more stuff.  A bulk of this experience is just grabbing whatever you can and seeing what it does.  Pick up a nearby crossbow and targets appear that prompt you to shoot them.  See a potion that says ‘smaller’ on it?  Give it a swig and enjoy some Alice in Wonderland shenanigans.  A trophy case on the wall slowly fills up as you perform and discover everything hidden in the game and once it’s full, you have done everything you can, as far as I can tell.

Waltz of the Wizard looks surprisingly good, though given just how confined this games is, anything less would be disappointing for sure.  Your tower is littered with all manor of fantastic items from a very much alive suit of armor, explosive barrels, books, potions, a trumpet and so on and so forth.  Everything has a fair bit of detail allowing you to be immersed in this little world.  Besides the tower, you can also visit a few other areas thanks to your xylophone teleporter with snow globes scattered around the room indicating the proper notes needed to hit to transport you to these other realms. Of the few realms you visit, all but one are stationary affairs and lack almost any interaction save for viewing the happenings around you though they do offer their own very entertaining moments.  The stage that you must roam around in is the labyrinth, which is a rather small maze littered with traps and enemy knights with the end game being to activate 3 orbs to unlock a powerful magic item.   Magical effects are a wonder to behold, the different stages all look great and the attention to detail throughout the game had me enjoying being a powerful wizard. 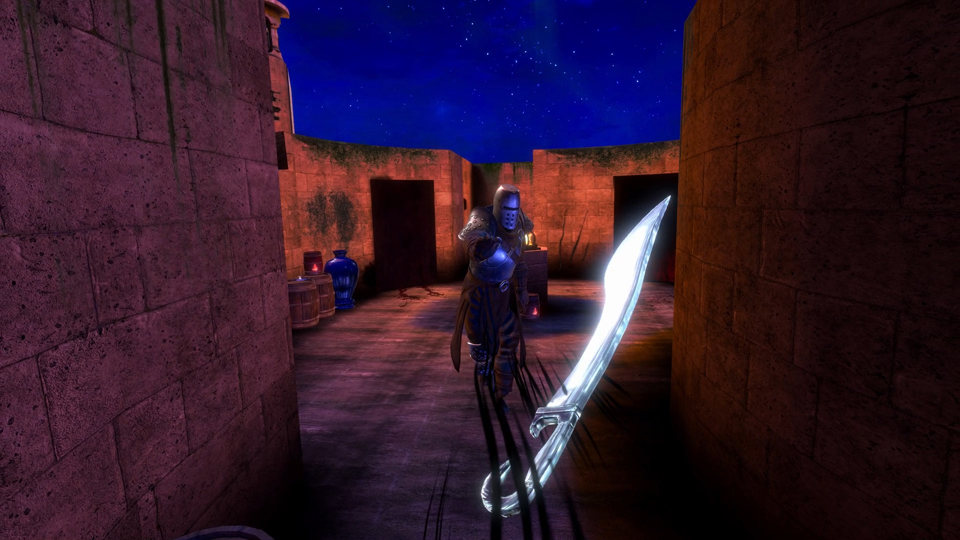 Don’t let these dudes suck the life out of you!

While in the tower, a talking skull guides your actions and bemoans any kind of messing around, chastising your efforts to do anything unwizardlike.  A large attention to detail was put toward the spells and their effects and while game be a smaller experience, it’s clear that the dev wanted to make sure it was memorable in every way that counts.

As fun as this is, a bulk of this experience is really just messing around.   In job simulator fashion, the enjoyment you’ll get out of this largely relies on your own imagination and I’m not saying that’s a bad thing, just something to be aware of.  Making all the spells and seeing what they do as well the lightsaber and crossbow stuff will kill some time, and trying to find all the secrets in the tower is initially a treat.  When I only had a few trophies left to get for my trophy shelf, it started to become a little frustrating as I wasn’t quite sure what to do to get them and was forced to read exactly what they were from the steam trophy list or go online to figure it out.  Not the biggest deal, but once you do all that and visit the other areas, there really isn’t much else to do, making this more of  a one-and-done type game.  Once again, not really a bad point per se, but something to consider.  I also ran into a couple of physics issues with items getting stuck in the environment but these never interfered with the game in any significant way. 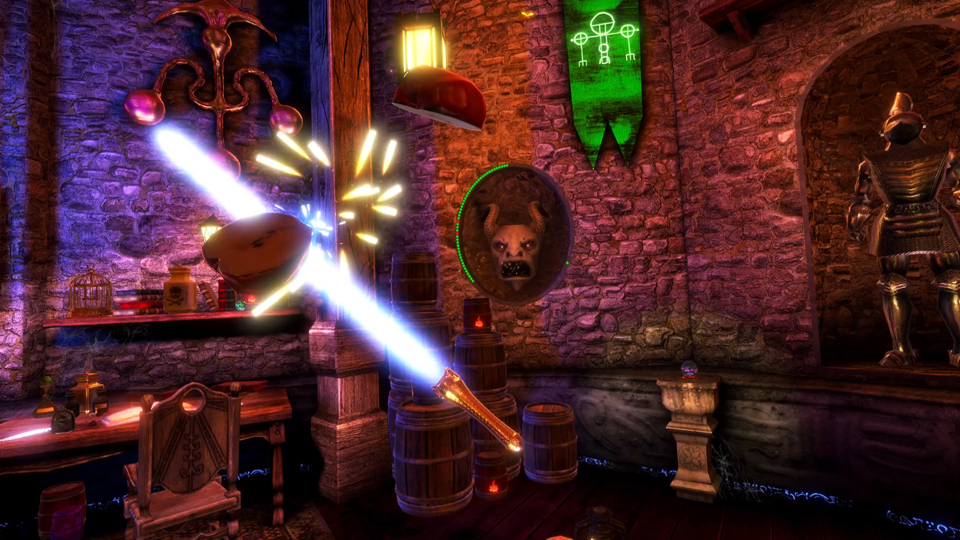 Yup, that’s a saber…made of light.

Waltz of the Wizard is an enjoyable little romp in VR but I do wish there was a bit more.  That’s not to say what’s here is at all shallow and I really did have fun discovering all the spells and secrets in the tower and the labyrinth section felt like a small taste of things to come.  If you like wielding spells and just messing around in a little VR playroom, then I say definitely pick this up.  It’s short and sweet and I bet you’ll be impressed by a few things in here.

What would I pay? $10 is an easy ask for this.  For that price I wasn’t expecting a ton and this delivered, in my opinion, a well thought out and refined, unique job sim title centered around the magical and fantastic.

Aldin Dynamics provided a press code for this title and, regardless of this review, we thank them for that!