Ever since the release of Jurassic Park, video games have tried to do their best to gamify that experience by tossing us on mysterious islands littered with homicidal dinosaurs.  Dinosaur Island VR puts you in the shoes of a mercenary tasked with finding a missing science team who crash landed on the island. 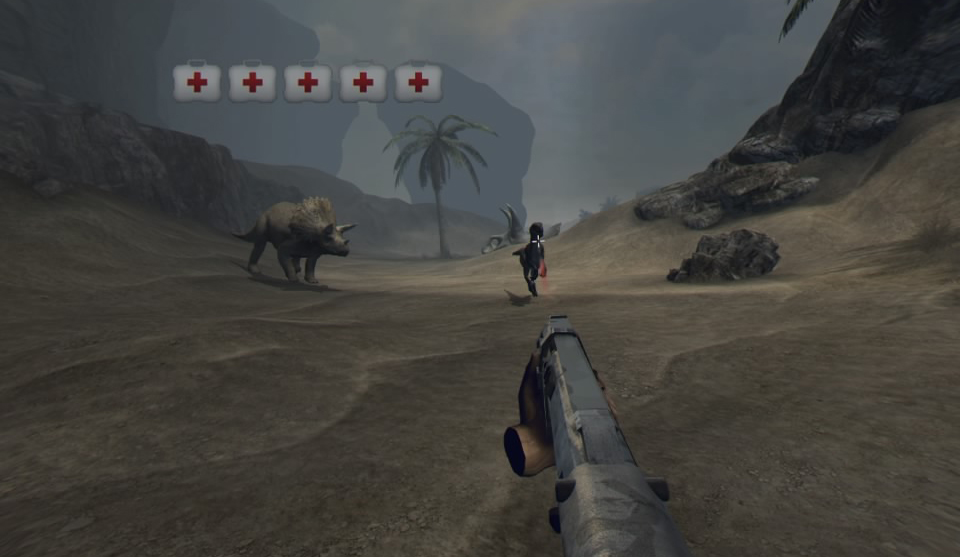 They’re coming right for us!

Despite what the trailer hints at the only game mechanic you control is the gun you carry with options for DS4, Aim or a single move controller ensuring anyone can pick this up and play it.  Each of the 5 stages is on the rails so you automatically move toward the objective as you dispatch the individual waves of dinosaurs that throw themselves in front of you.   The game also does away with manual reloading so the second you stop firing or trying to fire if you run out of ammo, you will automatically reload your weapon.   Each stage you beat scores you based upon how much life you have remaining as well as how many kills and double kills you got.  Once a stage is completed you unlock a new weapon, new stage and are introduced to the next dino type you may be facing along with its weak points and what to expect from their attacks.  The guns you unlock get steadily more powerful with the final assault rifle not requiring any reload at all but must stop being fired intermittently simulating a very fast cool down mechanic. 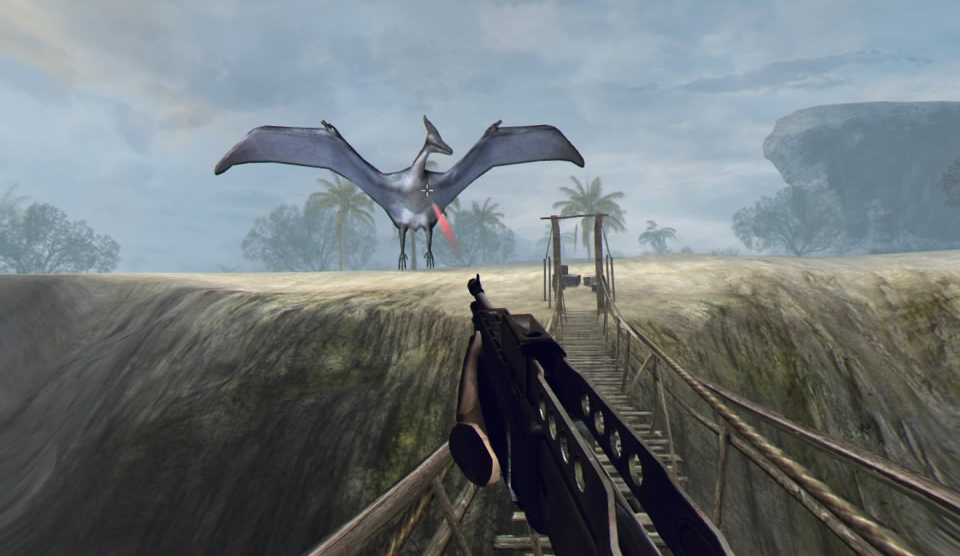 This was originally an Oculus Gear/Go game and it shows but by no means does this game looks bad, just more…lacklustre I’d say.  Textures on the ground are quite flat looking but the terrain surrounding you, cliff sides, hilltops and even a military complex all look surprisingly good with the dinosaurs even having some decent shadow effects applied to them making things look a tad more realistic.  This dinosaurs also animate well but really only run, jump or fly toward you, often times stopping to pose or perform some kind predetermined action like roaring or just announcing their presence which as it turns out is also just roaring.  The scale in this game is all over the place and based upon the visuals in VR I’d say the character you play is around 9 to 10 feet tall and carries guns still too large for his frame.  This is mostly noticeable in the 1st stage but once you focus on the size of the dinosaurs ahead of you, whether it’s a rampaging triceratops or T-Rex, you’ll realize that they seem to small. Each stage opens with a very brief cut scene showcasing the dinosaurs you’ll face in that stage as well as opening and closing cut scenes which are supposed to tell the story I mentioned earlier, but in truth are little more the briefest of explanations as to what may be happening. 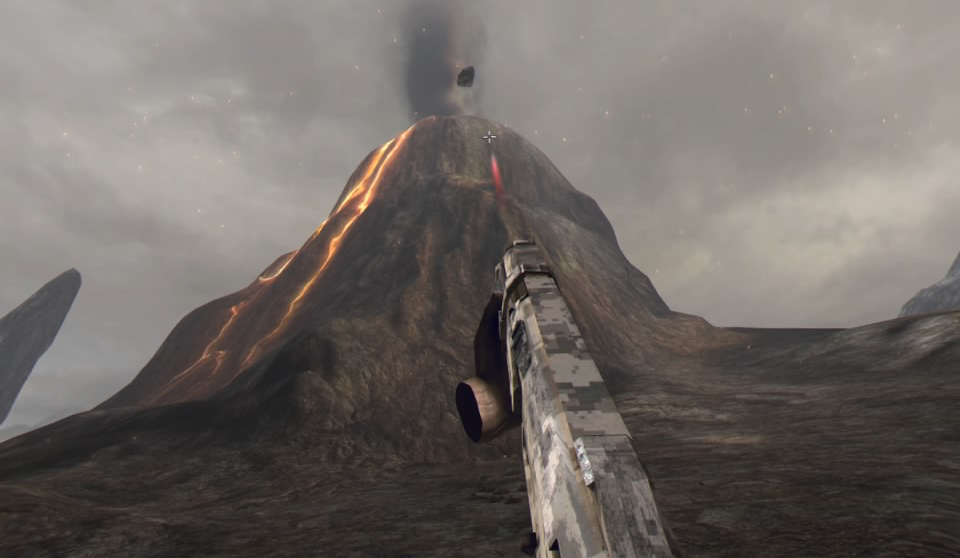 The music in here stands out as being high-paced and very cinematic.  Given just how bare-bones this game actually is, I was pleasantly surprised by the soundtrack.  Dinosaurs sound as they should but your guns sound incredibly muted and lack that ‘oomph’ you would expect from such large rifles.   3D audio is lacking as I often found it difficult to determine where dinosaurs may be coming from though by no means was that to detrimental as they more often then not spawn in front of you.

Dinosaur Island utilizes the 180 degree(ish) tracking afforded by the PSVR as enemies may appear at your sides unexpectedly and if you can’t shoot them fast enough, they will cause you to lose one of you 5 health points with no way to reclaim them.  Should you die, you must restart that mission from its onset but as each one only takes to 15 minutes to complete, that’s not too punishing and as the stages play identically every time you play, it’s fairly hard to be fooled twice by the game.  There a few boss-type battles with dino’s that take more then 1 or 2 hits, but these encounters rarely offer any more challenge then the regular ones thrown your way.  You receive points for double kills, but the game seems to have issues tracking that as you can’t get back to back kills unless there is a substantial pause between double kills and if you’re think triple kills are thing, in this universe, they aren’t making the entire point system in here a little pointless.   The weapons you unlock can only be used in that corresponding stage with no option to switch or cycle through them ensuring that there is no mixing up how any stage plays. 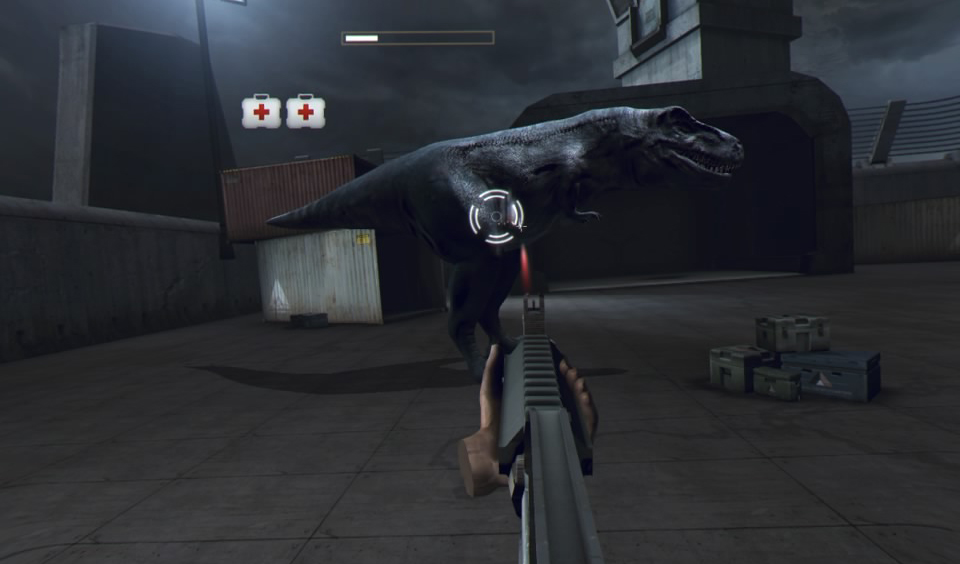 As it stands, Dinosaur Island delivers a budget wave shooter experience that never tries to do anything except have you shoot dinosaurs and if you are into that, you’ll probably pull some joy out of this. It’s absolutely nothing special and we have seen way better versions of this type of game before, but it works and supports the Aim controller.

What would I pay?  This is a lofty €15.99 and that’s nuts.  As much as I didn’t hate this game, I can’t recommend it for that price given what’s available for roughly the same.  Put that in the €7.99 price range and it’ll kill an hour in VR, but there is no reason to return to this as it’s just about as bare bones as these types of games come so you have been warned.

Lakento S.L. provided The VR Grid with a press code for this title and, regardless of this review, we thank them for that!