For those looking for a little more chill in their VR experiences, Winds and Leaves, originally released exclusively on the PSVR headset, looks to bring places you in the role of ‘The Gardener’.   You are not just any gardener though as you are the only being left alive that can bring life back to the world after some kind of calamity has rid it of almost all it’s vegetation.  It’s up to you to explore, uncover secrets, and learn new techniques to restore the landscape to its former beauty. 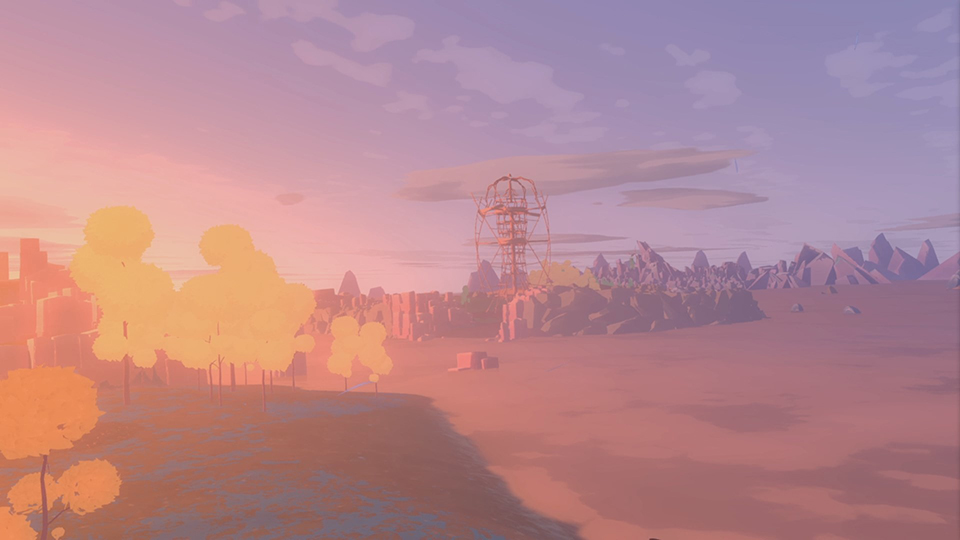 It’s all about restoring the windmill in the center of this world.

You’ll have 2 hands grab at the (sort of) wooden stilt carriage contraption you sit in that allows you to traverse the landscape much faster than using your own 2 feet thanks to being able to raise and lower the height of your stilt legs.  The introductory moments in the game explain the core mechanics, and with a little trial and error you’ll soon be off, planting seeds and expanding your forests across the landscape.  Movement is handled in a unique, but sometimes cumbersome manor in that each of your mech’s legs are connected to handles so too walk you need to move them back and forth as if you were holding 2 massive levers.  That actually works better than it sounds with a few comfort options at play that allow you to smooth, click or drag & turn to face the direction you want too.  Mounted on your stilt-walker are 3 items you’ll need to grow the plant life; a stick that punches the ground below you and creates a hole for the seed, a pouch containing the different seeds found in the game and a device which let’s you accelerate time by grabbing it and turning it on its side, allowing for those little seedlings to sprout into trees.  Where things get tricky is that certain seeds only thrive in certain soil types with some being discovered during the campaign with others having to be made by combining different seed types, creating new hybrids.  Expanding your forests will require more than just planting seeds, leading me to your 4th item, a sort of wooden Mug that contains the essence of the life around you.  When not walking on the greenery, that essence is used up and should you not make it to the next patch of green before it’s consumed, you effectively die and are sent back to your last checkpoint tree.  Those trees replenish your tree juice but in order for them to be active, you need to have your forests touch them and therein lies the overall game loop as you need to expand your forests where you can but must travel across the wastes which could potentially kill you.  Later in the game, you’ll also have to contend with weather that could kill your saplings as well as a grapple mechanic that allows you to fly to newer areas. 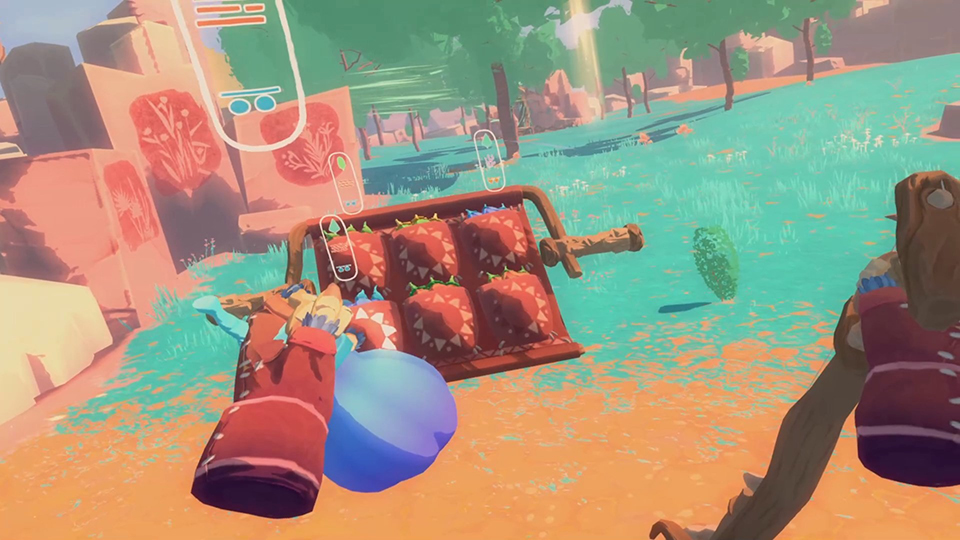 Pick a seed and plant it…just make sure it’s the right species.

Winds and Leaves is a striking game thanks to the rather simple and very striking cartoonish art style used. This is an open-world title so if you see it, you can walk (or fly) there though natural barriers like cliff sides and a windy, dusty desert in between islands limits just how far you can actually travel.  The world can look quite drab at times though that is by design as your forests add a ton a vibrance to the desolation, turning the ground green and rife with foliage while trees grow to huge lengths and when you revert a large section of land, it turns into a full-blown, lush forest.  While pop-in still pops up on the PC version, compared to the PS version, it’s been reduced to a point where unless I was really looking for it, I never really noticed it, allowing me to enjoy the world a little but more, especially when you factor in the huge increase in screen resolution & clarity over the PSVR headset.  Once the world loads in, you’ll never see another loading screen (unless you die) making an overall experience that feels very streamlined.  Ancient wooden structures are scattered around the landscape with some being quite small while others are massive and may even need to be climbed to unlock the next section of the game.  By far, the best effect in the game is your ability to fast forward time which, when activated. has the sun and moon rising and falling while clouds blast on by and weather patterns shift around the map.  Watching your forest grow is always a treat and an effect that never really got old to me as it was always cool to just see the world transform before my eyes though the trees also follow the same growth patterns, so walking through my older forests, I noticed just how similar each tree looked.  The world is a series of islands, big and small, and separating those lands is a sandstorm that washes away all colors and is a desolate waste that saps the life out of anything in it, creating a wonderful counter to the beauty that lies outside of it.  It may lack in the finer details, but the overall package, sense of scale and impressive draw distance had me enjoying diving back into to this strange little world. 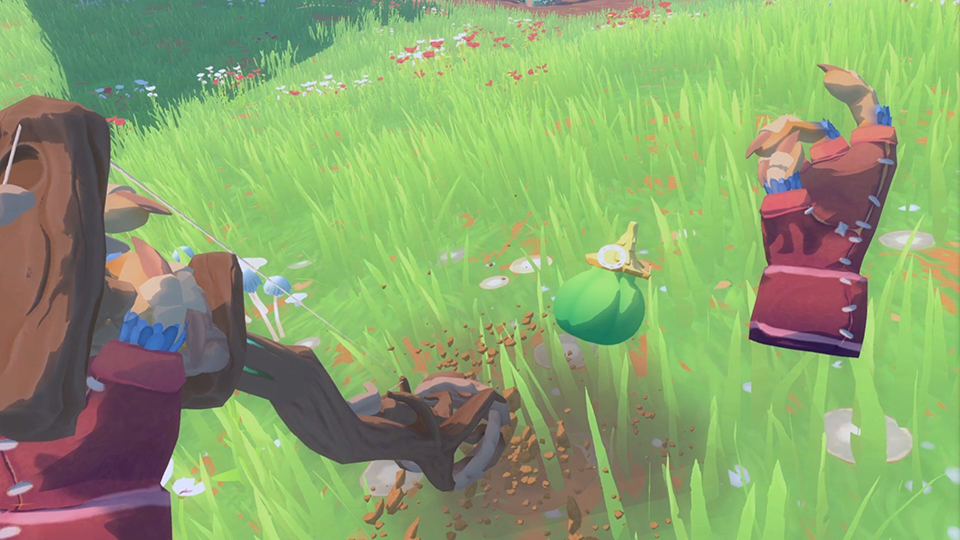 Growing a forest one seed at a time is very satisfying!

While the visuals may be lacking in some departments, the audio design is on point offering a super chill and near therapeutic experience.  Some very light and effective fanciful music will kick in at pivotal points when you make some significant advancements, but for the most part it’s all about the sounds of nature.  Trees rustle in the breeze, rivers flow and your wooden footsteps crunch the ground below them making for a very personal experience.  Walking into the blight changes everything your exposed to as not only can you barely see outside of it, but all you can hear is the gusting of the dust while your energy slowly depletes and the pulsating music that plays only adds to that intensity.  It’s a beautiful game with equally beautiful sound design that amplifies the overall experience. 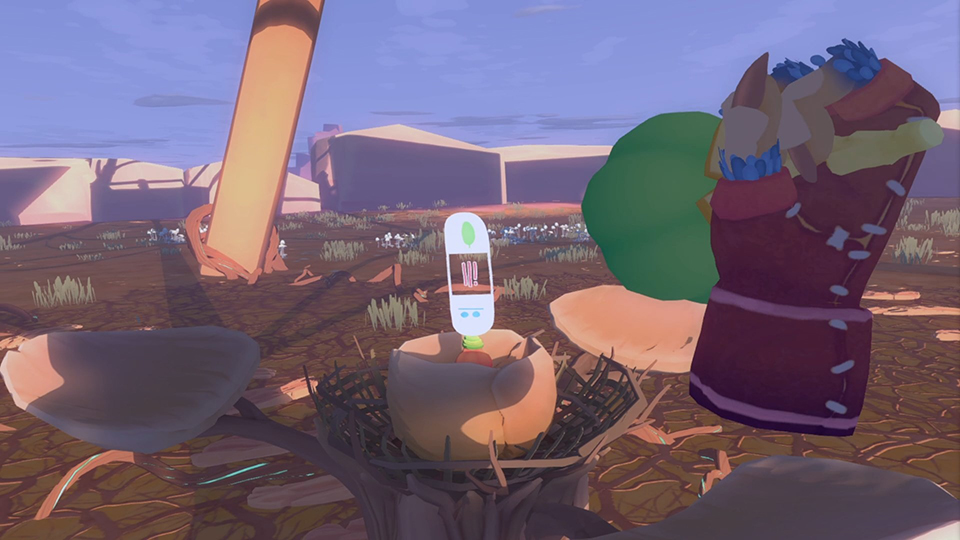 Planting seeds here will help unlock the next area to explore.

Winds & Leaves is a game based largely upon repetition as you’ll be harvesting seeds by either picking them off the ground or off the trees themselves and while it’s easier to go for the low hanging fruit, you’ll have to climb many to gather the ones out of reach.  Expanding your forests will take time as you plant and pass time and plant and pass time, trying to reach the next tree that will recharge your energy for long trips across corrupted land.  While the walking mechanic wants you to move your handles like levers, I ended up keeping them near me and moving them like a pair of maracas and while that may sound less immersive, it still works surprisingly well and never annoyed me.  Later in the game, the ability to glide is unlocked that also allows you to travel to new areas and navigate around the world much faster, though this is node based and does not allow you to fly freely but was welcome nonetheless.  Each seed is marked by 3 symbols indicating its genome and when planting seeds, the game displays which species will grow in that ground making it very easy to see if you have the right seeds or what seeds you may need to plant to create the hybrid.  All the games instructions are told via cave paintings from the worlds past inhabitants so pay attention to them as they often tell you how to bypass the next obstacle.  The auto-save function worked great in my play with death just bringing me back to the nearest safe land without any lost progress.  Overall, the PC version of the game is the superior version, offering a smoother experience than its PS counterpart and really utilizes the extra power of the computer to deliver a fantastic VR title. 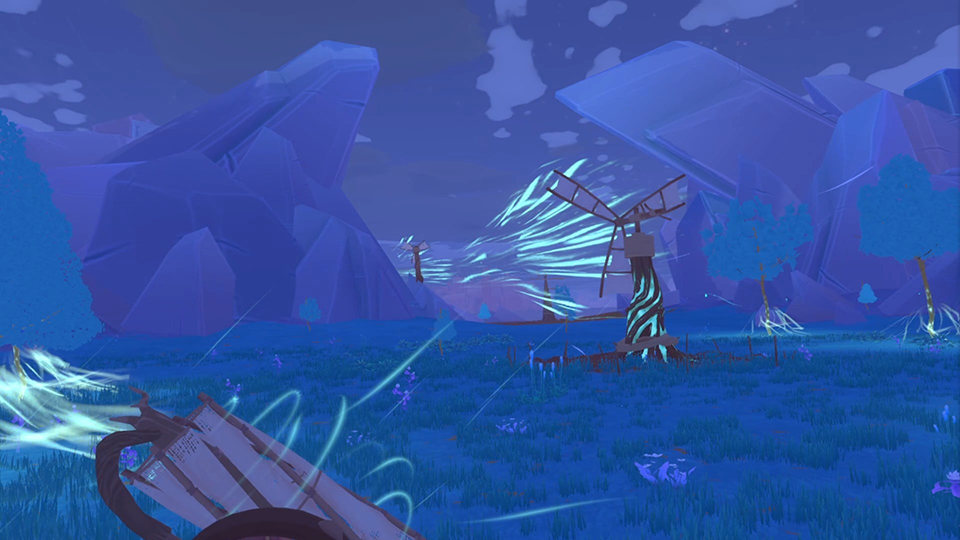 Speeding up time never get sold.

Winds & Leaves is oddly addicting thanks to its expansion mechanics which makes every tree planted feel like progress, and as such there’s a constant sense of accomplishment as I slowly turned the world from a blight to a paradise.  We have seen a few flora building games in VR, but for myself, this is easily the most satisfying one I have ever played and those looking for a slightly more chill experience should not look past this one as it’s a fantastic and unique title.

What would I pay?  The PC version is a much more seamless experience than its console counterpart with many of my issues from the console version being remedied, making this easily worth the asking price of $30 US.  With an 8-hour campaign and a very rewarding game loop, this is one of the most satisfying games I have ever played!

Trebuchet provided The VR Grid with a press code for this title and, regardless of this review, we thank them for that!