Wolfenstein is a franchise that has been around for a long, long time hearkening back to the early days of first-person shooters.  Numerous sequels and reboots have graced many a gaming system and now we have the next evolution in the series in Cyberpilot.  It’s 1980 and those dastardly Nazi’s are in control of most of the world.  You, a hacker, have been recruited by the resistance to help fight against the Nazi horde in a way no other Wolfenstein game has done before. 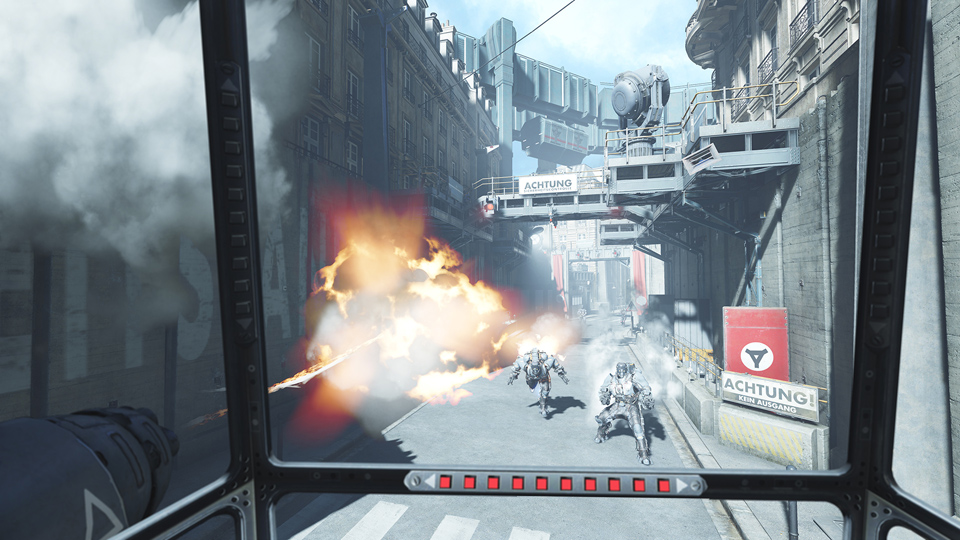 Moves or DS4 are supported here with motion controller being the only option on the PC side of things.  Typical of most 1st person titles, each motion controller acts as one of your hands and you need to grab and manipulate objects around you before you get to the action.  After messing around with a crowbar and hacking a Panzerhund (a large fire breathing robot dog) you head to the control deck and begin the core of this game, which is controlling 3 co-opted enemy machines and unleashing all hell back at the machine’s former owners.  Thumbsticks or Move buttons allow you to walk forward and backwards with steering managed by tilting 1 your controllers to the left and right while the other is used to aim at your targets.  The DS4 can be used, locking your hands in place and using the thumsticks to move, with controller tracking used to aim and move your hands around, making for an easier time in the mechs, but awkward during those moments when you need to grab and manipulate stuff.  From here, depending upon which robot you are using you can use a few attacks or special abilities like a shockwave or shield to aid you in our efforts.  The 1st and last robots you get to pilot control relatively the same, but the 2nd one, a small drone, utilizes some fun flight mechanics in some pseudo stealth missions and is a nice mix up to the relatively mindless action.  You’ll navigate Nazi controlled France taking down specific targets in an effort to get to the Nazi headquarters.  In between each mission are some mini stages that require to mess around with objects, performing menial tasks to push the plot along. 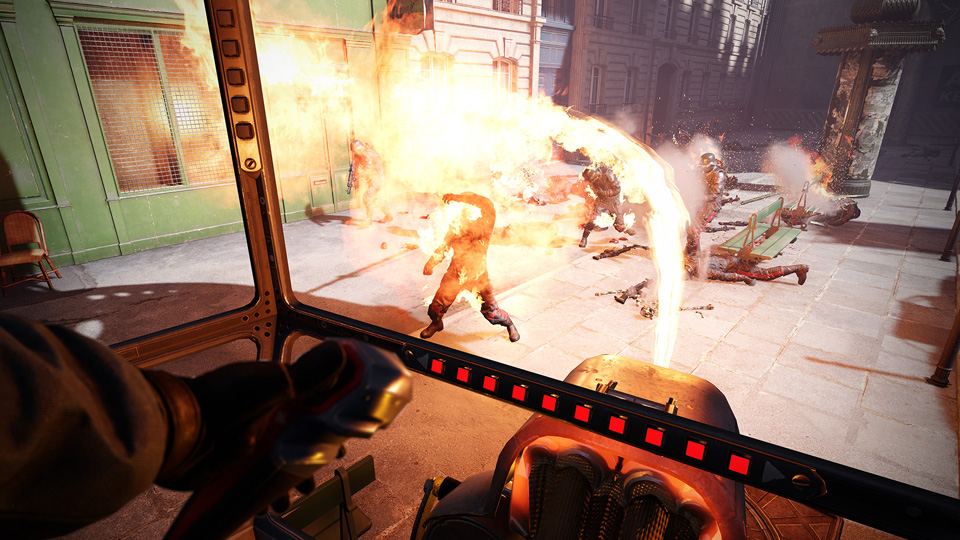 Cyberpilot, above anything else, looks really good in the headset.  There is a slight fuzziness to everything, but its clear extra efforts went into the presentation ensuring it’s one of the better-looking VR titles in recent memory.  The city streets, buildings and underground levels all look great and enemies looking equally impressive.  Getting close reveals a high level of detail on your foes and while the same can’t quite be said for the environments, as you are controlling a robot from a video vantage point, you never really get to scrutinize the visuals to close, save for the drone mission, and even still, everything holds up rather well.  The environments are fairly static, save for the enemies that may appear from behind closed doors or from drop ships, but the background sky is littered with Zeppelins and choppers and a general activity that breathes life into this world.   Some of the physics at play are beautiful as vehicles explode or you launch them across the stage with a successful ram.  In the stages in between mech rides, when you are stuck in a tower, the visual detail pops, especially when you get an up close look at the death machines, though you can’t navigate in these sections as you are stuck to a chair but you can move up down through 4 different floors.

Throughout your little adventure you are in contact with a French accented female resistance fighter who helps you out at almost every junction.  Before you take control of a mech, she takes you through a brief holographic tutorial explaining each robots’ abilities and in general pushes the entire plot along as, once again, you are stuck in a chair.  Weapons and other audio effects are top quality, ripped right from the most recent Wolfenstein game I’m guessing, and just like those titles, the overall presentation here is solid. 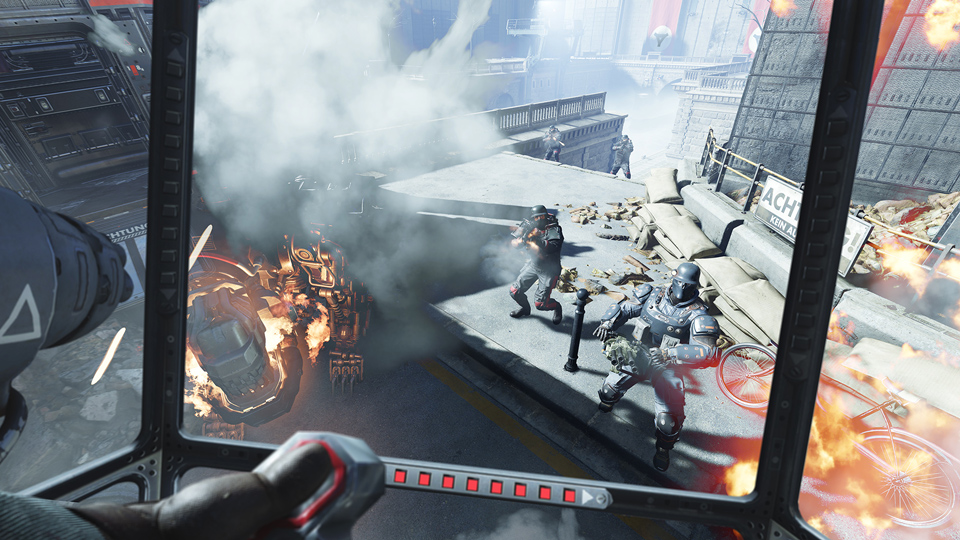 There’s a fun sense of scale used in this game!

For everything Cyberpilot gets right though, it’s not without its fair share of issues.   On normal difficulty, the campaign can be breezed through in roughly 2 hours and is really easy as long as you are a little careful.  Enemies are bullet sponges and as you progress through the campaign, you’ll meet larger foes that take even more damage before they disposed of.  They are dumb, behaving in simple patterns, typically standing right in front of you or walking toward you slowly with little regard for their own health.  As such, even on the hard and challenge modes, the enemies are easily exploitable and with a little patience, you can get through with ease.  A fourth act twist was a nice surprise but the game itself ends on a bit of a whimper with a hint that their may be more to come, but who knows.  You also can’t revisit a stage, but can only continue from the last point you left off and if you do decide to play a 2nd time, you still have to play through all the tutorial bits with no option to skip past them.  For all the praise I give the visuals, they aren’t perfect, largely due to the lack of interactivity in most of the game, while lamp posts, gates and cars can be obliterated, everything else, like surrounding buildings, piles of garbage, statues and so on are static, so whether you fill em’ full of lead, ram them or light them aflame, they never show any damage. 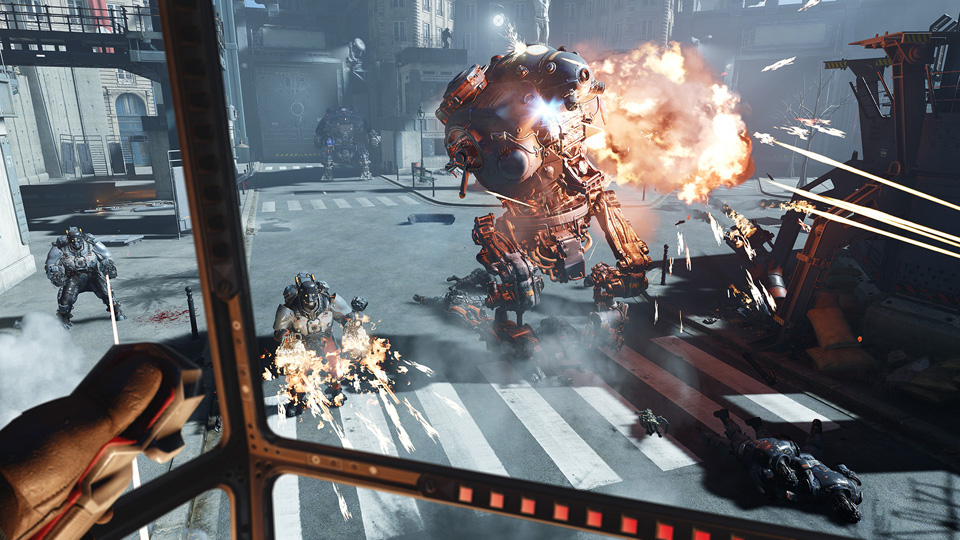 Even when the action gets intense, you are more then capable of dolling out the punishment.

Wolfenstein: Cyberpilot boils down to a very pretty, very shallow shooter that may be underwhelming to VR veterans, especially those familiar with the games before this one, which offer a ton more challenge and depth.  Except for the change in difficulty, there is no reason to replay the game as it is the exact same experience in every go.  Due to that fact, and everything else I mentioned, Cyberpilot makes for a way better show piece for newcomers to VR more then anything else.  Wolfenstein’s 1st VR efforts deserve praise for it’s excellent visual translation to VR, but the shallow gameplay and short campaign left me feeling wanting.

What would I pay? $20 isn’t a crazy ask for this, but like I said, when I was done, I felt like what was here wasn’t quite enough.  I enjoyed the story and the game had some highlight action moments, but for those expecting a first-person Wolfenstein classic, you may be a little disappointed by this robot controlling adventure.

Bethesda Softworks provided The VR Grid with a press code for this title and, regardless of this review, we thank them for that!