Orb Labs, Inc is a sci-fi adventure game with slight puzzle elements. In the catacombs of some secretive corporation, filled with deadly lasers, you’re tasked with uncovering its unethical secrets. This game knows what it’s trying to do, but feels progressively less enjoyable with every step. I admire the unique concepts in this game, but its movement system- a fundamental aspect of its gameplay- often ruined my experience. 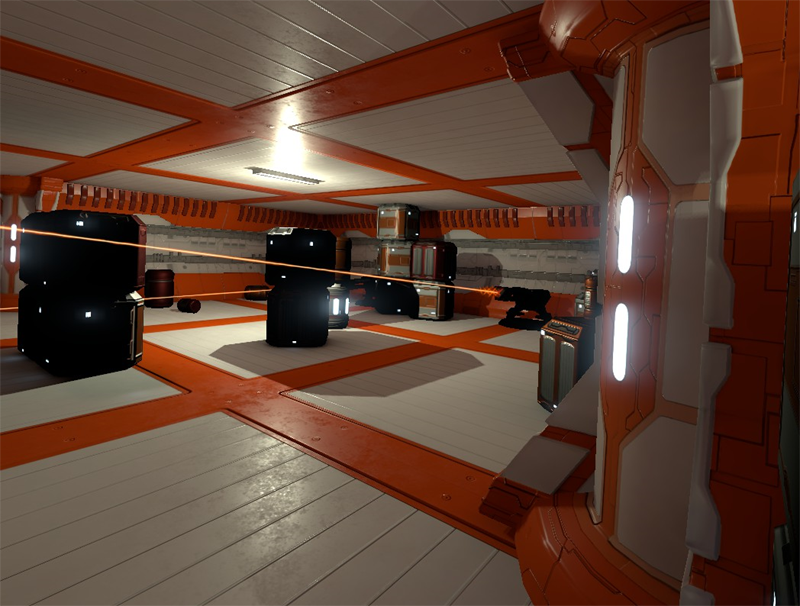 Throw a ball behind cover to dodge the laser. Leave the room. Rinse and repeat.

The gameplay of Orb Labs, Inc is based almost entirely on throwing orbs, a significant amount used mainly to navigate the environment. This game is the result of two concepts, unique to VR games- throwing and teleportation- coming together in a creative way that is ultimately much less intuitive than the sum of its parts. Throughout the environment, the player finds small blue orbs which can be thrown and teleported to. Thankfully, picking them up doesn’t require you bend down. Your gloves can be used to pull orbs directly back into your hand, and you also receive gauntlets that can hold several orbs in storage. It’s a relief that obtaining orbs is a streamlined process, but this still doesn’t make it much more enjoyable.

Seeing as there is no free locomotion in Orb Labs, Inc, throwing teleportation orbs is your only way to navigate the environment. Since you must physically throw orbs, and not simply aim somewhere to teleport, this is a challenging mechanic that makes you get active. In theory, I can appreciate the concept of a physically-active locomotion method. In practice, however, this is extremely irritating. Most of the game’s experience boils down to endlessly throwing balls at the ground, over and over again. Sure, this is technically the game’s main gimmick, but it renders Orb Labs, Inc among the most tedious and unentertaining VR games I’ve played in a while.

There are other orbs, collectible from semi-hidden chests. Albeit a primary gameplay feature for succeeding at certain challenges, they only give a slight edge to the player: such as pop-up shields, laser-lures, and more. Even when certain orbs yield interesting solutions, these moments are bogged down by the constant necessity of throwing orbs to teleport. This game’s store page naturally boasts about “cybersickness-free movement,” but a significant amount of gameplay feels based around this goal. Personally, I don’t even get motion sickness, adding insult to injury and making this game’s movement system even more tiresome. For a vast majority of the experience- regardless of the specific context and challenge at hand- repeatedly throwing teleportation orbs at the ground makes up most of the gameplay.. 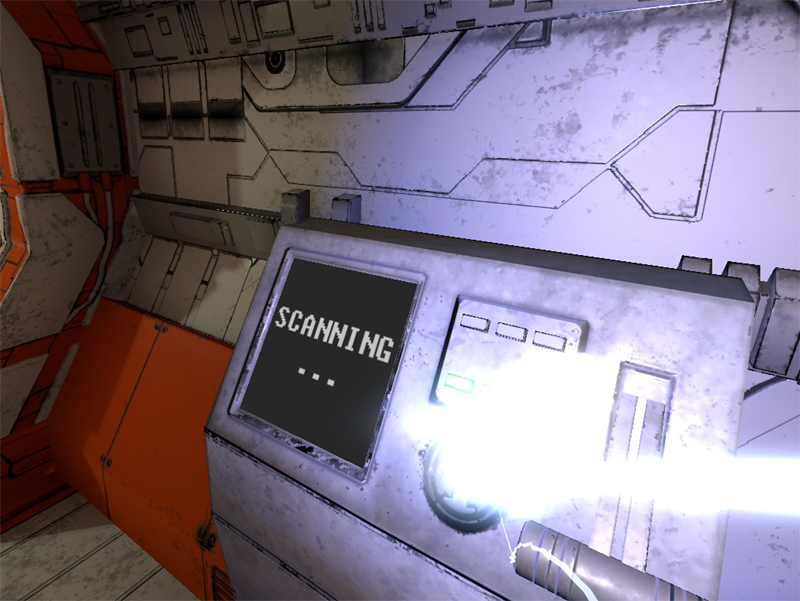 Most games would save at checkpoints automatically. This game blinds you with flashing lights in the process.

The most frustrating thing about this locomotion method is just how badly the physics actually handle. Throwing orbs often sends them flying in unintended directions, and it’s difficult to throw them with enough force to get a satisfying teleportation distance. It feels like there’s a maximum distance they can be thrown, rarely travelling anywhere near as far as you’d hope. Although orbs feel relatively similar to baseballs, their weight seems to be more akin to medicine balls. You must use excessive force to throw them, and this leads to some big problems.

Firstly, this game is an extremely intense workout for no good reason. You’re constantly throwing balls as hard as you can, and since the game’s whole environment is structured like a maze, simply navigating it feels like a massive waste of time and energy. Additionally, this game is a major liability in regard to your available room space. Even after 80+ hours played in Gorn, I’ve never broken anything in my room playing VR. After just half an hour of playing Orb Labs, Inc, it finally happened. I accidentally smashed a light bulb in my room, sending broken glass everywhere. I’m usually very cautious in VR, and nothing exciting or combat-related was even happening in-game when this happened. I was simply trying to explore the environment. Even if I’m partly to blame for this incident, it’s ridiculous that the risk involved comes from the game’s basic system of movement. Every single time I want to teleport in this game, I get paranoid and check to make sure I’m not about to hit anything. Generally, this anxiety is normal for VR games, but not when the only challenge in mind is movement. When compared to locomotion that risks triggering motion sickness in players, this game’s movement system is the greater of two evils. 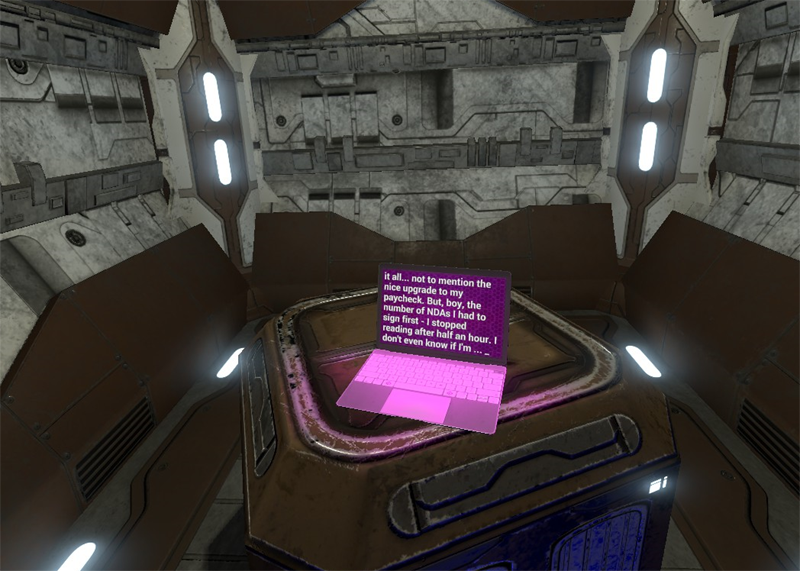 If it weren’t for these, the game could easily get away with having no story at all.

It’s ridiculous that the most difficult part of this game is getting used to its locomotion system, since that’s not intended to be its main challenge. Throughout the laboratory, the player will have to evade an army of security turrets that blast lasers. Some sweep the room in a repetitive pattern, and some auto-aim towards the player, who must avoid being in their line of sight. Touching a laser results in instant death, which is an appropriate challenge.  It doesn’t help, however, that most of these turret-dodging sequences stand out from each other. The solutions may vary, but the overall situation does not. Some rooms have more turrets than others, and some have them stationed in especially-inconvenient locations. Nothing really changes throughout the game’s challenges other than my closeness to rage-quitting. Orb Labs, Inc never fully reaches its potential for puzzles, either. While dodging lasers sometimes requires creativity, requiring a variety of different orbs, it overall isn’t much a puzzle game. A significant amount of your moment-to-moment gameplay is throwing orbs as fast as possible in order to avoid lasers. Even when challenges require some thought, the throwing-based locomotion makes the game feel monotonous and tiresome 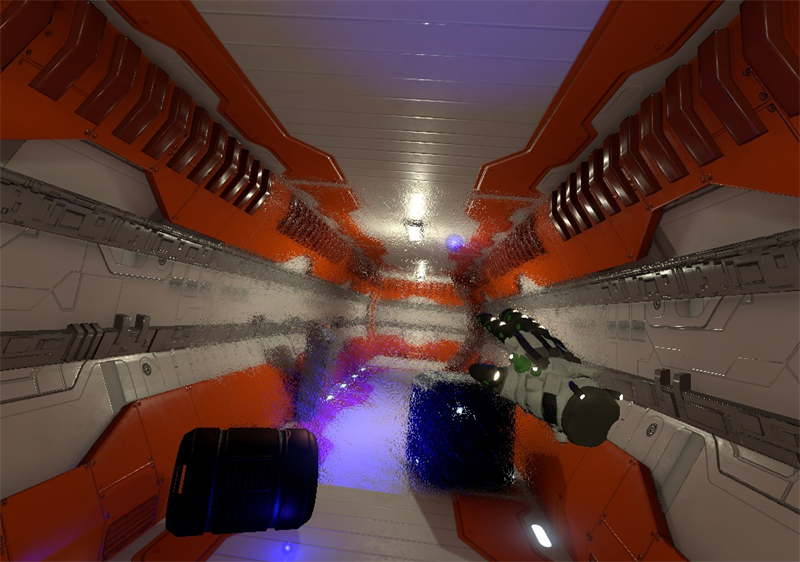 This is only worsened by the game’s monotonous environmental design. Every room texture is marked by the generic Unity-based sci-fi “industrial” theme, with very low variation in color schemes or even room layout. These maps are so bland and repetitive that they only add to how much of a chore the game is even though the graphics themselves are decent.

Orb Labs, Inc has a relatively hefty five-hour campaign, with an additional challenge mode. This is an exceptional content value, if you enjoy endlessly throwing orbs at the ground. Between lackluster environmental design and repetitive gameplay, such content value is not the game’s saving grace. I kept begging for mercy, pleading that the game finally end. Having several hours of gameplay only makes Orb Labs, Inc feel like more of a hassle.

The game’s story takes a back-seat to the gameplay and doesn’t stand to benefit the experience either. At completely random moments, a floating tablet spawns in front of you. The text on this screen feels conflicted on its own identity, as it isn’t clear whether this is a side-character trying to talk to you, or if it’s the game trying to give you hints.  Most actual details of the story can be found on laptops throughout the environment, written from the perspective of an employee. The story seems to chase its own tail, running in a circle and never actually leading anywhere. The only thing I learned is that these labs are running some pretty immoral experiments, in a crushingly generic “corrupt, shadowy sci-fi corporation” theme. This game clearly looks up to titles such as Portal for its narrative, but its own story is uninteresting and completely forgettable.

What would I pay for it?  Orb Labs, Inc. is a boring and exhausting experience, with gameplay relying almost entirely on an overly physical form of locomotion. In concept, I admire the gimmick that it’s going for. In execution, however, all novelty in the experience is built off of its worst aspects. Never before has a game this monotonous resulted in this much room-destruction and physical exhaustion. The game never redeems itself in any way, and there wasn’t a single point where I found myself enjoying it. If the idea of repeatedly throwing balls for five hours sounds fun to you, you’ll love Orb Labs, Inc. Otherwise, I wouldn’t recommend paying anything for this game.

Next Friday Interactive provided The VR Grid with a review code for this title and, regardless of this review, we thank them for that!