Strap on those retro boots and take a trip back to the 80’s in this hybrid wave and bullet hell shooter that is sure to keep you on your toes or mow you down in with a ridiculous amount of blaster fire.  The plot is simple, Alwyn, an 80’s raised nerd who frequented arcades and dominated the games in them, steals a virtual reality unit was that shipped there and created his own virtual world and it’s up to you venture into his creation to take him down! 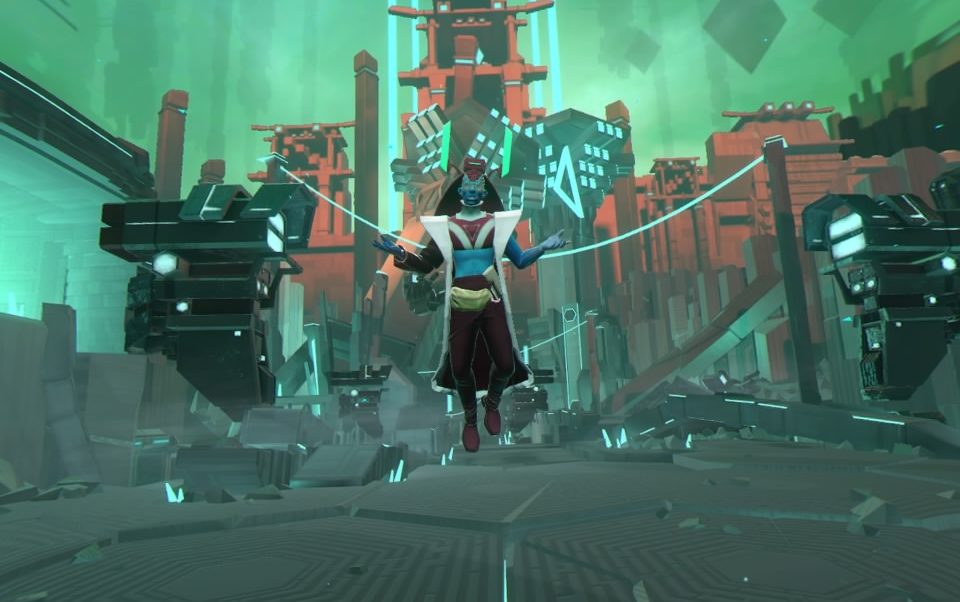 Blasters, on the surface, plays like a typical wave shooter.  You are stationary, minus your actual physical space, and must shoot at wave after wave of enemies as they come at you from high and low.  It’s Move controllers only here, 1 holding a gun, while the other holds a shield that can’t take too many hits.  What’s not so typical about Blasters is that each enemy can fires a ton of bullets your way and it’s up to dodge or block them lest you lose one of your 5 hearts.  Only your head can be struck so dodging blasts is really easy to do at the games onset.  It doesn’t take too long for things to get hectic as enemies come at you from high, low, near and far away and that’s when things get a bit chaotic.  Bullets typically move very slow, making them easy to avoid, but when they come from multiple directions, and you are focused on taking out one troublesome baddie who just keeps dodging your shots, it can get crazy hard.

To help you is a variety of guns and loadout options, how many you ask?  130,000 according to the dev.  I haven’t actually counted myself though with the amount of customization options available, I believe it.  You can pick a base gun, choose your bullets, targeting options, special abilities and a host of other guns to make your weapon feel like your own and that’s just your gun.  Your shield can also be swapped out for a variety of different types that all do different things.   A series of targets are available to test out your combinations to see what works for you and what doesn’t.  I made the mistake of picking a slower, more powerful shot that I couldn’t hit the broad side of a barn with and stuck with it way longer than I should have.  Bottom line is play around and see what feels best.  Special abilities include slo-mo mode, rapid fire, a laser and whole bunch more so while you may fall in love one, mess around with the rest as each change up the way the game plays.  To unlock all the loadout options though, you are going to have to play quite a bit, but every time you finish a level and see a new item unlocked is motivation to dive back into the game. 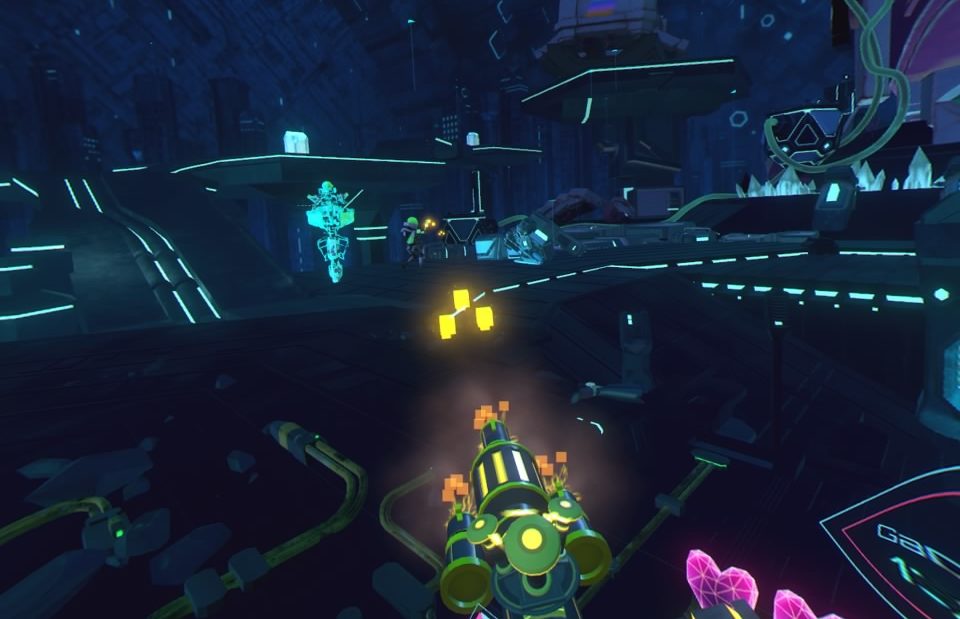 Finding the right loadout is half the battle, the other half is killing these fools!

The look and style here is right out of the 80’s.  Alwyn is one of the nerdiest looking villains I have ever seen, but the virtual world he has created is anything but.  There are only 4 stages available and each carries its own look.  It’s all very 80’s sci-fi inspired but works great with the stages having a large looking scale.  The enemies before you are all abominations; some are floating heads, or weird triangular armored behemoths or soldiers with robotic bodies and those same creepy heads.  Variety is the spice of life and the enemies that Blasters throws at you always had me wondering what is coming next.  Each of the stages bosses are much larger and look extra messed up, reminding of the classic bullet hell game Smash TV and upon defeat, when they explode, their pieces fly all around you making for some sweet VR moments.

I just praised the soundtrack in CubeWorks for its retro electronic style and that same music is here and fits the game wonderfully.  While the music is stellar, the star of the show is Alwyn, who has clearly been stuck in VR a little too long.  This guy just insults you the whole game with the lamest 80’s cliché jokes I heard in a long time, eschewing the fact that this guy is still a giant nerd.  He’s arrogant, cocky and terrible with one-liners, but carries a sense of pathetic charm that I enjoyed throughout my play.  Sound effects are also up to snuff and fit the action nicely with lasers, projectiles and enemies all making sounds that fit the action. 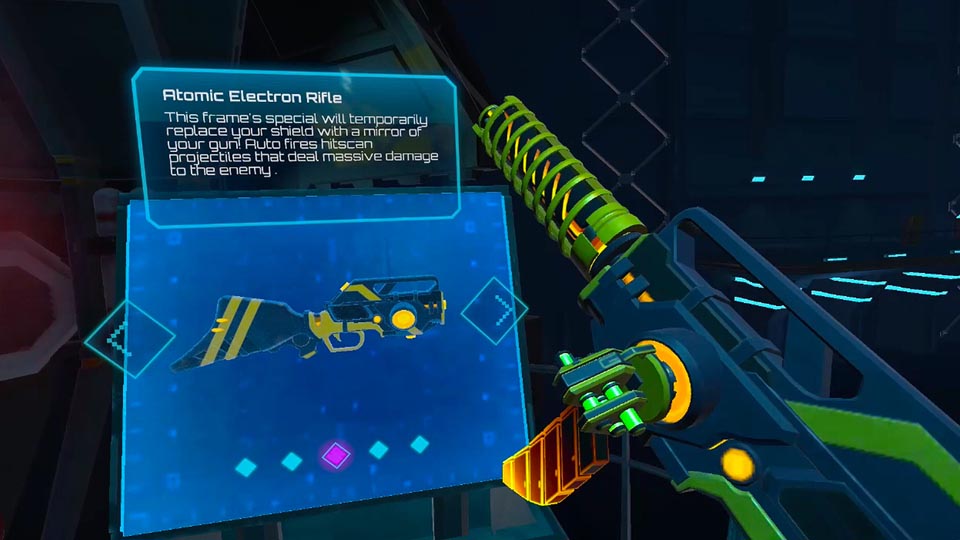 So many weapons and mods to choose from!

The 4 stages may seem a bit light, and in truth I would have liked a couple more as well, but what’s here has been built for maximum replayability.  Each of the 4 stages has 3 modes; Casual, Hell and Infinite mode and even on casual I struggled during half the stages.  Hell gets crazy and infinite mode is right up there in difficulty as well.  You have a shield, but it’s only good a tiny bit of damage which means you need to duck, dodge and shimmy all over the place to stay out of harm’s way.  To me, this plays a lot like SUPERHOT VR with levels turning into a sort of dance as you try and avoid getting hit while still taking enemies out.  Bullets typically come at you with gaps in them that can easily fit your head, but when they start coming from multiple directions and your avoiding sniper and laser fire, it gets intense.  I didn’t expect this to be as physical as it was, but if you play on hell or infinite, you may want to do some light stretching beforehand.  There are also weekly challenges that ask you to play the game with select loadouts that ramp up the difficulty and keep the game constantly feeling fresh. 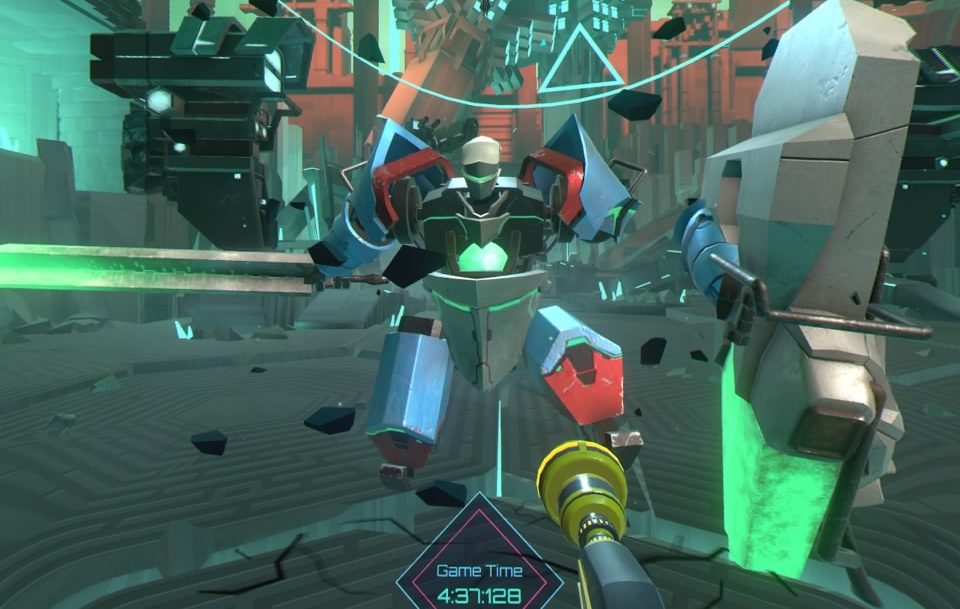 The four bosses all have their own unique flare and weaknesses

Blaster of the Universe, on the surface may seem like a bit of shallow game with only 4 stages, but there is a ton of replay value here when you include infinite and challenge modes and the global leaderboards that accompany them.  The crazy variety of weapon combo’s lets you experiment and play how you like and the challenge of dodging a plethora of projectiles coming at you from all sides is a blast.  Whenever I got hit, I cursed my own lack of skills and adjusted my play accordingly.  This is great fun and while same may just say ‘Oh, another wave shooter…bleh’ I can assure that Blaster of the Universe sets itself apart with its look and gameplay.

What would I pay? Blasters of the Universe is easily worth the $15 price tag.  The 4 stages still took me hours to get through on both difficulty settings and the gameplay is solid and unique.  If you are looking for a VR shooter, this is good stuff.

Archiact provided The VR Grid with a review code and, regardless of this review, we thank them for that!