Warchasm gets right to business as there is no story or explanation as to your motivations for what you do in this game.  What are doing exactly?  Well, you ride a futuristic minecart hurtling down a variety of sci-fi inspired tracks while dodging obstacles and shooting all the enemy robots that teleport into view as you travel from planet to planet. 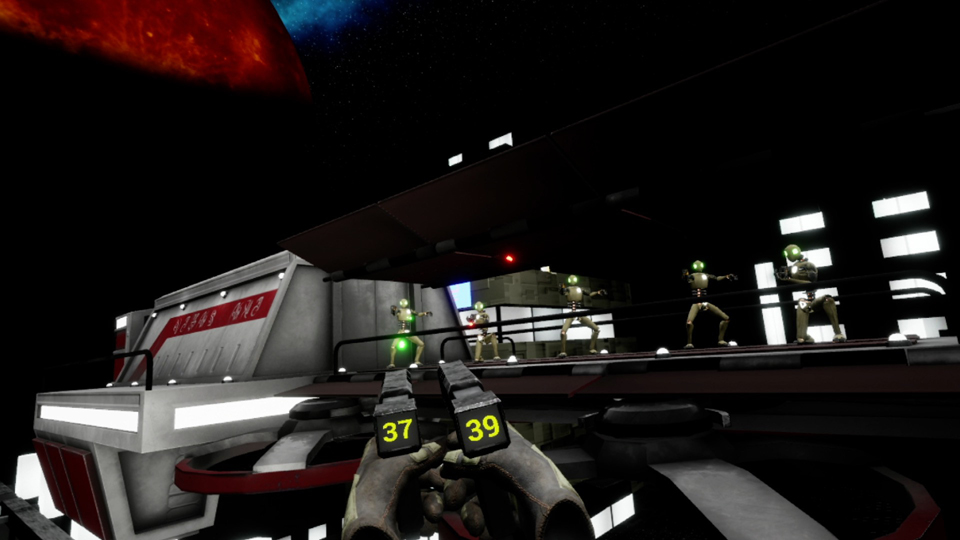 On-the-rails wave shooting is the name of the game here but Warchasm does its best to break away from it being just another stationary shooter by adding a few different elements to spice up the action.  For starters, your rail car can be tilted to avoid obstacles on the track by pushing left or right on nearby handles.  Secondly is the variety of obstacles along the track in each stage which will have you ducking and dodging left to right to keep from being hit.  You have a health bar and optional shields which can be replenished by killing the enemies and shooting the random drops which is a necessity as your ammo count is tied to those drops.  Don’t worry, if you do run out, a simple button press lets you spin your gun and adds 5 rounds to your weapon so you are never out of ammo, but it’s best too never get that low as enemies can be overwhelming at times.  After the 1st stage you get access to additional heavy weapons that can be used to aid your efforts but have a very heavy cooldown so it’s best to use those only in dire situations.  Each stage is broken up into checkpoints so should you perish, you won’t lose much in the way of progress and as you’ll know what got you the last time, it’s easy to prepare for your next go. 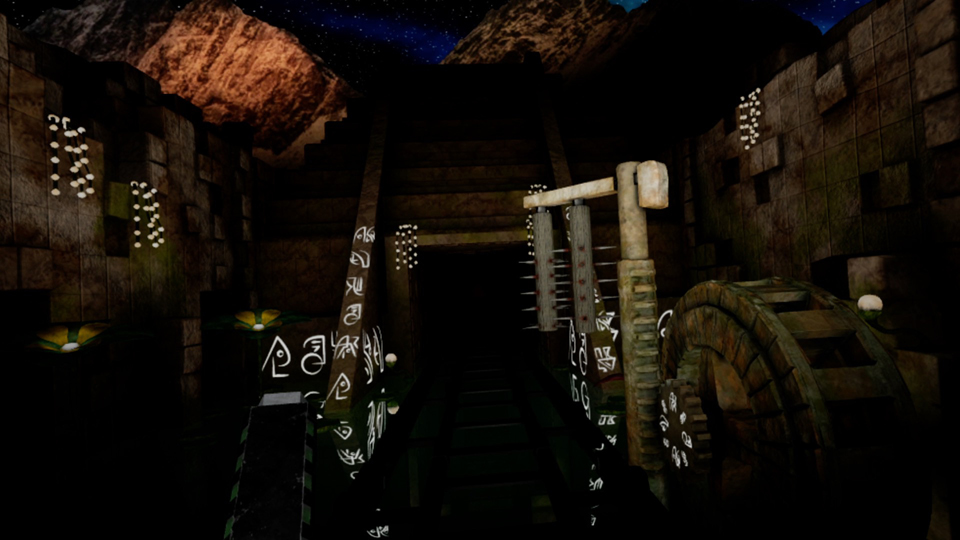 There are 5 separate themed stages in Warchasm from canyons to space ports with each looking a little on the simple side of things but displaying enough to get the job done.  The first stage is said canyon which has very high red walls on either side of you and feels very contained as that planet almost never opens up beyond that track in front of you.  That oppressive feeling pervades the campaign as you’ll almost always have walls on either side of you, though a few stages contain some larger areas.  The obstacles themselves come in a fairly large variety though behave almost identically so whether it’s a sign that lowers on the left or rotating spikes once you get familiar with the dodging mechanics it’s just a simple matter of dodging left, right or ducking though a few of those objects could mx things up by changing which direction you need to move.  Each planet is broken up into 3 or 4 smaller stages and the layout of each stage doesn’t really change and repeats the same environments over and over but given the nature of the game that’s not criminal, with each stage ending in a final battle in a scenario littered with cover for the enemies to hide behind.  Those enemies come in a variety of forms from little flying drones, cyborgs, squid like robots and a few others that will repeat throughout the game.

The sound effects are on point with all the pew, pew goodness you would expect from a wave shooter and some alright 3D audio that could indicate if some enemies are sneaking up on your left or right though for the most part as 90% of the action happens directly in front of you,  you’ll rarely notice it.  The soundtrack is a standout and is self described as “a retro sci-fi affair akin to the rick and morty theme if performed by the Prodigy”.  It’s enjoyable, upbeat, catchy and intense and would fit great in any high action sci-fi shooter and I found myself on more then a few occasions bobbing my head and moving my guns to the grooves. 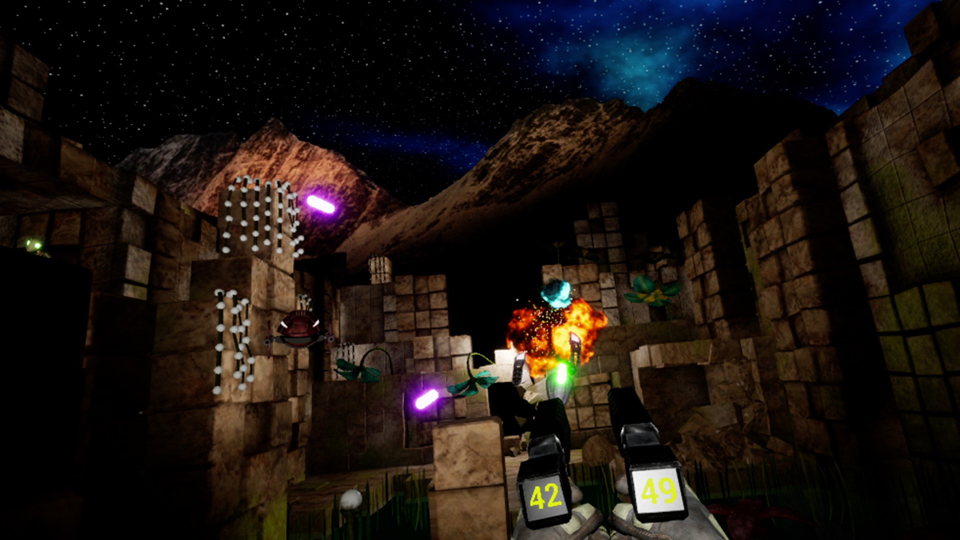 The final encounters off an increase in challenge.

Warchasm checks off enough boxes to make this a fun and physically active on-the-rails shooter but suffers from a few issues that do hurt the overall product.  For starters is the 3-star system in the game, which is perfectly fine for perfectionists, as in order to unlock the next planet you need a certain number of stars to do so.  We’ve seen this mechanic countless times in games but in Warchasm, the amount of stars needed to unlock the next planet requires near perfect 3 stars on almost all the stages..  That’s not to hard until the 3rd planet where the challenge ramps up and even on easy difficulty, I struggled to perfect all those stages. What happened at this point is that I had to replay the same stages over and over again as nearly all the other stages had been 3 starred and even when I had great runs, they weren’t good enough and having to replay those same few stages just got old.  I’m not a fan of this kind of progressions system as it hinders those with lacking skills from experiencing the entirety of the game, which does a disservice to both the player and the game.  The second issue is just how repetitive this can get as each new planet, minus an enemy or 2, is basically just a reskin of the last with obstacles and enemies behaving in an identical fashion from beginning to end.  It’s fun and physical, but I think this is best played in smaller doses as gameplay fatigue can set it quickly, especially if you are replaying stages.  I did enjoy the physical aspect of the game and trying to dodge all the obstacles and laser fire was a nice break from much more chill games. 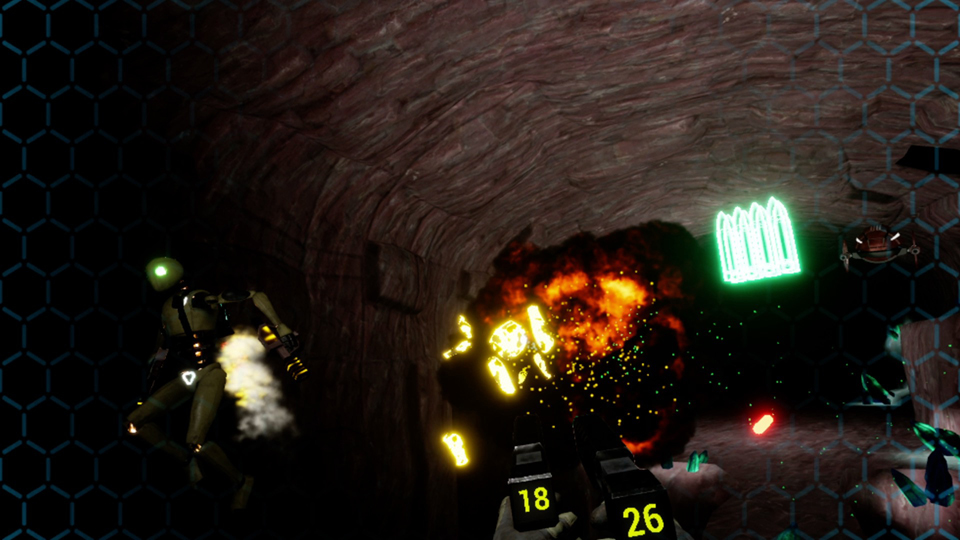 Warchasm is an, overall, fun shooter largely benefitted by just how much moving around and multi-tasking you have to perform.  Shooting enemies while dodging obstacle, managing shields and tilting your cart definitely adds to the fun factor and intensity but even with that variety of gameplay mechanics, repetition rears it’s ugly head sooner then later.  If you are in the market for a budget, engaging shooter then Warchasm will scratch that destructive and physical itch, but beyond that, there’s not much else here.

What would I pay? This is $15 which is fair but given the overall lack of variety in the content presented, I think $10 is a little more apt.

Defective Penguin provided The VR GRid with a press code for this title and, regardless of this review, we thank them for that!