There’s been plenty of simulators released over the years on a wide variety of platforms, from flight to sports and even tractors. So here we are in the far future with a world seemingly run entirely by floating robot TVs. They participate in a museum dedicated to a time long gone when us humans used to go to work, earn cash and learn a career skill. These robots don’t quite get the whole work ethic thing and thus don’t get job simulation right, but this results in a very enjoyable and fun VR experience. 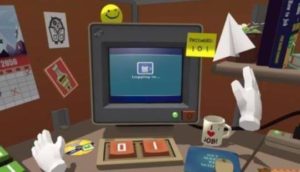 Causing mischief in the office

There are four different jobs on offer, namely Chef, Office worker, Store Clerk and Auto Mechanic, with each job taking roughly 30-40 minutes to complete all the tasks, but after which you are free to mess around and experiment. There are plenty of objects, furniture, structures etc to interact with and just to try things out to see if it is possible, which it usually is.

Humour abounds throughout and this is shown through in game animations, premise, in jokes and the all fun interactions you can get up to, all of which coincide with the blocky colourful graphics and cartoony sound effects. My personal favourite has to be the Gourmet Chef. Working in a small space in a café behind the counter and having fridges, sinks, cupboards of food and utensils at your fingertips is a blast. Orders come in the form of tasks which usually involve making a pot of soup, preparing sandwiches and cooking on grills and in microwaves and sending them out to the customer. If this sounds all quite complicated, it isn’t, this is cooking food at its most basic, but makes you wonder what a dedicated more in depth cooking game would be like on this platform.

It was just as much fun though to attempt to throw fruit into the fish tank, knock bottles off shelves with chicken drumsticks, adding chili powder to someone’s cup of coffee and seeing just how mischievous you can be through all the freedoms it offers. The same applies to the other jobs, playing Flappy Bot on your office PC, fixing cars in your garage and hurling plates at customers. It’s great fun not to just play, but for any other friends and family to watch on screen and offer advice to try new things and enjoy the results. It all starts to feel quite satisfying when opening doors, combining objects and throwing paper airplanes effortlessly.  Every action exudes its own charm and even the oddest actions feel natural and engage you in some way.

The player controls a pair of hands each represented with the motion controllers in your chosen virtual workstation. If anyone is familiar with your hand movements and control on Batman VR then they would have a good idea of the mechanics at play here. I do advise that the PlayStation camera be properly calibrated and sufficient space around you to play in your VR environment.  Some objects are an arm stretch away and when reaching high or low then the camera can lose track of the movement and interrupt play. This was never an issue on the HTC Vive but ported over to the PSVR it’s a little troublesome. 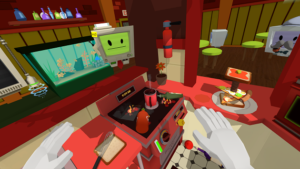 Wreaking havoc in the kitchen

It all comes across as a highly enjoyable experience, though it doesn’t have the best replay value as once you have completed all the tasks in each job, then its highly debatable whether returning for another bash will be appealing. This is certainly a game to show off what VR can do in terms of interaction and freedom. Any VR virgins will just think that picking up a bottle of wine, uncorking and pouring into a glass is just too cool in a virtual world.  The freedom of interaction here will put a smile on anybody’s face, it’s just plain fun.

What would I pay? At £23,99, the price point is slightly high as in regards to replay value and it is a relatively short but enjoyable experience. I do recommend purchasing but I personally would be content paying a little less.