Surprisingly enough, this is the 2nd time I have donned the Iron Man Suit in VR.  The first was a short experience that allowed me to look at my reflection in the suit before experiencing an on-the-rails cinematic involving an attack on the Avengers by Ultron.  It was a cool, all to brief short that gave me the slightest taste of what it would be like to be Tony Stark  and now,  4 years later we get a full VR adventure exclusive to the PSVR featuring Iron Man and his supporting cast in an adventure that should appeal to fans of the comics or films. 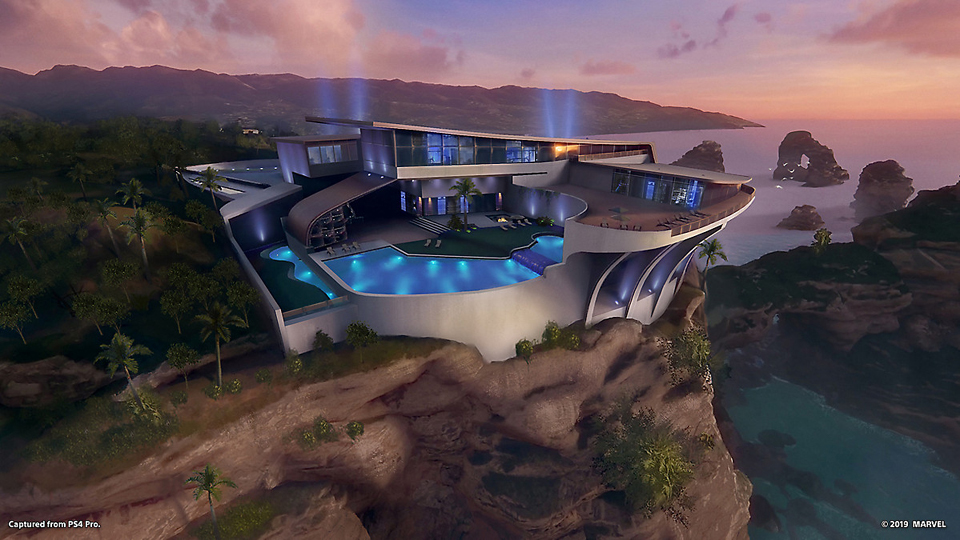 Your journey starts at Stark mansion

Move controllers are a must as you are required to perform a wide variety of tasks, many of which require using 2 hands whether it’s flying, shooting or just messing around during the storied moments in between stages.  A quick tutorial let’s you adjust to many of the games mechanics, the most challenging and rewarding being flight.  Unlike any other flight type game I have ever played, Iron Man’s flight mechanics utilize the thrusters in your gloves to propel and guide you.  It took me quite a while to get comfortable with the nuances of flight as, while your hands act as thrusters, face buttons are still needed to turn making for a slightly complicated, but still fun, movement scheme that takes a fair bit of practice to master.  For those that need them there are also a host of comfort options allowing you to adjust turn speed, iteration and vignette size to your liking with full locomotion being available.  Along with the flight you will also have to defend yourself from the hordes of robots you’ll be facing using a few weapons at your disposal like blasters and missiles as well as a few more unlocked during the campaign.  Just pointing and shooting will fire your standard weapon which can overheat if used to fast and tilting your Move controllers down let’s you launch your missiles from the tops of your wrists and should you being feeling a little punchy, you can do that to by holding ‘triangle’ lining up a target and releasing, whereupon you propel forwards and smash your foe.  Additionally their are a whole bunch of context sensitive situations that pop up throught the story like having to bend steel, pull out batteries, put out fires and a host more mini-objectives that break up the large amounts of flying and fighting you’ll be doing. 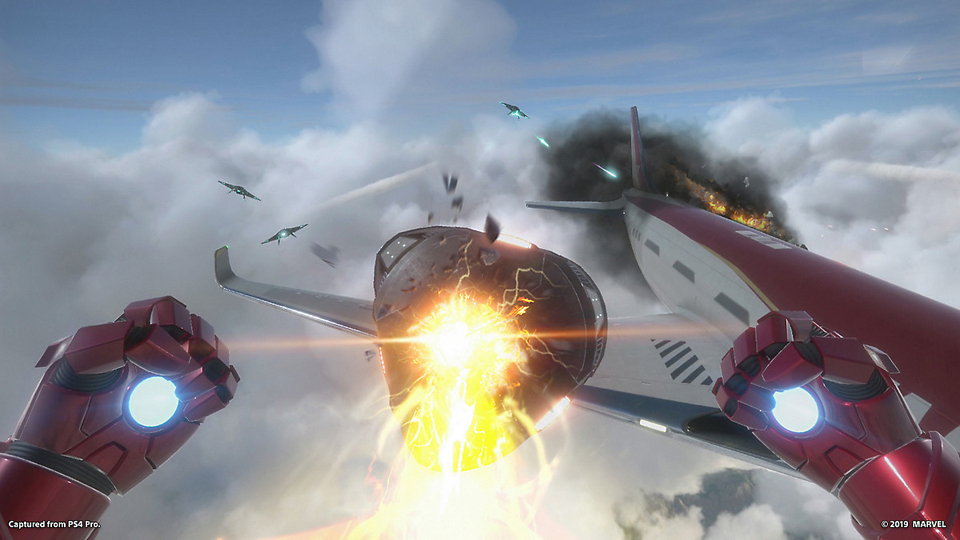 Some of the set pieces in here are just straight up awesome!!!

In between missions you’ll find yourself back Starks mansion where you upgrade and customize your Iron Man armour to your liking.  It should be noted that these sections out of the suit utilize node-based movement, which was disappointing.  Different skins are unlocked by completing objetives during the campaign that offer some substantially different looking outfits but the upgrade system here is where you should focus your attentions.  It’s here you can increase the efficiency of every part of the Iron Man suit from the thrusters, damage of your weapons, power supply and a few more options that you can choose using points earned after completing each mission.  Each mission has a 5-star ranking system which is attached to how many points you earn.  Additional leader board ranked modes are also available which have you racing and killing enemies in a variety of stages, some from the campaign, so for those looking to show off their superhero skills, you can and you earn upgrade points by completing these side missions and I recommend trying each of them at least once so you can max out your armour!

Iron Man VR’s presentation is all over the map with some wonderful more intimate setting like Tony’s Mansion or being inside his jet but become much more erratic during the flight stages with the environments looking anywhere from great to not so good.  Almost everything in here has the look and polish of a AAA game from last gen and the cut scenes are a treat with the character models looking and animating wonderfully, especially the villain Ghost, who is just unsettling.  The stages that take place high up in the sky look awesome thanks to their being much less environment to render so whether it’s around a falling plane or Shield heli-carrier, these levels just felt more epic.  The stages closer to the ground don’t look bad by any stretch though the Shangai stage is by far the most underwhelming one thanks to it’s nighttime setting, lacking city activity and blurry building textures.  In stark contrast to that (see what I did there?) is the heli-carrier stage which has you flying all around and inside it as you battle back a horde of enemy robots.  The robot drones also have a fair bit of detail and are daunting as they fly all around you unleashing a variety of attacks from lasers, homing missiles, gravity wells and some up close and personal attacks.  The game is clearly inspired by the MCU version of the character and his trinkets with Starks home, mannerisms, and the overall look of the game feeling like an extension of the movie franchise.  That’s great because it allows the player to fill in the narrative gaps as this almost jumps immediately into the VR adventure, lightly touching on Tony’s superhero origins.  The further I got in the game, the more impressed I was with the presentation and I soon set aside the game’s visual shortcomings. 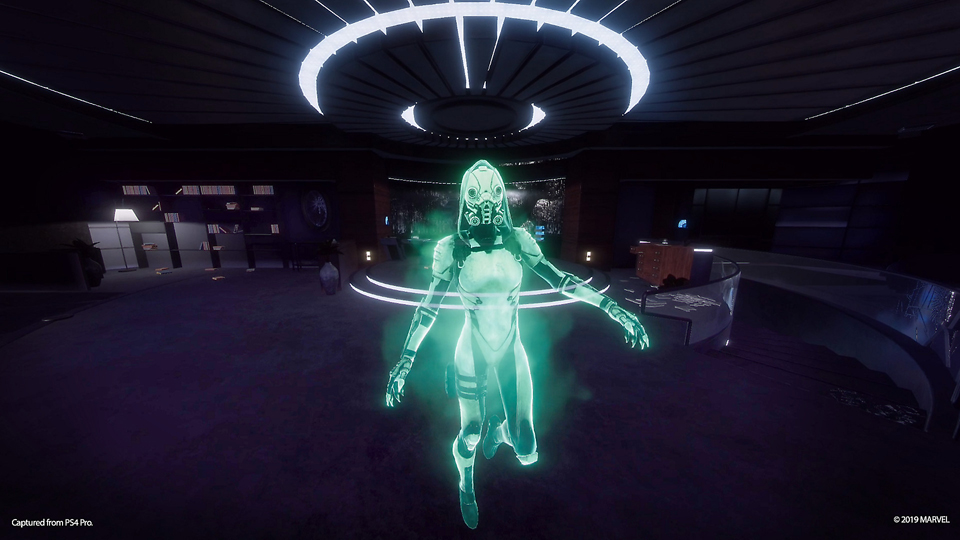 The villain Ghost definitely isn’t a fan of Tony.

Arguably, Iron Man VR’s biggest strength is the story.  Tony is the smarmy charmer we are used to with the supporting cast of familiar characters all doing fantastic jobs at establishing their own traits.  The narrative in here is quite fantastic and has an epic quality that we don’t see enough of thanks in large part to just how much voice acting is in here.  Conversations are frequent with each stage having you in constant chatter with your AI companion as she helps you through each action packed stage with lengthy cut scenes, both forced and optional, fleshing out you and the other NPC’s in the game.   3D audio is on point which awesome as every time you find yourself in a confrontation, the action happens all around you and with drones coming at your from all sides, it’s nice to hear them coming.  That said, some more up close and personal conversations can sound a bit off at times.  If you turn your head to far away from the speaker, the 3d audio may suddenly shift ears making for some awkward sounding conversations, though this is really a minor issue.

Iron Man VR is full of impressive moments and loaded with a ton of fan service but I can’t help but feel like this is a game better suited to 2018 PSVR as many aspects of this feel dated.  The game boasts about pseudo-360 tracking thanks to some voodoo with the moves and while you can turn 360 degrees in VR, turning around brings up giant white text and arrows that tell you to face the camera.  Face the camera and it’s not an issue, but a slightly less visually aggressive system would go a long way to keeping immersion in check.  Secondly would be the battles themselves which are hectically fun, especially as you unlock new weapons and upgrades, but by mission 5 I was burning out on the sameness of it all.  This is probably partly due to my frustrations with the controls as for every fluid fast-paced maneuver I performed, it was almost always shortly followed by careening into a wall or object.   It’s a fun and unique movement system, but I think it will take many players awhile to get comfortable with it.  Lastly would be the rather lengthy and frequent loading screens which do plague the game.  I don’t want to harp to much on the negative as it was an overly fun experience and for every not-so-good item in the game is 5 other truly entertaining highlight momemts.  With a 6 to 8 hour campaign based around just how much time you take exploring the more interactive sections of this game, it’s got some legs and the fact that you are scored on every stage plus those side missions gives you plenty of reason to come back, if not just to be able to fully customize your suit. 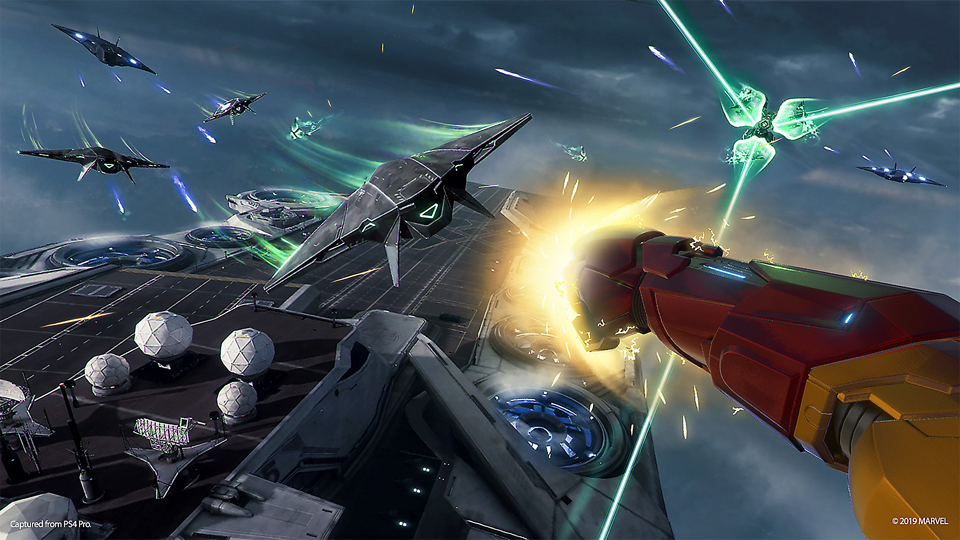 Sometimes all you need is some good old fist punching!

Iron Man VR is a satisfying romp in the Marvel Universe thanks in large part to how much attention was paid to the details.  It’s those smaller nods Tony’s past and the Marvel Universe as whole that I greatly appreciated, largely because they felt true to the story and not shoe-horned in for fan-service sake.  Throw in some satisfying and complex aerial combat, dramatic story with some comedy and fun twists and turns and it’s a game that delivers in spades.  It’s not perfect by any stretch and the age of the PS4 is showing, but Iron Man VR is still a treat for anyone looking to feel like a superhero.

What would I pay? This is $40 US and worth it.  As I said, it has a few rough edges, but the overall package is a solid one delivering an experience I think many of have been waiting for since we donned our first headset.

SIEC provided The VR Grid with a press code for this title and, regardless of this review, we thank them for that!