I love when VR games surprise me, even if it’s just making something old feel new, which is becoming Garage Collective’s little VR niche.  Their first title, Stones of Harlath,  delivered an action RPG in the vein of Skyrim, though on a much smaller scale and used very retro pixel-art style visuals.  Back is that visual style, though this is an FPS and you play as a member of the Shock Troops, who police the galaxy using whatever force is necessary and yes, that means lots of firepower. 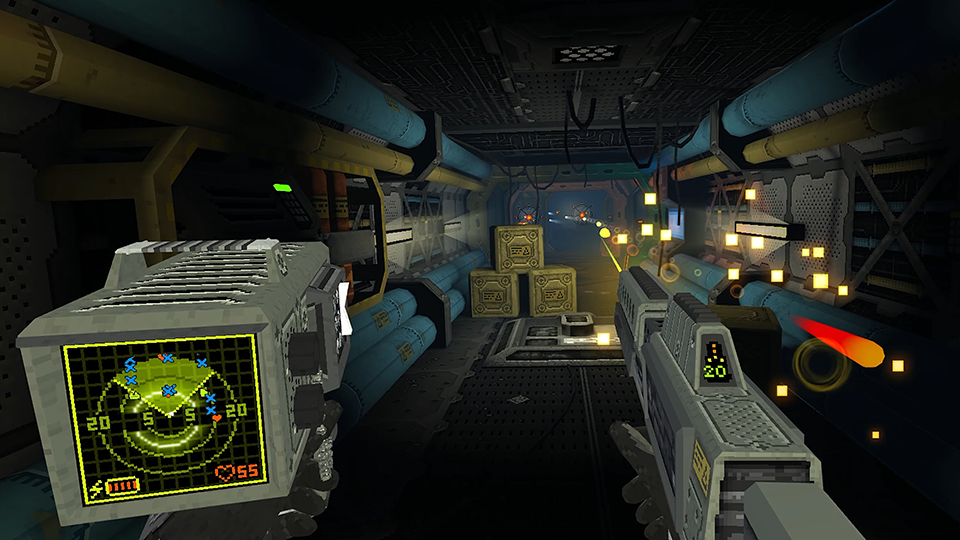 It’s looks like an old-school shooter, but it’s much more than that!

Armed with a weapon in one hand and a radar/flashlight in the other, you’ll be wandering facilities and planet sides with visits back to your Hub area, a space station, giving you details on your next mission.   Standard FPS Controls are the affair here with options for height, click-turning & blinders should you need them.  Once you are good to go, head on over to the mission select console central on your station, enjoy the brief synopsis as to why you are being dispatched and proceed to take out the baddies that get in your way.   Make no mistake that this is a classic FPS in the vein of games like Doom & Quake that requires you to move & shoot as fast as you can lest you take damage.  Enemy AI isn’t great with them mostly just B-lining it to you once they have been alerted to your presence but come in deadly forms & numbers that can still make encounters harrowing as you duck, dodge & shimmy out of the way from incoming fire.  Each mission has 4 levels giving the game a total of 16 stages to cut a swath of destruction through with each stage also having hidden upgrades, allowing for increased health or damage via modifications that can be applied to you back in your hub station.  Beyond all that running & gunning are key cards you’ll have to find, ammo and health pickups to keep you going as well as switches, new weapons, deadly asteroids and many more surprises that did keep the game feeling fresh which is commendable considering just how retro this shooter can feel at times. 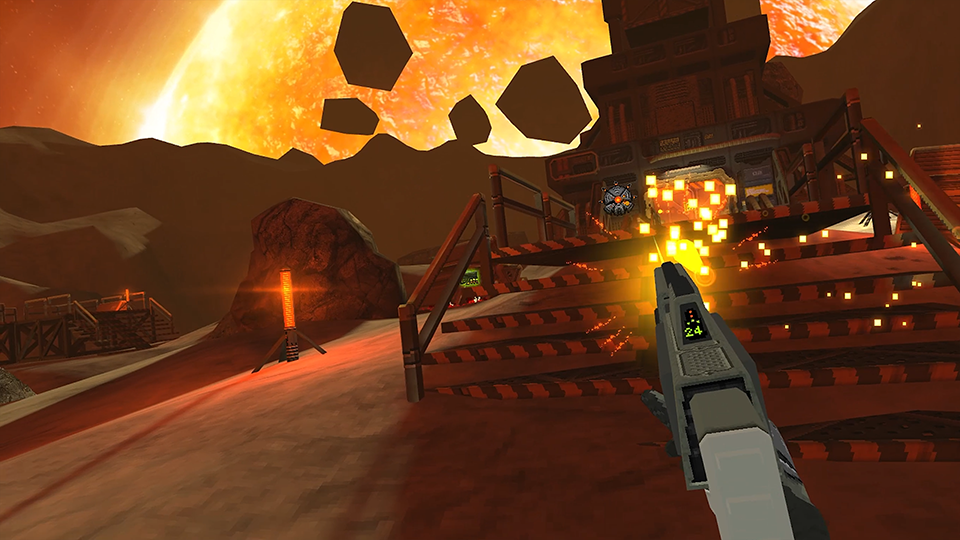 On this planets surface, watch out for incoming asteroids!

Speaking of retro, the art style here is exactly that and while the world is rendered in 3D, many of its elements and the enemies you face are little more than 2D renderings & sprites making for a game that feels like it’s from yesteryear, but thanks to VR, still feels quite modern as well.  Every area you visit has a unique theme and carries with it a pixel density that makes it look like you have been placed in game from the SNES era of titles and it comes off as quite charming.  From space stations, mining colonies & the surfaces of a few planets, each stage is fully realized and has plenty of unique details that make each feel authentic for the sci-fi themes presented.  You’ll face dangerous robots, armed Martian soldiers, aliens & a host more foes that all offer their own unique challenges and of course, there are a few larger boss battles sprinkled in here for good, larger scale fun.

Once again embracing it’s 90’s roots is a soundtrack and effects that brought me back to those classic days of gaming.  Enemies will sputter an unintelligible line or make a guttural noise or sound indicating they have seen you and all the action occurs to some harder voiceless rock track and I couldn’t help but think I was playing through a modernized version of classic Doom.  Sound effects are all on point with every weapon, surrounding environments & explosions all sounding perfect making for an overall excellent audio package. 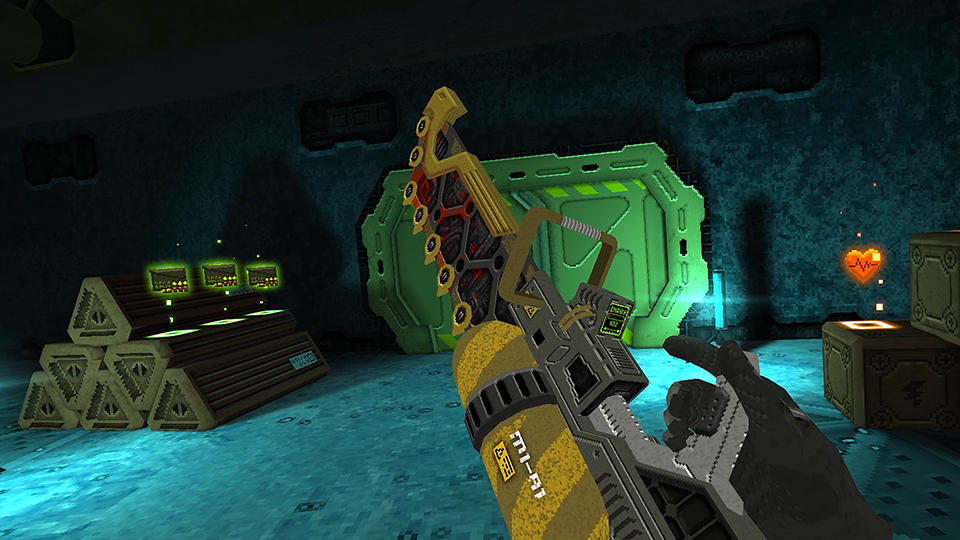 You’ll pick up a few different weapons on your journey.

Shock Troops really does embrace its roots quite well and if you are a fan of 90’s FPS’s than you’ll be a fan of this.  It does suffer at some points but many of its shortcomings are balanced out by included mechanics that prevent you from losing too much progress.  Early on it’s little more than shooting the enemies you stumble upon but as each new stage reveals new elements, there becomes much more to contend with which did lead to some frustrations.  For instance, the second stage had those incoming asteroids I mentioned plummeting at my location forcing constant movement lest I be killed.  No worries.   However, when you factor in that you’ll be dodging sniper fire while dispatching other troops and the cover that you find might still not protect you from those fiery projectiles, it did cause a few unfair deaths.  Thankfully, there is a save system in here that lets you trigger checkpoints at specific points in a stage so should you die, you will be re-cloned with all your progress and kills saved, making things a little easier on your next go.  If you quit the game though, you’ll have to restart that level so it’s best to duck out once you are back at your station if you don’t want to lose any progress.  I also initially felt like the radar gun that shows enemy and item locations was a tad useless but as I ventured through the campaign, I relied upon it more and more and by the end was very thankful for its inclusion…especially when the aliens show up.

It’s not a perfect game, but it is a fun one and fans of old-school shooters should have a blast with this!  It checks off all the boxes for a classic FPS and benefits nicely from VR in both mechanics and presentation.  We honestly don’t get enough campaign-based VR shooters and the relatively unique art style used is almost reason alone to pull the trigger one this one, the fact it has a fun 5 hour campaign has me highly recommending this!

What Would I Pay?  For $10, this is an easy ask as there is a ton of bang for your buck here.  If you are in the market for a new VR shooter, just pick this up already, I doubt you’ll regret it.

Garage Collective provided The VR Grid with a press code for this title and, regardless of this review, we thank them for that!