Looking to kill zombies while exploring the world around you, scrounging for weapons and items to assist ? Well, Welcome to Purgatory Island! You’re being watched and experimented on by The Watchers.  They have infected you with their animus, life isn’t just leaving you,  but also changing you into one of the undead. Your only companion a voice in your head helping to guide you through this hellish nightmare. 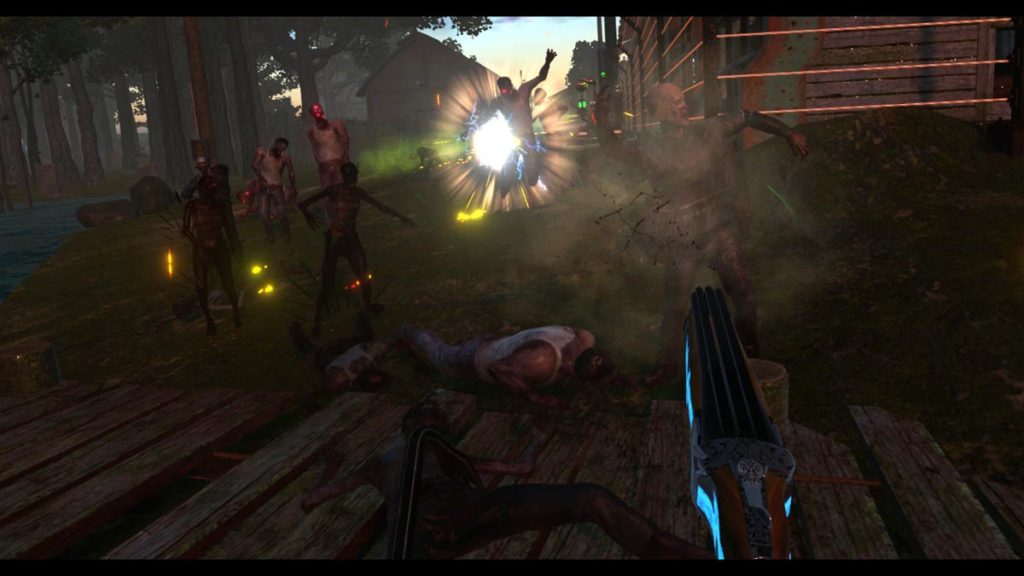 When the horde comes, you better be ready!

The gameplay is a lot of fun as not only is there a campaign with a bit of a story, there is also an arcade mode, along with some other mini games.  I know what you’re thinking, but you’re wrong, dead wrong (see what I did there?) this is not just another VR zombie wave shooter. This has been one of the best experiences I have ever had in VR. The campaign is open exploration, with daytime, dusk, and nighttime. Use the day to prepare because once the sun goes down the zombies come out in force. While the game takes place in relatively small area, you can easily lose yourself in the surrounding as there is a lot to do with plenty of weapons and tools at your disposal. Go nuts throwing grenades and unloading clip after clip into the enemy, or pick up a bow and axe and take things slow and more importantly quiet (and personal). There are scoreboards to keep track of players with the most kills in each mode and, while they recently implemented an update so that players names properly appear when they kill enough to make the list, there are  still no “local scoreboard” (One for you and those on your friends list). The campaign is longer than most but still somewhat short, however from what I understand this is only chapter 1. Co-op was just recently implemented and still needs a lot of work but, if you and a friend have the game, you can play Arcade mode together. I hope they put more work on the multiplayer as a Co-op campaign mode or vs would be amazeballs!

There are lots of movement options teleportation, point and click, trackpad locomotion, it even supports the Omni (if you’re lucky or wealthy enough to have one). I preferred trackpad locomotion as it was more immersive than the other options. I did get stuck in a box or two and on a door, but that seemed somewhat intentional for the immersion. There is also snap turning which helps a lot for maneuvering and keeping from being snuck up on. You can also choose left or right-handed control options.

The artwork is a lot better than I expected from an indie game. There are a good variety of zombies that keep things interesting. The detail of the zombies seems to be where the most detail was put in. The island and camp are done more than well enough to keep you immersed with lots of details and great shading. This place is dark and the spookiness and overall vibe will keep you on your toes. You’ll catch yourself looking over your shoulder for zombies well after you take the headset off. 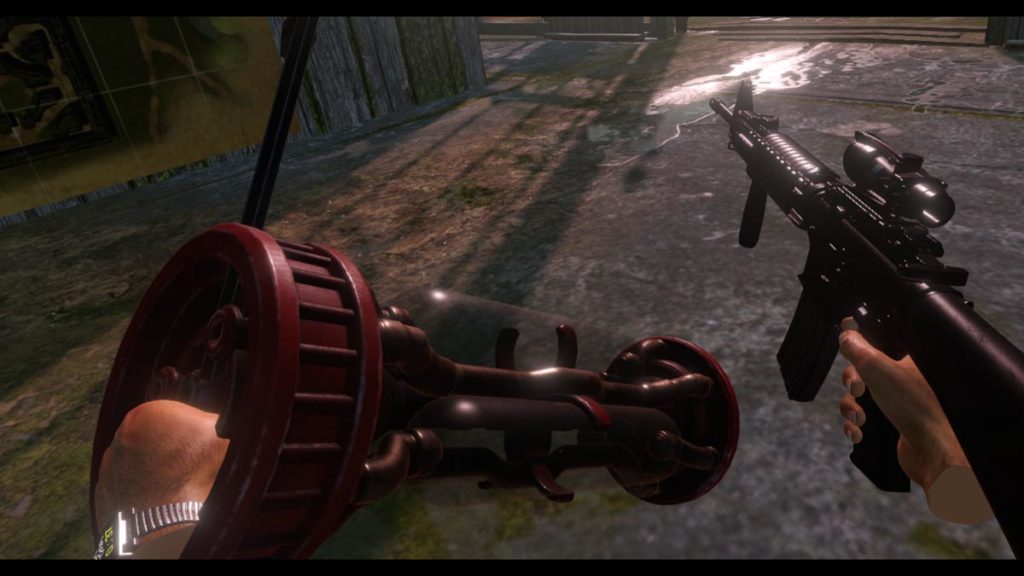 The music, sound effects, and voice acting are pretty spot on. The zombies sometimes sound closer than they really are and damn! they sound scary.  You can almost feel the hot zombie breath on your shoulder and the first time I was killed by a screamer I had to remove the headset and take a moment. The sound effects keep you immersed from the frogs dying to the sound of the gas flowing you feel like you’re there. The performance from the voice in your head is perfect and it’s clear the voice actor enjoyed his time on the project.

Combat will keep you on your toes every time you think you’ve got it figured out, something new gets thrown in the mix. There are your average zombie walkers, runners, and even some crawlers. Then you have screamers that run in at you and explode. Shaman that use their powers to throw balls of zombie magic at you. Ghost zombies that teleport around and will quickly sneak up on you. As well as the Solomanari; watch out for these devils they are hard to kill and spawn other zombies to protect them. The various weapons will keep you busy just trying new weapon combinations and strategies.  There are grenades, melee weapons, and lots of ranged weapons. The detail of some of these guns is amazing, manual reload is awesome and immersive. The first time my gun barrel overheated I was in shock. There are pistols, shotguns, smg’s, a bow and arrow, and rifles. You can find an axe, crowbar, bat, even a katana. Ammo can be hard to find but it keeps you trying new things and besides every day you survive brings new supplies to your home base. Have fun and try everything until you find what works for you. 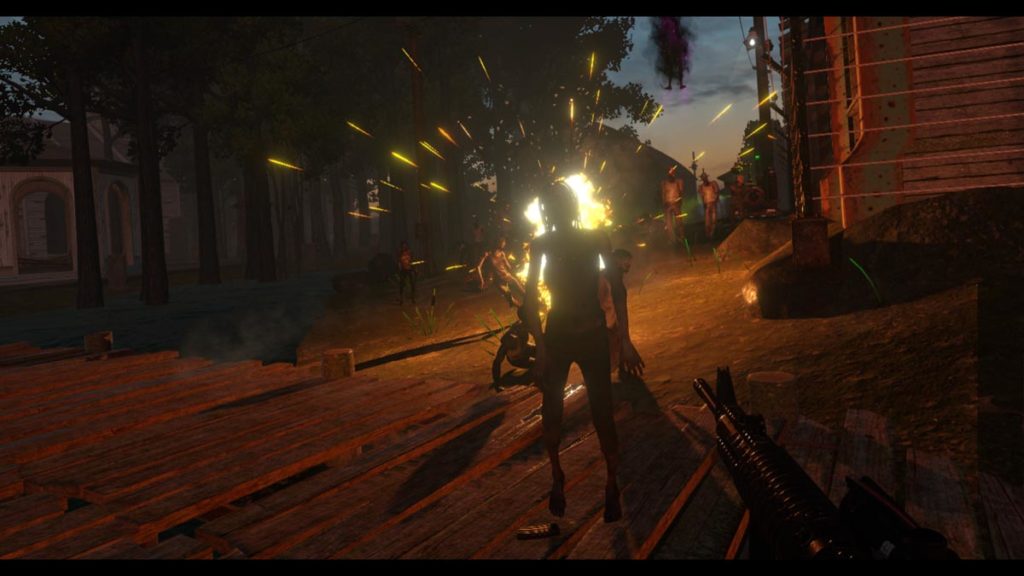 The lighting effects are impressive…most impressive.

Overall this game kept me highly entertained, there is so much to do and see. The developers listen to their consumers and fix bugs and make changes to the game constantly. It seemed like every time I played there was something new added or something improved. These people love their game and it shows in their quick response to feedback on the Steam forums. That being said, if they are reading this, I believe improving the multiplayer by adding an area for players to socialize, form groups, and have (fun maybe some paintball or something like that) would greatly improve the experience. You could even make that area free to play to encourage players to try the game and talk to players that own the game.

What would I pay? At the current price of $19.99 it’s a bargain for what you get compared to other games at that price. Though with some of the mentioned multiplayer improvements and a couple more chapters for the campaign I’d pay $60 easy.

Stormbringer Studios provided theVRgrid.com with a review copy of this game and, regardless of this review, we appreciate that!