Room-scale VR is arguably an under-utilized way to play Virtual Reality.  Of course, many games support room scale but most of the time, that just means you can move around a little in your play area and reach for things that are nearby.  Games that maximize that space, using every square inch to immerse the gamer in a virtual world are somewhat rarer and even more so are games that remove all forms of artificial locomotion and ask the user to ONLY move around their environment, which is exactly what Eye of the Temple needs you to do.  As an Indiana Jones type adventurer, you must enter a massive temple navigating its structure, finding treasures and solving puzzles, all to unlock the mysteries that lie within. 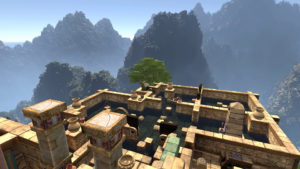 To play this you need a 2m x 2m (6ft x 6ft) clear play area as you will be moving to its very edges to move through the temple.  Armed with a torch and whip, you’ll start at the temple’s base and play what ends up being a ridiculously clever puzzle platformer.  Every block you can walk on a 1ft square space with many of the blocks moving throughout the environment.  Some move side to side, others up and down and besides those simple platforms are round stone “logs” that you need to ride across a gap by getting on them and physically walking in the opposite direction they are moving to stay on them.  Throughout the temple will be vases you can smash which contain hidden gems with many platforms you ride also having those same gems appear that you need to touch to collect.  In each section of the temple are obelisks and rings that allow you to trade your gems in for larger crystals that need to be placed in said obelisks to activate them, and once all active, will allow you to enter the final tower area.  Small statues of birds will bee found throughout the game that need to be activated by lighting their torch, whereupon a small piece of the Temple’s dark history is revealed.  While the opening moments of the game really are about patiently waiting for the next platform to hop on to, puzzles start to show up that require a lot more thought as you’ll need to not only avoid wall panels and pendulum traps but have to activate certain traps in specific order lest you be crushed by a ceiling or plummet down to the spike-filled floor below.  Should you perish, fret not as the game will have you stand in a rest position and start you back off on the last stable block you had stood on, so progress is never lost. Getting through this temple will take roughly 4 hours if you are a bit speedy and don’t get held by any puzzles though I’d expect that many of us might take a little longer to conquer this hidden temple, especially of you are trying to find all its secrets. 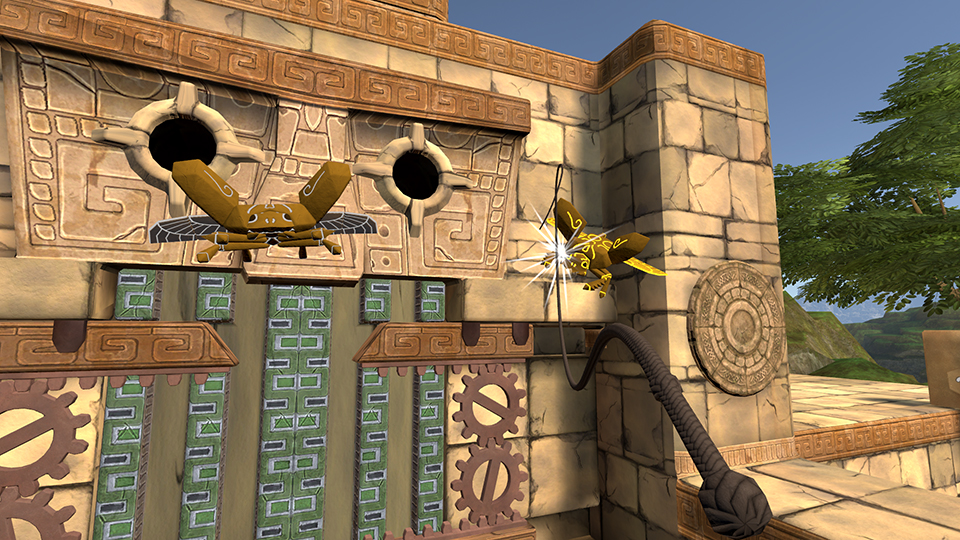 Watch out for Scarab Beetles!

Eye of the Temple is undeniably inspired by Mayan temples, and it shows with the stonework being largely yellowish with the temple hidden amongst jungle covered mountains.  The first area has you at the Temple’s entrance and introduces all the game mechanics as you move across large stone pools.  Once past the main doors you’ll be able access multiple areas of the temple as identified by floating text that appears telling you you’re moving on.  While the overall theme of a Mayan temple never changes, those individual stages do mix things up by having you scale down massive cliff sides, in darker catacombs, the fiery depths of “The Cauldron” and even a late game minecart ride that brings your around the entire temple, all leading to a game that really never gets old.  The draw distance in here is fantastic allowing you to see the entirety of the temple and its various sections letting you to plan your path accordingly on the larger puzzles.  The art style is slightly cartoonish, making me feel like I was transported into a 2D puzzle/platformer made into 3D and I really enjoyed the polish on display.  Lighting effects are also decent with your torch and other light sources providing enough light to let you see what’s ahead and casting long shadows on the environment.  It’s a solid looking game with very little to complain about with any knocks against the presentation being nicely countered by the polish of the overall experience. 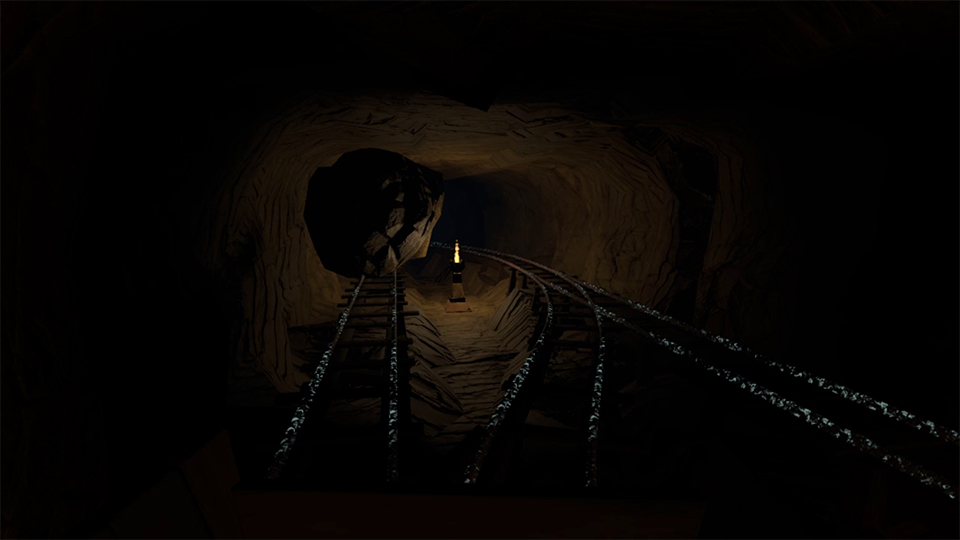 The Mine cart gives you access to the entire temple!

Sound design is also on point with an ambient and cinematic soundtrack that kicks in at crucial moments with the game often leaving you to the sounds of the temple around you as flames spew from a nearby jet or you can hear the grinding of stone upon stone.  There is a small story in here as explained by those bird statues though is really just there to provide the player with the motivation to continue forward as it’s a relatively shallow tale but does enough to add a little weight to campaign. 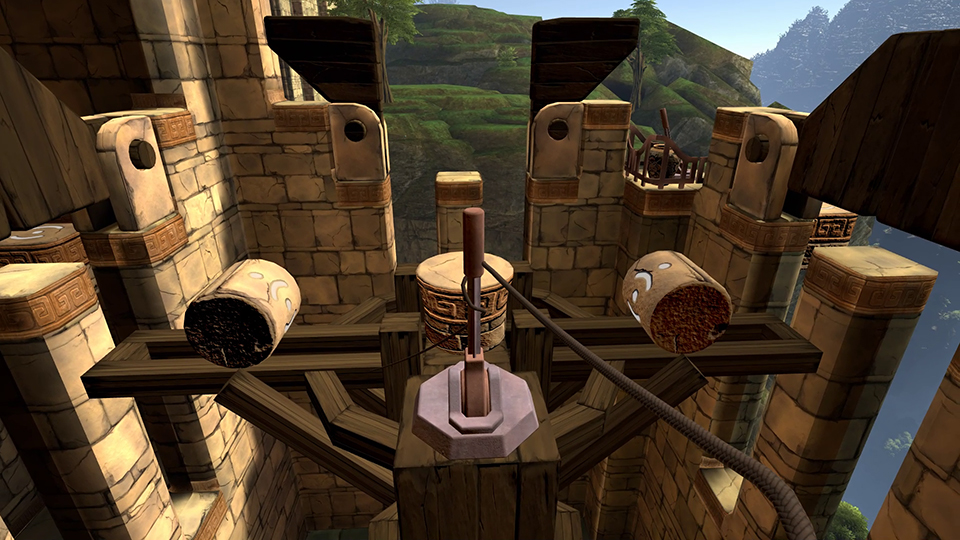 Whipping a lever is easier said than done!

I had a ton of fun with Eye of the Temple as it was a nice reminder how just how effective a tiny amount of room scale can be.  Despite the clear attention that went into the level design, it’s not all 1 perfectly moving machine with the whip especially causing me a little too much grief.  You need your whip to break those vases or latch on to levers and pull them and even defend yourself from incoming scarab beetles, but it can be finicky, and I oftentimes missed what I was aiming for, which isn’t too bad as most of the time as you can just try and try again without consequence.  However, once I ran into the puzzles that required me to pull levers in a specific order, having a whip miss as my platform slowly moved away from it would force me wait for that puzzle to reset so I could try again which is doubly cumbersome as you have to physically move around the environment.  Those moments are few and far between, but when I ran into those puzzles, I groaned in dismay at the frustration I was about to experience.  I also ran into a few silly deaths as the game didn’t quite register me being on the next platform or placed me in geometry causing some confusion and death but once again, these moments only occurred a handful of times and with the more than forgiving save system in place, it was easy to adjust what I was doing and continue onward.  One last note would be that if you play this tethered, cable management will be an issue as I found myself getting a little tangled at times so if you have the option, playing this wirelessly will remove any of these cable frustrations and for those that get uncomfortable standing for long periods, you’ll have to suck it up for this one.  For those completionists out there, once you beat the game you can return to the temple and try and find those hidden treasures that you missed or clean up any gems you didn’t grab on your first go, if you want those steam trophies, or you can start a new game that challenges you to get through the temple as fast as possible. 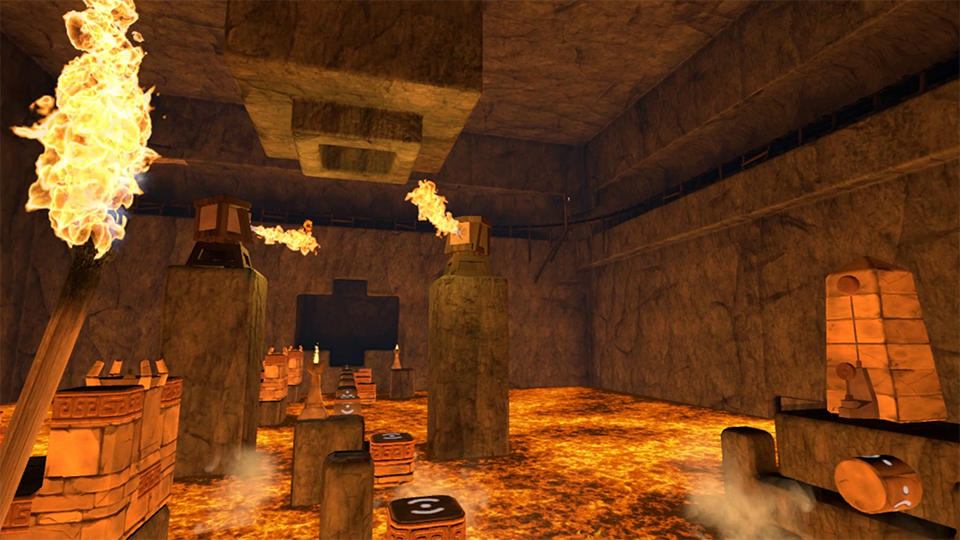 There is a lot to like in Eye of the Temple and I was surprised at just how addicted I got to this game, playing nothing else until had conquered it.  It’s a testament to room-scale VR titles of any size and while I praised the Quest version of Space Pirate Arena with its massive 30′ square play area, the paltry 6′ square play space in Temple is utilized so well that I am giving this game as much praise as SPA.  The natural movement required plus the clever puzzle designs and enormity of the temple have me recommending this to any VR player new or old as I think veterans will enjoy the fresh gameplay and newbies will immediately be able to jump in and enjoy the temple raiding action.

What would I pay? This is $20 US and worth every freaking penny.  I couldn’t believe how much this game got its hooks in me, but it did and highly recommend this to anyone looking to experience something a little different in VR!

Rune Skovbo Johansen provide The VR Grid with a press code for this title and, regardless of this review, we thank them for that!