September 2018 saw the original release of Vox Machinae for PCVR headsets and offered up a multiplayer shooter where each player controlled giant mechs outfitted with an array of abilities and weapons.  With positive reviews, the game has, up to this point, garnered a reputation for being one of those undiscovered gems, assuming you are into multiplayer only combat.  With the release of the Quest 2 version comes not just the same game many have enjoyed up to this point, but a full single player campaign that looks to deliver an epic story on top of even more multiplayer goodness. 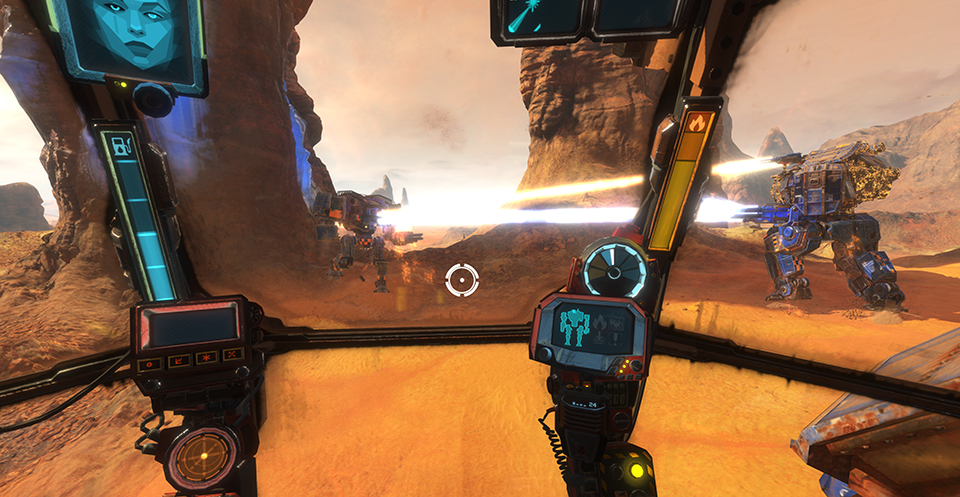 The mech battles get very intense!

Driving a giant Salvage Grinder (aka Mech) is easier than it sounds but true mastery of these machines will take a little time.  While in the cockpit, everything is controllers by the items, joysticks and screens around you so it’s critical that you familiarize yourself with your surroundings.  The various displays nearby show your radar, weapon status & mission objectives with levers also letting you honk your horn or even eject your chassis from the grinder and while it might seem like a lot at first, the layout is very intuitive with weapons and scopes all being relegated to the buttons on your controllers making for a great cockpit shooter.  You’ll have to steer and propel your grinder using the levers in front of you, much like a HOTAS controller, with an additional jump option that allows you to temporarily fly, but consumes fuel, which automatically refills when not in use, allowing for battles to get very vertical.  A rather humorous tutorial teaches you the basics of using your mech as a mining tool and after a rather unfortunate “incident” you are promoted to the security team tasked with defending the various mining outposts owned by your bosses and join a ragtag crew by participating in various missions from simple exploration, defending convoys and outposts as well as full blown assaults against an unknown foe sabotaging your efforts.  The campaign offers up over 10 hours of content, assuming you explore every narrative option, and in between those mech missions you’ll be on your ship, The Competence, talking to your fellow crewman and the AI assigned to you, learning about what makes them tick and even completing some mini missions that offer up a fair bit of comedy and entertainment value.  Various locomotion and comfort options are available for both mech and human modes from teleport and click turn only to full locomotion though the more limiting options are not available for the grinder missions as being in the cockpit should alleviate your discomfort.  In fact, the way this game is designed has me hearkening back to the days of the original KOTOR games and I really enjoyed interacting with the crew, especially when some of the choices I made in those conversations affected other conversations later on, making it feel like my choices were having an effect on my shipmates.  The campaign is linear, but that extra little attention to the details and the choices made with my companions really added another level to immersing me in this universe.  As you proceed through the campaign, the story gets nuttier, and amusing, and additional unlockables become available, including new grinder and weapon types, letting you tackle each mission however you like. 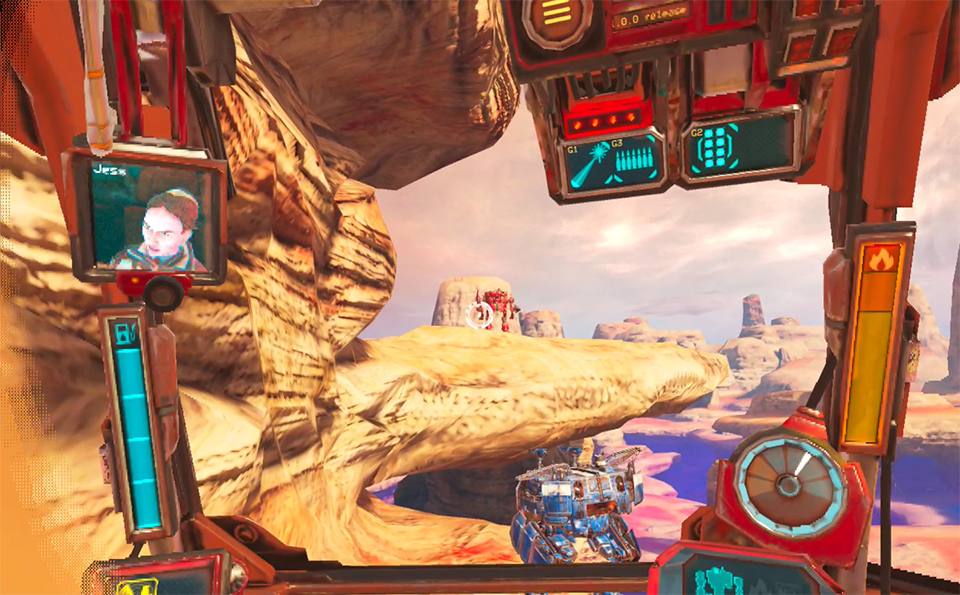 There’s a lot to figure out in the story heavy campaign.

Adding to all that single player action is the up 16 player mayhem across 6 different team and single player modes.  Deathmatch pits up to 4 teams against each other in classic kill the enemy fashion, Hoverbrawl is basically capture the flag, Botstomp is Vox’s horde mode, playable solo or with pals, and has you facing endless waves of bots.  Convoy can also be played alone or with others and tasks your team with escorting and defending trucks from AI bots.  Stockpile has teams capturing and controlling points around the map while Salvage has multiple teams fighting over a neutral salvage grinder to score points.  All of these modes have additional customization options from the number of teams allowed, points needed to win or how long each match will go and can even be randomized if you just want to see what the game will throw at you. Depending upon how you feel about multiplayer, some may be disheartened by the lack of any kind of a progression system.  Having unlockable skins or accessories would be a nice addition that wouldn’t affect gameplay but at the same time, I do appreciate that everyone playing is on a level playing field save for their own personal skills.  I’m not the biggest multiplayer guy on the planet, but what’s here should offer anyone countless hours of entertainment, especially considering it’s also cross platform! 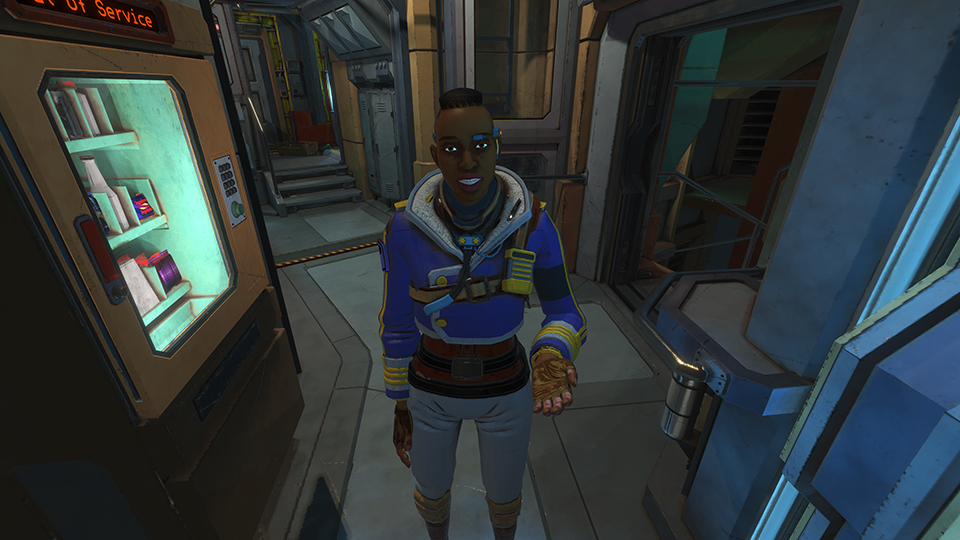 The characters can look a little awkward at times.

Vox Machinae is a beautiful game no matter which platform you play this on and while I was a little underwhelmed by the PC version, I was very impressed by what was on display on my Quest 2 headset with the entirety of the game being translated to the Oculus headset amazingly well.  It goes without saying that the PC version is, of course, substantially prettier, with increased texture detail on everything, though both versions suffer from some minor pop-in but given the scale of the game, that’s understandable.  The planets you visit are their own contained little sandbox areas with the entirety of each stage being loaded in and a draw distance that lets you see as far as you need to.  As these are all mining planets, they are typically barren and desert-like though each of the planets offer up their own unique geologies and layouts from the cavernous and mountainous to the barren and rocky and while the planets may initially appear like there is little more than a color palette difference between them, it soon became quite clear that each planet is special in its own way.  Character models look alright though some of their animations can look a little off and janky, but overall, they look cartoonish and decent enough to add to their personality with grinder missions having the various speakers being displayed on a cockpit cam that gave me Star Craft vibes.  Your mech will move and gyrate as you traverse the terrain with cables and anything loose reacting to each step with your visible hull changing color as laser fire is directed your way or should you overheat, your chassis armour will close, shutting down your grinder until it cools off enough so it’s best to avoid that whenever you can.  The stages are very large, in multiplayer or single player, and even the details on the mechs are a delight making for one of the most stunning Quest 2 games available and a damn fine looking one on the PC as well. 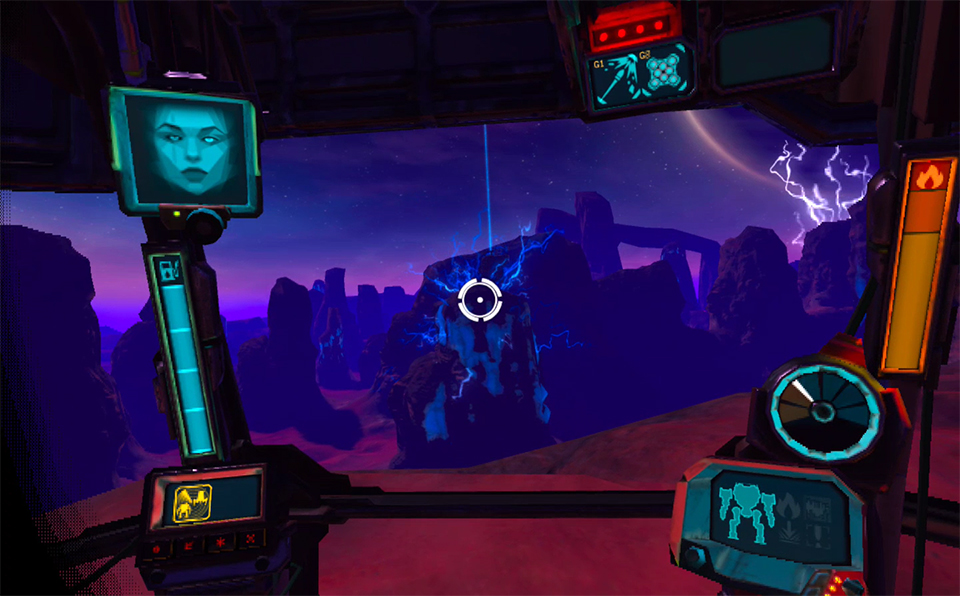 Each planet offers up something different.

There is a lot of game here and thanks to a fair bit of dialogue, it feels very cinematic with a script that just keeps on delivering from voice actors that, for the most part, do a great job at delivering their lines in an honest fashion.  The job of maintaining mining facilities in a distant galaxy is not a glamourous one with each character not only explaining events from their past that flesh out the universe, but react to the story in honest fashion and even when the dialogue gets cheesy, it’s still damn fun and I honestly felt like I was a member of the crew of my own version of Serenity, though this one has an intelligent AI (or 2) to help add to the quirkiness.  The soundtrack is a mix cinematic modern and retro sci-fi that is top quality, kicking in during the action heavy moments and falling into the background when just exploring or messing around with the overall audio design in here being a solid one.  Even in multiplayer, instead of just open mics, you’ll have to grab at a walkie nearby to chat and if that sounds a bit cumbersome, it is, but if feels authentic to the game and is something I appreciated, especially when your allies’ mouths roughly match their voice as they speak, adding yet another level to immersion.

I pretend to be a reviewer, so it’s my job to tell you all the good and bad that I find in a game and while Vox Machinae is far from perfect, it’s a game that continued to surprise and charm me, even 7 hours into the campaign.  Controlling the various mechs never got old and I enjoyed exploring every narrative path, not just to learn as much as I can about the world, but to enjoy the comedic script.  There are some minor annoyances that accompany the gameplay with some interactions with the environment causing frustration and no save system except for unlocking the next mission once you complete it, though should you be in the middle of a chapter and die, you can continue from a checkpoint, but if you don’t complete that stage and quit, all progress will be lost.  I did get hung up during a few battles, especially during the latter half of the game but upon death, you respawn at the last checkpoint with full health, so I was never really stuck for too long. Missions may also feel a little samey at times but given the rather expansive campaign, and just how much work went into mixing up the objectives, I never really got sick of it and enjoyed the ride.  Couple that with the 16-player multiplayer and Vox Machinae is a solid package that just keeps delivering. 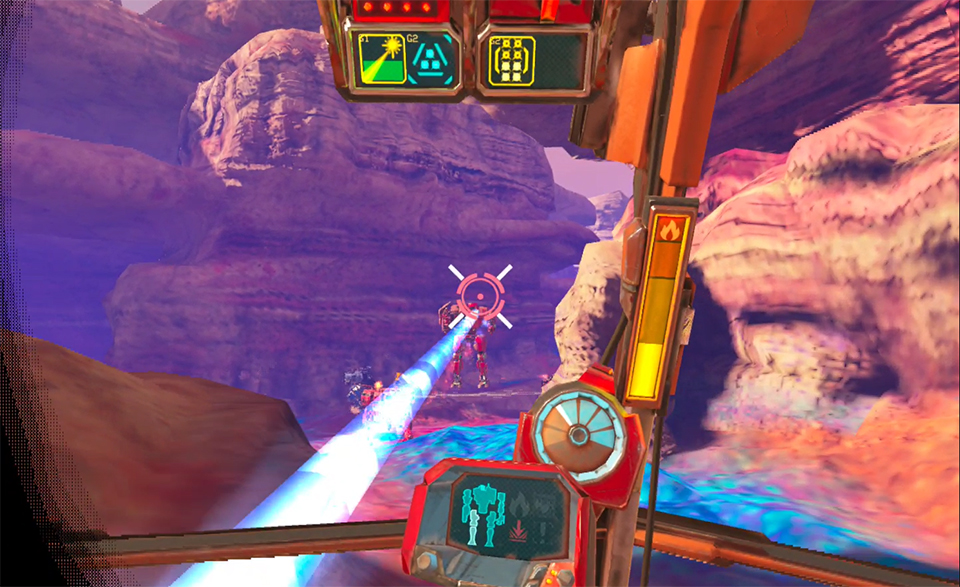 The multiplayer matches are absolute mayhem!

For those who have followed my VR journey, I fell in love with a little mech battler called Code 51: Mecha Arena for the PSVR and where that game was very undercooked, this feels fully realized offering up a fleshed-out, satisfying campaign and a decent multiplayer experience.  Vox Machinae is easily one of my favorite Quest 2 games and might just be up there as one of my fave VR games of all time and anyone who can play this should as it’s a ton of fun!

What would I pay?  This is $30 US and completely worth it for the single player alone.  The fact this has 16 player multiplayer is the icing on the cake and even though this is known for its multiplayer action, the campaign makes this one of the largest VR games on the market and delivers on satisfying mech action with some decent destruction and surprising comedic offerings.

Space Bullet Dynamics Corporation provided The VR Grid with a press code for this title and, regardless of this review, we thank them for that!