Ever since I played an early demo for Kayak VR: Mirage late last year, I have been waiting very impatiently for its release as the single stage I experienced blew me out of the water and it pained me to wait to play more.  Mirage lets you race Kayaks or just explore the photo-realistic environments that push the boundaries for what VR headsets are capable of when it comes visual fidelity. 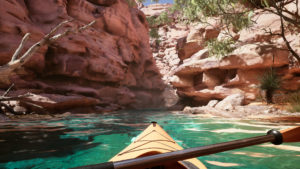 VR has never looked so good!

The controls here should be obvious as you will use each of your hands to grab a paddle, dipping either end into the water to steer your kayak in the direction you want to go.  You start off in a small indoor pool and can mess around or choose from a few tutorial options if you are unsure exactly how navigating a kayak works.  For those with the space, there is an option to strap the controllers to the ends of a long paddle or handle to represent an actual paddle more accurately though I didn’t try this as my play area is not conducive to me swinging a large pole.  At any time, you can select any of the 4 courses available and either race in them or just take in your surroundings using the free roam mode.  There are additional hidden objectives scattered around each map giving the players a little something extra to do besides just look around with a variety of racing options also available from racing solo, against ghosts of other players, friend or even against AI controlled ones that test your Bronze, Silver & Gold medal skills.  The near simulation physics will test your skills as one incorrect dip of the paddle could cost you dearly in time which means, to climb to the online leaderboards, you’ll have to practice.  Each race won’t take more than a couple of minutes and while the challenge of getting those best times is fun, for myself, that’s not the reason to play this. 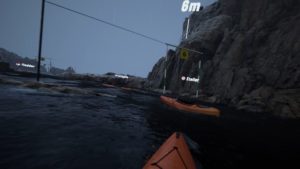 Kayak VR: Mirage advertises its visual presentation as having “Cutting-edge graphics that push the limits of what VR is capable of” and I cannot disagree with statement in any way as this is probably the most beautiful game I have ever played in VR and is easily the most realistic looking one.  I have a decent gaming rig and have played the best that VR has to offer but what’s here puts many of those titles to shame.  Each of the 4 areas looks nothing short of amazing with every map offering the ability to play during the day or night with one map, a Rocky cove with a lighthouse letting you play in stormy weather as well which is an absolute treat.  Dynamic real-time lighting and an attention to detail that I have never seen before make every single moment in this game a jaw dropping one.  During free roam mode I couldn’t help but just stop and take in the fish swimming beneath me or admire the water droplets as they left the cavern entrance above me, hitting the ocean and rippling outward.  Birds may fly overhead, or a dog will bark at you from a nearby shore or penguins might be chilling nearby as you float through freezing waters with chunks off ice you’ll have to avoid.  Everything appears to be rendered in full 3D giving an endless depth to the environments save for the lower resolution still images used for the background skies which did hamper the immersion of it all a tiny bit when I stared at them, though I just sort of forgot about those and preferred to focus on all that other beauty around me.  I could go on and on about just how gorgeous this game is and there are some settings to mess around with to make things look even better though that could come at a sacrifice of performance but even on lower settings, it still looks good, but if you can run it on max settings, there is nothing else like it.

Accompanying that stellar presentation is an equally impressive audio design which has fantastic 3D audio and matching sound effects for each stage. Each level has a unique and chill song to listen to you as you cruise around and they fit great, but for myself, turning off the soundtrack was the best way to truly experience exactly what Mirage is offering.  Just sitting in that canyon while water flowed around me, birds flew overhead and nothing but the sounds of the perfectly realized world hit my ears made those moments some of the most relaxing and chill ones I have ever experienced in Virtual Reality. 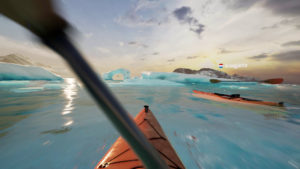 I’m not going to lie; I am in love with this game based solely upon the presentation and the fact there is some solid racing gameplay backing it just makes it more of a treat.  With that said, replayability is the name of the game here as with only 4 stages, on the surface that might not seem like much, but I’m telling you, once you are in the game, it’s easy to lose track of time as you explore every nook and cranny each stage has to offer, and you will want to do that. Those additional objectives will extend game time and there is a store you can spend in-game currency on to unlock new kayaks, gloves, hats and pool items with that currency earned by those bonus tasks as well as just playing as you earn money based upon how long you spend in the water.  There isn’t too much to complain about as the game is relatively small though each stage and all the mechanics have been refined to near perfection offering something special that needs to be experienced by everyone.  There are the occasional visual hiccups when water reflections might look slightly off, or the splashing water can look a little pixely but I’m honestly reaching when it comes to these complaints as the positives here far outweigh the negative. 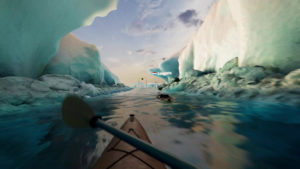 Every moment in this game is stunning!

I think just about any VR enthusiast will easily lose more than a few hours just checking out each setting and trying to master the art of VR Kayaking.  What makes this so great is that it’s also an easy title to show off as there is minimal VR experience needed to hop in and start paddling wherever you want to go.  Kayak Vr: Mirage nails what it feels like to kayak on a river or ocean and the fact it’s the most realistic looking game I have ever seen across any VR platform has me recommending this to anyone interested in seeing what modern day VR is capable of.

What would I pay?  At launch this is $23 with an initial 15% discount and honestly, for me, this is one of those must-buy titles and the kind of game/experience that will sell headsets to more casual players as it offers the kind of VR experience non-VR users think VR should be…does that make sense?

Better Than Life provided The VR Grid with a press code for this title and, regardless of this review, we thank them for that!