Have you ever wanted to cut hair in VR?  Well now you can in Bizarre Barber where you must slice and dice the hair off of the people and creatures coming toward you.  Not a lot of backstory here; it’s the apocalypse and the survivors need their hair cut.  You stand on a train platform with incoming trains on either side of you and must cut the hair off of the patrons putting their heads outside of the train cars or  the creatures that fly toward making this game, above anything else, aptly named. 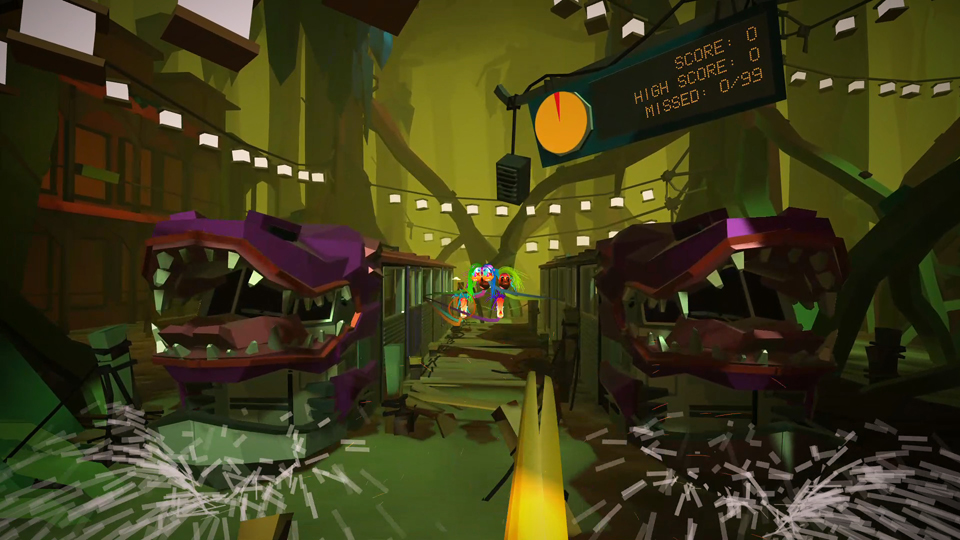 When the trains roll in, it’s time to get cutting!

Armed with a large pair of scissors, each handle is mapped to a motion controller so you must make exaggerated gestures as you open and close the blades.  The game is comprised of 13 separate stages with each being more challenging then the last and new mechanics are constantly introduced in almost every stage keeping the game from getting instantly momentous.  The 1st stage has you armed with just those scissors as the trains move slowly past you but soon enough speeds increase as do the power-ups which temporarily split your blades in two for some faster cuts, turn each hand into its own set of automated shears and a few other surprises.  Each stage scores you based upon how much hair you cut and rewards you with up to 3 stars, unlocking the next stage in the process.  Where things get tricky is you can’t touch anything besides hair so if your scissors touch skin, you get penalized and an accuracy counter on a sign nearby drops by just how inaccurate you were.  That meter constantly fills during the stage, but should you run into some tough spots or just nick to many customers, you can fail and be forced to start from scratch. 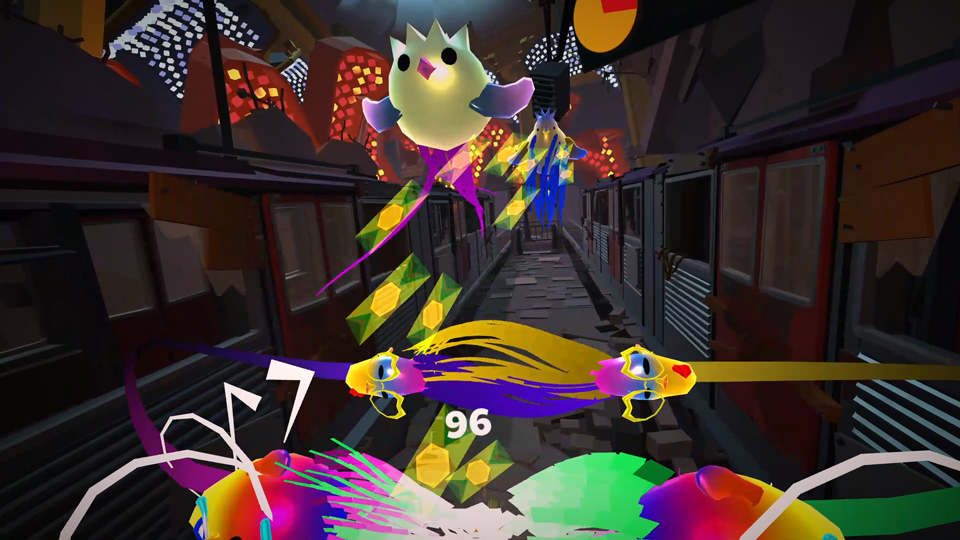 The game looks striking with a simplistic art style that does pop in the headset.  The trains that move past you look barely functional with broken windows and busted doors while in the background looms silhouetted post-apocalyptic settings showcasing some massive ruins or smaller areas of a city with the platform you are on also having seen much better days.  The people and creatures that come at your come in all kinds of neon hues making for a nice juxtaposition to your somewhat drab surroundings.  Those in need of a haircut don’t have much in the way of detail looking more like a few simple shapes smushed together to make a head or animal.  The people aren’t important as it’s the lovely locks that deserve all the attention with everything coming at you having thick strands of hair that move with the motions of the body they belong on and create some very difficult cuts.  It’s not the most visually appealing game, but the visuals due lend themselves to the overall bizarre nature of the game and it all just kind of works.

The music is best described as funky, psychedelic jazz(?) with each stage having its own track that does sort of fall into the background as you focus on all that hair cutting.  Every creature or person in the game is voiced by human actors that spout off odd noises depending upon just how well you trim their mane so humans might spout out ‘alright’ or ‘cool’ while birds make a ‘cluck cluck’ sound as if it were you doing a poor impression of a bird which I thought added some fun charm to this ridiculous game.  A few stages end with a bonus creature that grows hair as fast as you can cut it and just keeps telling the worst puns about the kind of creature they are but once again, I dig that kid of stuff and eye-rollingly enjoyed many of those awful one-liners. 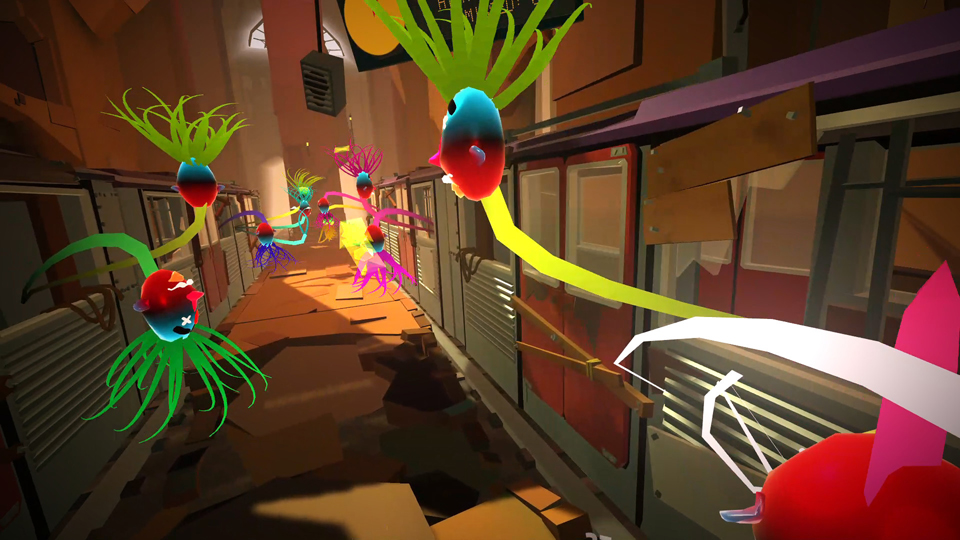 It’s a bizarre game for sure!

Bizarre Barber at it’s core is a game designed around 1 very simple mechanic making it very easy to pick up and play and the ever increasing challenge does give this game some legs, especially if your one of those people that needs to get 3 stars on every stage.  That said, after only a few stages, even with the subtle mix-ups in gameplay, the action did start to get a little on the repetitive side and I found myself needing to take breaks as I sliced my way through the campaign.  What’s also odd is that while the game does keep track of your score in any stage, once your back at the stage select screen, I couldn’t see any type of leaderboard, so I couldn’t tell which stages I had 3 starred or what scores I had until I dove back into a level where the scoreboard showed my previous best effort.  I think because of all the choices made in the game, it makes for a much better local multiplayer experience where you and your friends can see who can do the best in any given round as your pass the headset to one another. Stages do get very challenging and require you to make some very awkward motions with your hands but therein lies the challenge and the fun as it’s near impossible to get perfect scores on any stage. 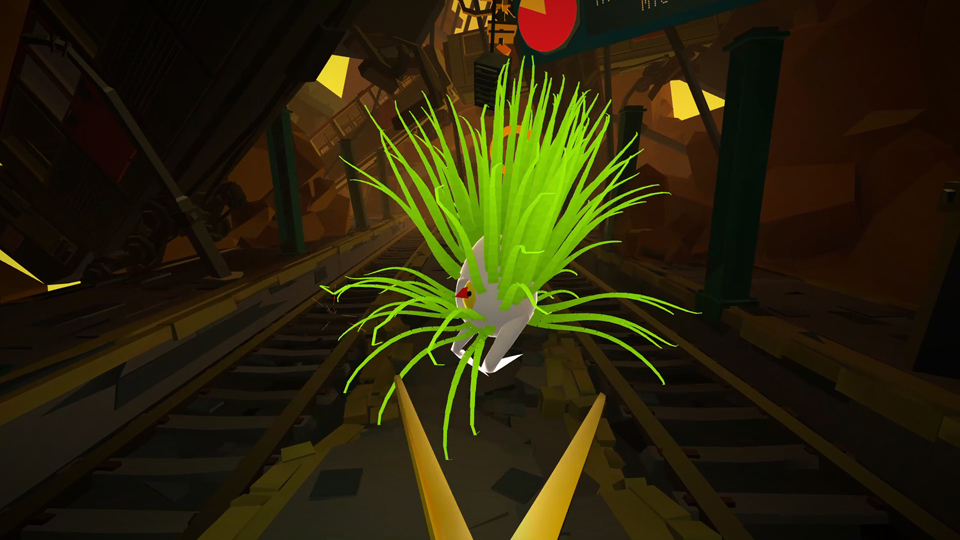 Bonus animals give you a chance to really up your score.

Bizarre Barber is above anything else a unique and ridiculous game that utilizes VR in a way that I’ve never seen before.  It’s one of those quick pick-up and play games that makes titles like Job Simulator addicting but focuses on one major gameplay element that does get a little old during long play sessions.  The name of the game is repetition and trying get those 3 stars  and with each stage taking no more then 3 or 4 minutes it’s not a big ask to dive back in, if you care about such things.  If you don’t the what’s here is a rather short campaign that’s fun for a few minutes but I don’t think will call back many unless you really like to challenge yourself.

What would I pay?  This is regularly $12 US and I know its nitpicky but the most I would pay is $10  as it’s not the type of game that I really want to play over & over.  It’s fun for a bit but just doesn’t have that long lasting appeal…at least for me.

Synesthetic Echo provided The VR Grid with a press code for this title and, regardless of this review, we thank them for that!