Let’s just say you are a failed rock star, having all the passion necessary to get to the big leagues but you don’t have the talent and unfortunately during one of your gigs, an accident occurs sending you very quickly to hell.  It’s here where you meet the Devil who offers you all the fame and fortune you desire but for a price, you need to destroy and wreak havoc upon the hotels you stay in and the more damage you do, the more opportunities you have to cause more! 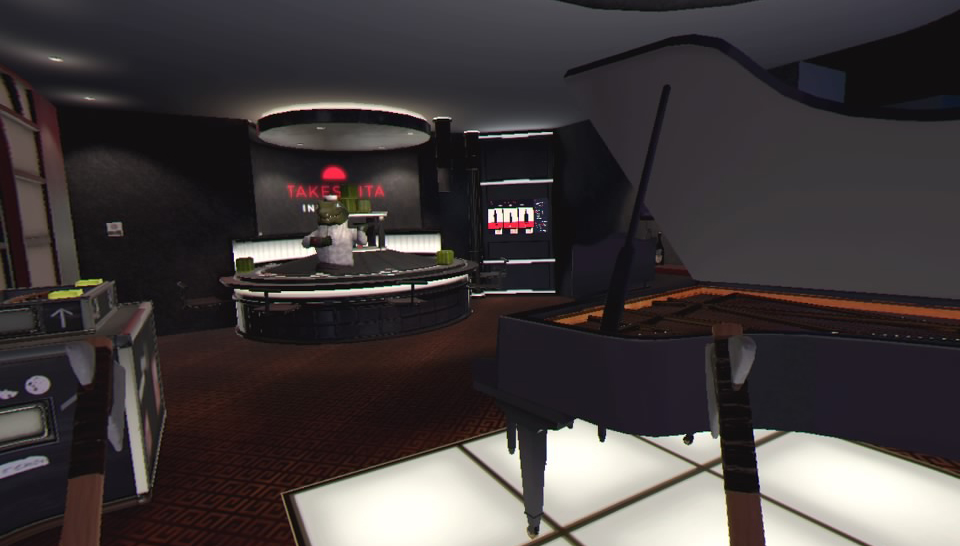 It’s about to get messy in here!

Armed with 2 motion controllers, it’s up to you to navigate each hotel room and destroy whatever you can.   Comfort settings are in place from click-turning and teleport to full locomotion so you can tailor the game to your liking.  Before each stage begins you can choose your rider, which are items you purchase in a shop using the money you earn each time you play.  Where things get a bit trickier is that at the beginning, you can’t really do a lot of damage as you don’t have many weapons available at your disposal.  Adding to the challenge is the time sensitive nature each stage plays out because as soon as you start wrecking stuff, management becomes aware of your shenanigans and sends housekeeping to check things out.  This is where things get tricky as you need to be at the door when she arrives and keep it locked as she tries and opens 3 different locks.  Should you fail and she tries to come in, you have no choice but to hit her, taking away from your final score and loot as well decreasing the amount of time you have in the stage as the situation escalates.  Getting rid of the maid will now summon the manager who is a little faster with those locks and after him is security and you need to leave the room before they arrive as getting caught will also ruin your score.  You are scored based upon total damage but the factors I mentioned above hurt as you’ll have to pay lawyers fees if you hit anyone as well as hospital bills for any damage you do to yourself.  Each stage/hotel room has its own specific challenges and these need to be completed to gain infamy.  Those challenges could involve destroying specific items in a room or earning ‘X’ amount of dollars before the maid arrives and a bunch more and when you complete those, you also get more loot.   Infamy is what you need to unlock more rooms with each successive hotel offering more opportunities for destruction.  Money earned can spent in the pawn shop for items you can add to your rider.  As you upgrade your rider, destroying stuff also becomes way easier as you unlock more durable and destructive items.  You start off with just a foam finger but soon enough you’ll have hatchets, guns, boxing gloves and a host more items with some letting you cause ridiculous amounts of damage. 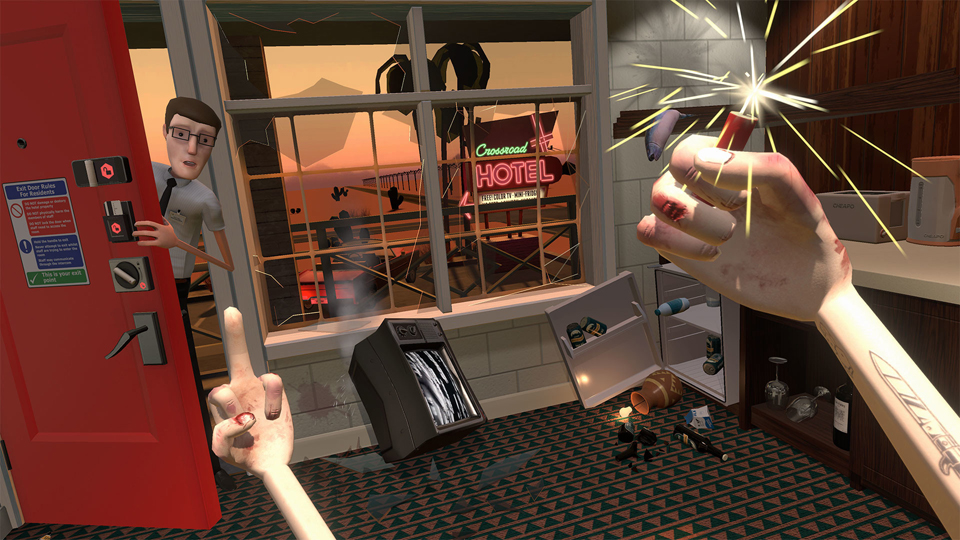 This guy ALWAYS gets in the way of the fun!

Beyond the campaign is purgatory which contains a host of mini-games which are actually a lot more fun then I thought they would be.  The 1st is a small rhythm game where you need to hit beats happening on a screen all around you.  Another one is a hedge trimming activity that arms you with an electric trimmer and asks you to recreate a shape like a potted plant or foam glove.  The 3rd has you in the bottom of a pool with a crashed car with evidence floating in the pool all around you and it’s up to you to put all that evidence back in the trunk before the cops arrive.  The next requires you to destroy a vehicle within a few minutes with the last being a bizarre dance show you must toss errant items onto the dancer with extra points awarded for accuracy.  Besides purchasing items for your rider, you can also buy outfits for your character to further customize the game to your liking as well some additional items like rings or a cup that let you take a little less damage during any stage.  There’s also a lobby stage which slowly gets populated with new items to mess around with the further you progress through the campaign.  A party mode is also available that can be played solo and puts you in a series of mini stages from the main campaign as well as those other purgatory games and published your scores on global leaderboards as well as letting you know which local player did the best. 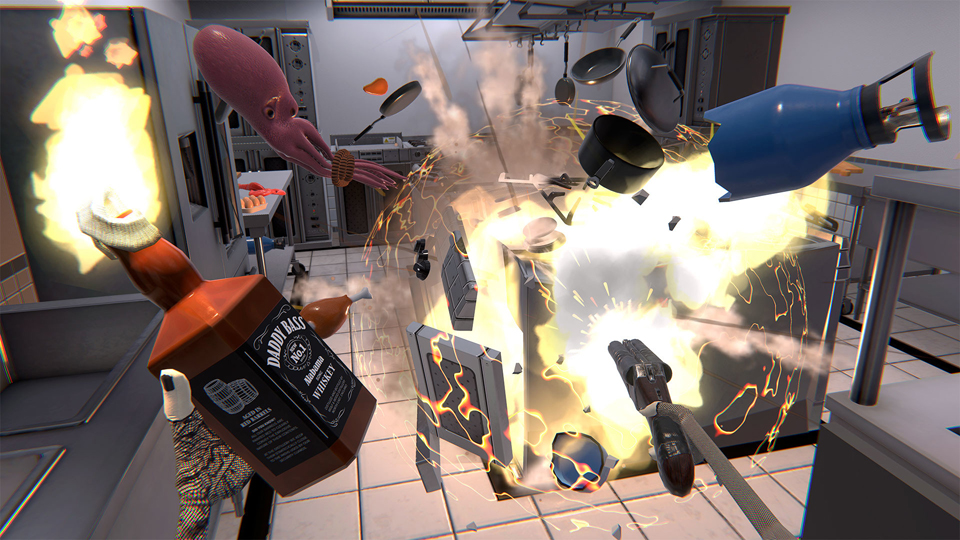 I killed myself soooo many times in this room

Hotel RnR is very cartoonish which works to its advantage as you will see a host of different locales from a dingy motel, fancy loft, garden and few others with every hotel looking and feeling incredibly unique.  The character models are all incredibly skinny and even the overall detail on anything is lacking but that lack of visual flare is more then made up for the amount of stuff you’ll see.  Every room you visit is littered with all kinds of stuff be it beer bottles, plates, flowers, pictures and a host more “common” hotel items.  A few stages into the campaign and you are visiting more exotic locales with a virtual bowling alley, clay pigeon launchers, Asian influenced lofts complete with animatronic crocodile chef’s and more whacky scenarios.  There are 6 separate stages in total, some with multiple rooms, so while you will see the same stages countless times, revisiting them with a new arsenal may reveal new ways to further wreck your rooms.  The weapons are the star of the show though initially you’ll only see a few them as all the coolest ones cost a fair bit of coin to purchase.  That said, every new weapon gives you new ways to break stuff so whether your just smashing stuff with a pair of tomahawks, exploding things with fire crackers or just taking an Uzi or samurai sword to anything in sight, the rampant destruction is your reward.  Destroying walls, statues, tables and anything else you can and then taking to second to look around at your path of destruction is typically very, vary satisfying.

On the audio side you’ll hear the same generic rock track over and over as you ruin the hotels with the audio effects being front and center in regard to keeping you entertained.  The maid and manager, when arriving at your door will utter some sort of humorous one-liner before trying to force their way in with all the destruction sounding as it should.  I won’t go into depth in, but everything here sounds great, and fits the game perfectly. 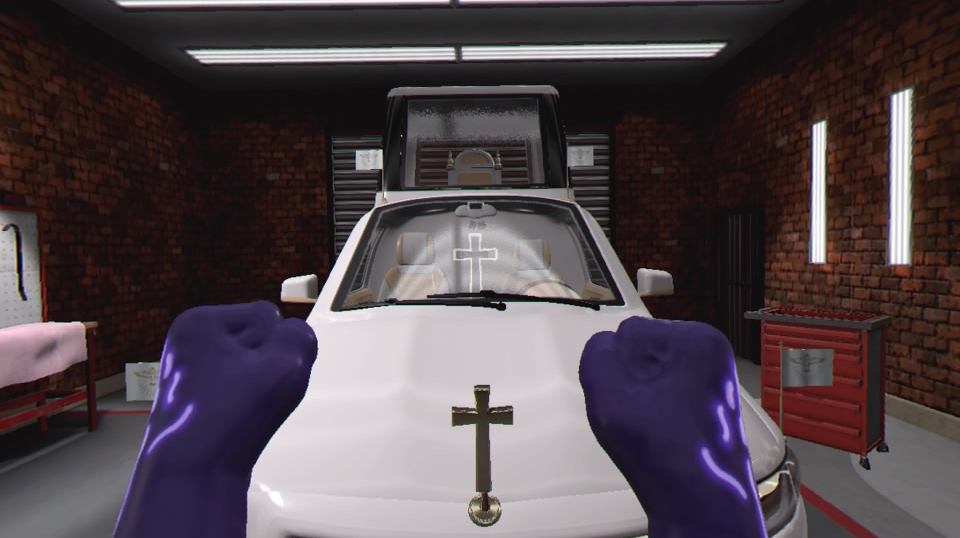 There’s a lot to chew through in Hotel RnR and my initial impressions of the game were somewhat lacking.  It took probably around the 2-hour mark before the game really started to open up in regard to the fun-factor.  I don’t mean I was never having fun, far from it, but I just got bored after around 20 min or so and just found myself taking frequent breaks.  For a game that is little more then smashing everything around you, there is a lot of depth and care that went in here.  Each stage’s individual goals offer a lot of challenge and fun, though can offer frustration as well as you just won’t be able to complete some objectives until you have purchased the proper item(s) to do so.  Some of the objectives require you to not take any damage which can be insanely frustrating as when things fall, explode or crumble, some funny physics could cause you to take an errant hit, ruining your chances at that run.   That said, commit to the objectives and soon enough you’ll have the infamy and money needed to visit all the hotels and purchase all the crazy weapons and suddenly being doing 10x more damage then when you had first started the game.   Every few stages you’ll be given a safe code which can be used once in any hotel room, offering up some type of weapon or drug to further you efforts  Those drugs aid you with a variety of comedic effects from giant hands to telekinesis, and a bunch more which also spices up the gameplay. At the time of this review I have unlocked all the rooms but am still struggling to complete many of the stage specific goals, some because they are very challenging and others because I’m not totally clear on what to do, but I haven’t given up yet.  Throw in those mini-games, party mode, weapons range, upgradable weapons, free-mode and even just the backstage area and their is a lot of content to get through. 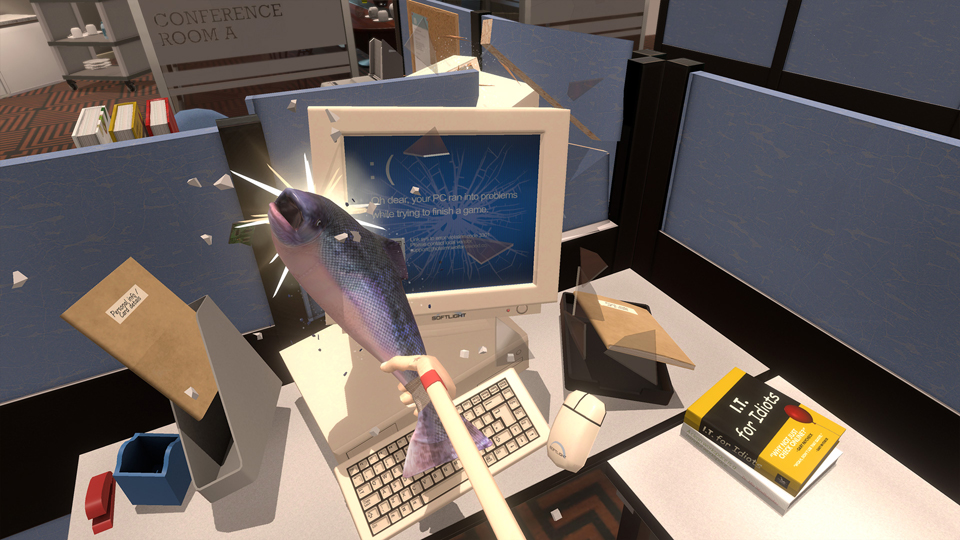 Hotel RnR is definitely a treat and I think fans of more free-form games like Gorn or just messing around in Job Simulator will really dig this.  It’s a nice way to let off some steam and despite initial appearances offers a ton of challenge and reward as you get more and more famous.   With that said, it does have a few shortcomings that some may be able to look past but will affect others like myself, causing bouts of boredom and frustration.  Even with my misgivings, Hotel RnR is a fun little VR sandbox title that let’s you unleash like few other games and the plethora of content in here will keep anyone entertained for hours upon hours.

What would I pay?  This is easily worth the asking price of $20 US.  It’s not perfect, but checks off more then enough boxes to make this a recommendation if you just like screwing around in VR

Wolf & Wood Interactive provided The VR Grid with a press code for this title and, regardless of this review, we thank them for that!