Airborn is an odd little mixture of genres as this largely plays like Superman flight sim game save for the fact that instead of any powers beyond flight like laser eyes or freeze breath you are armed with 2 guns and must dispatch the hordes of enemy ships and drones that get in your way.   There’s no story or plot to concern yourself with, just master your abilities and see just how long you can last against more and more challenging waves. 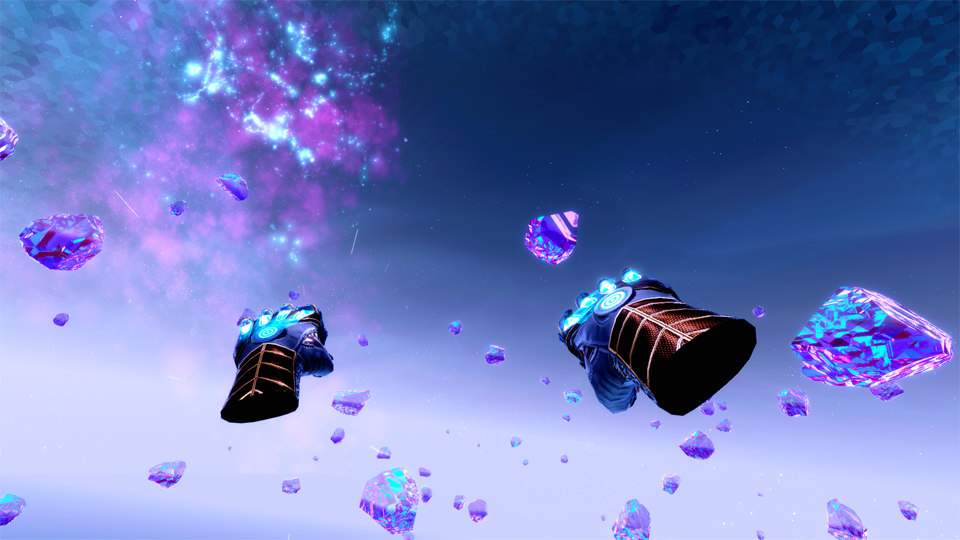 Mastering flight is the key to success!

I recommend playing through the tutorial on this one as there some nuanced abilities and controls that might not be readily apparent if you just dive into the game.  You can only fly, with the direction of flight determined by the angle of your hands.  The further you put your hands out (Superman style) the faster you will go while punching the air in any particular direction with both hands will give you a short boost, allowing for some quick stops and turns.  To bring your guns out, you simply press a face button which summons the guns to your hands.  Dual wielding is the easiest way to dispatch the variety of foes you’ll face though flying with 1 hand while shooting with the other is a skill that should be mastered.  When you arm yourself, that hand, or hands, is no longer used for flight so depending upon your direction of travel, momentum and gravity will determine where you are careening until you switch back to flight mode.  Your guns also have a special mode that swaps your standard laser pistols for more powerful weapons like shotguns or focused lasers which can be chosen from in the loadout menu.  There is only 1 mode besides that training and that is combat mode which puts you against steadily more challenging opponents with the goal being to last as long as you can.  Every time you play accrues you experience which allows you to purchase upgrades at the armory so the more you play, the more powerful you’ll get turning this into a sort of wave shooter rogue-like. 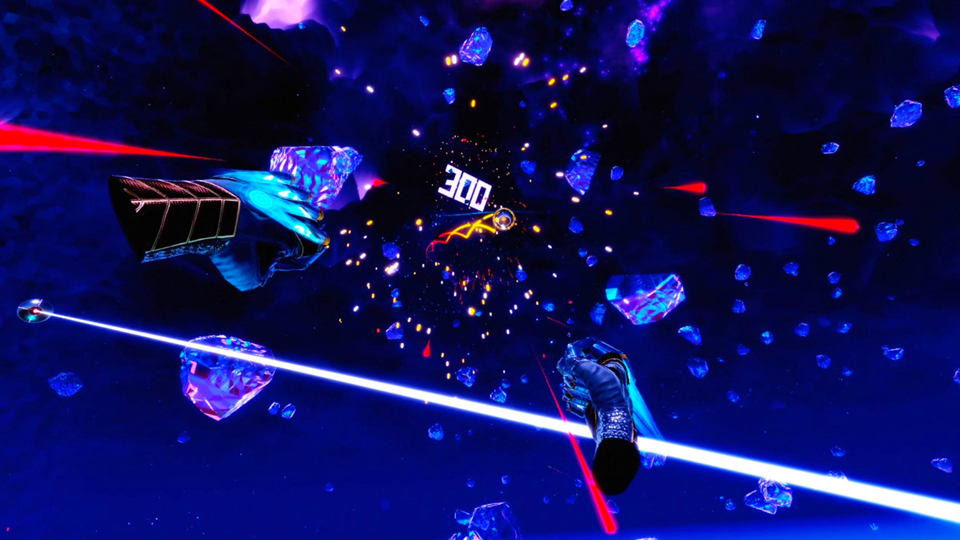 Airborn looks pretty slick though unfortunately you only play in 1 environment which can also look stark at times though the background does swap out different hues and designs.  The play area is fairly large with a massive dome indicating the edges of the stage and a flat blue grid acting as the ground.  The star of the show is the combat combined with flight and the sky is littered not only with enemies but large asteroid type obstacles which you can use to your advantage as many of the robots you fight don’t have the same level of maneuverability as you.  The enemies you face come in many forms from simple, stationary globes that fire beams to satellite shaped ones that pursue you relentlessly, BSG style ships that make suicidal explosive runs at you as well some insanely larger boss battles that are thrilling as their size of their attacks matches their scale..  Assisting your senses, and perhaps to a help alleviate motion sickness, are little lines that appear before you, indicating your direction of travel.   Your hands and weapons are very detailed so while you are limited to one stage only, the presentation is enough to never offend and even impress when the action gets hectic.

Sound design is on point with an upbeat and intense electronic soundtrack that feels ripped right out of an action film and, in my personal opinion, fits great with the fast-paced action.  The 3D audio is a standout and is wonderfully implemented as often times, the only indication an enemy might be on my heels is the sound of their engines behind me.  Those suicide machines I mentioned earlier come at you so fast that the sound of their thrusters may be the only sign they are close forcing an immediate direction change lest you take damage with the other mechanical hordes all spewing out their own unique effects. 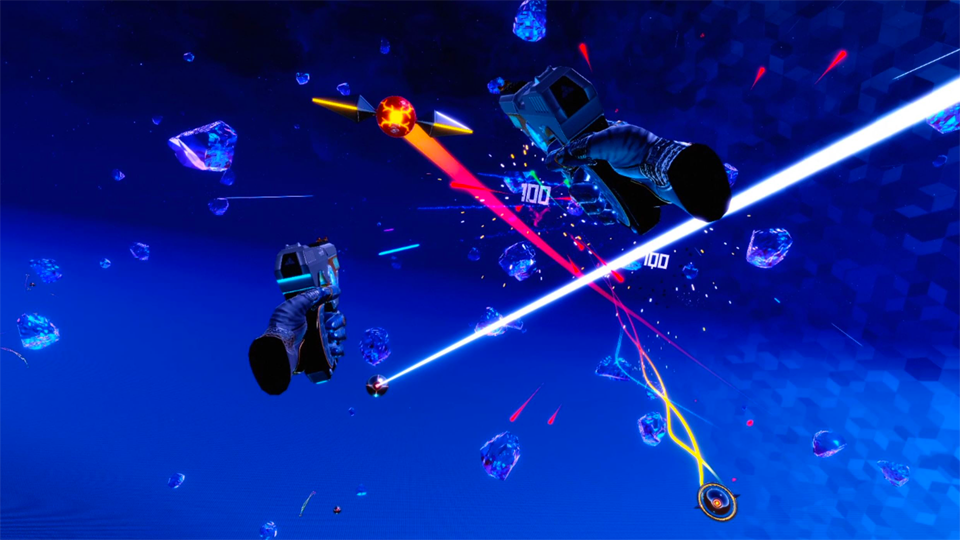 The variety in your opponents always keeps you on high alert.

Before I start getting into my issues with this game, I want to make it clear that I am having a blast playing it.  That said, the overall lack of substance here might turn people off.  The singular mode feels very restricted and even though the goal here is level up and progress further, it does start to feel the same after awhile.  That’s not necessarily a bad thing as by design, I think this is meant to be played in smaller doses.  Hop on for a round or 2, see how you do, accrue some experience, possibly level up and try again another time.  It’s that rogue-like formula that makes this game addictive, but the single stage in here really hammers home that feeling of ‘been there, done that’.  I would love to see more randomly generated environmental obstacles just to spice up the scenery a little bit.  Also, the progression system in here does demand a fair bit of grind though each go has some specific objectives to shoot for that bump up your score and experience.   If you can handle that grind and don’t mind working towards better perks, Airborn offers some of the most satisfying VR gameplay I’ve experienced in recent memory.   Cruising through the skies, only to hear the roar of a nearby enemy forcing you to change direction, switching to your guns and trying to line up of the enemies behind you while sailing through the skies on your own momentum is endlessly satisfying.  Each hit taken will knock off a bar of health though some enemies will drop little scraps of health you can pick up if you fly close enough too them.  The additional abilities may take time to get, but each one activated makes your next go a little easier like increasing the range to nab those health pickups, increasing you fire rate or adding laser sites to your weapons.

The war machines are next level opponents!

Airborn is a bite-sized VR treat that is worth picking up even if you only get an hour or 2 of entertainment out of it.  For those a little more dedicated, this will test your multi-tasking and combat skills like no other and once you play for a little bit, you’re almost never given a moments rest making this one of the more intense shooters I have played in awhile.   For those that care, there are also global leaderboards to prove just how good, or bad, you are.   The flying feels fantastic, the dual wielding is awesome, the combat is intense and none of that would work outside of the headset making this a wonderful little VR gem!

What would I pay?  Thankfully, this experience is priced right and at $12.49 US, I say it’s a must buy for anyone looking for a fast, fun and frenetic shooter.

Still Not Sure provided The VR Grid with a press code for this title and, regardless of this review, we thank them for that!