I haven’t played too many wave shooters in VR as the genre has been traditionally an overview type affair with the player typically playing the game from an overhead view looking down upon tiny NPC’s, which just doesn’t quite utilize VR the way many people expect or want.  Captain ToonHead looks to merge 1st person action with this tried-and-true genre by placing you on, and above, the battlefield, taking out the forces of the Evil Nicolas Vorhees, who is out to destroy Earth by harnessing the power of the Enercubes for his weapon of mass destruction. 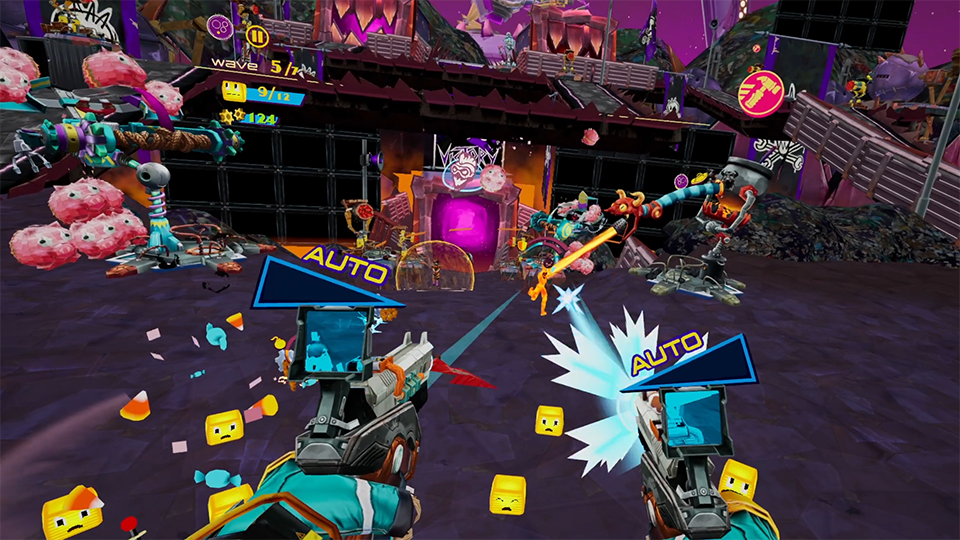 You are the #1 defence in this game.

This is a dual-wielding shooter that has you teleporting to each of your defense stations (or toonrets), which are created using the loot accrued from each enemy’s demise and collected by your 2 Turbo-Mjolnir hammers which are also used to upgrade your toonrets so you’ll be swapping your guns and hammers quite a bit.  Once you have enough loot, you simply look at the next empty station you wish to place a defensive building on, select it from a wheel menu and release the thumbstick, placing said defence and allowing you to than move to that station as well, creating a sort of on-the-rails type shooter.  Like any good tower defence title, as you advance through the story, more defences, upgrades, and abilities become available which is great as the enemies come in more powerful waves.  They’ll spawn from a select point on the map and navigate a path toward your Enercubes, whereupon they’ll pick them up and take them back to their base though some enemies may just fly away with them so it’s best to stop the punks before they get to those cubes.  Each level only allows you to place defences at specific points on the map so there are strategy elements at play to not only ensure you maximize your defensive capabilities, but also make sure you can navigate around the map for easier shots at each stage’s onset.  After a few stages, various upgrades and abilities become available in your home base that are a must as the game gets continually more difficult.  Your initial blasters do minimal damage with each shot needing a press of the trigger so increasing their fire power & fire rate is key to your survival as failure forces you to repeat said stage from the beginning.  With all of that in mind, it’s just a matter of getting through each stage, advancing the whacky story and saving the day! 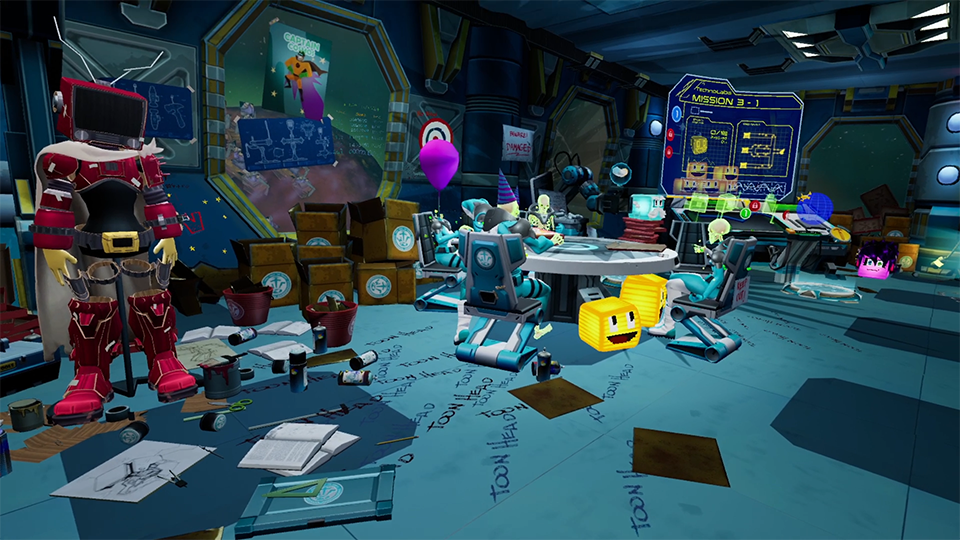 Captain ToonHead has a very cartoonish presentation which looks alright, but don’t expect to be blow away by this one.  You’ll start off in your spaceship with your compatriots who meet an untimely demise, leaving you as the sole defender from Vohees’ forces.  The game takes place almost entirely on a garbage planet and as such, the bulk of the environments carry a rather dull color palette full browns and greys that fit the planet, but not necessarily the over-the-top light-hearted comedic themes.  Enemies appear from a large portal at one end of the map and steadily make their way towards the other side, coming in a wide variety of forms.  The basic “punks” are mohawk wearing robots that move with intense purpose with robot chickens showing up soon enough that move much faster and are much harder to shoot.  Cyborg T-Rexes present real problems as they stomp their way past your defences and can take a ton of damage, Land Sharks and flying cats can overwhelm your defences though thankfully, your toonrets also come in equally whacky and devastating forms.  This can be a pig launcher launching explosive piggies, a snowman mounted freeze gun, hot sauce spewing canon and a few others, all of which are more or less effective against specific troops and troop formations.  It doesn’t take too long before the enemies come in overwhelming numbers and the activity around you gets intense as your defences unleash and the enemies come from high and low in ridiculous numbers.  Everything looks fine up close, but once enemies get too far away from you, they are less animated and look like they only have 2 or 3 poses or frames for their animations and look like a very poor stop motion picture as opposed to a fully realized game.  Otherwise, everything in here looks perfectly fine and gets the job done but that’s about as far as that goes. 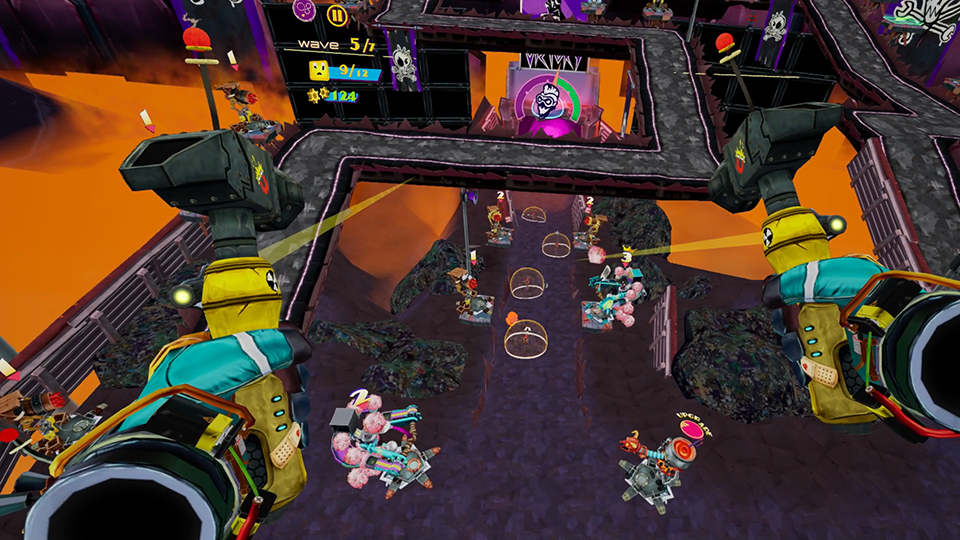 Sound wise, everything in here works SAVE for the comedic stylings which I felt just landed so flat that it was grating.  I appreciate lame dad jokes, I really do, but what’s in here is the equivalent of beating a dead horse with jokes that just aren’t funny and are repeated relentlessly to the point where I just wanted to mute the story.  That delivery is hampered by the voice acting which had poor timing and made, imo, some odd casting choices, leaving it all feeling disjointed.  When in the action, sound effects fit and are in some cases needed as in the later stages the only sound that an enemy has gotten past your defences is the cries of the Enercubes as they are being abducted.  3D audio is surprisingly well done in here and greatly appreciated as teleporting to any toonret will reset your forward-facing position, which can be disorienting, especially if you accidentally move to the wrong defence.  Accompanying the action is a friendly, albeit forgettable soundtrack that fits the overall theme, falling into the background and letting the sounds of the action carry the weight in the sound department. 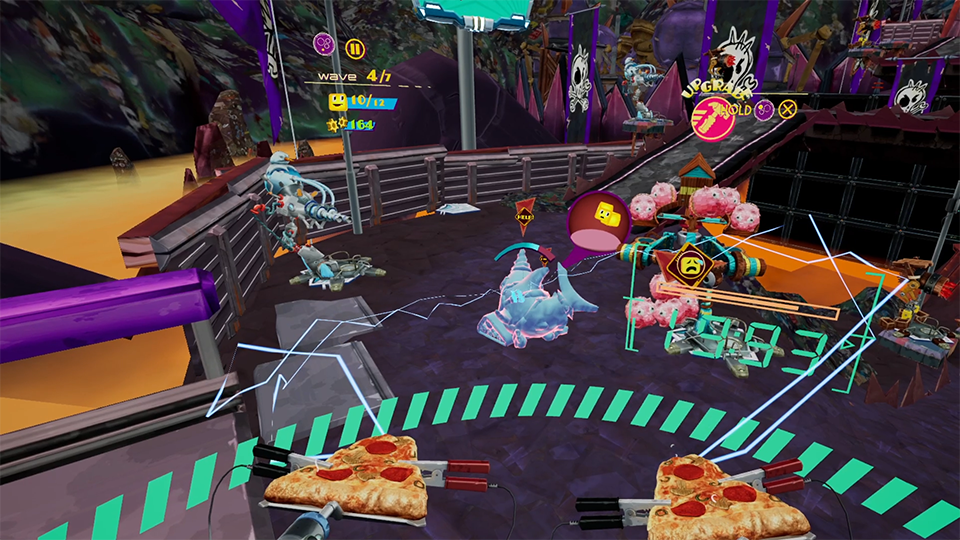 If the situation ever gets this dire, you need to rethink your strategy!

Captain ToonHead checks off most of the boxes to make this a competent 1st person/wave shooter hybrid but the few boxes it doesn’t really hurt the game.  Your starter pistols require constant trigger pulling to fire every shot which makes perfect sense, but in practice it became ridiculous to be constantly pulling my trigger as said weapons did minimal damage and fingers began to hurt.  Thankfully, after the 2nd stage, the option to upgrade gets rid of this but it was nothing short of fatiguing.  As I said, the story was grating which wouldn’t be too detrimental as the story really is secondary to the gameplay but the problem with the gameplay is that it’s rather repetitious.  While new abilities, weapons and upgrades become available throughout the campaign, from the 1st stage to the last, each level feels the same, there’s just more to account for.  New enemy types, bigger maps, new weapons, more Enercubes and more foes and while that is all stock for the genre, I found myself beating a stage or 2 before taking a break as it all just felt like the same thing again and again.  It’s not bad, but it all just feels redundant with the total package being serviceable, but equally underwhelming. 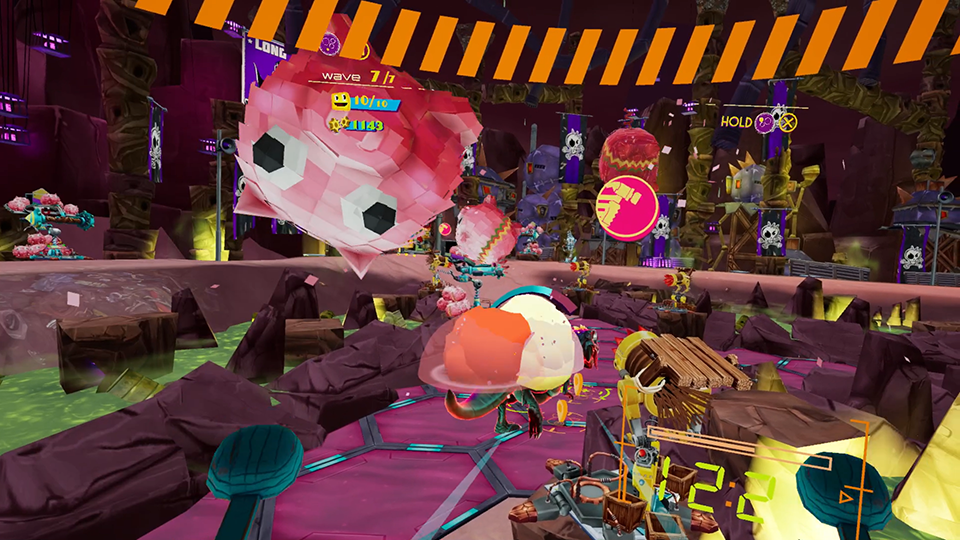 Captain ToonHead does the Tower Defence genre right by VR with it’s mixing of classic genre tropes combined with 1st person shooting action.  Outside of the solid gameplay is a lacklustre story that fails to be be funny or engaging leaving little reason to play outside of just challenging yourself to get higher scores on each level.  When it’s utilizing its strengths, it’s good fun but it can quickly feel repetitive and oftentimes easy plus with the story missing many of its comedic marks, Captain ToonHead just feels like another wave shooter with a few additional VR twists.

What would I pay? This is $25 US which seems a tad high.  There is plenty of content in the game as the campaign will take a few hours to get through with plenty of stuff to unlock.  That said, I never felt truly attached to story or characters and when combined with the repetitious nature of the game, made this feel a little less engaging than I’d like.

Teravision_Games provided The VR Grid with a press code for this title and, regardless of this review, we thank them for that!