I always look forward to established genres making their way to Virtual Reality as it’s great to see how developers utilize the immersion VR offers.  Little Cities is the latest in the City Building genre, and the 1st in VR (I think), to deliver that classic ‘Sim City-esque’ gameplay we love but designed to be a little more casual and laid back. 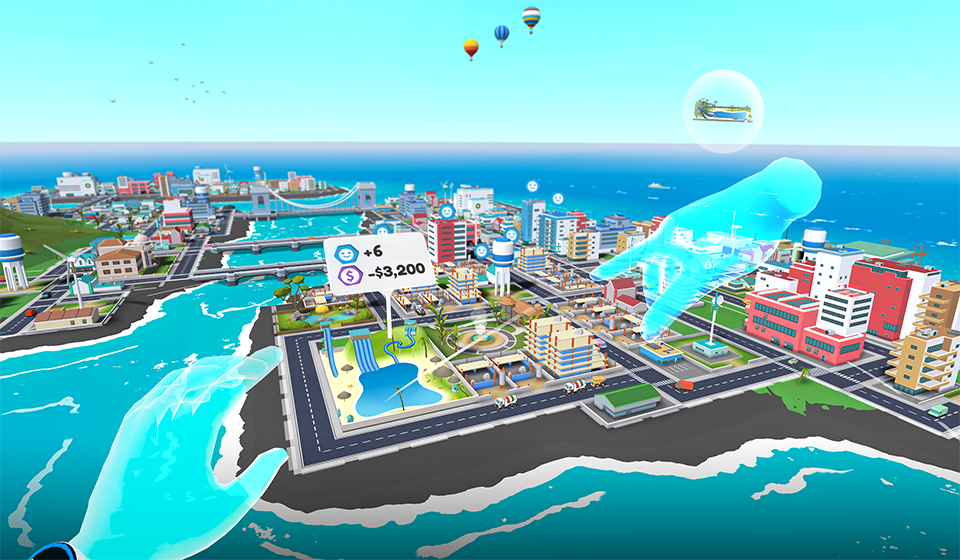 Building a city is quick and easy.

Little Cities starts you off on the 1st of 6 islands and brings you through a quick tutorial highlighting the controls and movement options before leaving you to build your 1st Metropolis.   Options for blinders and click or smooth turning are available with the game asking you to physically move around the map if standing or, if sitting, you can drag yourself around each stage.   There are core building types you’ll have to continually place and balance and those are residential, commercial, and industrial which supply the populace with jobs and homes.  From there you’ll need power and water and as you expand your city, it will level up, unlocking standard buildings as well as unique structures for that stage.  You’ll have to ensure there’s enough police and firefighting presence, make sure the populace has access to medical and education facilities and a host more selections that reveal themselves the further you progress.  Each stage has sections of the map blocked off until you expand and build enough stuff with some stages having unique obstacles that require special building options to deal with them like dust storms, mountains that block cell signals and even a volcano.   Money is earned every week (roughly 25 seconds of game time) and to ‘finish’ a level, you need to maximize your level, unlocking the City Hall Building.  All the details in regard to income, population count, resources needs and any notifications are handled by your smart watch and can be easily accessed by simply looking at your left hand.   It can feel a little complicated at first, but it really didn’t take me too long at all to be comfortable with the game loop…maybe a little too comfortable. 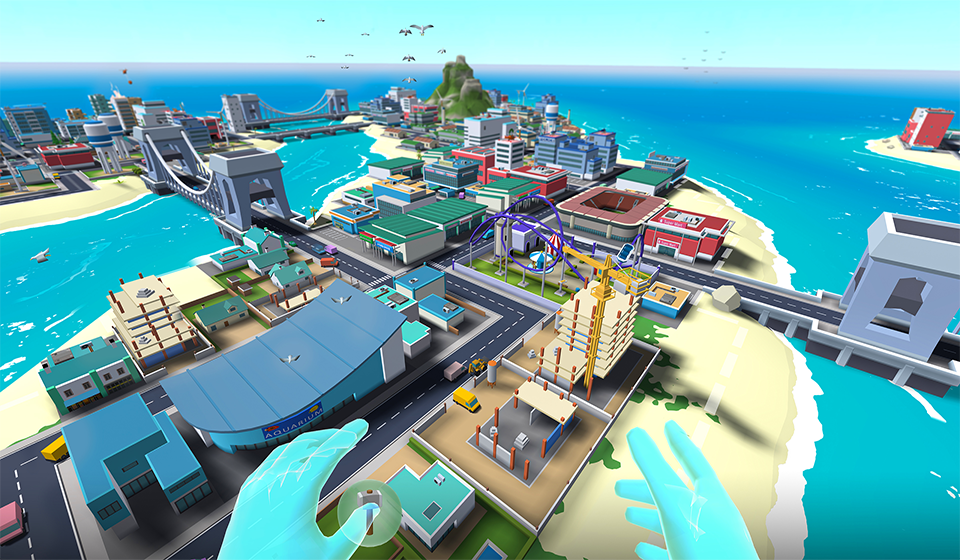 Presentation is key for City Builder games as it’s always satisfying to not just see your city grow but watching the population flourish and carry about their busy lives.  In Little Cities you don’t get to see little people walking around but instead vehicle traffic represents their activities.   When you create a new building, little construction trucks will drive over to it and carry said building through a series of quick animations before they are built.  As you build roads and expand the city, traffic will increase in those areas with fires popping up here and there that will call the firehouse to aid or crimes being committed that elicit a police response.  Flying overhead over will be planes, balloons and birds that keep the hustle and bustle of the whole city feeling authentic, if not a bit simplistic.  You can zoom in and take a closer look at anything you want though this is somewhat limited as the view of the map never fully changes from being an overhead one unless you lean right in.  Buildings all look fine, carrying enough details to indicate which building type they are though anyone looking for simulation level visuals will be disappointed as most don’t carry too much in the way of realism but when your city starts to take form, it looks authentic enough, especially from a distance.  Everything in here looks pleasant and intuitive making for a very casual and inviting city builder with broad appeal. 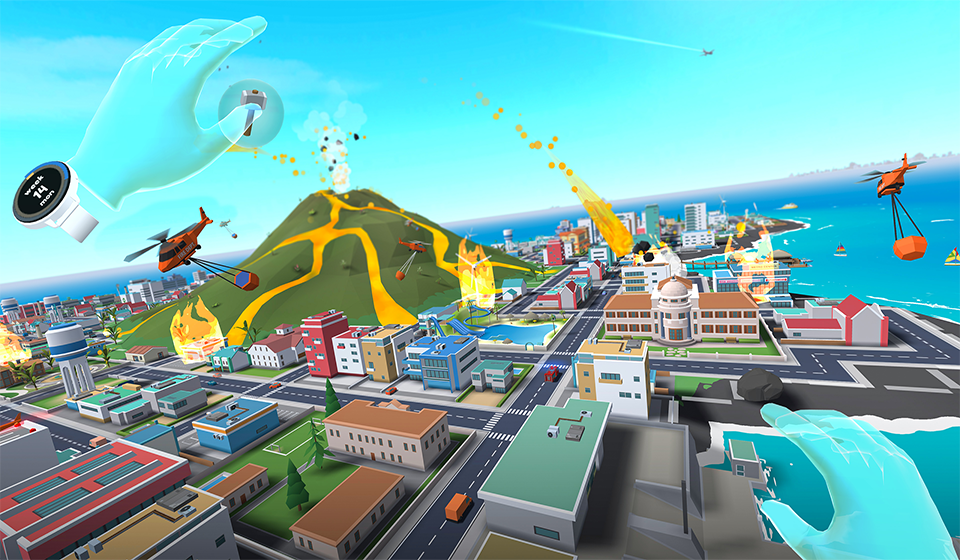 Volcanoes cause a little trouble, but really aren’t that big of a deal.

When new structures are built, you’ll hear the sounds of construction and zooming in on any special buildings will have effects unique to them playing, like airplanes taking off from an airport for instance, once again adding enough realism to the little diorama worlds to make them feel lived in.  In fact, the 3D audio is fantastic as I often heard the approach of hot ait balloon or airplane flying close to my head and could even hear the distant sounds of a firetruck responding to a fire making every city sound lived in and busy.    I always refer to that friendly background music as ‘elevator music’ and that description is as apt as any for what can be heard here with some very chill, almost folky instrumentals adding to the overall friendliness of this little game.

I haven’t played a ton of city builders in my time which made me both a little excited and a little leery to jump into 1 in VR.  I really can’t say why I’ve avoided them up to this point as I’ve always had fun with the game type, I just never really felt the long-term draw of the genre.  Little Cities starts of easy and is simple enough that anyone can jump in and figure out how the game works in mere minutes.  Unfortunately, that simplicity might also be the games biggest hindrance as I often found myself waiting on the game to get my next unlockable building.  The core goal is to expand, unlocking that next level that will reward you, typically, with new building types and while balancing all the other buildings, utilities and facilities is still important, doing so was never challenging as your wristwatch easily indicates which types are needed to grow your population and keep them happy.  After the 1st stage, I had this game loop down to a science, creating roadways, building districts, ensuring I had enough water and power and most importantly, leaving gaps in my city for those special building types.  I would build to a point and then just sort of waited for the game to catch up to me, building as needed, but really just waiting for the next unlock.  Once I got it, I would place it, or them depending on if more than 1 of that building was allowed, add a few more basic buildings and wait again.  Balancing residential, commercial and industrial buildings is very easy and I truthfully never struggled once in this department as almost nothing detrimental ever happens.  There are no significant natural disasters to speak of (the volcano might destroy a building or 2), no economy to balance or resources to farm or run out of, just build a city, expand and build some more.  It’s inviting simplicity is, in my opinion, it’s biggest downfall as it’s super easy to pick up and play but once I figured out the game loop, it just became all to easy to expand my cities as the same formula for the 1st stage works in every other one.  It’s not bad and each of the 6 stages does offer some different challenges, they just aren’t that challenging leaving me with a game that was fun, but kinda dull 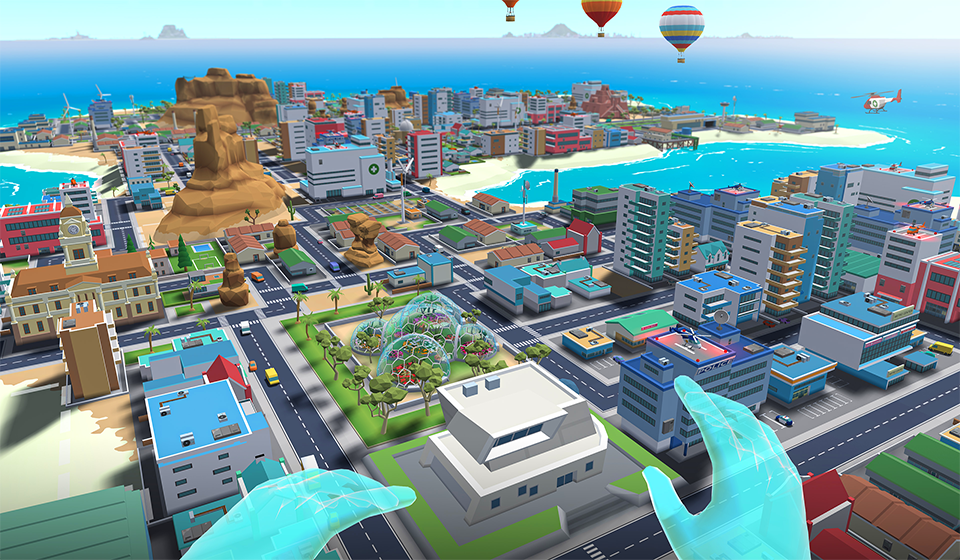 Keep the populace happy and your city will flourish!

Little Cities advertises itself as an accessible and relaxing city builder and it is exactly that.  There is no real pressure to build or crisis to handle, just build as you like and if you screw up, there’s no real punishment, just demolish and place what you need to and keep expanding.  It’s great for casual players who are just looking to dip their toe into the genre or are looking for a chill VR title, but for anyone looking for challenge or a more rewarding city builder, you might want to look elsewhere.

What would I pay?  At $20 US, the content value is here as it will take 6+ hours to beat the game but that’s largely due to the repetitive and slower-paced game design.  It has its moments of fun, but once you figure out the game loop, the rest of the game is little more than rinse & repeat gameplay with very little in the way of reward outside of doing it all again on another map.

nDreams provided The VR Grid with a press copy for this title and, regardless of this review, we thank them for that!