If someone said to me describe Drop Dead in one word, that word would be “Fun”. Simple but Fun. OK, two words! Very reminiscent of the classic House Of The Dead and more of a lite and friendly Rush Of Blood. This is very much an on the rails shooter that involves a multitude of zombies, a good selection of weapons and satisfying gameplay which is intuitive and exciting. It’s a good release after a particularly taxing game or  if you just feel in that mood for a no thrills shooter. 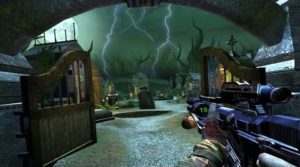 The entrance to your graveyard…and your DOOM!

That story involves a zombie apocalypse (what else?) and it’s up to you with your cybernetic and time travelling abilities to send their undead butts back into the ground or from whatever place they crawl or climb out of. You are guided and informed at the start and in between levels by a father and daughter team who also narrate the story as you go. As previously mentioned this game is very much on rails. There is no free movement involved, and once the pre selected amount of zombies are dispatched then you are automatically moved forward to the next location. You therefore just have your head movements to look around you and a crosshair to position over the assorted zombies. The shooting and reloading is controlled by either the touch pad on the Gear VR or by a compatible gamepad.  On the Gear VR it’s a case of touching the centre of the touch pad to fire and a swipe down to reload. The game does get quite hectic on the latter end of the 15 levels so I found it not as responsive or as intuitive as on a gamepad.

The levels are varied from cellars to churches and jungles to graveyards and while the graphics are on the simplistic and cartoony side they do suit the fun nature of the game rather well and it all moves smoothly on the s7 edge for this review.

The zombies are varied too from huge hulking beasts to fast running zombies and ones which spit poisonous green goo at you which needs to be targeted and shot. They come at you from all sides so a constant look from right to left is needed to sweep the area. There are handily placed flammable barrels to shoot (as in all shooters) and power ups to collect which include improved firepower and slowing down the action. The original gun you start with has unlimited ammunition but you can pick up machine guns and shotguns which have a limited supply before reverting back to your starting pistol. 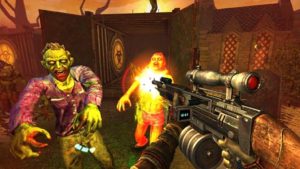 Up close and personal with the machine gun!

On reviewing, Pixel Toys have released a further set of free levels with the promise of more to come so the games value has now increased even more.

This is certainly one of the better shooters on the Gear platform, highly enjoyable, has a few jump scares and one which you will be returning to regularly. At the end of each level you are presented with your score on an overall leader board and do even more incentive to replay the levels are there.

What would I pay? $9.99 is the perfect price point for this, with more missions now included as well as plenty of returning plays for its fun gameplay.