Let me start by saying that if you like the idea of ripping apart hundreds of terminator-esque robots with your bare hands then you’re in for a good time.  I was glad to see this was free with my Rift + Touch as it shows off what the Rift is capable of!  You’re thrown into a world where robots are in every household and they’ve spent too much time watching cat films on the internet and having gone insane and it’s your job to recall these rogue bots, by any means necessary. 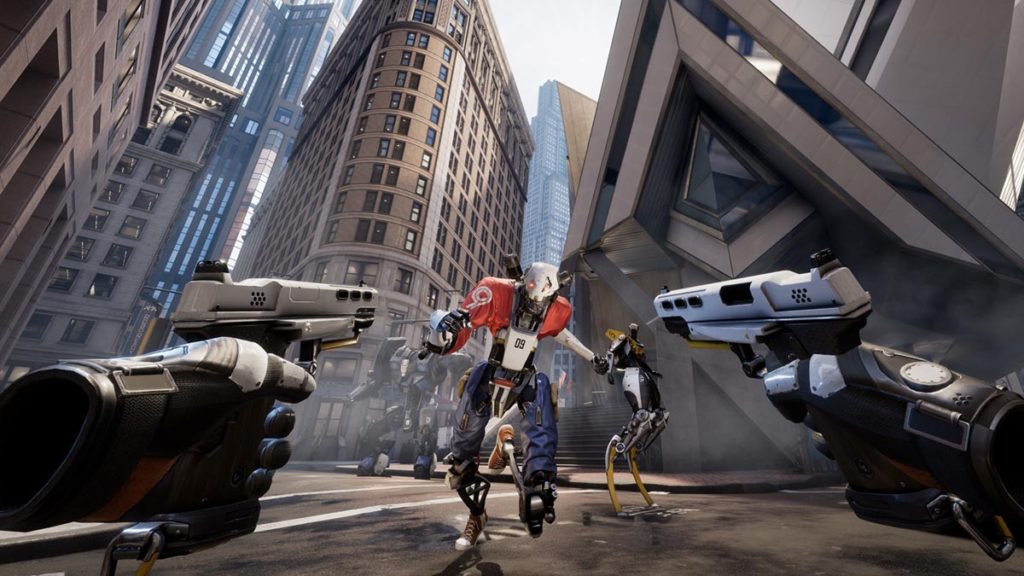 The enemy is unrelenting and dangerous.

The action comes in the form of an arcade style wave based Melee/Shooter solo campaign with various types of play throughout each level.  Destroy (kill everything that moves), Collect (grab the nearest rogue bot and send him flying into a vacuum into space or the nearest Robo-Ready lab for study), Defend (defend a beacon long enough for it to neutralize every bot in the area), or Boss fights with rockets flying at you only to be caught and thrown back(that’s right I said you get to throw rockets with your hands…err controllers). The game keeps the action flowing quickly, with the exception of a few stray robots who hang back, not attacking and dragging out the wave re-spawns, but that only happened to me on a few occasions. The boss fights are a bit repetitive but the robot personalities kept me entertained.

The game uses teleportation for movement which I am not a huge fan of.  However, it’s still preferable to being stuck standing still in a box like many other VR wave shooters. Charge in and go nuts or put your back to a wall and hold them off, it’s your choice. I like using robots as bullet shields as it offers some added protection and just made me feel like a badass. There is a good combination of melee and shooting combat, but I would have loved to wield some weapons dedicated specifically to melee,  not that I don’t enjoy ripping apart the AI horde with my bare hands, because I did! 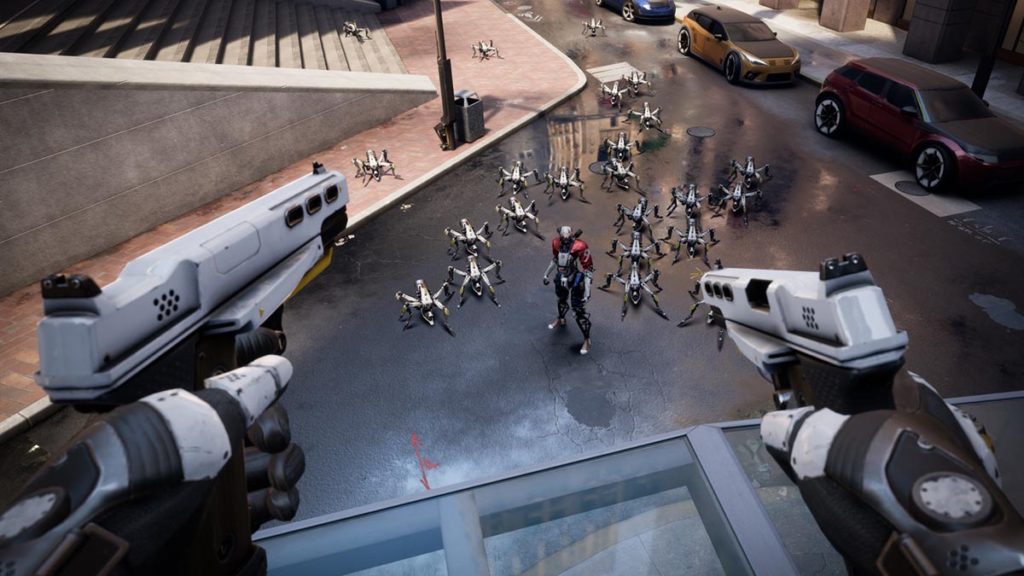 How menacing does this look?

You start out the game with a pistol but soon unlock a revolver, shotgun, and a laser rifle all with their own upgrades.  I felt this could’ve used a few more weapons but appreciate that what they gave you was upgradeable.  This added to replay value as you had to earn stars by completing missions while achieving a side goal like taking no damage or just getting a really high score to unlock new parts. Upgrades start out with your basic extra ammo, laser sights, and piercing rounds, but you eventually unlock weapons that explode when you reload or turn your shotgun into a rocket launcher.

The game looks amazing! From the moment that first rogue bot fired a shot and had me dodging back matrix style, I was blown away by the visuals.  The boss fights had me ducking, side stepping, unloading every weapon, throwing punches, and ripping robots to pieces all while being surrounded by rockets, bullets, laser blasts, and robot parts flying everywhere around me.  Every time I ripped off a body part I gleefully enjoyed watching small metallic parts and sparks from the wires where the head or arm used to be.  This all has me drooling at what’s to come in the future for VR.  Being able to immerse myself into a story, and to be a part of it has so much potential. 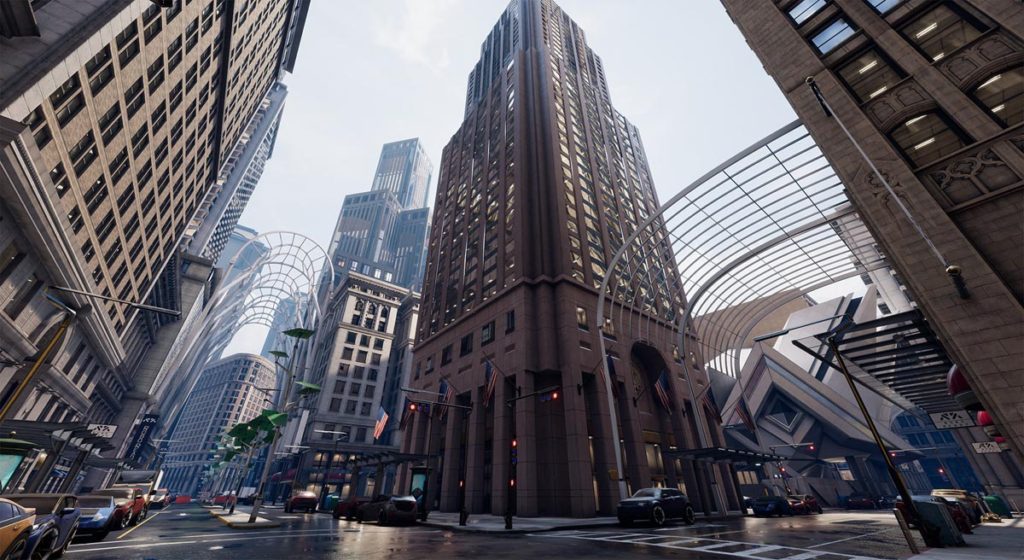 The music is perfect for the style of game it keeps you pumped and gets moving. With hits like “Shooty Shooty Gun Hands”, the music fits perfectly with the cheesy one liners from the various robot AI in the game.  The sound effects are great and when you hear a gun going off behind you or of a bullet flying by your head I challenge you not to flinch.

The most noticeable omission is multiplayer.  I feel the game could have been aided by adding a multiplayer campaign and versus as an option, as well as a few more levels and bosses with a way higher difficulty.  Don’t get me wrong, I love dodging bullets matrix-style as much as the next guy, but it feels more like a drawn out demo rather than a full fleshed out game.  Maybe if we are lucky we will see some updates to it in the future.  Still ,this is a can’t miss title for the rift and a must play for anyone with the headset!

What would I pay? I would say $14.99 is closer to a fair price. If they added a few more cities, robot types, bosses, weapons/upgrades, added co-op campaign and vs. I’d easily drop $60 and tell my friends to do the same. That being said it was a great move giving this away with the Rift + touch.